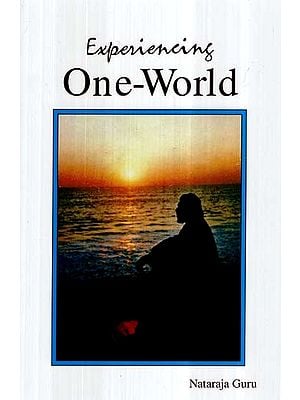 Is ‘One World’ a Utopian idea? Or just a dream in a world which today more than ever before stays riven by parochial, deep-rooted barriers : nationalistic, ethnic, religious, linguistic and many other, leave alone a whole diversity of divisive ‘isms’? An eminent exponent of Vedantic philosophy here examines this question afresh to suggest that the one-world dream could become a reality, if Man only learnt to cultivate the unitive vision.

Essentially a vital part of Nataraja Guru’s globally wide educational programme, Experiencing One-World seeks to evolve “one-world consciousness” that tunes Man to look beyond the trees to stars to run on his mind to world fraternity, and to discern the language of audiovisual arts and the charm of poetry - as for instance is manifest in the world of architecture and music.

Spelling out Nataraja Guru’s view of One-World that embraces his long-contemplated perspectives on one world government, one-world economics, world education, one religion, unified sciences and a language of unified sciences, the book highlights the specialties of well-groomed unitive consciousness of a world citizen, who wishes not only to restructure the existing scheme of things, but also to see mankind live a better life - and with dignity.

Nataraja Guru, the direct disciple of the great philosopher-poet-yogi Narayana Guru, studied at the Sorbonne (Paris), specializing in Educational Psychology. And his D. Litt thesis : Le Facteur Personnel dans le Processus Educatif, written under the guidance of Henri Bergson won high critical acclaim. In 1923 he founded at Varkala, Kerla, Narayana Gurukula : a spiritual school patterned on guru-sisya-parampara which today has branches all over South India and extends beyond to Singapore Europe, USA, Australia and the South Pacific. Besides his translations and commentaries on Narayana Guru’s works, he has written on wide ranging subjects that reflect a correlation between science and mysticism which in turn have made an epochal contribution to the advancement of philosophic thought. Indubi-tably, Nataraja Guru was a brilliant exponent of Advaita Vedanta. And more than that an absolute lover of humanity, invested with unitive consciousness.

Seeing the parochial and clannish loyalty of the people in India in general and Kerala in particular, Narayana Guru advised his disciple Natarajan to move to a distant place where the mental clime was not infected by the relativistic vested interests of castes and clans. The disciple choose Sorbonne in Paris for the completion of his higher studies and to begin his mission of bringing all the major interests of man to a global appraisal of values and appreciating the collective effort of humanity to live a better life.

Nataraj a Gum had the great fortune to have a father who was devoted to Narayana Guru, even before he was born. The Gum gave great attention to steer the mind and spirit of young Natarajan. He evinced his interest in Natarajan’s progressive educational formation which came providentially in a graded manner. After his geological studies, he moved to biology especially zoology, and then to educational psychology in which he took his doctorate at the Sorbonne. Up till then, Narayana Gum’s guidance and inspiration was with Nataraja Gum. With the one world vision of Narayana Guru, Nataraja Guru familiarized himself with all the great people of his time - poets, philosophers, scientists and educationalists. He came into intimate contact with Henri Bergson and was much influenced by Jean Jaques Rousseau.

After teaching in the International Fellowship School in Geneva, where Rousseau was still considered as ‘The citizen of Geneva’, the Gum returned to India to share his wisdom with the students of his own country. It was at that time John Spiers came to him as a camp-follower and helped him in all his literary works. The Gum had a programme in his mind of giving a full course in one-world-teaching, beginning with an integrated science of’ the absolute in which he brought together all the loose ends of the conclusive teachings of religion, science, philosophy, psychology, art and literature.

The foremost need to evolve a one-world-people is to spell out the philosophy of unitive vision, for which Narayana Guru’s classic, Darana Maid, gave him the fundamentals. Based on that, the Guru wrote his Integrated Science of the Absolute in three volumes. The major guidelines for thinking in terms on one-world lay dormant in two great areas where human interests are acute. One is the physical needs, so Nataraja Guru saw economics as a basic requirement of understanding and training to meet one’s own neighbour as part of the world corporation of sharing the amenities that one gets from nature. That led him to write Towards an One World Economies.

To appreciate One-World Economics, seeds of a new attitude is to be sown in children, to look upon the world as his country. A child, like a seed, has to grow on earth, nourished by nature’s favours, and his aspirations should be raised to be tall enough to look beyond the trees to the stars. The educational theory of Nataraja Guru therefore touches the alpha point of necessities and the omega point of higher freedom.

Once the young mind is turned on to world fraternity, his natural environment should be a world of socio-political and geographical familiarization with the world where the man at the farthest post is looked upon as a brother. For this, a new manifestation was needed. That made Nararaja Guru turn to World Government. with Garry Davis and his crew as activists in the field as a band of world citizens.

It is at this stage that Nataraja Guru felt the need to have a unified scheme of a common language for scientists and the bards or spiritual seers. He wanted the ancient and the modern, the physical and the spiritual, and philosophies of all outlooks to be conversant with the language of audiovisual arts and the charm of poetry. He found clearly that the impartial reasoning that brings certitude to all lies in mathematics and the field of its popular application is in the world of architecture and music.

Such was the ambition of Nataraja Guru as an absolute lover of humanity.

I am sure this book will highlight the main features of the well-groomed unitive consciousness of a world citizen who wishes the world to be educated to enhance the dignity of man. Living in the warmth of universal fraternity we solicit everybody’s cooperation in this noble endeavor of restructuring our world.

This book is a complication of four books and several articles written by Nataraja Guru over a period of about twenty years. Serialized in the English magazine values from Narayana Gurukula, Kaggalipura, Bangalore South, these books and articles are part of a programme of educating the public which began with Narayana Guru’s earlier attempts to focus people’s attention on evolving a one world consciousness. 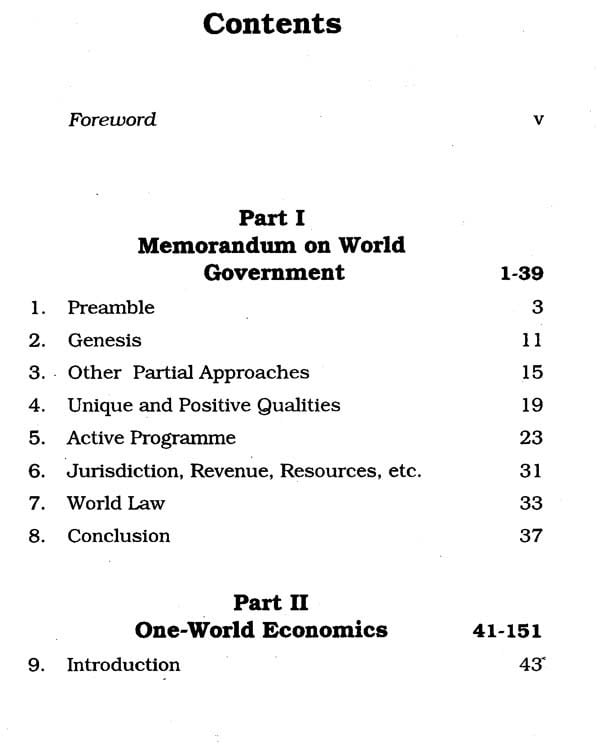 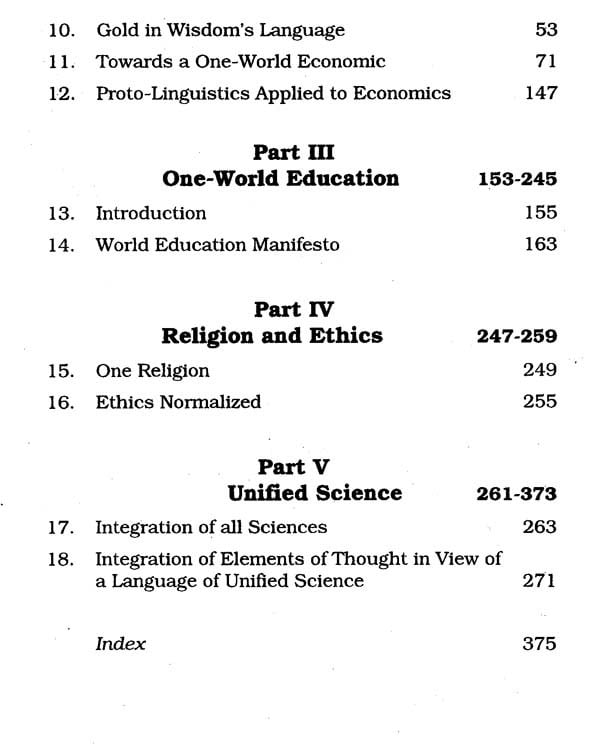 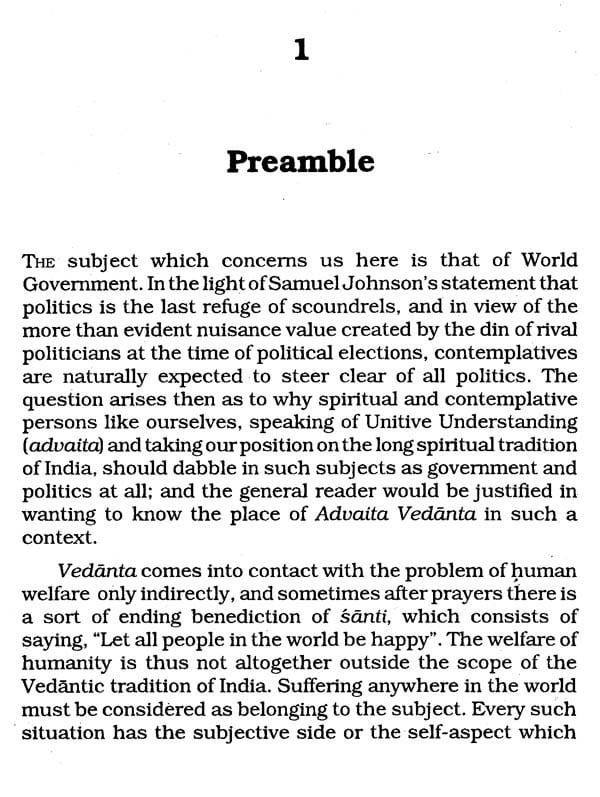 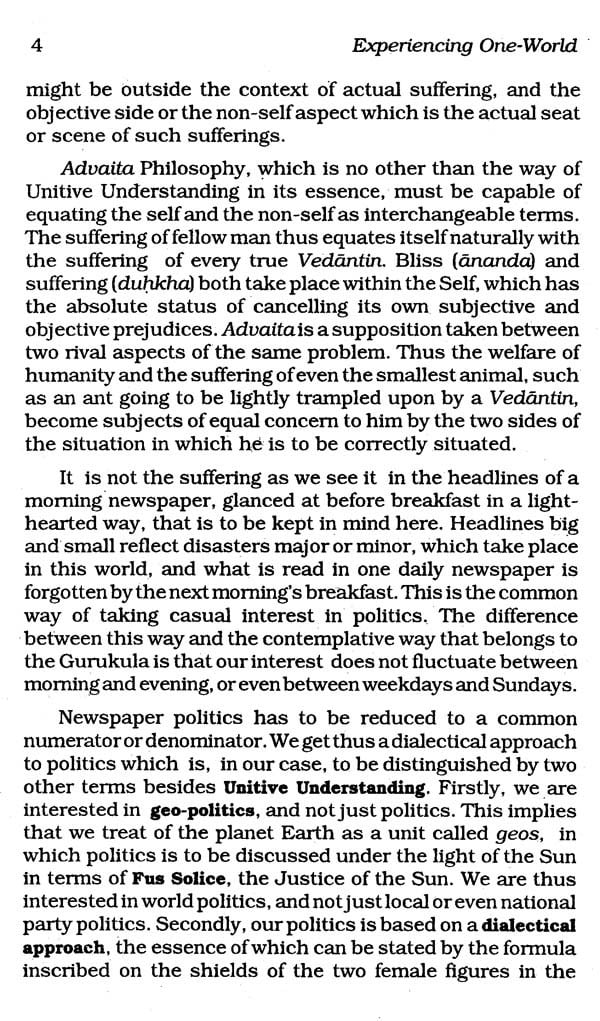 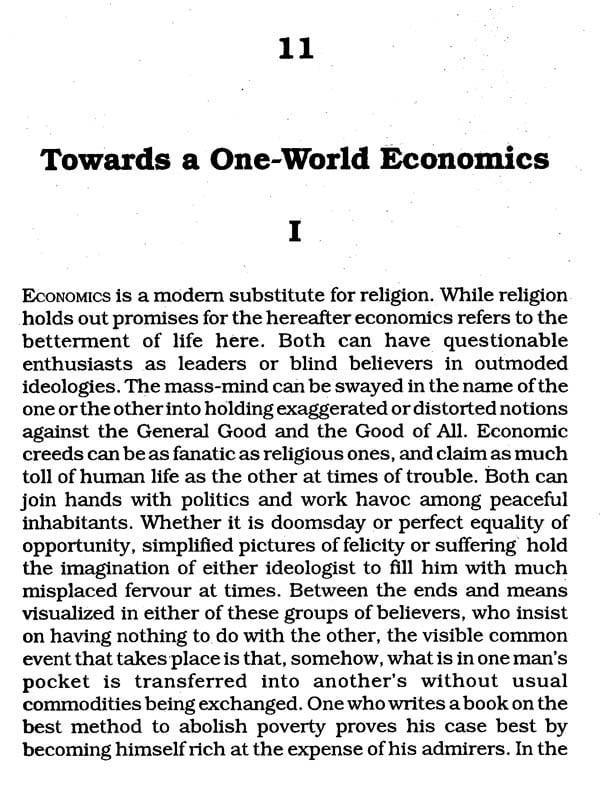 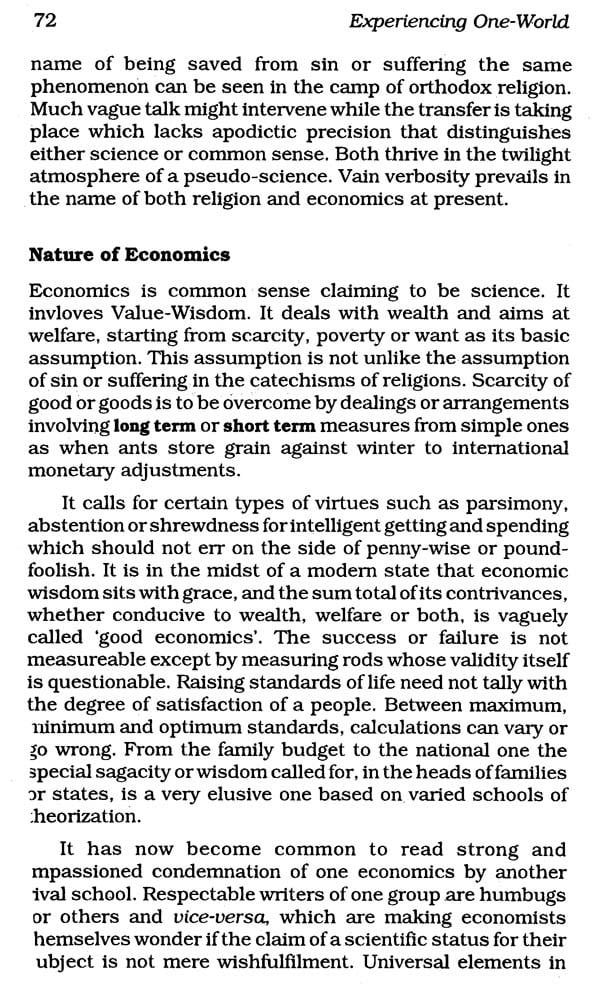 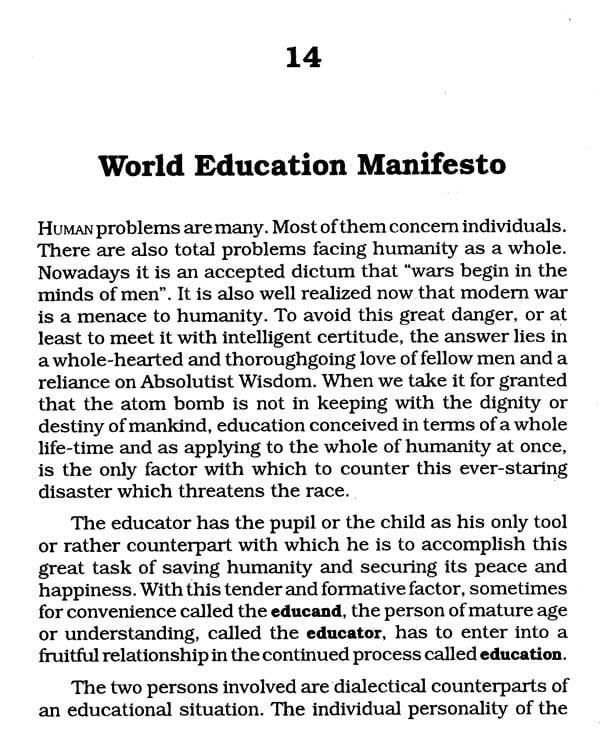 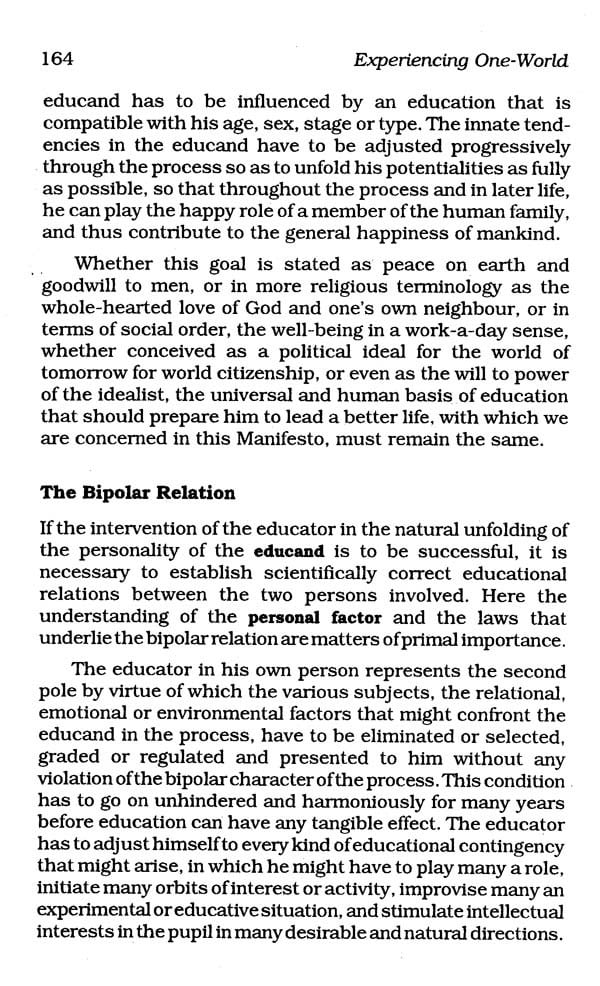 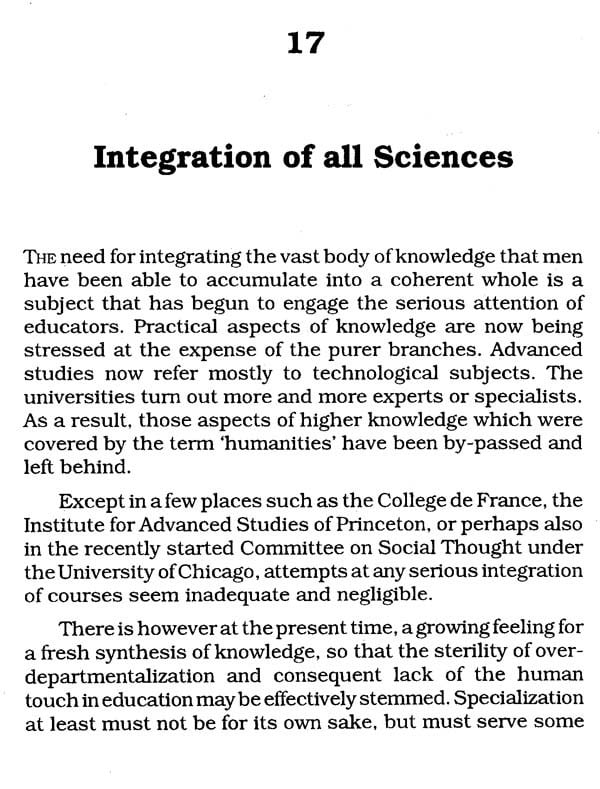 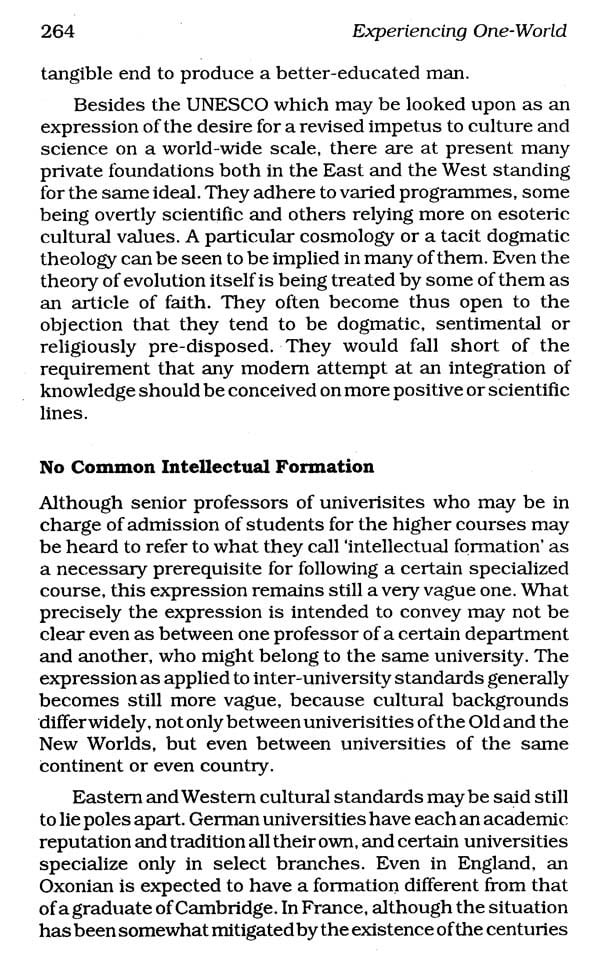