FREE Delivery
$52
Quantity
Ships in 1-3 days
Notify me when this item is available
Preface
"I was reading the dictionary. I thought it was a poem about everything".

James A. H. Murray, the Chief Editor of the world renowned Oxford English Dictionary on Historical Principles, while delivering his speech on The Evolution of English Lexicography in the Sheldonian Theatre, Oxford on June 22, 1900 said at the outset thus:

"When the 'Act to facilitate the provision of Allotments for the Laboring Classes' was before the House of Commons in 1887, a well-known member for a northern constituency asked the Minister who had charge of the measure for a definition of the term allotment, which occurred so often in the Bill. The Minister somewhat brusquely told his interrogator to 'look in the Dictionary,' at which there was, according to the newspapers, 'a laugh.' The member warmly protested that, being called upon to consider a measure dealing with things therein called 'Allotments', a term not known to English Law, nor explained in the Bill itself, he had a right to ask for a definition. But the only answer he received was 'Johnson's Dictionary! Johnson's Dictionary!' at which, according to the newspapers, the House gave 'another laugh,' and the interrogator subsided. The real humor of the situation, which was unfortunately lost upon the House of Commons, was, that as agricultural allotments had not been thought of in the days of Dr. Johnson, no explanation of the term in this use is to be found in Johnson's Dictionary; as, however, this happened to be unknown, alike to the questioner and to the House, the former missed a chance of 'scoring' brilliantly, and the House the chance of a third laugh, this time at the expense of the Minister. But the replies of the latter are typical of the notions of a large number of persons, who habitually speak of 'the Dictionary,' just as they do of 'the Bible,' or 'the Prayer-book,' or 'the Psalms'; and who, if pressed as to the authorship of these works, would certainly say that 'the Psalms' were composed by David, and 'the Dictionary' by Dr. Johnson.

I have met persons of intelligence who supposed that if Dr. Johnson was not the sole author of 'the Dictionary'--a notion which, in view of the 'usefulness' wherewith, in recent times, Dictionaries, American and other, have been pressed upon public notice, is now not so easily tenable--he was, at least, the 'original author,' from whose capacious brain that work first emanated. Whereas, in truth, Dr. Johnson had been preceded by scores of workers, each of whom had added his stone or stones to the lexicographic cairn, which had already risen to goodly proportions when Johnson made to it his own splendid contribution.

For, the English Dictionary, like the English Constitution, is the creation of no one man, and of no one age; it is a growth that has slowly developed itself a down the ages. Its beginnings lie far back in times almost prehistoric. And these beginnings themselves, although the English Dictionary of to-day is lineally developed from them, were neither Dictionaries, nor even English. As to their language, they were in the first place and principally Latin: as to their substance, they consisted, in large part at least, of glosses. They were Latin, because at the time to which we refer, the seventh and eighth centuries of our era, Latin was in Western Europe the only language of books, the learning of Latin the portal to all learning".

The English lexicography has thus evolved from glossary tradition into reference science tradition of the modern age and has been making its impact on other languages all over the world.

The present English-Tamil Dictionary compiled during 1959-1965 based on the 1958 edition of the Oxford English Dictionary (Concise) under the dynamic leadership of Professor A.Chidambaranatha Chettiar, popularly known as A. C. Chettiar was published in three volumes in 1963, 1964 and 1965 respectively and in a single volume in 1965 by the University of Madras. It has been reprinted in a single volume in 1977, 1981, 1988 and 1992.

This dictionary cannot claim to be up to date. For that matter, no dictionary can claim to be up to date, as the language has always been dynamic. However, it is a universally acknowledged fact that this dictionary is rich in chaste Tamil and has been useful for coining new words and technical terms. Also it has been serving as an indispensable aid to translation from English to Tamil. It has been a best seller. It still enjoys an enviable status in Tamil-English bilingual lexicography.

Considering the utilitarian value and classicalness of the dictionary and demand for it from the academics and public, it has been decided to reprint on the model of its 1992 reprint which was appreciated for its handy in size and light in weight.

My appreciation is due to Dr. Oppila. Mathivanan, Director, Publications Division and M/s Orient Color Crafts, Sivakasi for bringing out this volume elegantly. I am glad to commend this work to the wider attention of the academic world and public alike.

I wish to offer my congratulations to the Chief Editor of the English-Tamii Dictionary and his Staff who have in a remarkably, short period accomplished this task of publishing the Third Volume of the English-Tamil Dictionary The first volume of the Dictionary was issued on the 26th January 1963, and the third and last volume is to be issued on the 3rd July 1965. I am sure that this progress would not have been maintained but for the devoted and sustained endeavors of the Chief Editor, Dr. A. Chidambaranatha Chettiar, supported by the entire staff.

A dictionary of this kind will be useful from many points of view, and I am sure that this will serve as a stimulus to the understanding of Tamil and English in their relative spheres. It was on a resolution adopted at the meeting of the Senate of the University of Madras on the 27th October 1955 that this venture was thought of. The University is deeply grateftil to the University Grants Commission which undertook to bear the cost of the preparation and publication of this dictionary to the extent of 66 per cent of the total cost in the first three years. The gratitude of the University is due also to the State Government for the kind help rendered to the University. 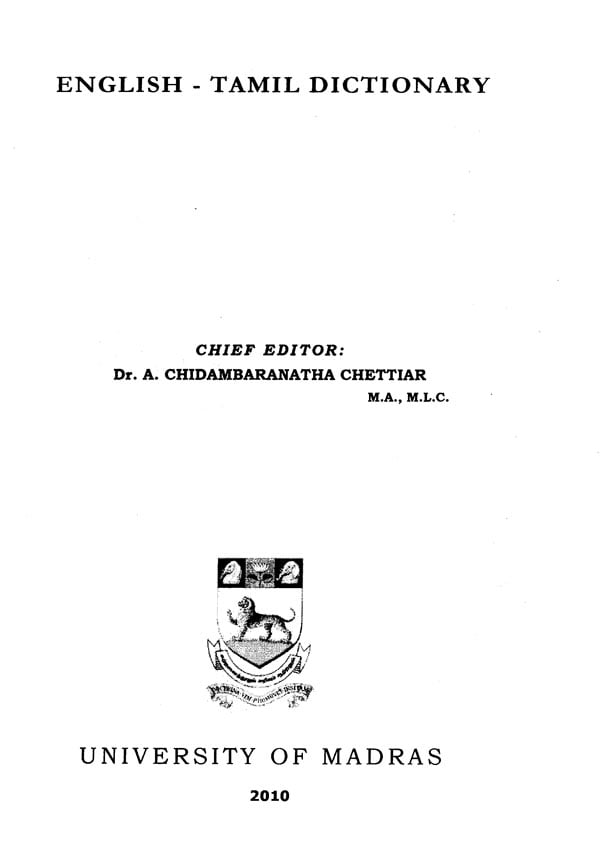 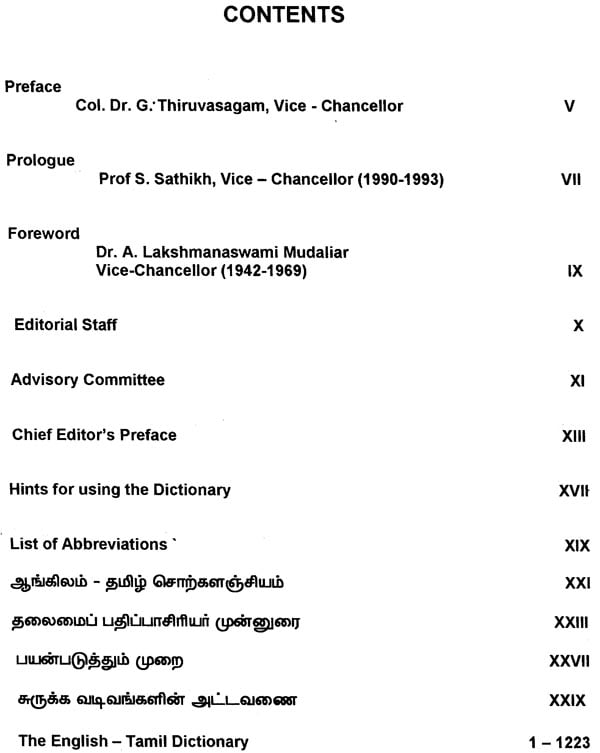 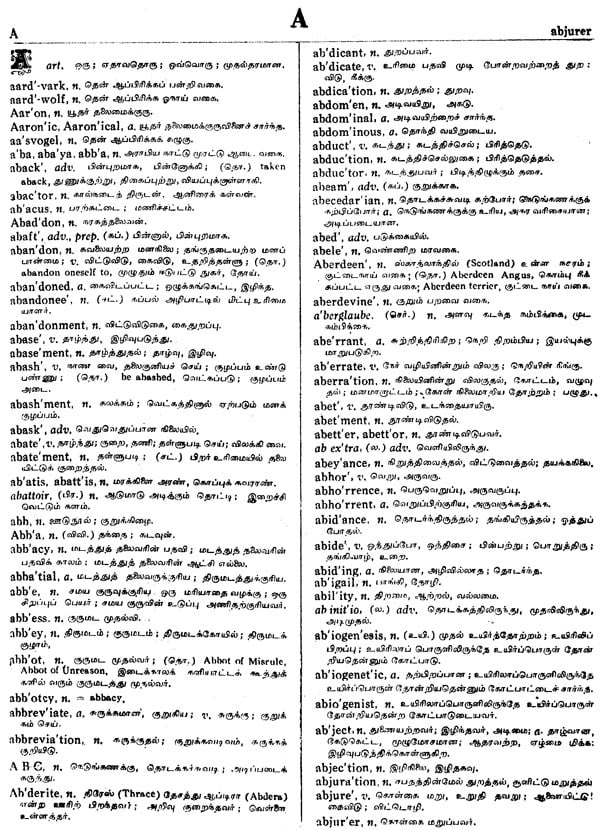 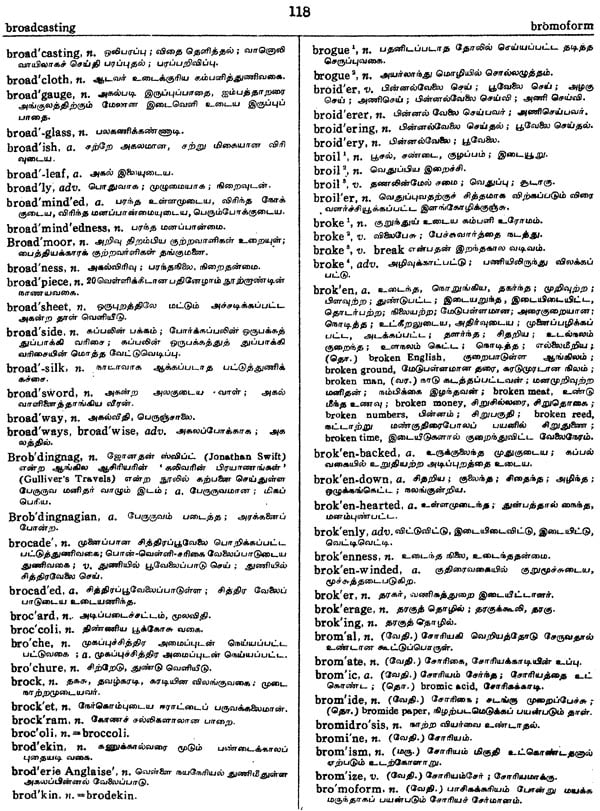 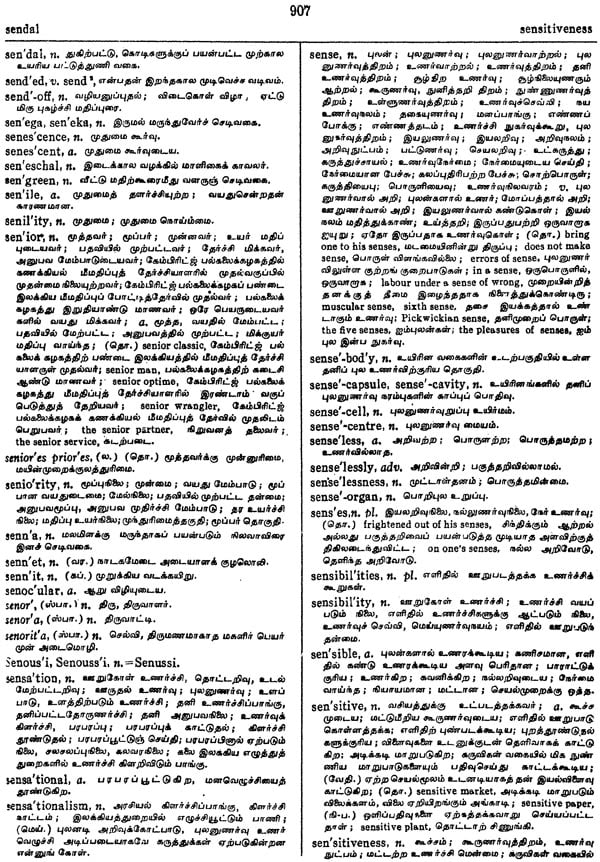 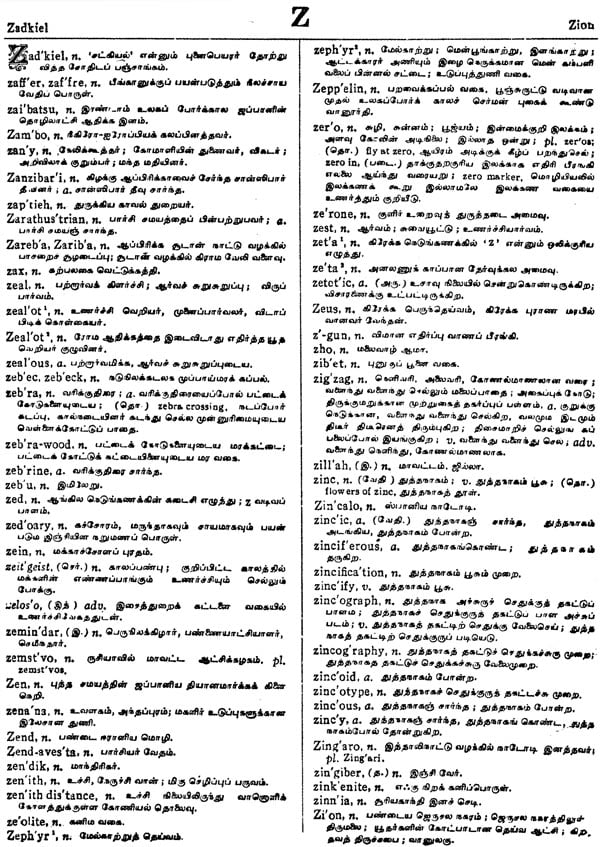 The Classical Age of The Tamils
By M. Arokiaswami
$29
FREE Delivery