Here is a reprint of the English-Pali Dictionary by A.P. Buddhadatta Mahathera published long ago by the Pali Text Society in Roman script. This publication was then considered a notable event in the life of the Society, for it was a great improvement on a similar earlier work by Venerable W. Piyatissa whose usefulness was reduced for the English-speaking readers by the Pali words being given in Sinhalese script. This is a considerable enlarged form of a concise English-Pali Dictionary compiled by the present author during the Second World War. The author has coined many new words and has given more than one Pali word for some English verbs which do not exist in the ancient languages like Pali. This dictionary, though not an exhaustive one, has proved much useful to the scholars of the Pali language as it presents well chosen material in a single volume of a manageable size.

That this present English Pali Dictionary has been compiled by the Venerable A.P. Buddadatta Mahathera, Agga Mahapandita will guarantee the scholarly way in which it has been handled. For he is a grammarian and well known as the author of several Pali grammars written both in Sinhalese and in English and moreover he has edited Sammoha vinodani Saddhammapajjotika (3 Vols) Buddhadatta’s Manuals (2 vols) for the Pali text Society as well as other Pali works published in the Society’s journals.

A dictionary of the entire English language each word with a Pali equivalent would perhaps be impossible and it would certainly not have been desirable since any such compilation would attain inordinate length whereas what is more needed is the presentation of as much useful and well chosen material as possible in one volume of a manageable size. It would be impossible, for Pali could not be expected to produce words, for example for plants and birds of a non-Asian habitat. So there are no entries for such things as ‘dandelion ‘, ‘ buttercup ‘ ‘ honey-suckle ‘ or ‘ black- bird , so familiar to English people. ‘Tern ‘does appear, although not as a bird but as a set of three, a triplet. Hawk ‘, ‘kite and owl ‘are however included as well as other birds known also in Asia. Nor have these escaped the notice of the compilers of the Pali Canon and Commentaries, where they are not infrequently referred to. Pall equivalents were therefore already at hand.

But if Pali cannot coin all words, the Venerable Buddhadatta has been indefatigable in coining a great many, particularly perhaps for current English anatomical, medical and botanical terms, for other scientific words and for modern inventions, such as ‘emplane (verb), ‘telephone’ and ‘telegram’, and for which Pali proves very well adapted. This is not altogether surprising for, although it has long been a static language, it yet covers a wide range of thought, enriched by hundreds of narrative stories on a variety of topics and by a multitude of similes drawn from everyday life and things.

Another class of omissions that had to be made concerns certain, but not all, words that are narrowly ecclesiastical ‘ in usage or classical ‘ in reference, such as ‘ Chasuble ‘ and Doric ‘ (architecture), and which fall outside the scope of Pali thought.

On the other hand words are included that would not normally find a place in a purely occidental Dictionary. We may give as examples ‘ Tooth-relic ‘ and ‘ false view ‘, words which, in their technical sense, are not of the common stock of European thought, but they have a decided technical meaning in Buddhist literature. As it is hoped that one of the main uses of this Dictionary will be to provide a further instrument for the study of Pali literature and language, words such as these clearly could not have been omitted; they are part of the very fabric out of which this literature and language are built.

All first attempts must in time be superseded, as the Venerable Buddhadatta has intimated in his Preface. But that time will not come immediately. For even although everyone may not agree with all the Pali equivalents given whether they have been freshly coined or composed form words already in Pali Usage, I yet believe that the great majority of these equivalents will be found to be precise and apt. I also believe that this English Pali Dictionary which I hope will meet with every success is both on account of its own intrinsic value and because it is breaking new ground an important and welcome contribution to the field of Pali studies.

In the preface to my concise Pali English Dictionary which was published in 1949 mention was made of the fact that I was preparing an English Pali Dictionary. I compiled a concise English Pali Dictionary during the second world war. While its printing was delayed through more than one obstacle there appeared an English Pali Dictionary by the Venerable W. Piyatissa nayakathera in the latter half of 1949. in this work the Pali words are given in Sinhalese script the gender of the nouns is not defined by designations but they are given with their different case endings of the nominative like rahado kanta, pallan and so on. The adjectives also are given sometimes with the masculine case endings but occasionally with the neuter case endings. For instance lacteal, lacunal appear of page 365 there. An adjective in Pali takes all forms of gender according to the gender of the qualified substantive. To cite adjective in that manner would naturally lead to confusion in the student’s mind. They should have been given without any case endings.

Although there are many short comings in his work the Venerable Elder it to be congratulated of embarking on such a bold venture in spite of his poor health.

Under these circumstances the necessity of a well arranged English Pali dictionary in full Roman script was still there. Therefore my friends urged me to re-write my work on an enlarged scale which I agreed to do. Thus this work has become on English Pali Dictionary of considerable size. To cover the whole English languages is an enormous task and find out Pali words for numerous modern concepts is extremely difficult if not impossible. I had to coin many words for new things and sometimes I had to give more than one Pali word for some English verbs which do not exist in the ancient languages like Pali. As this is only a first attempt it will not be surprising if anyone finds short comings here too.

In compiling this work I benefited form the preliminary advice and help offered by O.H. de. A. Wijesekara, M.A. Ph.D. Prof. of Sanskrit University of Ceylon. In the course of my work I had to request Miss I.B. Horner M.A the secretary to the Pali text society of London and the well known translator of the Vinaya texts to help me in the task. She gladly consented to read the proofs and correct where it was necessary. I received much help from her in defining the exact meaning of some English words and in deciding which words are now not in use though they still appear in some English dictionaries. So I removed many archaic words some of which are often found in the work of the Venerable Piyatissa. I am sorry to say that I could not carry out all of her instructions as I could not something’s get her corrections in time owing to my being away in Burma for long periods.

The printing of this volume has been done by Messrs Colombo apothecaries Co. Ltd. With much care for which my thanks are due to them.

It should be noted that Pali verbs cited here are given in the third person singular of the present indicative. Their respective past Participles appear after such verbs. In giving the past participles it was found necessary in some instances to give them in compound form with the addition of certain nouns this need arose when there was no single Pali word exactly parallel to the English verb. For example the English verb forge is translated here as kutavidhanana karoti and its P.P is given askatakutavidhana. Actually but as explained above it was found convenient to place these too in the category of the past participles.

There is some difference in defining transitive and instransitive verbs in the two languages. For instance forget in given as a v.t. in English dictionaries but the Pali verb of the same meaning is reckoned as an intransitive. It is to be noted that the definition of verbs given here is according to English dictionaries and not after the Pali grammars. This variance exists only in very few instances.

In the Pali English Dictionary of the P.T.S. stems of some Pali nouns such as satthar pitar and Brahman are given with consomatal endings. I did not follow this method as none of the Pali grammarians has accepted it. They have given them as suthu pitu and brahma respectively.

The secondly derivatives ending in ta such as dakkhata dhammikata have their neuter forms ending in tta or ttana but for the sake of brevity only one form either if ta or tta is given in one place.

A New Course in Reading Pali

A HISTORY OF PALI LITERATURE

Click Here For More Books on the Pali Language 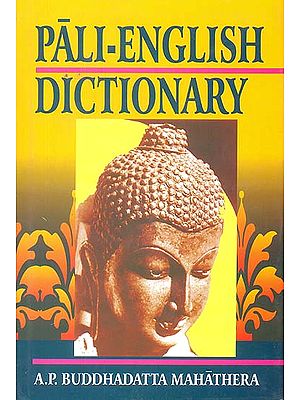 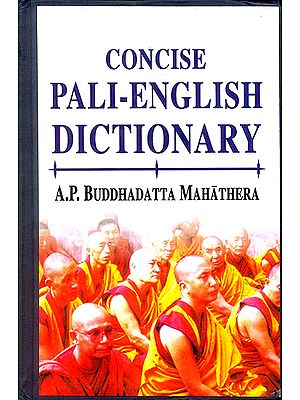