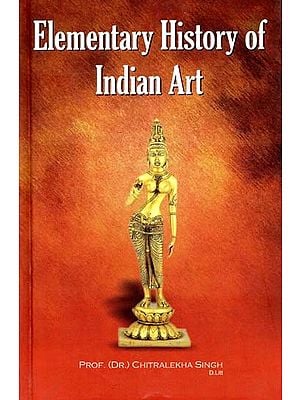 Shipped to 153 countries
About The Book

This book is an elementary book and is intended to make the reader conversant with the arts of India. Art is a very wide term, representing as many as arts, in practice, since ancient India. Its history requires a voluminous encyclopedia, extending over a period of more than 62,000 years. Historians, archaeologists, artists and mythologists have made, time to time, contribution to its narration and illustrations. For the purpose of this elementary boo, meant to be studied by young students entering in the field of art, only three main arts have been selected viz architecture, sculpture and painting. A few examples from each one of them have been chosen to enlighten the vision of the reader. The first two chapters are of a general nature just to give the idea of "What is Art' and what a student is expected to know about its fundamentals. The next chapter gives a legendary history of art, based on ancient mythological narratives, of which nothing exists to be seen, beyond visual inspection. The rest of the chapters are devoted to the above mentioned three arts viz architecture sculpture and painting. The book will be found as interesting to those readers, who know nothing about Indian art, and is those who wish step into the world of art. Illustration reproduced from various publications are heredly acknowledged with gratitude.

Dr. Chitralekha Singh, born 1945, recipient of Defence Secretary's commendation medal and card as NCC officer (Captain). Gandhi Medal Awardee, DLAAward and Rupayan Achievers. Award 2013 International Who's Who or Professional & Business Women. Carolina (USA), (1988) Honorary member of Advisory Board of American Biographical Institute of USA (1988). (Dr.) Chitralekha Singh is the first woman D.Litt. (Painting) in the world of Fine Arts, Agra College, Agra. She was awarded UGC Research Associate ship minor and major project and short time project of ICHR. She is Founder-Director of Lalit Kala Sansthan, Dr. BR Ambedkar University, Agra and Founder Dean, Institute of Visual Performing Art & Research, Mangalayatan University, Aligarh. Now Dean Humanities Social sciences Fine Arts Yog & Astrology in Mewar University, Examiner of six universities, research guide of four universities and has privilege of 75 Ph.D. and 118 M.Phil. awardees under her expert guidance. Devoted to art, as an artist, she held many solo and group exhibitions, attended many seminars and workshops. Her paintings are in the collection of Bangladesh, Nepal, Sri Lanka, Holland, Germany, Mauritius, Nigeria, Rome, USA and Canada besides in India. Her 40 books have been published so far and more than 15 are under publication. She has visited Italy, Mauritius, China, United States, Canada, Nepal, Pakistan and Sn Lanka to convey the message of peace "Vashudhaiv Kutumbkam' (World is one Family) & World Peace through her pen and brush, Now she is devoting her full time to promote art and culture at her own society 'Chitralekha The Village of Art Society' at Agra & Mewar University, Chittorgarh. Nominee or 'Art Prize' Grand Rapids America September 2014, for painting 'Divya Gyan'

Art reveals line deepest recesses of the human mind and offers a mirror to the Indian soul, as perhaps nothing else does. The history of art is as old as the history of mankind. Them the time, wild life, of hunters, nomads and tribesman, to the developing society upto the present developed and cultural society, art has had its influence and effect on the Socio-Economic aspects of human life. Art reveals the culture of a period and brings out the heritage and cultural development of a nation. Although nothing definite can be said about the earliest inhabitants of India, lent as is generally believed that they were dark negrite indigenous people, till about third millennium B.C. These primitive people were gradually driven southwards and assimilated lay Mongoloid invaders from the North. The race that resulted from Negrite Mongoloid Blood developed the Dravidian or pre-culture of India. Towards the close of third millennium, B.C.