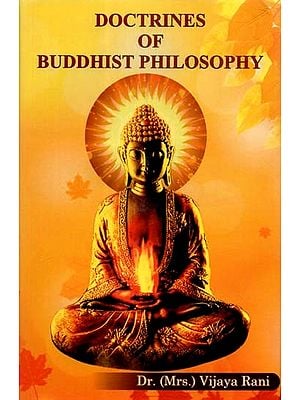 FREE Delivery
$30
Quantity
Usually ships in 10 days
Notify me when this item is available
About the Book
Buddhist Philosophy occupies a very important place in the History of Indian Philosophical systems. Infact Lord Buddha's Teachings are based on logic and reasoning. That's why his teachings were adopted and accepted by everyone whether a common man, a King or a Philosopher. In the present endeavour, the author has tried to present all the important doctrines of Buddhist Philosophy in a simple, lucid and compact manner. Here the various doctrines such as Impermanence and Momentariness, Dependent-origination, No-soul theory, Nirvana etc. have been discussed in detail on the basis of old Buddhist Literature as well as the latter treatises related to the four philosophical Schools of Buddhism. Some important Non-Buddhist-Scholars like Kumarila Bhatta, Vacaspati Misra etc. have also been referred to, wherever required. A separate chapter on Buddhist ways of Yoga has also been added. It is anticipated that the present work will prove to be of great importance for the students, researchers and scholars of Buddhist Philosophy.
About the Author
Prof. Vijaya Rani is a learned scholar of Indian Philosophy, especially of the Buddhist Philosophy and Logic. After completing her Post-Graduation, she did her Ph.D. on an abstruse topic related to the Buddhist Philosophy and Bhāṭṭa Mimāṁsā, under the meticulous guidance of Late Prof. D,N.Shastri and Late Prof. S.N.Shastri, both renowned scholars of Indian and Buddhist Philosophy. She joined the Deptt. of Sanskrit, Pali and Prakrit, Kurukshetra University, in 1977. After holding different positions there, she got retired as the Chairperson of the Deptt. Under her profound guidance, more than 20 Ph.D. and 35 M.Phil. Students completed their research work on different topics. Besides that, she attended and presented research papers in several International and National Conferences. She has to her credit, about 40 Research papers & several Scholarly Books on Indian Philosophy.
Foreword
It gives me great pleasure in writing a few words about the serious work on 'Doctrines of Buddhist Philosophy' by a serious scholar like Prof. Vijaya Rani, who throughout her active teaching career at Kurukshetra University., remained keen in understanding the depth of Buddhist Philosophy and active in teaching her students and researchers the intrinsic values of Bharatiya philosophy and culture.

Buddhism, as already known to the academic world, emerged as a protestant thought and philosophical stream against the Brahmanical system which with the passage of time, had developed certain concepts and religious practices, and created confusion in the psyche of common man. Like Upanişads. Buddhism too emphasized on the pure knowledge of the ultimate Satya discarding unnecessary rites and rituals.

Instead of taking recourse of philosophical and ritualistic complexities, Buddhism prescribed the ethical practices of Sila, Samadhi and prajna. It encouraged rational thinking in place of blind convictions without going to the refuge of any unknown entity. Buddhism accepted the concept of karma and rebirth as already accepted and established in the Santana philosophy and belief system, it discarded the theory of soul transmigration; and emphatically said that rebirth is a result of continuous flux of mind-and-body (nama-rupa) only and there is no role of permanent entity like soul (atman) in it.

In the twelve chapters of the book, the author proceeds with the fundamental concepts of four Noble Truths including the Fight fold Path. Dependent Origination, No-Soul, three Refuges, periodization of the Buddhist Philosophy, various philosophical schools. Momentariness, Law of Action and its resultants, Nirvana. Yoga, Apoba and finally the notion of commonness and so on.

Preface
Lord Buddha is a very unique and divine personality, not only of India, but of the whole universe. He, by his ethical, religious, spiritual, but rational teachings, won the hearts of one and all whether a common man, a saint, a king, or a philosopher. His simple and mind-appealing thoughts were appreciated and accepted by all the great thinkers of his own time as well as of the later period.

At the time of the origin of Buddhism, there were prevailing at least three main streams of thought in India. First, the stream of Brahmanical rituals and sacrifices, secondly, the philosophy of Upanişads regarding the Ultimate Reality 'Brahman' and thirdly, the Nihilistic conceptions like that of Akrīyāvāda, Niyativada, Ucchedvada and so on. There was no rational and logical basis behind them. Common man was in a chaotic and uncertain state of mind. Moral values were declining. In such an atmosphere of the society, Gautama Buddha appeared upon the scene as a great solace to them. His teachings gave a very simple, easily adoptable and peaceful way of life. Four-Noble-Truths, Noble Eightfold-path (Arya-Aṣṭāngika-marga), Theory of Impermanence and Momentariness, Dependent origination, No-soul etc. are the most important doctrines of Buddhism, which were liked not only by the masses, but also by the reputed and most powerful persons of the society. 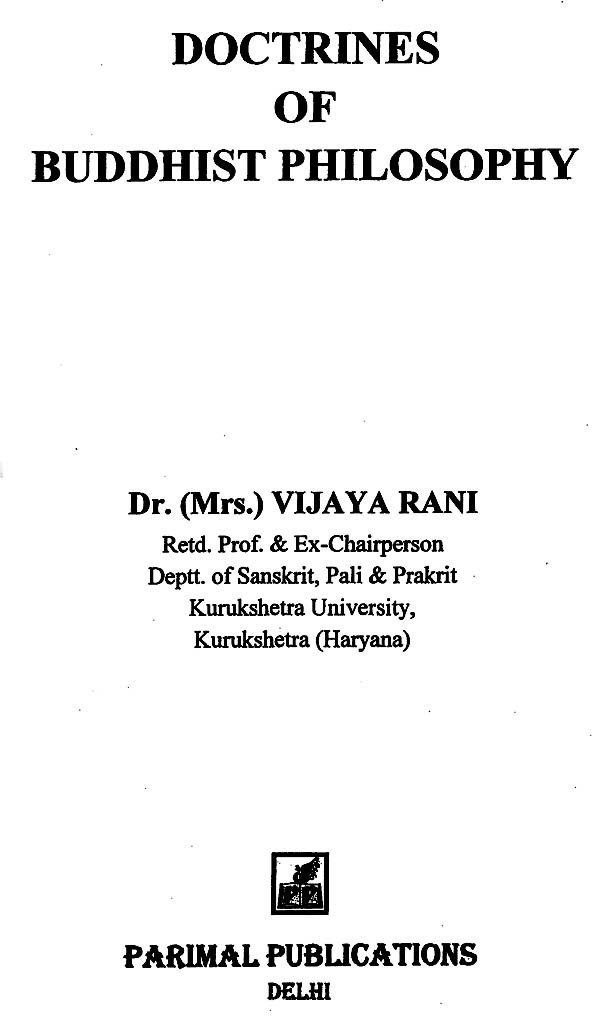 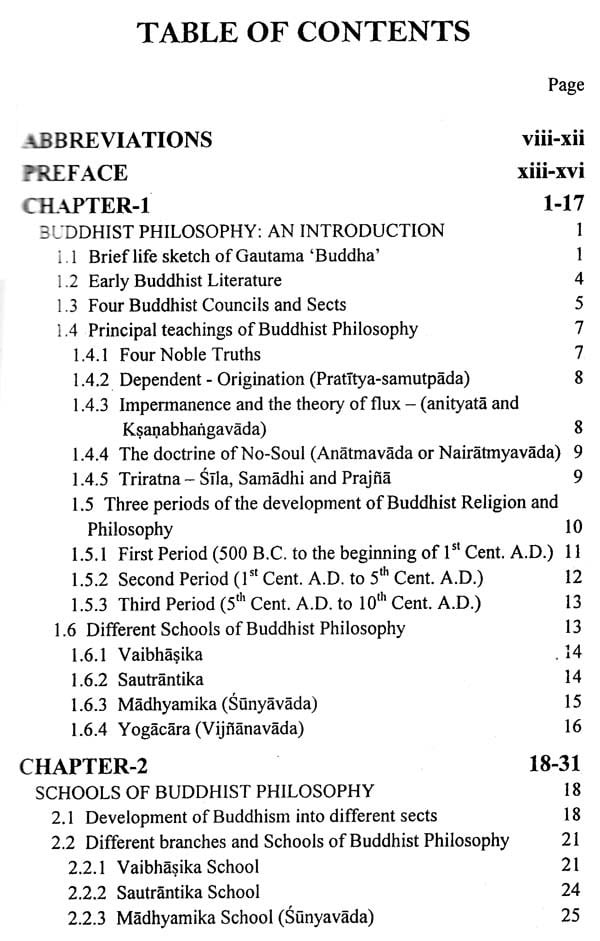 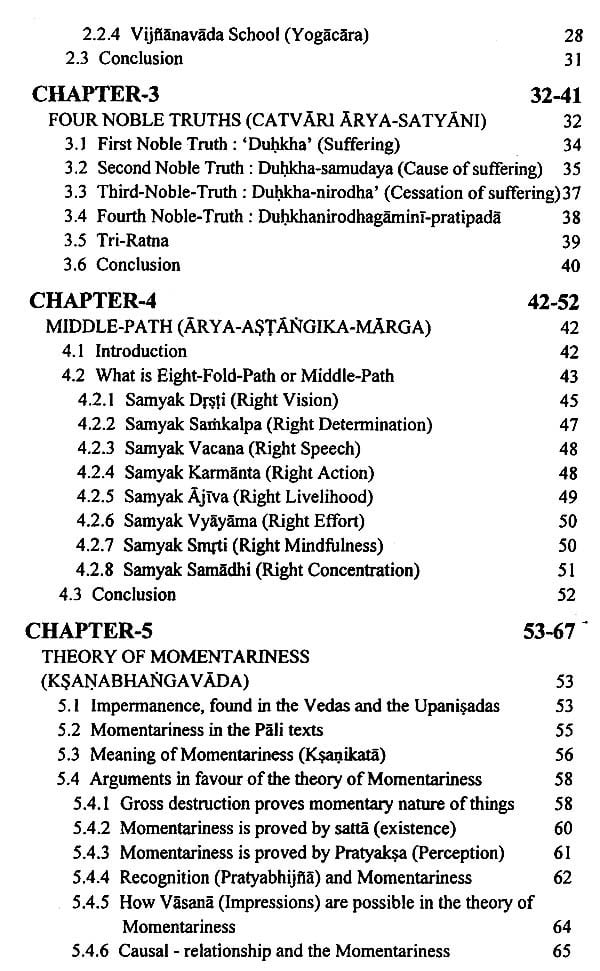 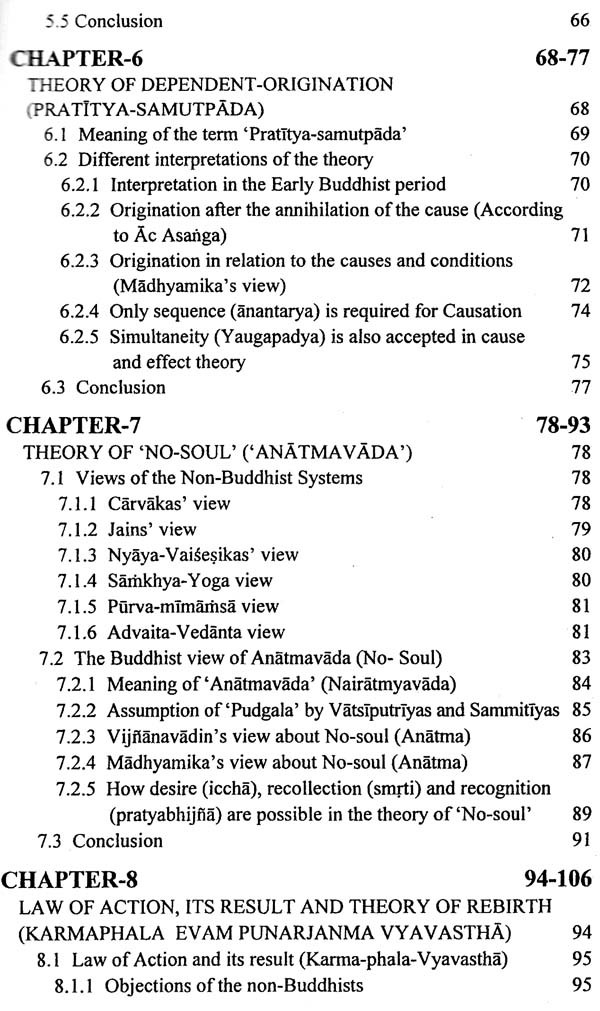 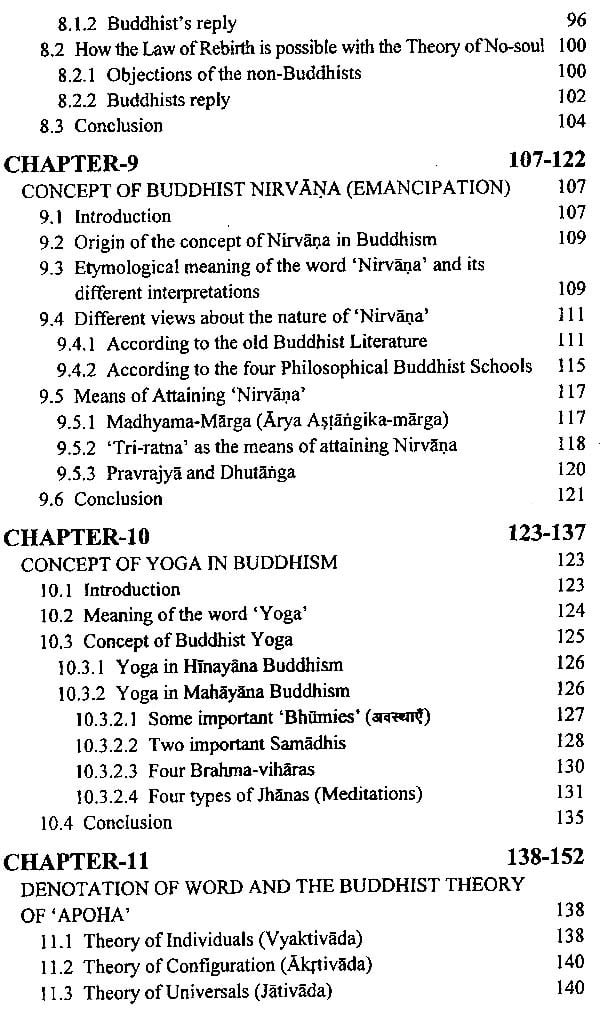 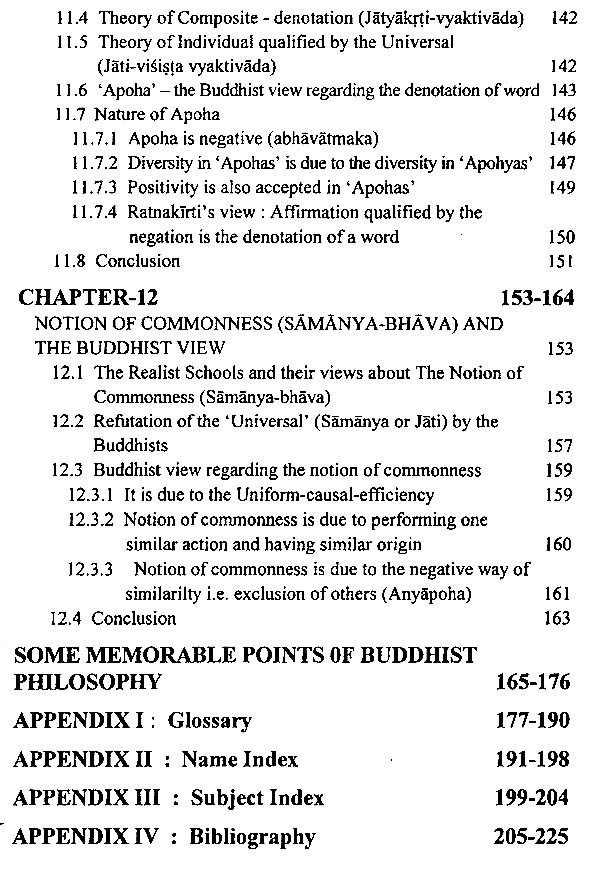 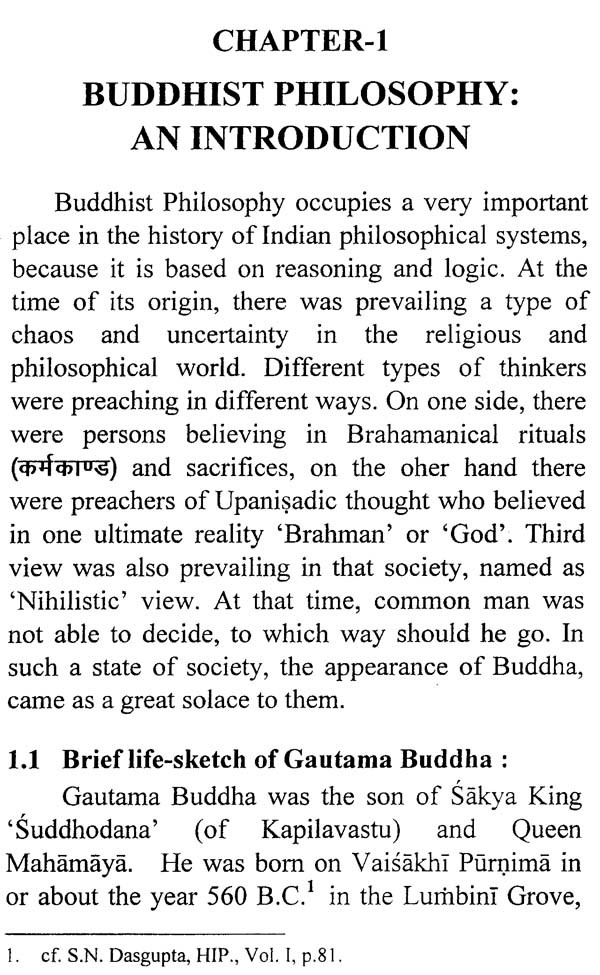 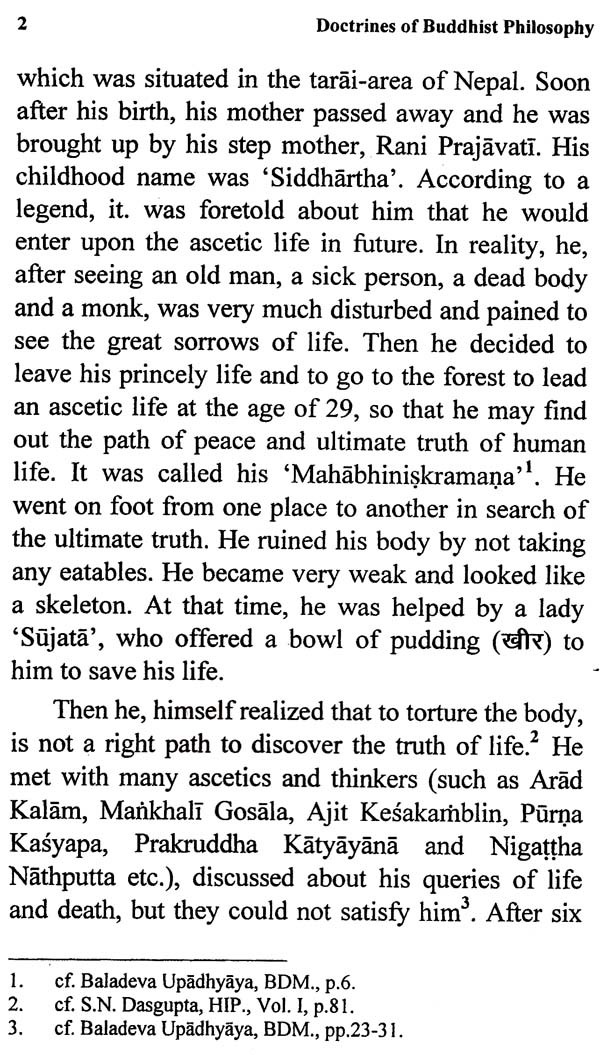 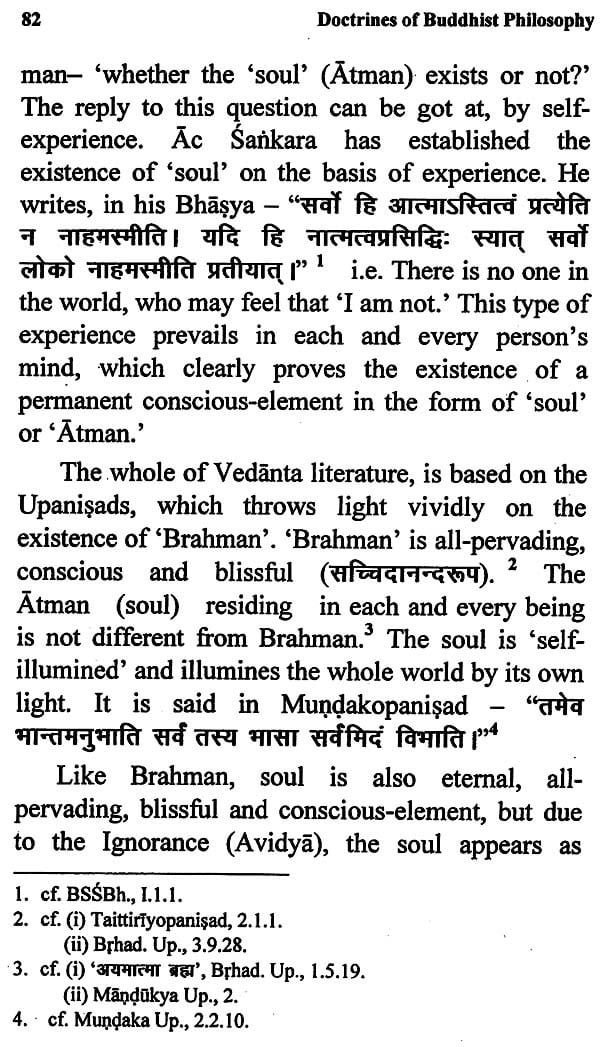 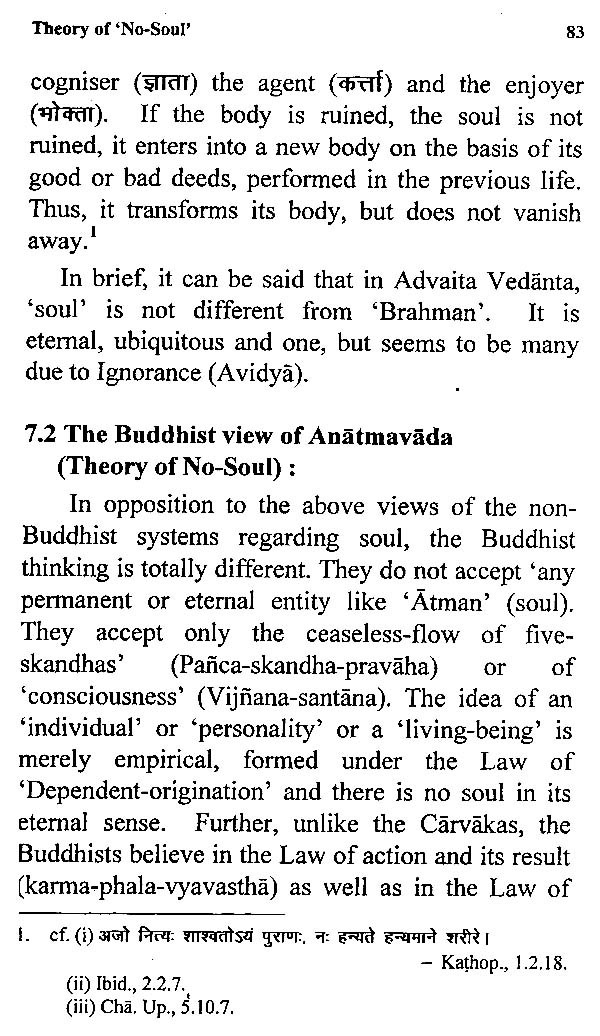 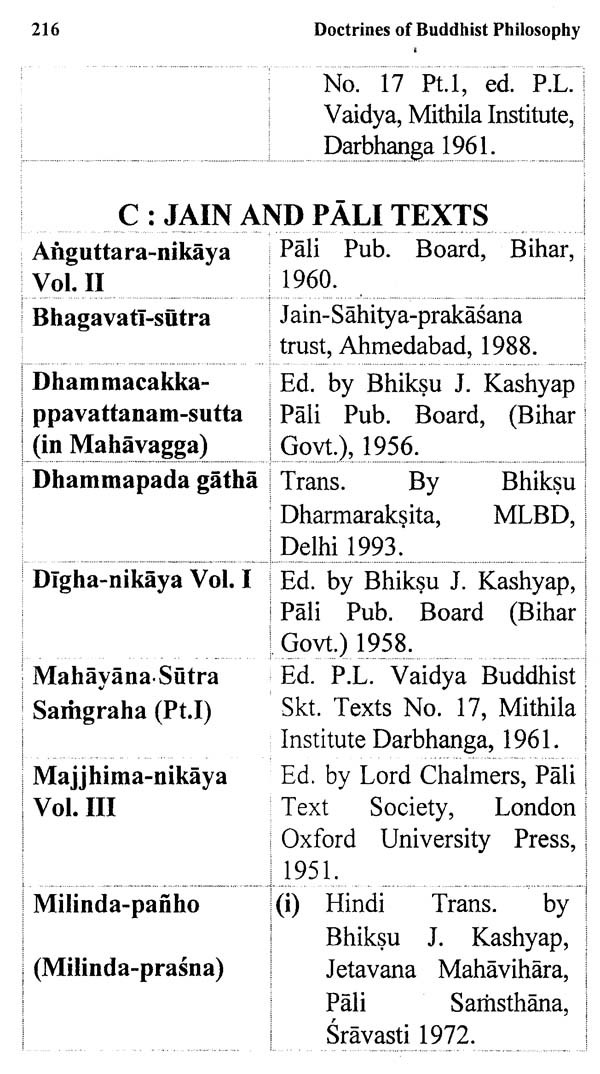 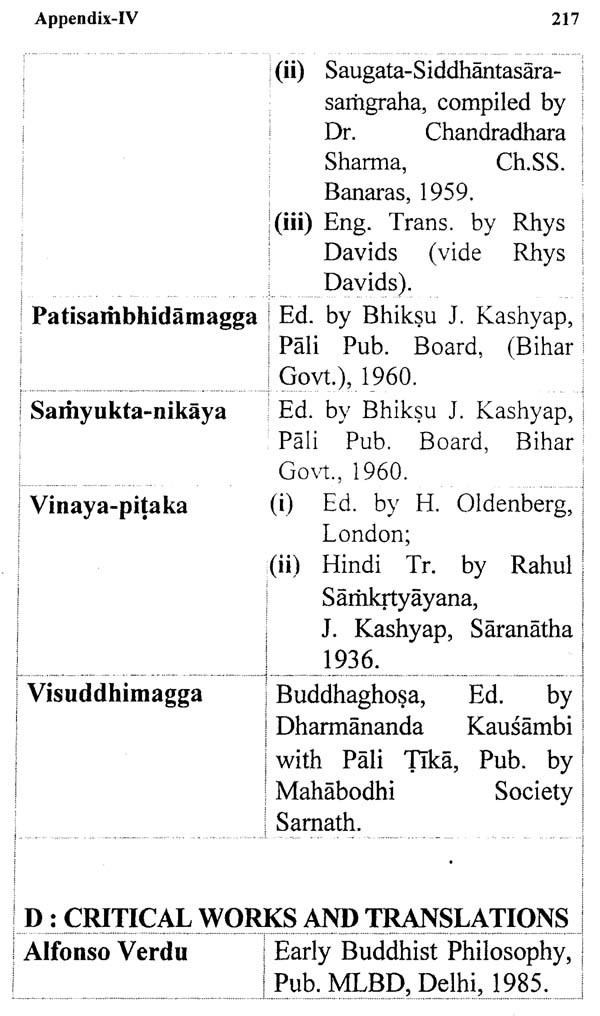