Buddhism appeals both to the masses and to the intelligentsia. It offers milk for the babe and meat for the strong. It presents one way of life to the members of the Holy Order and another to the laity. Above all, it expounds a unique Path of Enlightenment.

All these characteristics are featured in the Dhammapada, one of the thirty-one books that comprise the Tipitaka, the three Baskets which contain the quintessence of the Buddha’s Teachings.

Any truth-seeker, irrespective of his religious beliefs, can read this Book of Wisdom with interest and profit. By constantly reflecting on these golden sayings and by translating them into action in the course of one’s daily life, a religious- minded person can gain spiritual bliss that transcends worldly happiness and can attain to a higher spiritual plane whereby he can purify himself and try to purify and enlighten others both by example and by precept.

The Dhammapada is not a book to be read superficially like a novel and shelved aside. It should be read and re-read so that it may serve as a constant companion for inspiration, solace, and edification in times of need.

The Pali term Dhamma, Samskrit Dharma, is one of the most difficult words to be translated into English as it has many meanings. It has to be understood according to the context. Here it is used in the sense of Savings or Teachings of the Buddha. Pada implies sections, portions, parts, or way. Dhammapada may be rendered, "Sections or Portions of the Dhamma", "The Way of the Dhamma". It is somewhat difficult to offer a graceful English equivalent according to its literal meaning. "The Way of Truth’, "The Way of Righteousness", "The Path of Virtue", are renderings that have been suggested by various scholars.

The Dhammapada consists of 423 melodious Pali verses, uttered by the Buddha on about 300 occasions, to suit the temperaments of the listeners in the course of His preaching tours during His ministry of forty-five years. Circumstances that led to these noble utterances are presented in the form of long or short stories, together with traditional interpretations of the Pali verses and technical terms, in the voluminous commentary written by Buddhaghosa. This valuable commentary has been ably translated by E.W’. Burlinghame for the Harvard Oriental Series. It may be remarked that most of these verses are better understood when read with the content.

The gems of truth embodied in these texts aptly illustrate the moral and philosophical Teachings of the Buddha.

The very first two stanzas briefly represent the ethic philosophical system of the Buddha. The importance of the mind in assessing morality, the Buddhist law of moral causation (Kamma), the problem of pain and happiness, self- responsibility, etc., accompanied by two simple homely illustrations, find expression in these twin verses. The two relevant stories clarify the points at issue. The very first line of each of these twin verses presents some difficulty, especially the term Dhamma. Commentary — gives a long interpretation. The two connected stories make the matter clear.

The verses dealing with hatred and its appeasement are of special significance in this atomic age. Force will certainly be met with force. Bombs will be met with bombs. Vengeance will be met with vengeance. Retaliation never leads to peace. Buddha’s advice to His non-violent followers is : "Hatreds never cease through hatred, but through love alone they cease", Metta or loving-kindness is the only answer to modern bombs.

The high ethical standard the Buddha expects from His ideal followers are depicted in some verses. The last two verses of the first chapter indicate the Buddha’s attitude towards mere learning and actual practice. The Dhamma is to be studied with the object of practising it. As such the Dhamma is compared to a raft whereby one crosses the ocean of Samsara. The very last verse is alone sufficient for an ideal Bhikkhu for his whole lifetime.

How the Buddha exercises His psychic powers to transform a lust-ridden, mentally sick Bhikkhu to a pure, spiritually healthy individual is evident from the story of prince Nanda, His step-brother, and the verses uttered concerning him.

In obedience to the Buddha, though with reluctance, prince Nanda entered the Order on his wedding day. As he was constantly thinking of his bride-elect without being intent on the Holy life, the Buddha, instead of adopting the usual direct method of instruction, devised an effective practical way to divert his attention to a seemingly more desirable similar object and succeeded in making him an Arahant.

The first two chapters mainly deal with the ethics of Buddhism and are of equal importance to both Bhikkhus and laymen. 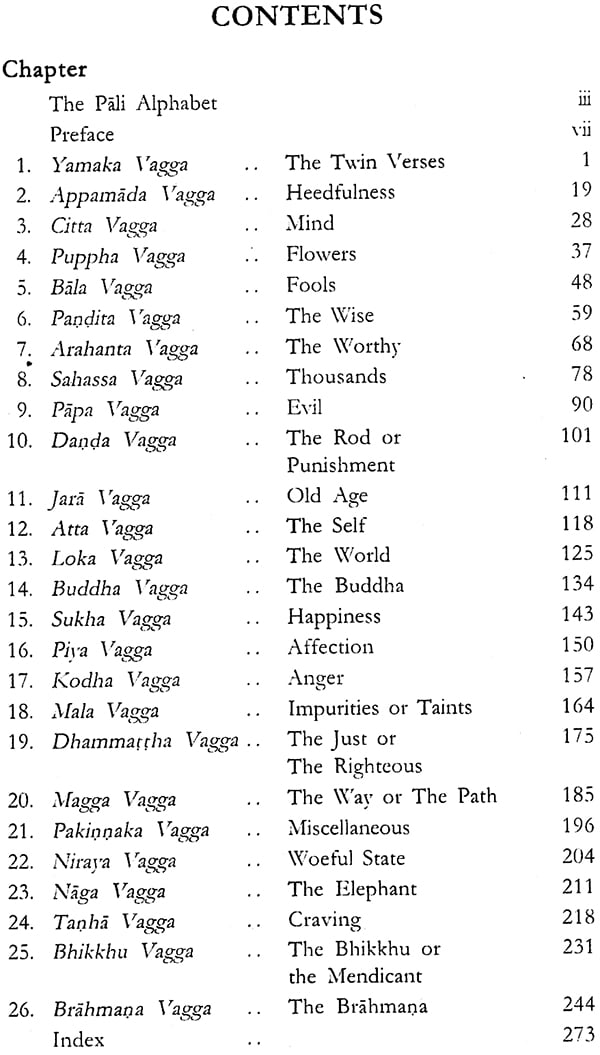 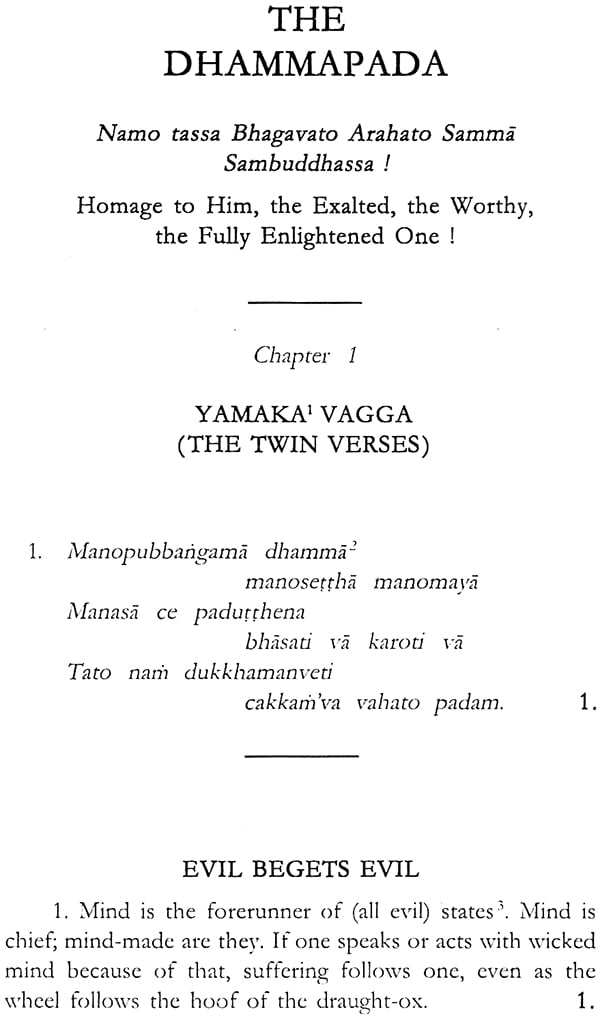 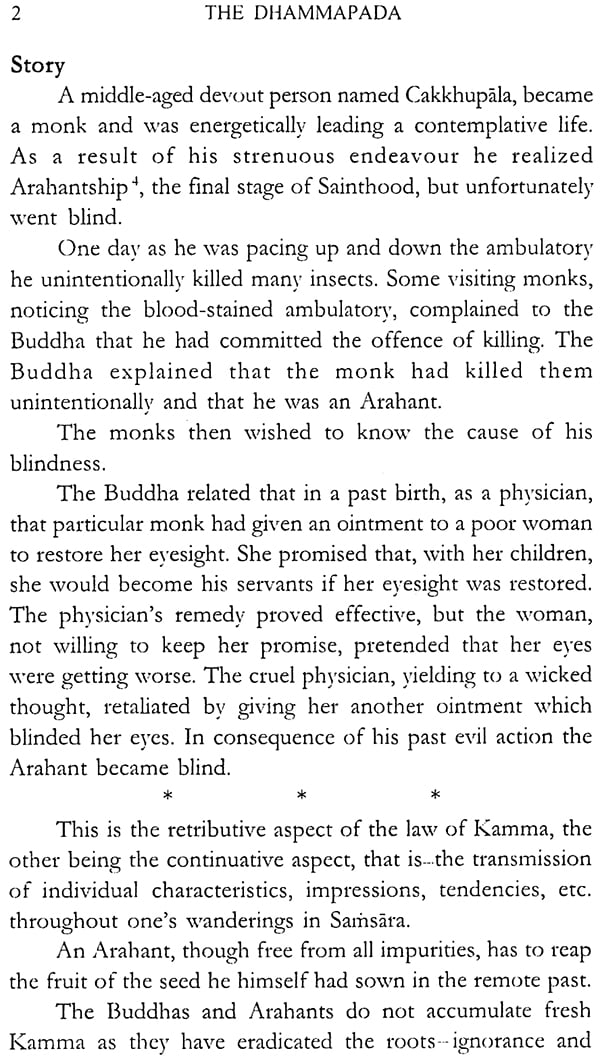 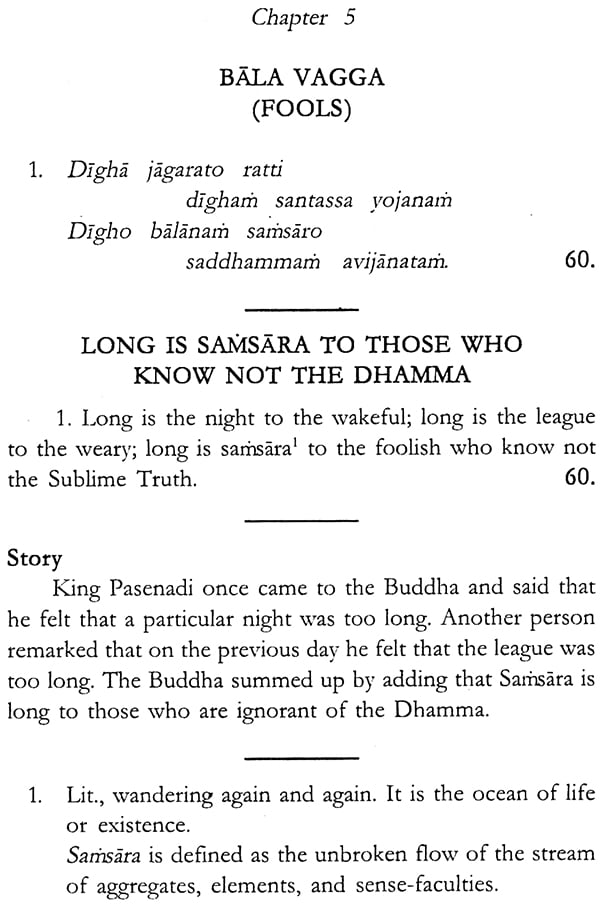 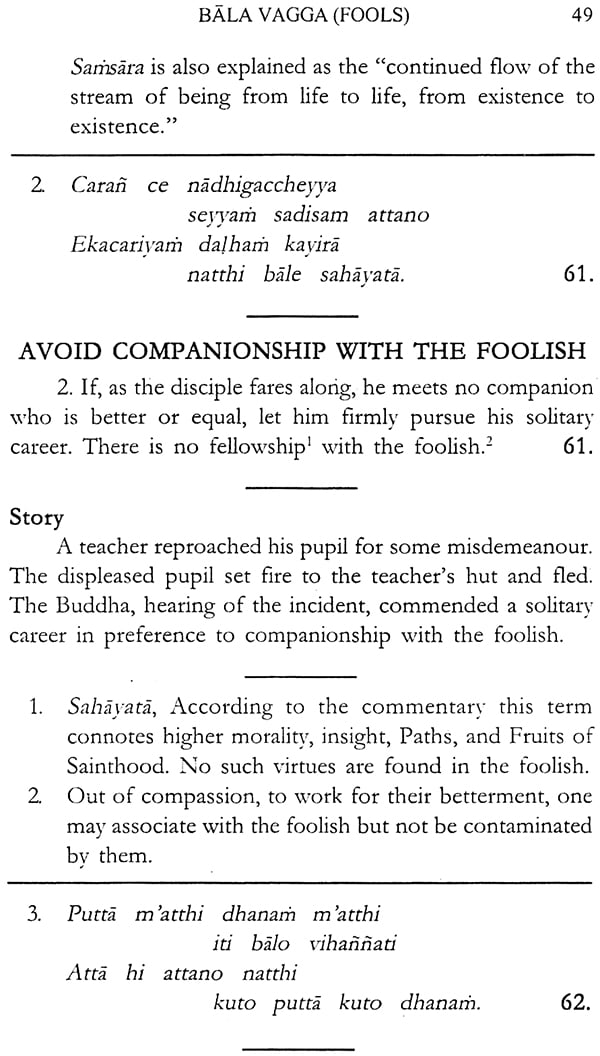 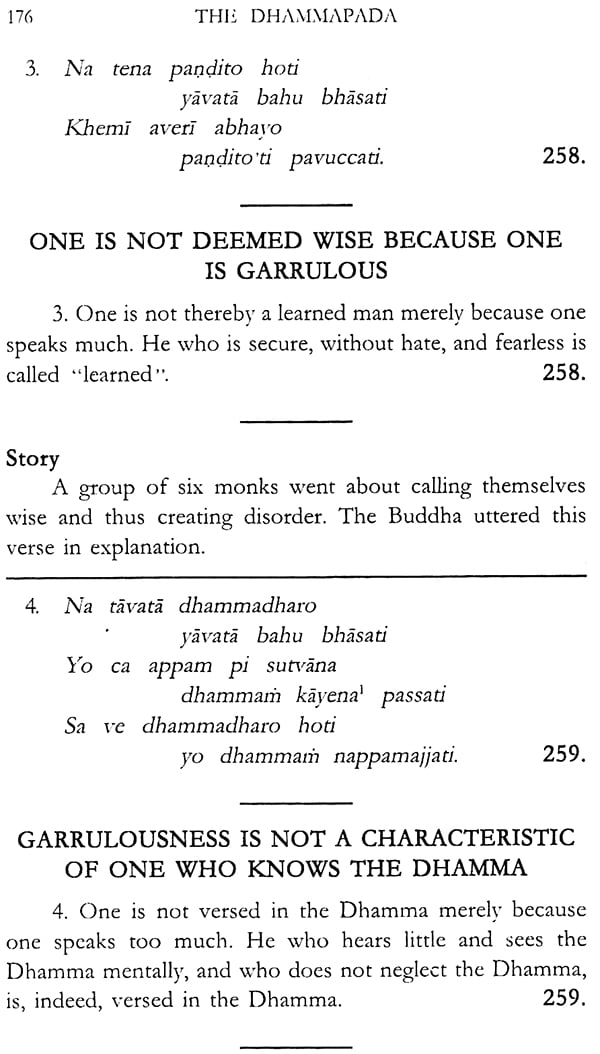 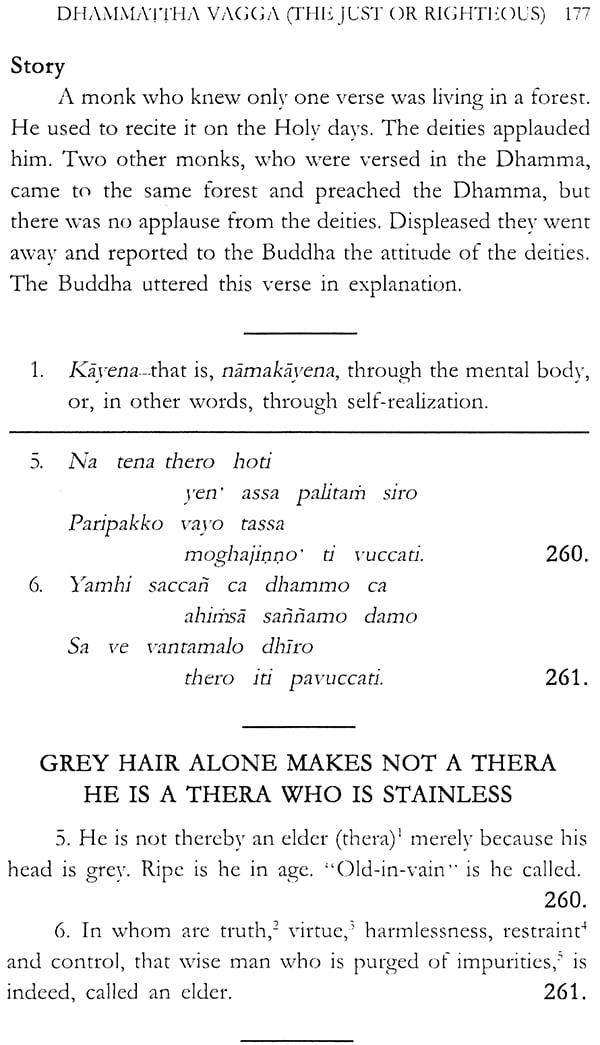 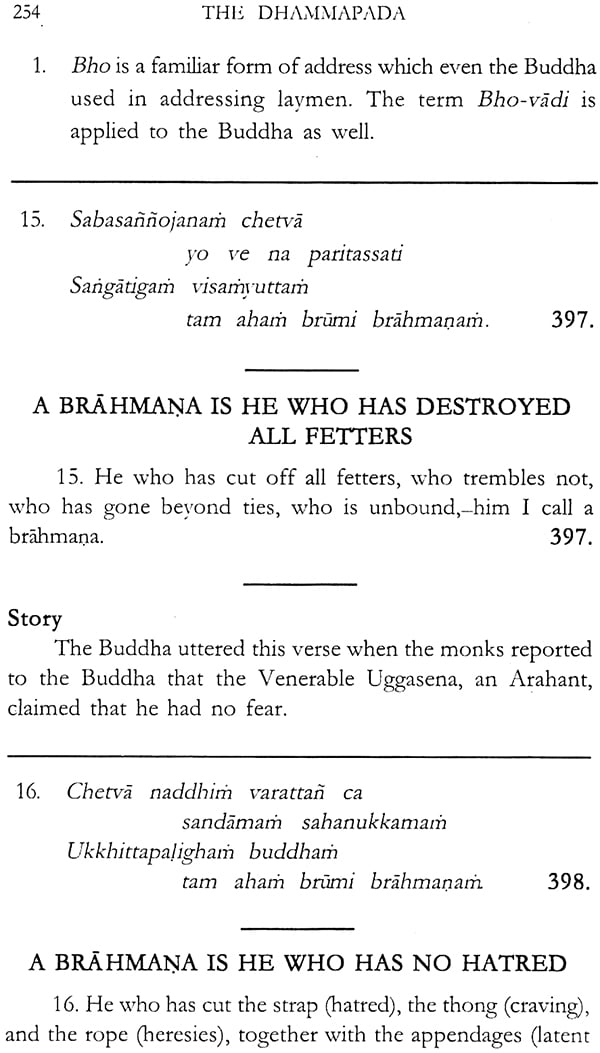 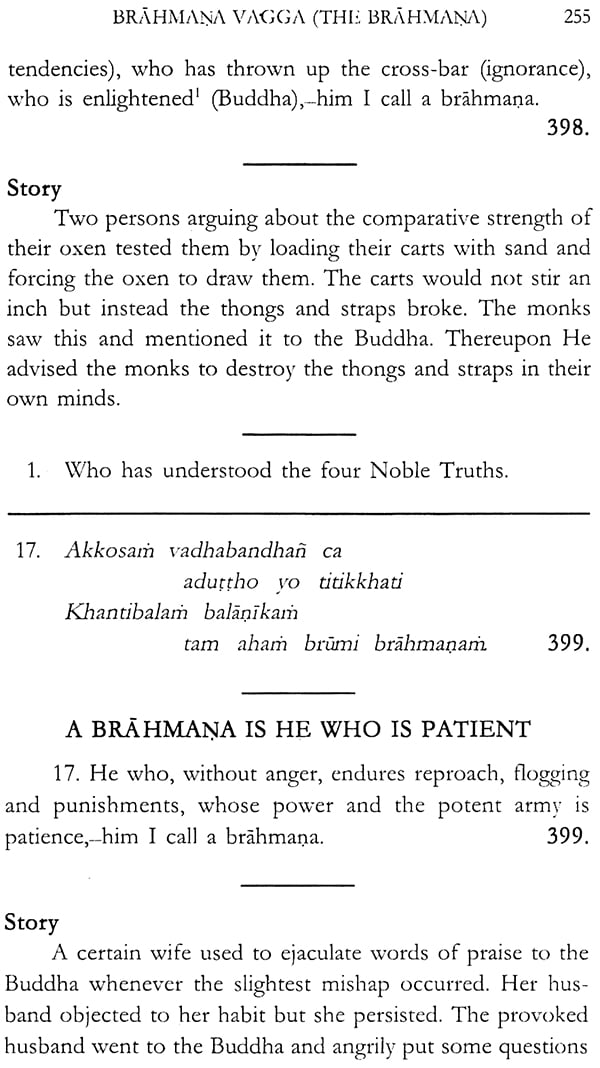