In his professional career, however; he was a Professor of Psychology. He has headed the Department of Clinical Psychology in the National Institute of Mental Health and Neurosciences, Bangalore, and the Department of Indian Culture in the Callison College Study Centre of the University of the Pacific (USA). At present, he is the Senior Associate of National Institute of Advanced Studies (Indian Institute of Science), Bangalore, and Guest Faculty, Indian Institute of Management, Bangalore and member of the Governing Council of TTD (SVCL Research Centre), Tirupati.

He has been Member of Karnataka State Lalitha Kala Academi and Sangita Nritya Academi: he has served on the Agama Board (Govt. of Karnataka). He is President of Silpa-Kala Pratishtana. The Govt. of Karnataka has honoured him with the 1986 Rajyotsava Award. He has received awards from Lalita-Kala Academi, Sangita Nritya Academi and Sahitya Academi. He has been the recipient of Veda Sanman (for 2000) by The Maharshi Sandipani Veda Vidya Pratishthan of Ujjaini (Govt. of India, Ministry of HRD).

He is at present engaged in the 30-volume project Rgveda-Darsana (Eight Volumes of which hive appeared).

He is also a musicologist, a sculptor and painter, and has held some one-man shows.

The Kalpatharu Research Academy, Bangalore is an Institution running with the benign blessings of his Holiness Jagadguru Shankaracharya, Sri Sri Bharathi Theertha Mahaswamiji under the auspices of Dakshinamnaya Sri Sringeri Sharada Peetham, established in 1981, Kalpatharu Research Academy has strided across the horizon of Indological Research arid Publications with giant steps, and today stands as an Institution known for its unique quality of Research work.

Kalpatharu Research Academy is dedicated to the cause of preservation of the ancient heritage of India; it has encouraged Research in the fields of Agama, Veda, Tantra, Jyoutisha, Mantra-Sastra, Vastu, Yoga, Silpa, Ayurveda etc.

The Academy has plans of undertaking intensive Research in the field of Veda and Vedanga, and intends publishing “Bharatiya-Samskriti-Sarvasva-Kosha” an Encyclopaedic work in several volumes dealing with all aspects of Indian Tradition and Culture. It seeks to promote Education, Culture and Science, Art and learning in all its branches. The approach will be broad- based and multi-disciplinary.

An extensive, comprehensive and specialist reference library has been built up to assist the Research Workers in the Indological disciplines. A valuable collection of Palm-Leaf manuscripts relating to Veda, Vedanta, Vedanga and allied subjects has already been made; the collection work is continuing.

Dakshinamnaya Sri Sringeri Sharada Peetham has been running a Guru-Kula type of Institution on traditional lines to impart Vedic Education at several places. Some of these Institutions are over 100 years old. It is the intention of Kalpatharu Research Academy to take an active part in continuing this age-old tradition and act as the Research & Publication wing for these Institutions.

This Publication is the Seventy-eighth of its achievement in this field.

The project on Bharatiya-Samskriti-Sarvasva-Kosha is continuing with several precious publications on different subjects of lasting value concerning Indian culture. The Academy is proud that it is serving the cause of promoting Indological awareness. The rich cultural heritage of the country is being authentically articulated by steady flow of publications over the years.

The Academy is grateful to Vidyalankara Sastra-Chudamani, Sangita Kalaratna Prof. S.K Ramachandra Rao for his most valuable contributions in our publication venture. He has authored the present volume, as he has done the previous ones and the Academy also places on record the excellent services of the printers in making the publications neat and attractive.

This is the second part of the volume on the Development of Rigvedic thought. It is a traditional conviction as also a historical truth that Vedic thought and Vedantic thought are not only a continuum but represent one thought-system. Indologists and scholars in Indian lore have often committed the mistake of looking upon the Vedantic thought as different from the Vedic thought, as an independent growth. They tend to view the Upanishads as not strictly belonging to the Vedic corpus. It is to correct this error that the present volume in two parts has been compiled. All systems of thought in India have grown out of the Upanishads, and the Upanishads represent the conclusions of the Vedic corpus. The Rigvedic ideology finds its fulfilment in Vedanta.

I am grateful to Daivajna Shri K.N. Somayaji, for giving me this opportunity of documenting the results of my research and communicating my own considered views. I am indebted to Shri Shri Bharati Thirtha Swamiji, the Pontiff of Sri Sharada Peetham, and the chief patron of Kalpatharu Research Academy, and to Shri V.R. Gowrishankar the chairman of the Academy and the administrator of the Sharada Peetham for their interest in my work.

I thank Shri Venkatesh Babu and Shri Nagendra of the Omkar Offset Printers for their courtesy and co-operation. 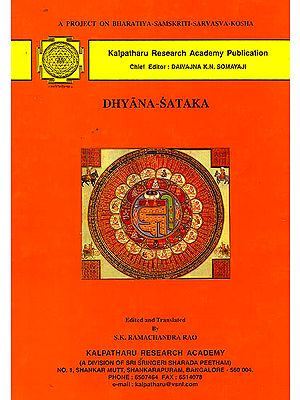