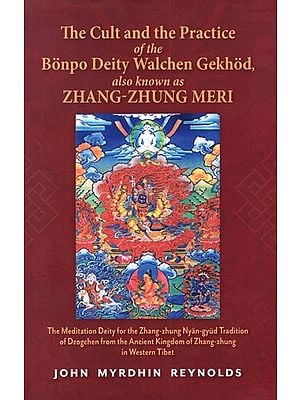 THE CULT AND PRACTICE OF THE BONPO DEITY WALCHEN GEKHOD, also known as ZHANG-ZHUNG MERI, the Meditation Deity for the Zhang-zhung Nyein-gybd Tradition of Dzogchen from the Ancient Kingdom of Zhang-zhung in Western Tibet, containing translations of the Sadhana Practice texts for the Deity Zhang-zhung Meri from the Me-ri sGrub-skor, together with the Origin Myth of Walchen Gekhod and translations of commentaries on this practice by John Myrdhin Reynolds.

Before the coming of Buddhism from India to Tibet in the 7th and 8th centuries and the simultaneous arising the empire in Central Tibet, there flourished in northern and western Tibet the ancient kingdom of Zhang-zhung. This kingdom, which centered around the sacred mountain of Kailas, was closely connected with other ancient Central Asian cultures and its own religious culture was known as Ban. In later centuries after the fall of the Tibetan empire and the fragmentation of the country, this ancient religious tradition was preserved among the Tibetan people by the Bonpo Lamas and this continued to exist and be practiced among the Tibetan people until the present day, parallel to the Buddhism of Indian origin. Central to this Bonpo tradition was the theory and practice known as Dzogchen, "the Great Perfection." Of Central Asian origin, it also flourished in the Nyingmapa school of Tibetan Buddhism since the early days.

Connected with the B6npo practice of Dzogchen, known as the Zhang-zhung Nyan-gyi.id, "the Oral Tradition from Zhang-zhung," there is the practice and ritual of the meditation deity Walchen Gekhod, "the slayer of demons," also known in his specialized warrior aspect in golden armour as Zhang-zhung Meri. This tempestuous mountain god of Mt. Kailas, having descended thereupon in the form of a gigantic flaming yak, was the paron deity of the Zhang-zhung kingdom and its ruling dynasty. However, according to the Bonpo tradition, this illustrious figure was not just a worldy deity, but a manifestation of Buddha enlightenment in wrathful form emanated by Atimuwer in order to combat the scourge of demons and evil spirits inflicted upon humanity and the planet earth. Under the guidance of Lopon Tenzing Namdak, the foremost living expert on Bonpo Dzogchen and its traditions, this volume contains a study and translations of a number of texts associated with this ancient deity of Zhang-zhung from Tibetan sources"

John Myrdhin Reynolds (Vajranatha) is a translator of Tibetan, a scholar in the fields of Tibetan Studies, Buddhist Philosophy, and Comparative Religion, who has taught at a number of universities in the West. He was ordained as a Ngakpa Lama in the Nyingmpa tradition by HH Dudjom Rinpoche, and for more than ten years he has worked closely with Lopen Tenzin Namdak on the translation of early Bonpo Dzogchen and Tantra texts.

The translations presented here were undertaken in collaboration with Lopon Tenzin Namdak, the leading scholar and meditation master among the Bonpos of Tibet who are now in exile in India and Nepal, during his first visit to the United States, April through July, 1989. The Tibetan texts involved were concerned with the cult and practice of Zhang-zhung Men, a special form of Walchen Gekhod, the patron of the ancient kingdom of Zhang-zhung in Western Tibet. This deity is especially associated with the sacred mountain of Gang-chen Tise, otherwise known as Mount Kailas. My own personal interest in Gekhod and his special aspect Zhang-zhung Meri, as well as in the Ban teachings in general--my previous background having been in the texts, teachings, and practices of the Nyingmapa and of the Kagyudpa schools of Tibetan Buddhism- - was stimulated by Namkhai Norbu Rinpoche Potter Valley, 1980). He indicated at that time that, in fact, there eTist two authentic historical lineages for the transmission of the Dzogchen teachings into Tibet. I had been studying Dzogchen under a number of learned Nyingmapa Lamas in Darjeeling and in Kathmandu, in particular with HH Dudjom Rinpoche, at that time head of the Nyingmapa school. Later I began the study and vractice of Dzogchen under the inspiration of Namkhai Norbu Rinpoche, who made abundantly clear to me the early historical context of these teachings and also the historical origins of Tibetan culture in the Bonpo tradition.

In 1989, I made available in a privately printed photocopy edition for interested Western students of Bon and Dzogchen my monograph entitled "The Cult and Practice of Zhang-zhung Med." This limited edition contained a translation of the intermediate length sadhana of Meri from the Me-ri sgrub skor, and also a brief account of the origin myth of Walchen Gekhod, drawn from the purification ritual of the Red Medicinal Waters(dmar tshan) as an appendix. Having subsequently obtained from Yongdzin Rinpoche a newly printed edition of the Me-ri sgrub skor, I decided to translate a number of the purification rituals found therein in a new and expanded edition of my original monograph. This includes the translation of some commentaries for the sadhana practice of Gekhod Meri. Again, I must thank Yongdzin Rinpoche, Lopon Tenzin Namdak, and Khenpo Tenpa Yungdrung of Triten Norbutse monastery of Kathmandu, Nepal, for their generous help and encouragement with this project. 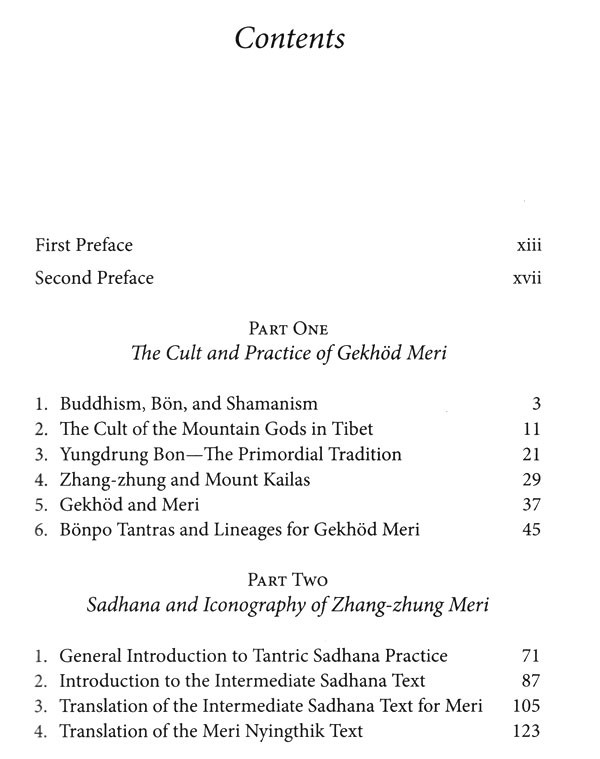 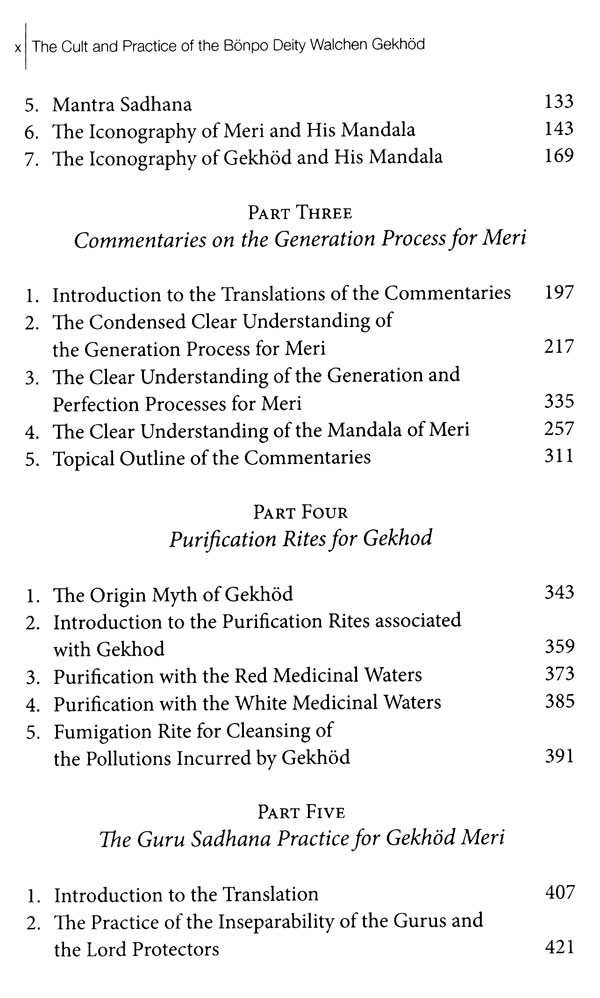 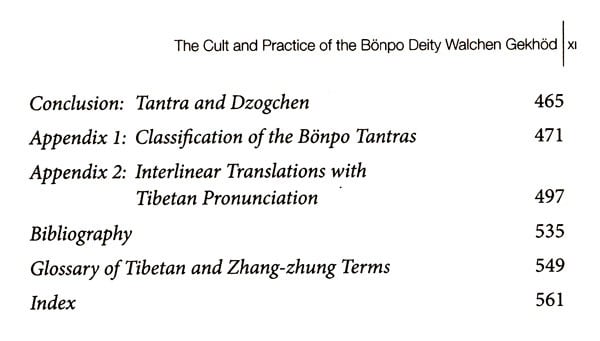 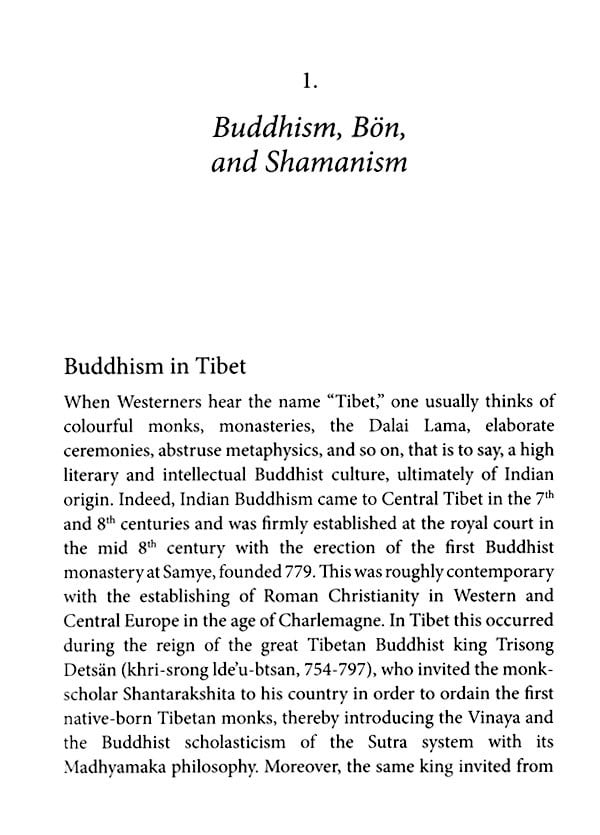 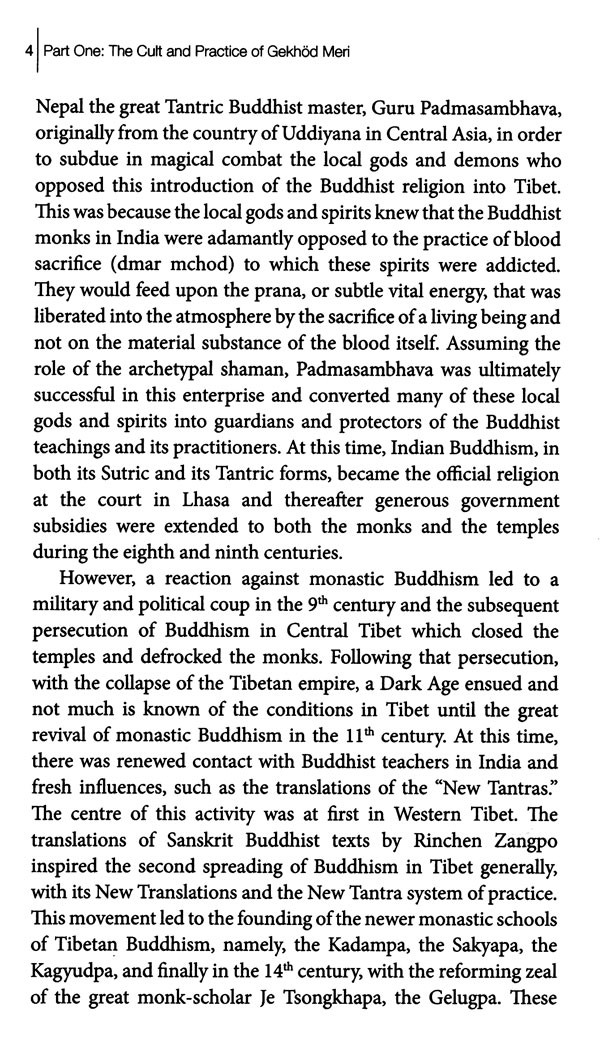 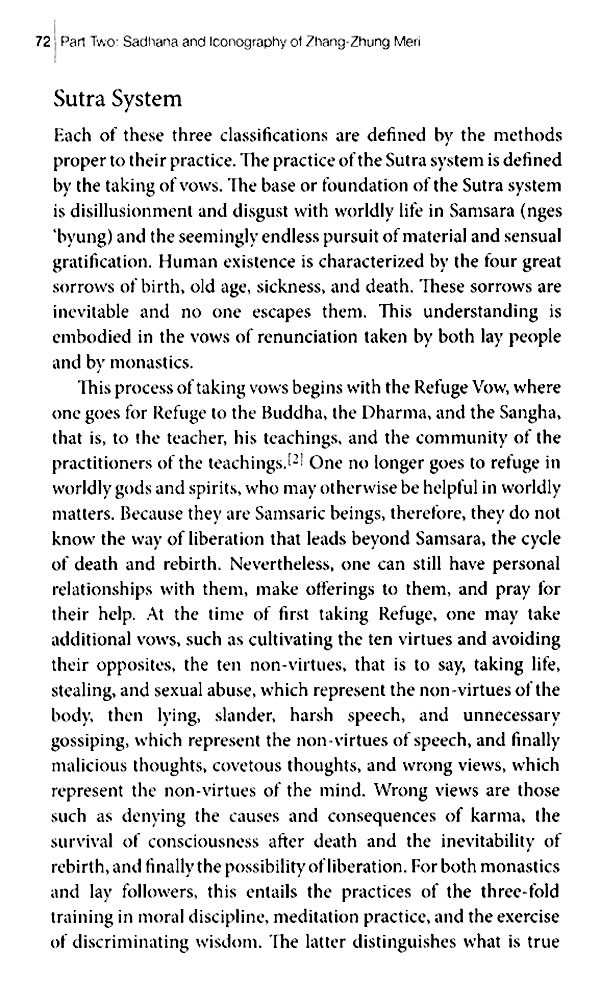 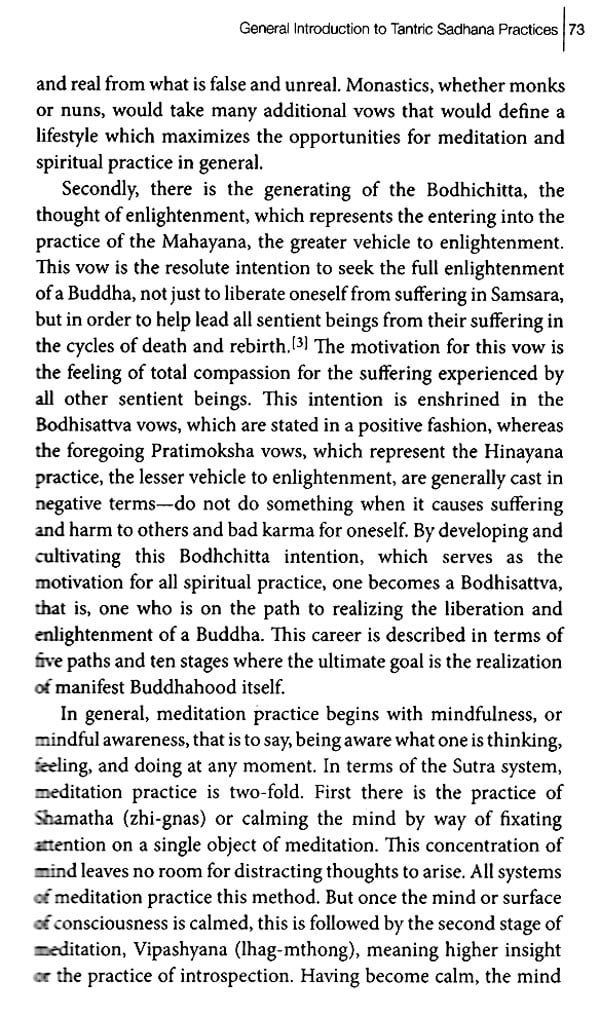 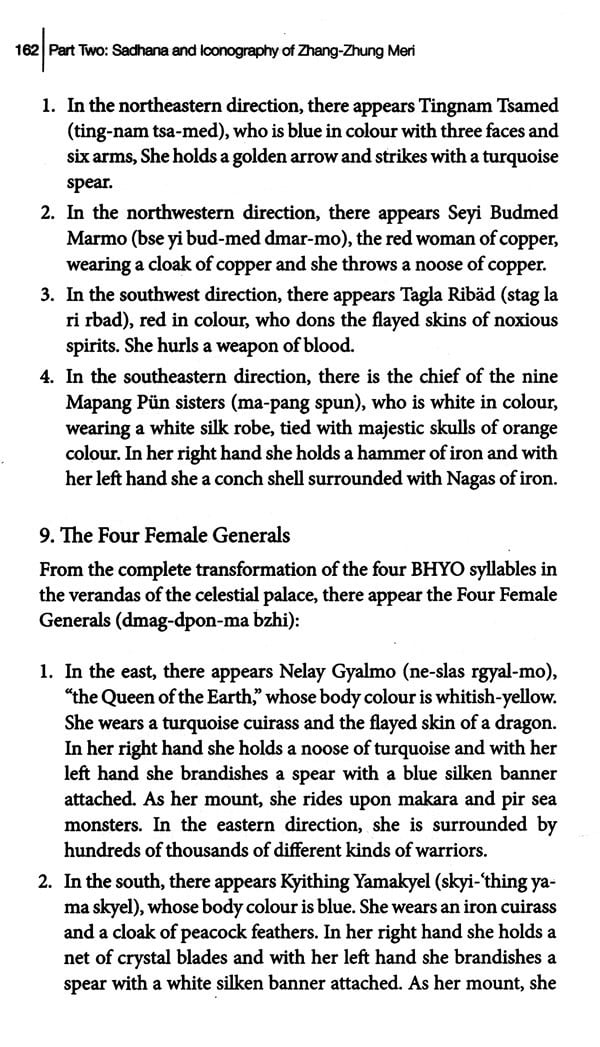 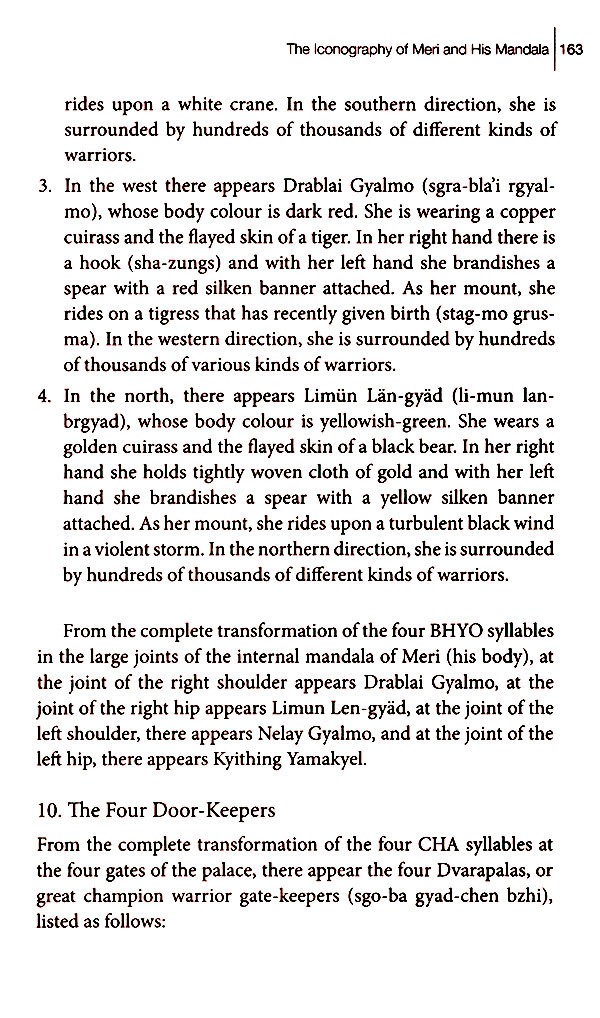 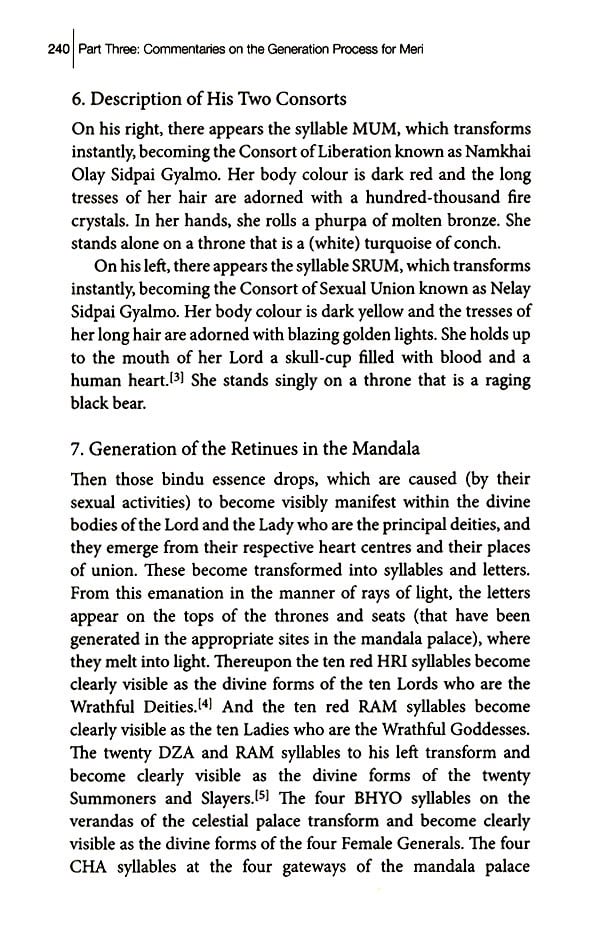 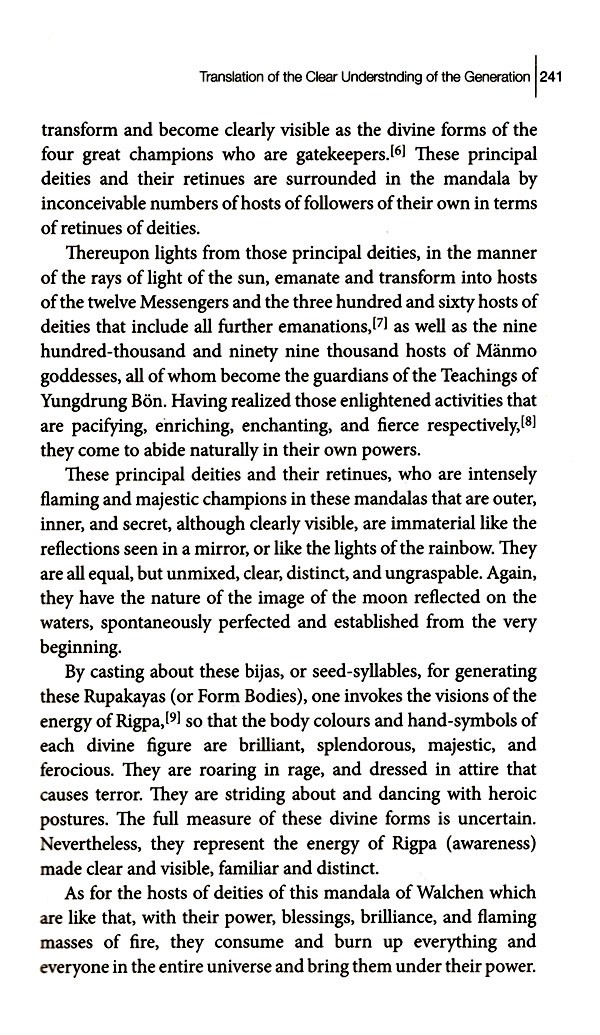 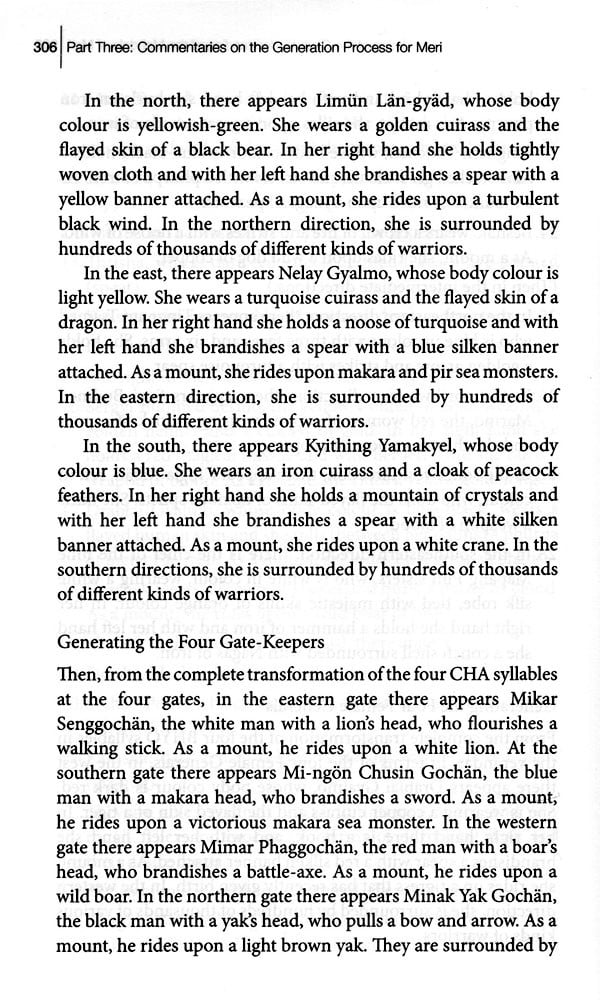 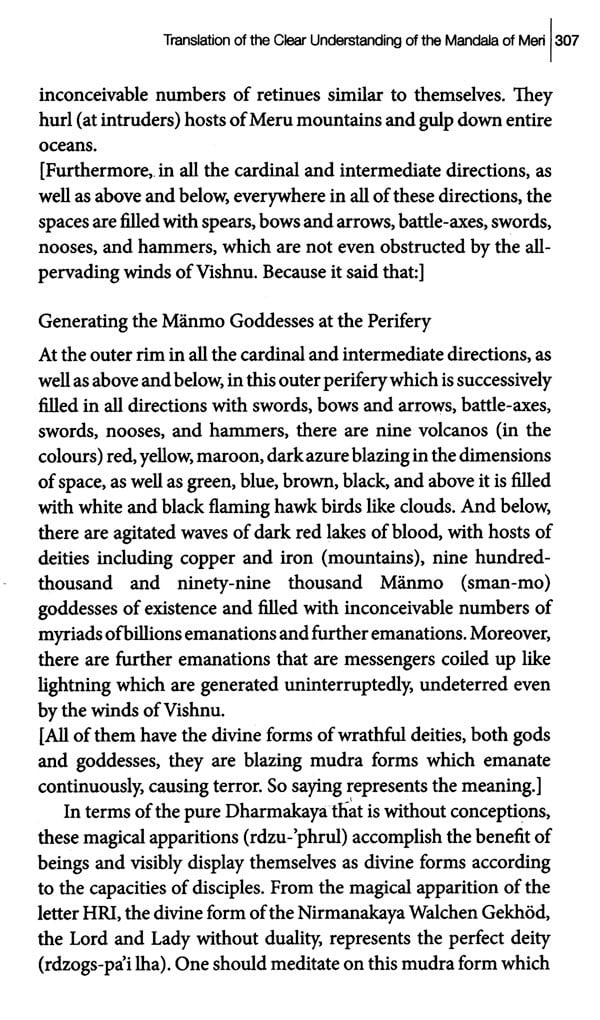 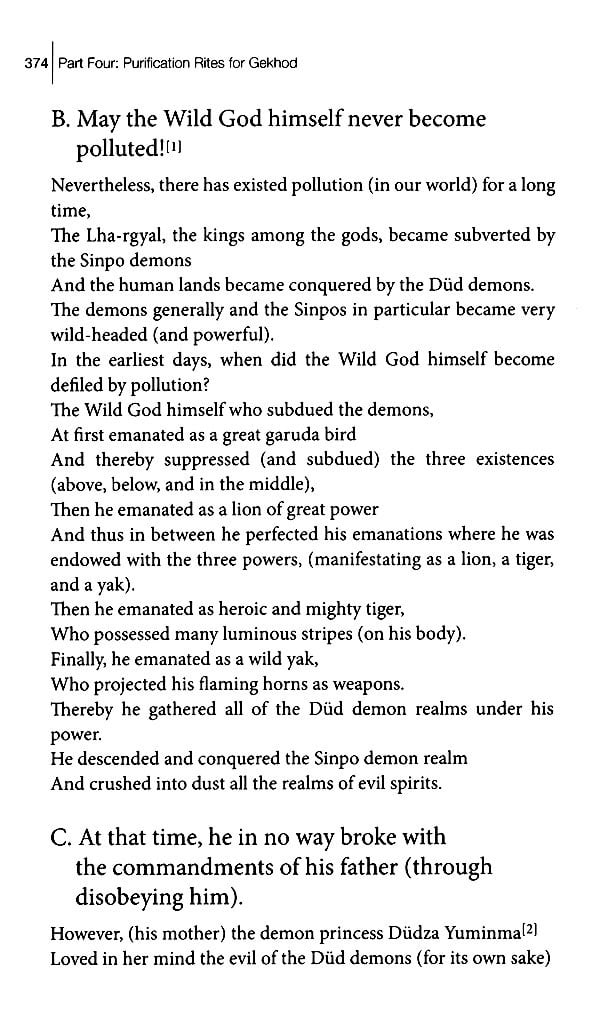 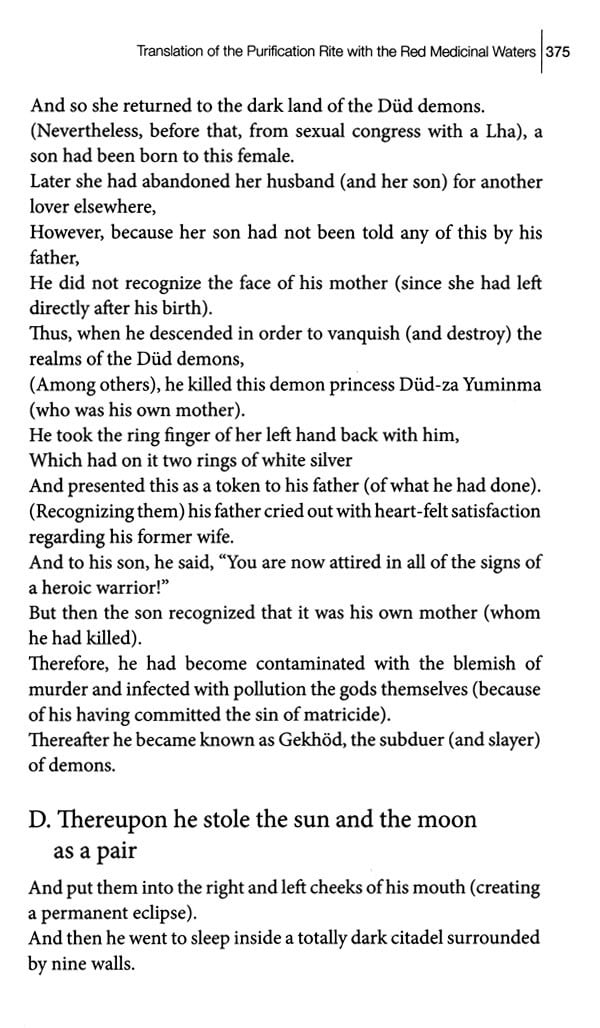