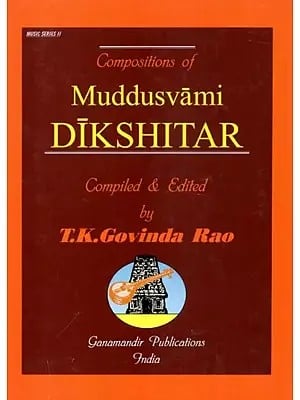 T.K.Govinda Rao, who hails from a family of musicians, is a leading vocalist of Indian classical karnatak music. In 1949 he joined the then central college of karnatak music at madras where, under the care of great musicians like Tiruppampuram Swaminatha Pillai and Smt. T. Brinda, he completed the course of ‘’Sangita Vidvan’’.

A career that has spanned over five decades brought him assignments such as; Lecturer, govt. of tamizh nadu music college, Chennai; producer-music all India radio, Chennai; and finally chief producer music in the directorate-general, all India radio, new Delhi. In addition he has been associated with the Music Academy, Chennai as a member of the advisory committee, central Sangeet Natak Akademi and ICCR as also with the universities of Banaras, Delhi, Madras, Annamalai, Bangalore and Telegu University in various capacities.

All these assignments, however, did not deter him from his prime vocation as a vocalist and teacher that took him, over the years, all over India and abroad; Srilanka, Singapore, Malaysia, UK, USA (SV Temple, Pittsburgh, among other cities), Canada and Muscat, where he has taught hundreds of students. Titles like Sangita Cudamani, Sangita sastra Ratnakara, Ganakala Tilaka, Nadakkanal, Swara Samrat, Sangita Samrat and Sangita Acarya, besides the Academi award from the central Natak Akademi, the national academy of music, dance and drama, have been conferred upon him for his contributions to the field of Karnatak Music.

As the renowned senior music critic Sri P.N. Krishnamurthy, quoted in the well known music Magazine “SRUTI” said “T.K.G. is a veteran of the old school who has played a prominent role in the preservation of all that is precious in the truly classical rendition of Karnatak Music”.

A major facet of his activities over the years was and is connected with composing tunes and editing works of distinction. These include: “ composition of puranadara dasa”, “Tamizh songs of Periyasamy Tooran”, “Varnamanjari,”-42 Tana and 8 Pada Varna-s of well known composers, with notation is diacritical roman scripts; selected volumes of Tyagaraja Krti-s and also, transliteration of semmangudi srinivasa Iyer’s Sri tyagaraja Ghanaraga Pancaratna Kriti-s “ from Malayalam to Tamizh.

To promote the time –tested oral traditions of classical karnatak music, he has founded a body named “Ganamandir Trust, “ with the object of publishing works on music , producing audio/video cassettes, organizing seminars and workshops on music in India and elsewhere, and providing them to the donor members free of charge.

With the publication, T.K.G. has completed the first phase of his project by compiling and editing all the so far available, authentic compositions of the TRINITY of Karnataka music in diacritical roman and devanagari scripts with meanings and SRGM notations in English, presented in comprehensive volumes, the common scripts help to bridge, not only the language barrier, but also the generation gaps, while preserving the essence and identity of the originals that remain characteristically Indian.

I feel privileged to have been requested by Sangita Vidwan Shri T. K. Govinda Rao to write this Foreword for his monumental works of the Trinity of our South Indian classical music, namely Tyagaraja, Mudduswamy Dikshitar and Syama Sastri.

In 1995, Shri TKG brought out a compilation of practically all the extant compositions of Tyagaraja, numbering 688, which had some new features. The text (sahityam) was reproduced both in the Devanagari and the Roman (Diacritical) Scripts. The text was set out in such a form especially with regard to the separation of the lines, that the reader could easily grasp the Praasa (rhyming) pattern. A free translation, intended to reflect the spirit as well as the meaning of the Kritis followed. The book was received with acclamation by stalwarts like Shri Semmagudi Srinivasa Iyer, and scholars like Shri T. S. Parthasarathy and Shri S.V.K.

Now Shri TKG has gone one better on the 1995 publication. He has, in addition, written down the SRGM notations for all the 688 Kritis. The notation can serve a valuable purpose, both as an aid to memory and also as a means of following the order of the sangatis. For students and vidwans alike, the new book can serve as an authoritative work of reference.

It is hardly necessary for me in this brief foreword to attempt to describe the greatness of Tyagaraja as a composer, as a Ramabhakta, and as a human being who led a saintly life. I now have to turn to the compositions of the second member of the Trinity of Karnatak music, Sri Muddusvami Dikshitar. Dikshitar was born in Tiruvarur, which was coincidentally the birthplace of Tyagaraja and Syama Sastri. Sri Dikshitar was a not only a great composer, but was also a Sri Vidya Upasaka,who was initiated by Sri Chidambaranatha Yogi. Dikshitar's mastery over Sanskrit was quite remarkable. Many Sanskrit scholars have discovered and explained the esoteric elements which are to be found in the Sanskrit sahityas of Sri Dikshitar. One of the great contributions of Dikshitar to South Indian classical music is that he has composed Kritis in all of the 72 Melakarthas in the Asampurna Melapaddhati. Shri TKG has put together 472 compositions of' Dikshitar the Sahitya in Devanagari & Diacritical Roman scripts with a free- flowing translation in English, followed by the SRGM notations, This book should again find a place in the shelves of every serious student of Karnatak Music.

Together these three volumes constitute a veritable encyclopedia of the compositions of our gloriousTrinity of Karnatak Music. They represent a colossal labour of love. All of us who have an interest in Karnatak music are beholden to Shri TKG for this undertaking.

I have asked myself, "what makes T.K. tick?" Is it fame he is after, which, according to Milton, spurs one" to scorn delights and live laborious days?" Or is it fortune he is seeking? The answer is neither; on the other hand, he has expended his own resources to make this publication possible. I believe that he has been motivated by two compelling urges. One is his devotion to our common Guru Sri Musiri Subrahmanya Iyer, a great musician and an even more inspiring teacher, who trained a generation of Vidwans and Vidushis with a commitment to Bhaava Sangitham. The other is his great love for our imperishable heritage of Karnatak music, and the desire to preserve this heritage for posterity. Thus "imperishable" has become "immortal," and all music lovers are eternally in debt to Sangita Vidwan Shri T.K. Govinda Rao for this magnificent collection.

. . Shri TKG has by no means come to the end of his work. There are fresh fields to explore, and other composers demanding his attention. Long may he live, and have the strength and dedication to continue this 'grand design!'

" Our law and politics, our arts and sciences, our manners and morals are derived from our fundamental faith which makes for the spiritual unity of any community." .. There is a moral law which governs the rise and fall of nations. Adherence to the moral law of DHARMA elevates a nation:non-adherence to it degrades it. If we are to progress we must adopt the path of virtue ... We have had in our country from time to time of the RG VEDA down to our own days a long line of torch bearers who stress the primacy of spiritual values. ..

From time to time this fabric of spiritual unity is reinforced by the presence and influence of poets, philosophers and saint singers whose contributions have upheld this faith. Among the composers of South Indian classical music, the Trinity of Karnatak music, namely Muddusvami Dikshitar, Tyagarajasvami and Syama Sastri rank supreme over all composers at all times. This is because they were not only the great masters of the art of music but were great saints leading a life of pure devotion and renunciation.

The compositions of Dikshitar can be compared to a castle with all its paraphernalia. His composition are in praise of numerous Gods and Goddesses, are full of devotional, philosophical, literary, historical, mythological, and astrological details. For this purpose, he employs apt Sanskrit words and phrases. The musical content of his compositions is of the highest order dealing with all the 72 Melakarta-s. He, thus, presents before us, the original classical Indian music of the greatest quality with its majesticity, grandeur, and splender.

The purpose of this book

i. To present the correct-authentic-text of the Compositions of Muddusvami Dikshitar in national and international scripts viz. Devanagari and Diacritical Roman, to reach the maximum number of people all over the world.
ii. To provide a free style gist sufficient to understand the meaning of the song enabling effective rendition. It is essential for the singers as well as the listeners to know this, in order to derive the optimum from the great compositions. About the Commentary
So far, in the available sources, the commentaries in English have taken either the form of an essay or word to word translation. Though the essay type of commentaries highlights the meaning of the song in an interesting manner, they are at times prone to be blended with subjective imagination. Even the great scholars differ in the interpretation of the meaning and therefore the meaning given is subject to difference of opinion. However after compiling almost all the available important publications with us, we have prepared a free style gist as we thought appropriate. Minute care has been taken to give the meaning in the order of Pallavi, Anupallavi and Carana; where at certain places, when we felt the insufficiency due to different meanings for the word, the same sanskrit word has been mentioned in the meaning. A large number of such words found in the compositions are listed in a glossary at the end of the book with its corresponding suitable meanings in detail befitting the context of the songs.

About the uniqueness of this Book:

i. A collection of 472 compositions in one volume has been made available for the first time in Devanagari and Diacritical Roman scripts with English translation followed by SRGM notations in Roman script, reaching all corners of the globe.
ii. All compositions are presented in a format revealing the beauty at a glance of its poetical excellence of rhymes etc. besides Raga, Arohana, Avarohana, Mela, Tala, and Visesha prayoga-s wherever necessary.
iii. All the songs are indexed in respective alphabetical order in English as well as in Devanagari scripts to help quick spotting of the songs sought at the end of the book.
iv. Since most of the compositions of Dikshitar are on different deities of different temples at different places, a separate chart is given under the Classification of songs for ready reference.

About the SRGM Notation

Notation, however it seems to be perfect, one cannot understand the expression- the balance between the Raga bhava and its given Sahitya Bhava as expressed in the composition. In fact the singer's imagination while singing counts a lot in the final and finer presentation.

The earlier experiments of using the Dasavidha gamaka-symbols have not been found satisfactory for the reason mainly due to the lack of understanding of the gamaka-symbols themselves. My GURU used to say that only those people possessing sufficient Raga, Laya & Svara jnana could understand the symbols of Gamakas, the underlines, and the double underlines etc. Ironically, for those who do not have sufficient jnana, these symbols may fail to make any sense and for those having sufficient jnana, they do not require any symbols .. However the symbols have their own dignity, but will also have their own limitations. Hence, in this book we have introduced a system of self-explanatory symbols which can be understood without any special effort. We have utilised the symbols like subscripts, superscripts, and slashes to denote the movement of the notes in the context of the Raga. 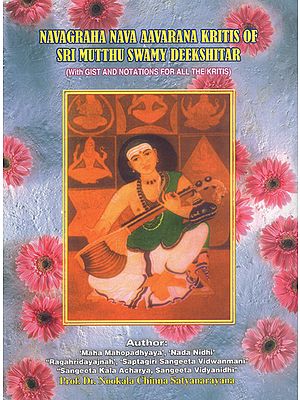 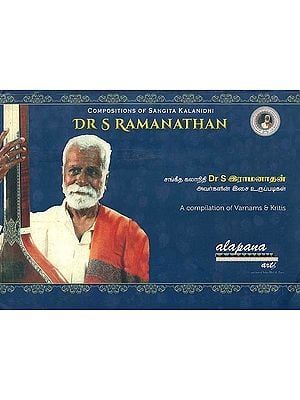 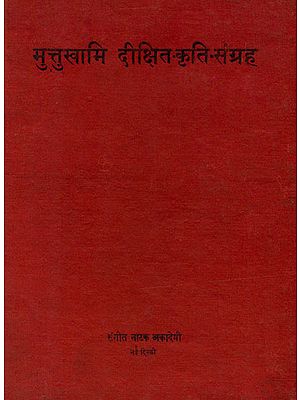 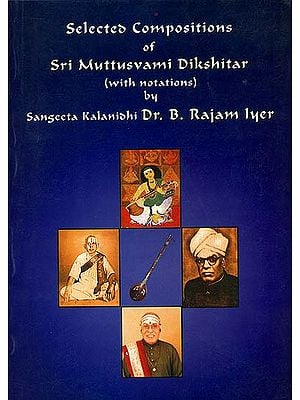 Selected Compositions of Sri Muttusvami Dikshitar (With Notations)
By Sangeeta Kalanidhi and DR. B. Rajam Iyer
$29
Out of Stock 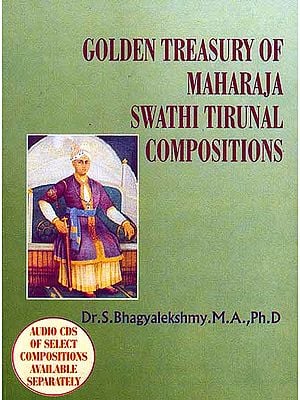