The book 'Compositions of The Great Tabla Maestros' entirely comprises of eight chapters out of which six chapters are concerned with the compositions of the various Gharanas of Tabla and remaining two chapters elaborate the brief history of Gharanas and the Taal compositions created by Hazrat Ameer Khusro respectively. I tried my best to include the rare compositions of the eminent maestros belonging to the various Gharanas along with the full characterization of the Bandish. In the first chapter of the book the brief of the development of the Tabla Gharanas is fairly interpreted. In the next six chapter the features of all six baaj (s) are explained. Moreover I included almost 256 compositions in the book but there is another last chapter which introduced the composition of Hazrat Ameer Khusro. The contribution of Hazat Ameer Khusro is Indian Classical Music leave a great impression on the minds of readers of the book. I concluded the history of Tabla and development of the art of the Tabla in the last chapter. I hope this book will be proven as the milestone in the history of Tabla for the academic purpose.

Accomplishments
Solo and Accompaniment Performances in the program 'Phulwari' in Lucknow Doordarshan since 1978, in 1979 in Begam Akhtar Sangeet Samaroh, Ayodhya for Tabla Solo and Violin Sangagat. He was honoured by a renowned Pakhawaj player Dr. Swami Ramashankar 'Pagaldas', Presentation of his art in AIR Allahabad in the program 'Yuva Vani' Since 1988. The regular 'B-High' grade artist of AIR Agra since 1995, Honored by Swami D.R. Parvertikar Sangeet Sansthan, Mathura in 2004, The presentation of Tabla concert in "SPIC-MACAY", "TAJ MAHOTSAV", LUCKNOW MAHOTSAV" and Governor House Lucknow, accompanied with Ustad Mushtaq Husain Khan, Ustad Shafi Ahmad Khan, Prof. L.K. Pandit, Dr. Mausmi Roy, Ustad Rafat, Pt. Ashok Goswami, Ustad Zeeshan Mehndi and Ustad Gulshan Bharti etc. Acted as the examiner in Prayag Sangeet Samiti Allahabad and other universities since 1993. As a music Expert for selection of teachers of Navodya Vidyalaya. Given estimation and prestigious judgment for various musical competitions, including the competitions held under the auspices of Association of Indian Universities (AJU) New Delhi, Sanskar Bharti, Bharat Vikas Parishad, Atomic Energy Central School and Ahlcon International School, New Delhi and more. Got the achievement to be first author or penning the book on Tabla named 'Fun E Tabla' in Urdu language after 1906.

Experience
Served as Tabla player in Raja Mohan Girls PG College Faizabad (UP) and as a music teacher in Navodya Vidyalaya, Doda (Jammu & Kashmir) for a period of six years. Presently has been working as an Instructor of Music (Tabla) in Cultural Education Center, AMU Aligarh since 1992.

With the blessings of Allah and his beloved Prophet Muhammad (peace and blessings upon him) and the benediction of my teachers I feel very delight to present the first edition of my fifth penning "Compositions of The Great Tabla Maestros" for the readers. My friends and disciples drew near me to collect the compositions and opuses of various Gharana to give them a shape of the definite document i.e. a form of the book. Therefore I feel the honor to do such a big work. It is my pleasure that I got the opportunity to become the disciple of a famous Tabla masestro Khalifa Ustad Afaq Husain Khan (Lucknow Gharana) and to learn a little bit of the compositions of Lucknow Gharana created by the legends of this gharana. I aim to bring out the students of Tabla who do not have the opportunity to go through the rare compositions of various schools of Tabla. After reading this book Insha' Allah they will be capable to play these rare compositions of six various Gharana(s) with the help of their teachers and trainers.

I tried my best, to collect the compositions of the six Gharana(s) after calibrating the magazines and other Tabla books very deeply; and having the talks and discussions with the legends of various Gharana(s), to text the book. The folios largely reckon on the narrative descriptions of the compositions such as Peshkar, Qaida, Raila, Gat, Tukra, Chakkardar, Tihai, Tripalli and Chaupalli etc. I tried my best to comprise 256 compositions in the volume after giving mind to the composition of six different Gharanas. The Peculiarity of the book is very big accomplishment as I also have mentioned the names of the Ustad (masters of the Gharanas) with their own shaped compositions.

Notwithstanding publishing a large number of the musical books, my first ever book 'Fun-E-Tabla (Urdu)', the one and only book in Urdu language published after 109 years, was appreciated very much by the readers. My other penning Tabla Sanchayan (2012), Tabla Mein Das Anko Ka Mahatava (2013), and recently published in 2014 'Bhartiya Talon Mein Theke Ke Vibhin Sworoop' were popularized in the world music culture exceedingly, I am very much delighted that the readers eulogized all my works. Insha' Allah I'll endeavour to deliver the ameliorative ideas concerning the instrument as I get the perfect and authentic suggestions in the future.

I have the conviction that my fifth book "Compositions of The Great Tabla Maestros" will be proven very utile for the lovers of music, musicians, teachers, peoples of the academic world, students of the universities and the artists as well. I beg pardon for the errors existing anywhere in the presented book. Thereby hangs a tale if there will be any suggestion, I heartily welcome them.

If the presented book is proven very useful for the disciples who are learning, I'll presume that my exertion is meaningful. 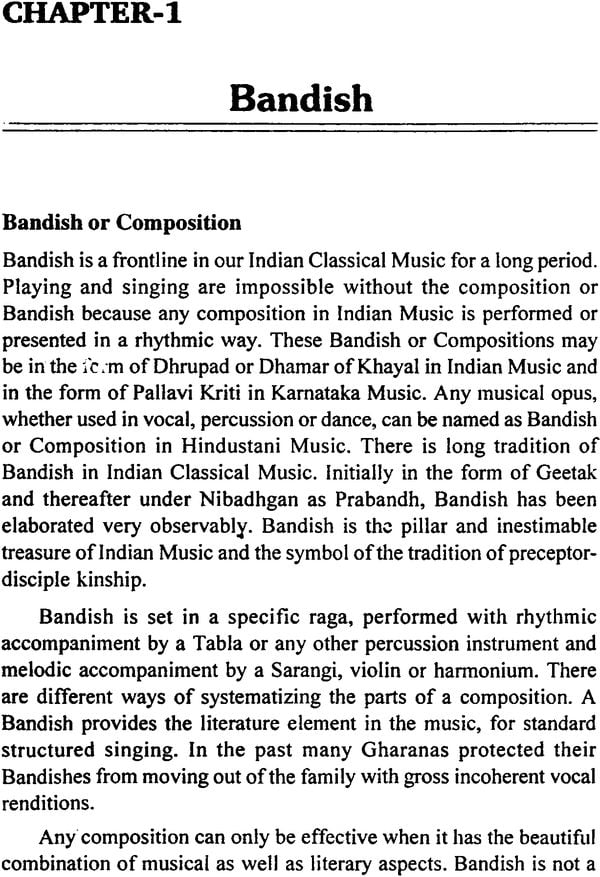 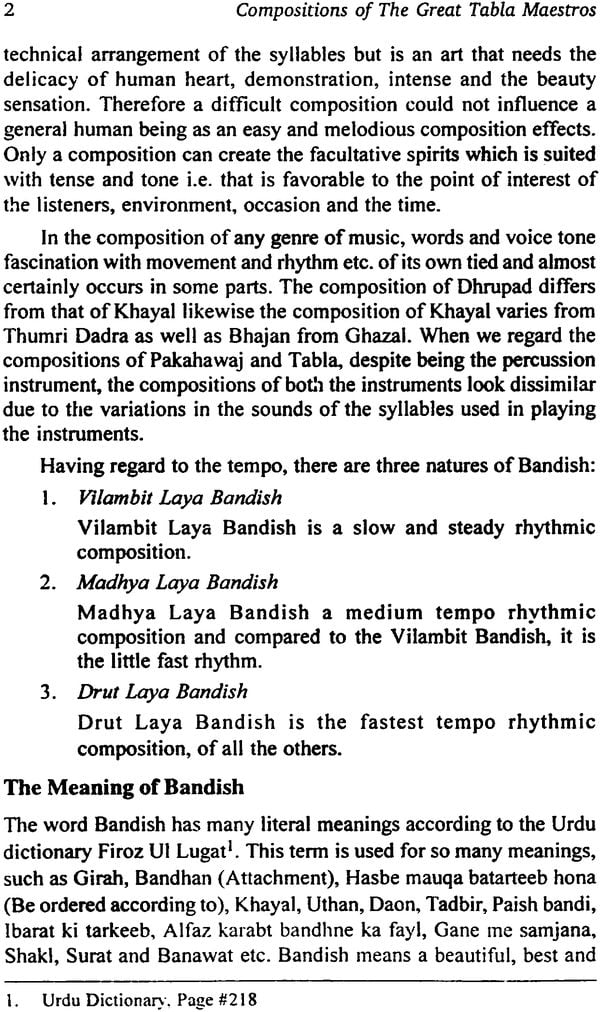 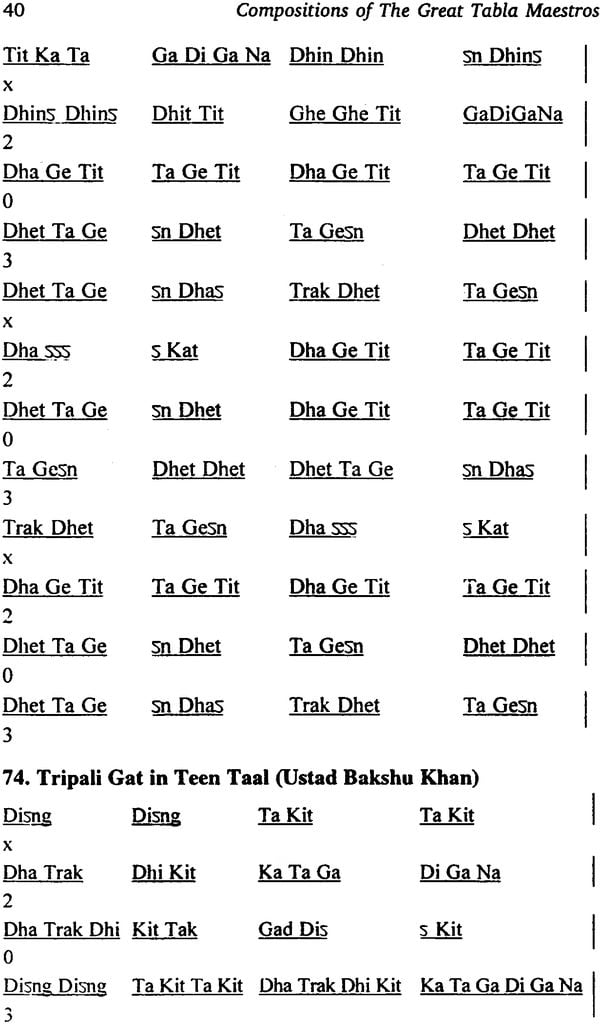 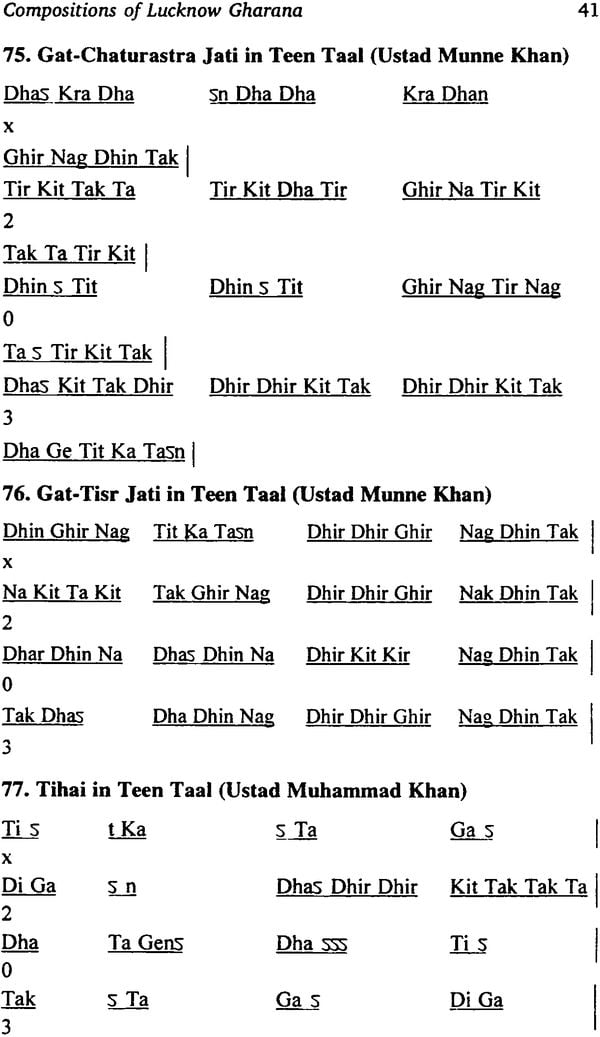 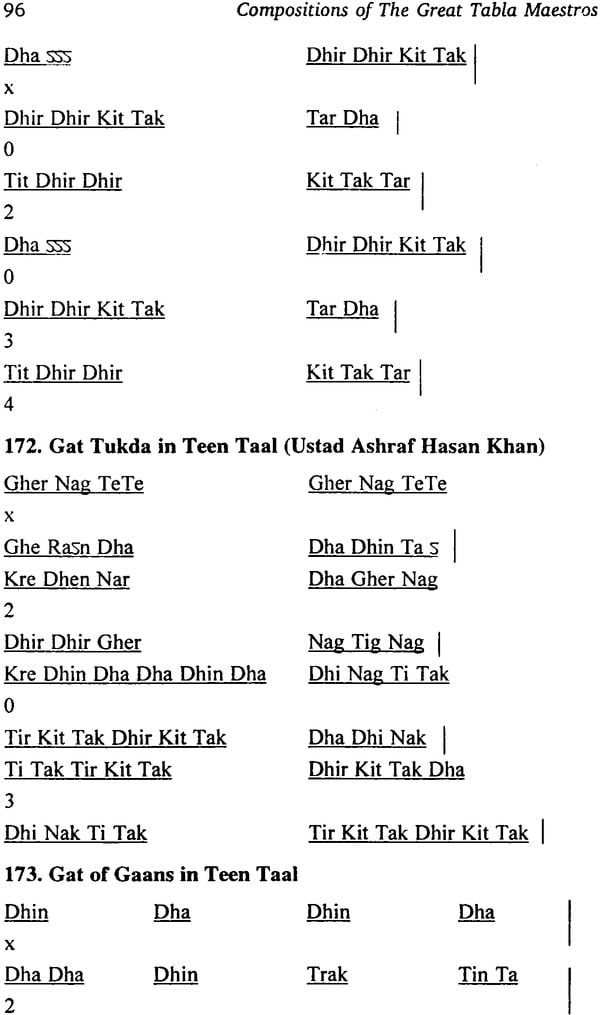 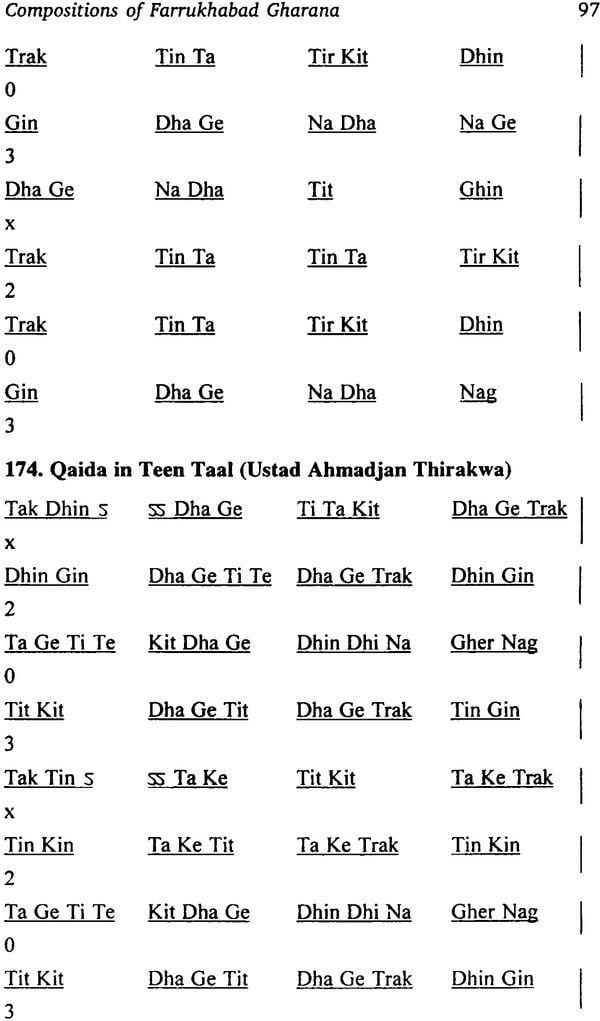 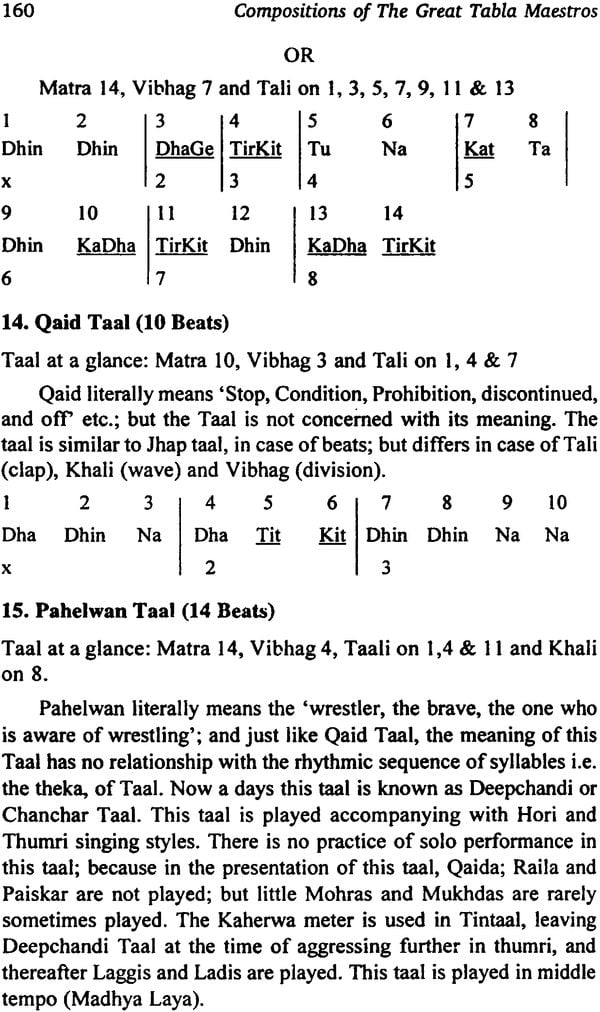 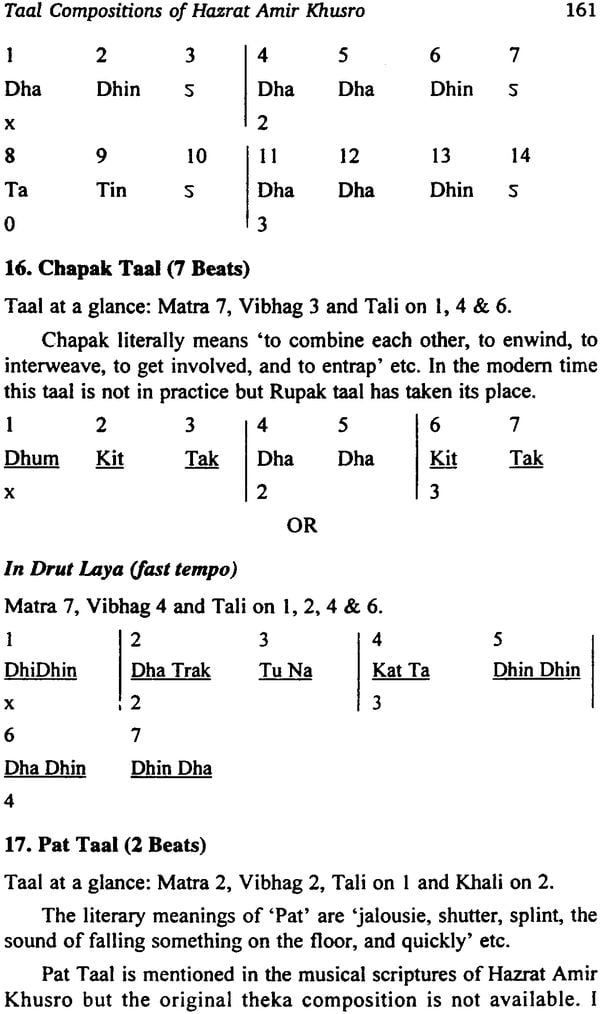 Theory and Practice of Tabla
By Sadanand Naimpalli
$39
FREE Delivery Yet Another Garland (Biographical Dictionary of Carnatic Composers & Musicians)
By N. Rajagopalan
$43
Out of Stock The Raga-ness of Ragas (Ragas Beyond the Grammar)
By Deepak S. Raja
$59
FREE Delivery