$41
Quantity
Notify me when this item is available

Krishna, one of the most beloved characters of the Hindu pantheon, has been portrayed in many lights; a god-child, a prankster, a model lover, a divine hero, an exemplary ruler, and the Supreme Being. I The Complete Life of Krishna, Vanamali, a leading Krishna expert form a long line of prominent Krishna devotees, provides the first book in English or Sanskrit to cover the complete range of the avatar’s life.

Drawing form the Bhagavad Purana, the Bhagavad Gita, The Mahabharata, and India’s sacred oral tradition, Vanamali shares stories form Krishna’s brith in d dungeon and early days as a merry trickster in Vrindavana, thought his time as divine ruler at Dwaraka, to his final powerful acts as the charioteer and guru of the hero Arjuna during in the Kurukshetra war. She explains how Krishna became a mahayogi, the greatest of all yogis, and attained complete mastery over himself and nature. By integrating the hero-child with the mahayogi, the playful lover with the divine ruler, Vanamali shows how the stories of Krishna’s life are expressed with such simplicity and humor that they enable anyone-man, woman, or child-to see the wisdom of his teachings

This complete biography of the man who was also a god provides a valuable meditative tool allowing Krishna’s lessons to illuminate form within.

Mataji Devi Vanamali has written 7 books on the gods of the Hindu pantheon, including Shakit, Hanuman, and The Song of Rama, as well as translating the Bhagaved Gita. She is the founder and president of Vanamali Gita Yoga Ashram Trust, dedicated to sharing the wisdom of sanatana Dharma and charitable service to children. She lives at the Vanamali ashram in Rishikesh, in northern india.

It pleases me immensely to know that Devi Vanamali, the author of this admirable book on the life of Bhagavan (Lord) Sri Krishna, wants me to write a few words by way of an introductory appreciation and sugges-tion. I have gone through this book carefully, and my first impression after reading it was that this is the first attempt perhaps ever made by a scholar-devotee to present in one compact volume the multifaceted and majestic life of the Great Incarnation. What charmed me especially was the perspicacious and deeply touching style and expression in which the whole story is told so beautifully and so comprehensively.

Usually devotees of Lord Sri Krishna confine their attention to the childhood and boyhood days of Krishna in Gokula, Vrindavana, and Mathura, and even if these accounts are a little more extended, the writings generally add only the events in Dwaraka, of Sri Krishna's regime and his social greatness as delineated in the Srimad Bhagavata Mahapurana.

Very few pay sufficient attention to the wonderful deeds of the towering Krishna of the Mahabharata, without which facet his great life story would remain incomplete. It is delightful to observe that Mara Devi Vanamali has not omitted any salient feature and has man-aged to press into her book the essentials of the story as we have it in both the Srimad Bhagavatam and the Mahabharata.

The divine play of the child in Vrindavana, the serious posture of a mature potentate in Dwaraka, and the transcendent power exhibited in the Mahabharata constitute the three sections in the book of Sri Krishna's life. The author of this book is not merely a devotee in the ordinary sense of the term, but one who has endeavored to saturate her very life with Krishna bhakti, due to which specialty in her the work glows with a fervor of spirit and a radiance of clarity in presentation. A book written by a seeker who veritably lives in the presence of the Lord will no doubt exert a magnetic influence on every reader of this divine saga, this chronicle of God some fully in visible form.

A reading of the life of Sri Krishna will not only be a rewarding treat, as an enchanting vision of the deeds of the Divine Superman, but also charge the reader's personality with an energy and vigor not to be had on this Earth.

May works of this kind see the light of day in more and more num-bers, for the blessing of all humankind.

Hinduism is not a historical religion. If somebody were to prove condu-sively that Krishna, Rama, and the various gods of the Hindu pantheon never existed, most Hindus would not mind in the least, and the religion would continue to flourish as it has done for so many centuries. However, m the devotees of Krishna, he is as real as any of their friends or rela-tives or children, depending on how they regard him-as friend, relation, child, or lover. This being so, most Indians have not bothered to verify his existence. This may seem strange since there have been countless devotees of his who have heard the haunting melody of his flute calling to them across the centuries and even seen glimpses of his tantalizing form. But there is a failing in the Indian mentality, which considers historicity to be of least importance. What is more important to us is the impact that such a being has had on US. Krishna has shaped the trend of our culture, our art, music, and sculpture over the centuries, and this is enough for us. The very fact that the stories of Krishna have stood the challenge of centuries should have proved to us that such a personality did indeed exist in solid flesh and blood at the time given in our scriptures. The modern mind has a scientific bent, and our generation should have tried to pull aside the veil of the centuries and found out the truth about our favorite god.

But unfortunately, the modern educated youth of our country have been fed a pack of lies through our history books, which were written by Western orientalists with vested interests. Oct youth have been brain-washed into believing that our scriptures are all filled with absurdities and at best can only be typed as myth or fantasy. However, the fact is that our Puranos are true records of our glorious past. When the English first came to India, they were shocked to find that, if the dates given in our Puranoe were true, Indian civilization predated theirs by thousands of years. They refused to accept the fact that a glorious civilization flour-ished in India at a time when Europe was filled with barbarians clothed in skins, flourishing crude weapons. Thus they labeled as myth all his-torical evidences in the Hindu scriptures, especially in the Puranas.

Brainwashed by the views of the Western historians, we have for-gotten to look at our scriptures with an unprejudiced gaze. If we did so, we would realize that Vyasa, the author of the Mahabharata, was a con-temporary of Lord Krishna and was actually describing events that he had observed himself and in some of which he had played an important part. But unfortunately, as I said, our Puranas have never been recog-nized as a true record of our history by Western historians but have been dumped into the category of fable and fantasy. This type of classifica-tion had been done by the British colonial scholars whowere in reality missionaries who did not want Indian history to clash with the views of the Bible. Destroying the historicity of Krishna was an important part of their campaign to establish their one religion in India. To give them their due, it might be possible that they did not understand or realize the depth and wisdom that was embedded in the Hindu scriptures. The sad fact is that the Indian historians, who should have known better, blindly copied the facts given by the Westerners in their books. Early Western Indologists in their missionary zeal tried to put down the importance of the Vedas as well. They labeled them as primitive mythology.

The story of the Lord's manifestation in the world as Krishna, scion of the Yadava clan, is one that has thrilled the hearts of all those who fume been fortunate enough to hear it. It is the glorious tale of how the one who is aja, or unborn, and arupa, without form, was born with a form, in this world of duality, and has delighted the hearts of peo-ple for over five thousand years. It is the story of that infinite, eternal one, who was born in a dungeon as Krishna, the son of a Yadava chief, Vasudeva, and his wife, Devaki, and the nephew of Kamsa, the king of Bhojas. It is the story of how Krishna, a prince, was brought up as a common cowherd boy by Nanda, a chieftain, and his wife, Yashoda, in the village of Gokula. It is the story of the birth of God as a man. There is no tale comparable to it in all times.

The main facts of his life can be gathered from the Srimad Bhagavatam and the Mahabharata-the first half of the story from the former and the second from the latter. He was born in captivity in the prison of the tyrant king Kamsa of Mathura, as the son of Vasudeva and Devaki, sister of Kamsa. Immediately after birth, he was trans-ferred from Mathura to the cowherd settlement of Gokula, where he grew up as the foster son of their chief, Nanda, and his wife, Yashoda. As a child, he was mischievous and willful, charming all with his pre-cocious acts. At the age of twelve, he went to Mathura, where he killed his uncle Kamsa, thus freeing the Yadavas from the rule of the tyrant.

He grew up to be a hero, valiant and invincible, and gra.dually assumed leadership of the Yadava and Vrishni clans, even though he did not accept the title of king. He defeated many of the tyrant kings and made the Yadavas into one of the most powerful forces of his time. He founded his new capital on the island of Dwaraka, on the western seacoast of India, which was then known as Bharathavarsha, and played an important part in shaping the cultural and political life of his times. Though he did not take up arms, he played a decisive part in the great war of the Mahabharata. Ass man, he was a mahayogi, the greatest of all yogis, totally unat-tached, having complete mastery over himself and nature, capable of controlling the very elements, if need be. His miracles were only an outflow of his perfect unity with God and, therefore, with nature. The spiritual gospel that he taught is known as the Bhagavata Dharma and is chiefly expounded in the Bhagavad Gita, the Uddhava Gita, and the Ann Gita. The simplicity of his teaching was such chat it could be followed by any man, woman, or child, unlike the Vedic teachings, which were meant only for the elite. The Vedic religion had elaborated into a vast system of complicated sacrificial rituals that could be dud-phered and performed only by the Brahmins and conducted only by Kshatriyas. Out of the Vedic religion had developed the glorious phi-losophy of the Upanishads, which required high intellectual ability, moral competence, and training under a qualified spiritual preceptor, or guru, before it could be comprehended. 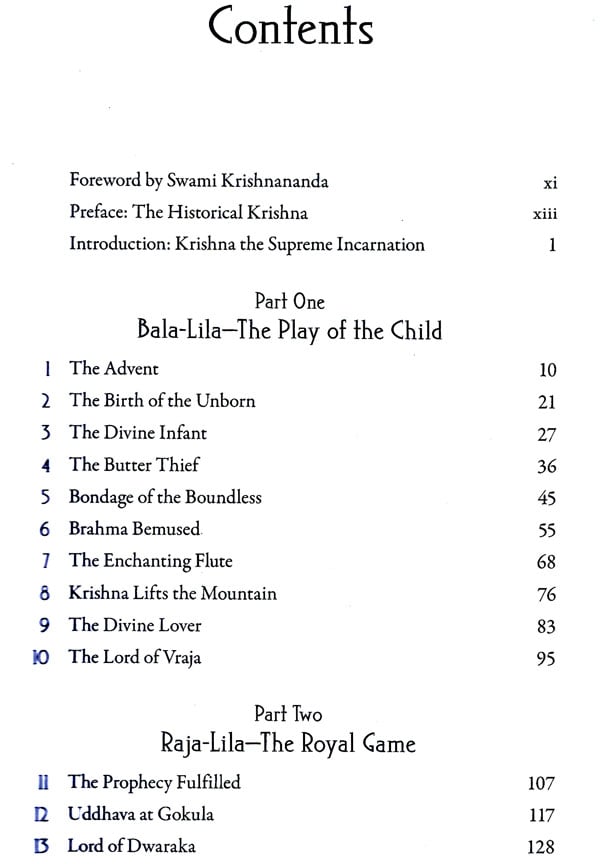 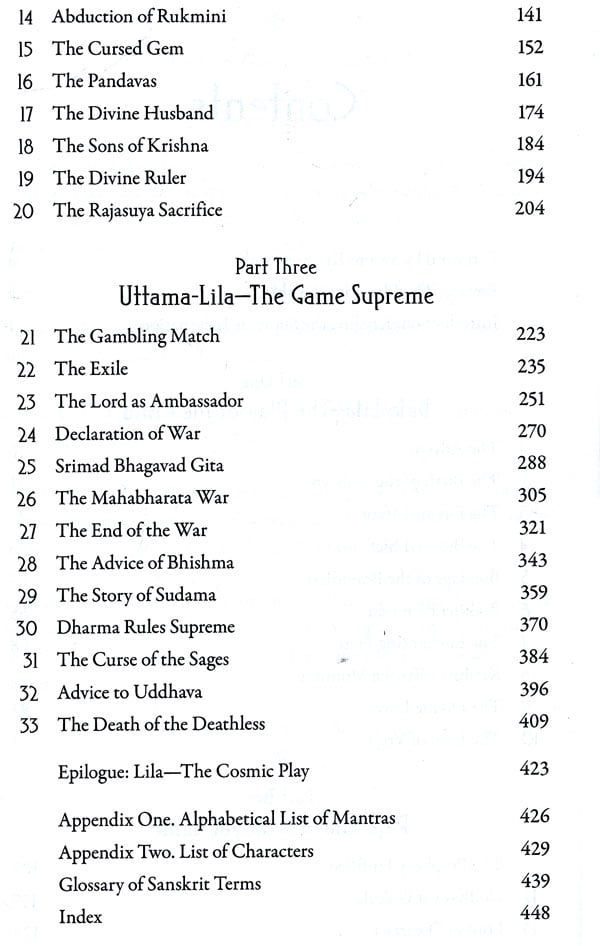 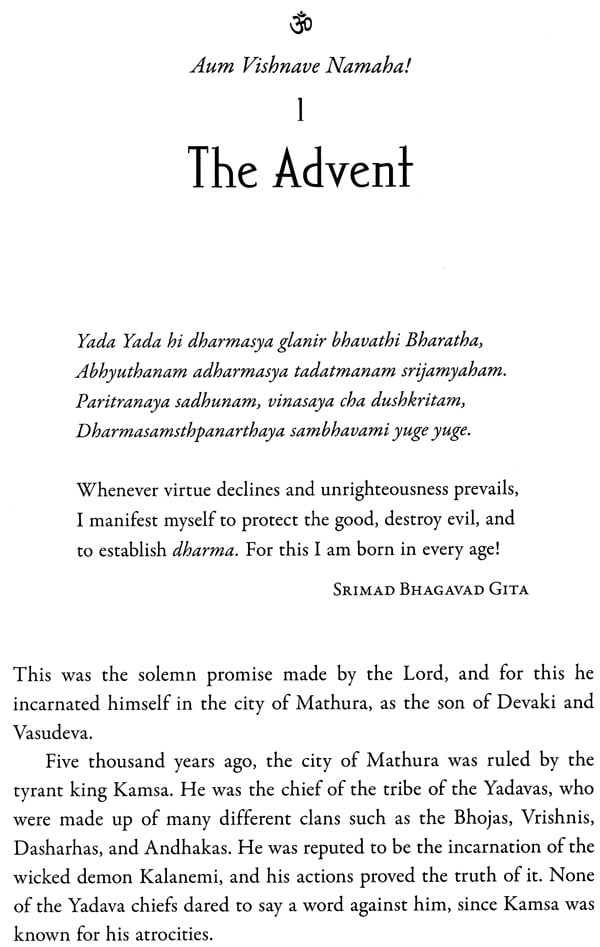 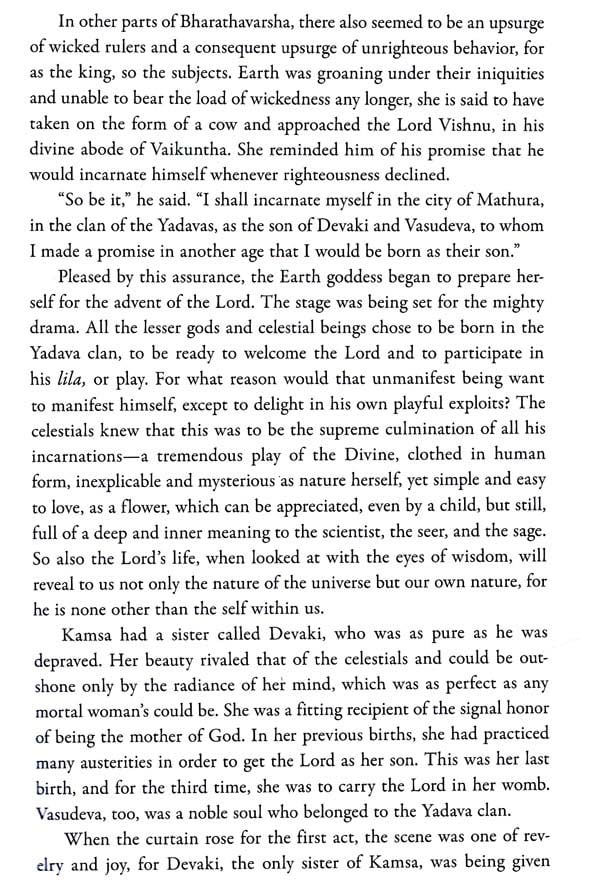 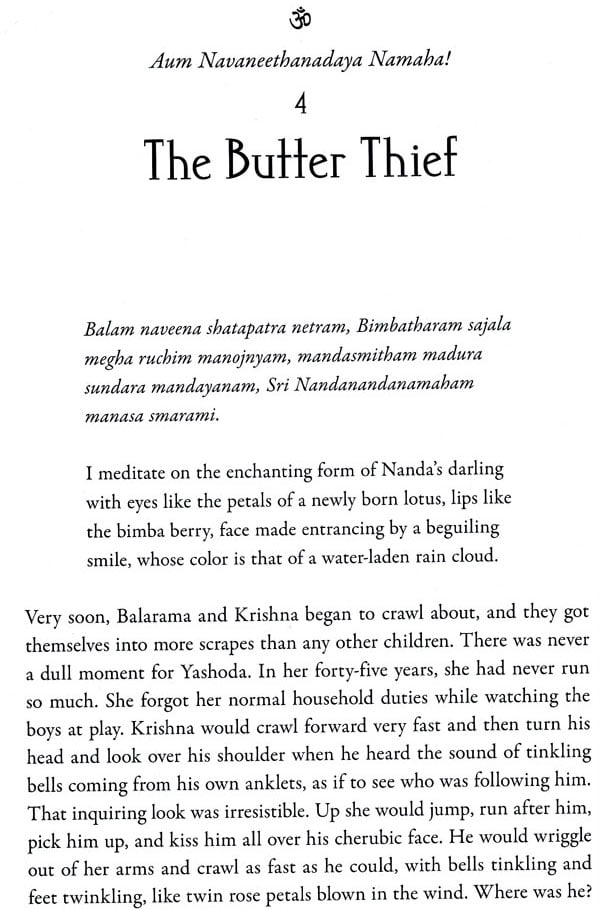 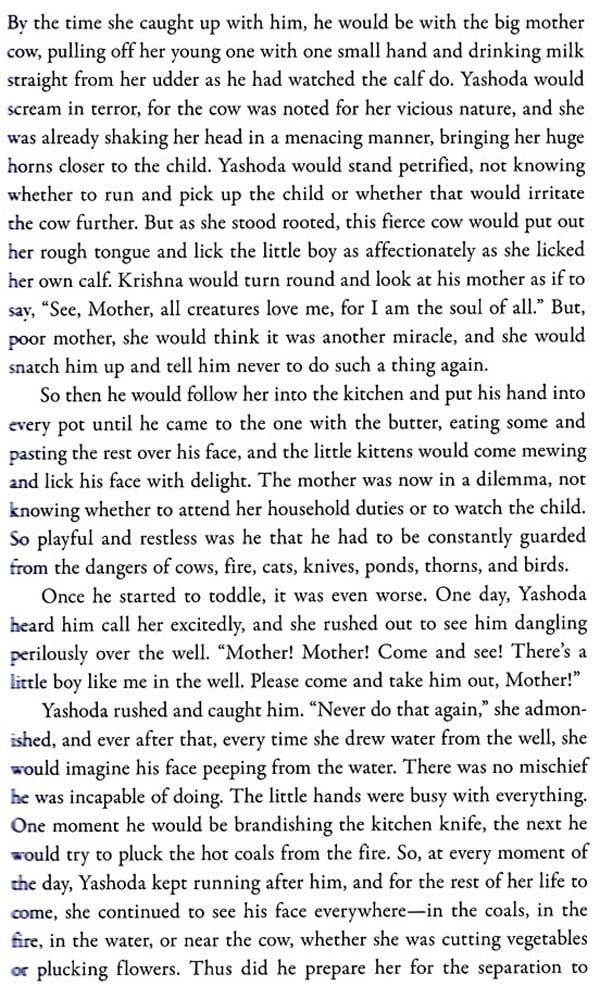 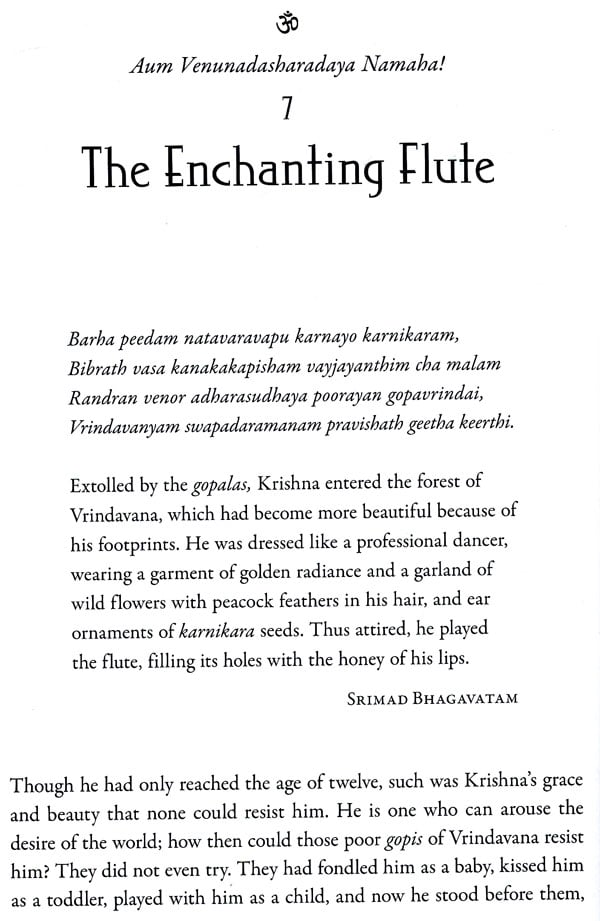 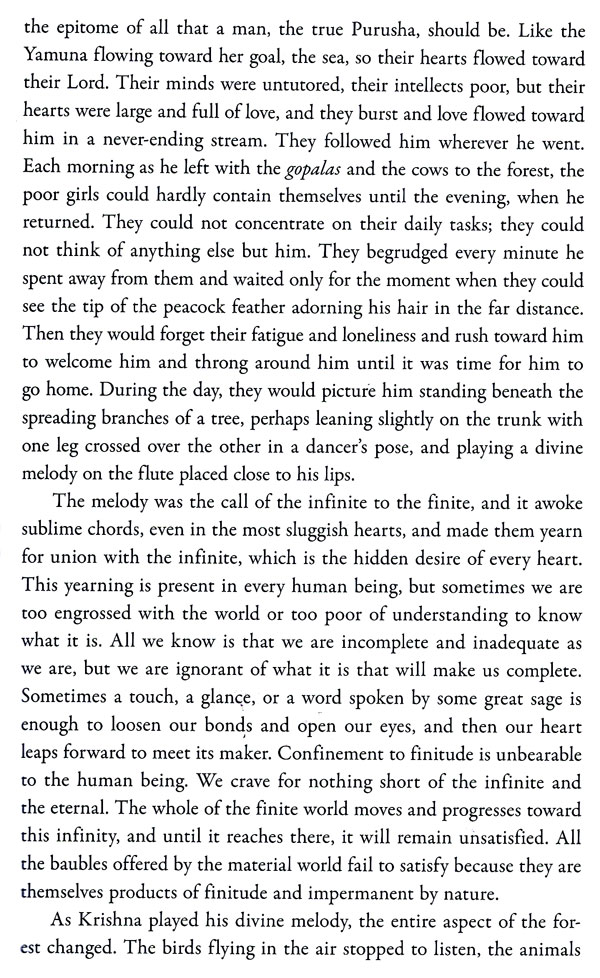 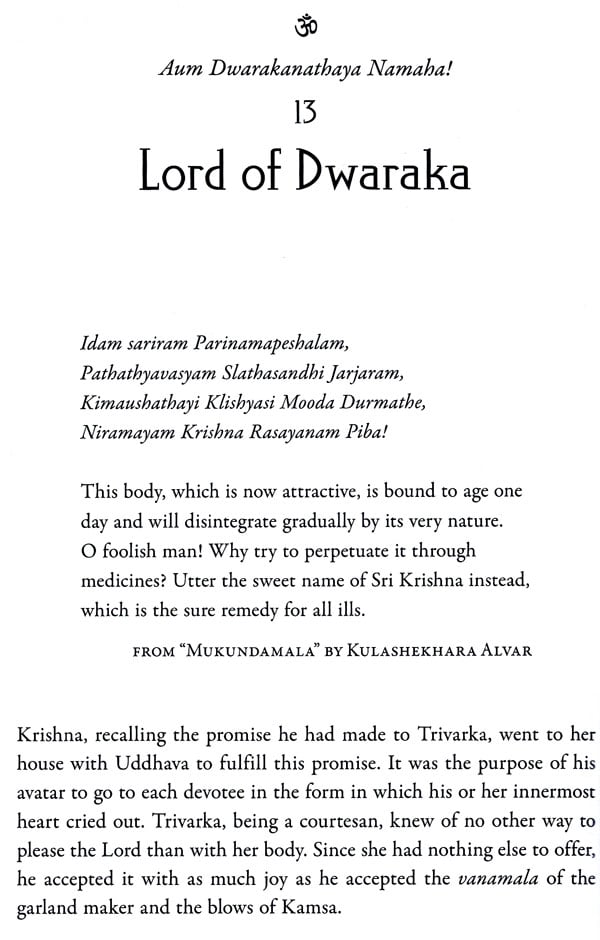 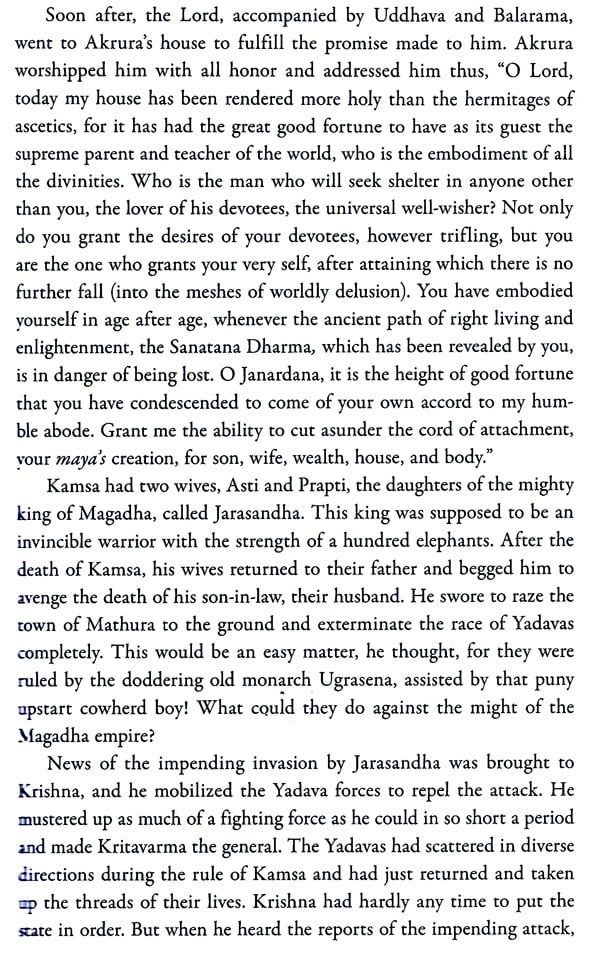 Adventures of Krishna (3 Illustrated Classics from India: Krishna and Narakasura, Krishna and Jarasandha and Krishna and the False Vaasudeva)
By Anant Pai
$24
FREE Delivery 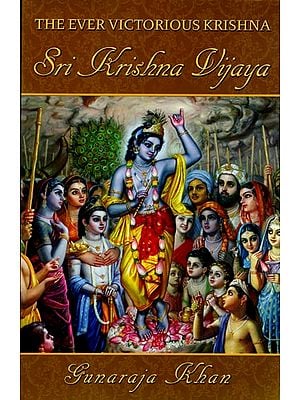 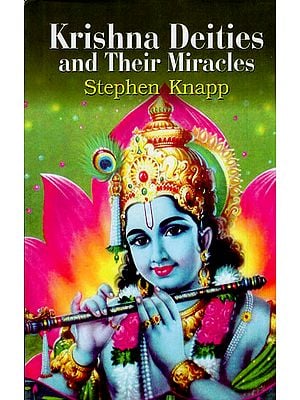 Krishna: A Journey Through the Lands and Legends of Krishna
By Dev Prasad
$33
Out of Stock 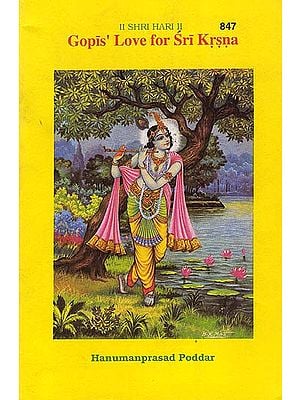