$20.00
Usually ships in 15 days
Notify me when this item is available
Save to Wishlist Send as E-card Share by Email
Back of The Book

What is the source of mesmerism of this name and personality? Even a slight acquaintance with her life will make us realize that this mesmerism does not proceed from any aspect of her personality which the modern world recognizes as significant in woman. To all outward appearances the Holy Mother was just ordinary, or even less than ordinary. Rustic in simplicity, almost unlettered, shy and modest, she was far removed from the educated, self-conscious, active type of modern women. And yet her life finds powerful responsive echoes from the hearts of all men and women, rustic and modern alike. It is evident that she had captured in her life and being the fundamental value which lies at the back of the womanliness of woman and which transcends all distinctions based on mere sex and attractions thereof. This fact alone explains her universal appeal, representing, as she does, not a mere national or racial type, but the fulfilment of woman as woman, the realization in flesh and blood of the Eternal Feminine.

This is the first complete biography of Sri Sarada Devi seeing the light of day. The author got refuge at her feet on 29 December 1918. From some time before this day onwards for about twenty years, the author was fortune to intimately interact with her disciples and contemplate on her life story. Owing to this, the Mother’s image that had taken shape in the author’s mind, the author has made an attempt here to present that in his own words. It is, in fact, she who has been the inspiere-She being the inner-ruler of all.

The motivation to take up this venture came from her disciples and devotees. When the author went to Dr. Surendra Roy of Barisal with the intention to compile some information from him about Swami Saradananda, some information about the Mother also was collected. Surendra Roy, furthermore, requested the author to also collect the heretofore unpublished facts about her. That was the day of the Chariot Festival in the year 1934. Two years after this, having been inspired by the author’s brother-disciples Surendra Sarkar and Shrish Ghatak at Ranchi, he resolved to pen a complete biography of the Mother, even in the face of innumerable impediments.

The Material Some of the important events from the first half of the Mother’s life are found recorded at places in Sri Sri Ramakrishna Lila Prasanga and Sri Sri Ramakrishna Punthi. From Sri Sri Mayer Katha also we come to know, in a scattered way, many of the incidents from her life. In the writing of this biography we have taken the help of these books.

A major portion of the material for this book has been collected from the Mother’s disciples. For this the author had to go about different places from Kanpur to Rangoon, and also interact or correspond with about two-hundred devotees.

Among her disciples, there were many who had the good fortune of seeing her just for a day or two. These devotee have not been able to tell us anything more than just few instructions they received from her or a few points about her these pieces of information provided by them are bleak. Those who got a chance to meet her very often owing to their proximity to her place of residence, and also those who came and stayed with her for about a fortnight or so, to them the Mother, of her own accord, used to tell about many of the incidents from her life, and they too would plead her to tell more about herself. It is with regard to these pieces of information that there are probabilities of mistakes, provided they were noted down within a short period of their revelation. We have received both written as well as verbal pieces of information, and we have attempted to make the material for this book flawless by even combining, wherever possible, the different versions of the same incident.

The Mother’s Vocabulary At the time of her stay in the country side, especially in her interaction with the native people, she used to speak to them in the language that was in vogue in that place. On the contrary, during her stay in Kolkatta, she spoke in the language current in that place, and this was especially so when she interacted with the people staying there. Nonetheless, even while speaking in the vocabulary of the people of Kolkata, it was not unnatural for the tinge of the native language to blend with it some extent. In this book the Mother’s spoken words, which the devotees and disciples have provided us, have been presented almost just as they were given to us, without any alteration…….

The approach in writing of this biography Just like the Master’s life, even in the Mother’s life we find human and temporal events occurring side the divine and super-sensorial. In spite of the human aspect being predominant, wherever her inner divinity is seen to be naturally and easily manifested rending the human covering, wherever there is a sweet blend of the temporal and the transcendental, wherever the human and the divine aspects mingle inseparably, the attempt to sieve off the transcendental divine aspect and present only the human aspect of her character is quite unnatural. In fact, there doesn’t seem to be any special significance in such an approach. While narrating the divine sport of the Mother, at many places we have been able to see her “Divine-human” from, and we have made an attempt here to present that, following the footsteps of the author of Sri Sri Ramakrishna Lila Prasanga, Swami Saradananda.

Concluding Words With this book is associated the enthusiasm of many of the monastic as well as the householder disciples of the Mother. It was owing to their unflinching devotion to, and love for, the Mother that they have voluntarily helped the author in diverse ways. Among all of them the names of Ganendranath, who was the Mother’s attendant, as well as Indubhushan Sen Gupta, deserve special mention. Bankimchandra Mukhopadhyay has put us in debt by presenting a detailed description of the Mother’s horoscope.

It is a matter of delight as well as pride for us to place before the readers the English version of the first and the oldest complete biography of Sarada Devi- the Holy Mother. Originally titles Sri Sri Sarada Devi and authored by Brahmachari Akshaychaitanya, it was first published in Bangali in the year 1937 by the Kolkatta Book House, Kolkatta. The book has successfully run into thirteen reprints since then, vouching for its popularity among the Bengali readers. The author was the disciple of the Mother. He had come into contact with her towards the last part of her life. He also had the good fortune, as he states in his “Note”, of interacting with a large number of her devotees and disciples-monastic as well as lay. The genesis of the original book has been briefly sketched by the author in his Note.

Swami Tanmayananda translated this book into English and published it first 2002 from Persatuan Sri Ramakrishna Sarada Malaysia, Malaysia, under the title The Compassionate Mother Sri Sri Sarada Devi. The present book is it revised second edition brought out by us under the title The Compassionate Mother-The Oldest Biography of Sri Sarada Devi. The book was revised and edited by Swami Shuddiananda of Advaita Asharma. The work of revision has amounted to retranslation of the entire book for well-founded reasons, which the Swami has done meticulously. We are thankful to him for the same.

As it is, it needs to be brought to the reader’s attention that in every sense the biography written by Swami Gambhirananda, Holy Mother Sri Sarada Devi, is today considered to be the most authentic one. He took materials for his book from Brahmachari Akshaychaitanya’s work, as well as from other important sources. Evidently, in his biography, which was penned more than a decade after Akshaychaitanya’s work, we find the incongruities in narration and versions found in the latter’s work resolved. Therefore it is quite probable to find in the present book narratives which are slightly variant from the ones we find in the biography written by the editor by referring to them in the footnotes. Even then, if the readers come across in this book anything which deviates from the biography written by the Swami, they should follow the latter’s version for all literary purposes.

Be that as it may, in spite of divergences in narration and dates etc., the value of this book is not diminished in the least, which would be clear to the readers as they turn its pages. A major portion of this work is comprised of the reminiscences of the Mother by her disciples and devotees. These are a treasure of spirituality. Through these the mesmerizing facets of the Mother’s personality come to the forth, which surely would touch the spiritual cord of the reader’s heart. We consider this book to be important more for its inspirational value than for the flawlessness of its chronicle.

The Bengali dialect of the Mother’s time is no more in vogue. As such, there are some obscure passages in the original Bengali version which needed a considerable amount of digging to unearth their most proximate meaning. Mr. Pronab Goswami, the Librarian of the Advaita Ashrama, has wholeheartedly helped the editor by supplying him with appropriate books at all hours as well as with personal suggestions. Swami Apteshananda of Advaita Ashrama also eagerly helped the editor to grapple with some of the unclear portions. The entire manuscript needed to be freshly typed and proofread, which was gladly done by Brahmachari Yogadachaitanya, also of Advaita Ashrama. We extend our heartfelt thanks to all of them. We are also thankful to Mr. William Page, a long-standing devotee of Sri Ramakrishna, for his editorial suggestions.

The original Bengali book contains a detailed description of the Mother’s horoscope as well as an article on her written by the author in 1954, which was then published in Ananda Bazar Patrika. We have omitted these. Some portions of the Mother’s life have been narrated by the author in poetic from. These have been rendered into prose for the easy comprehension of the readers will come across initials enclosed in square brackets, e.g.[A]. For their meanings, they should refer to the list of abbreviations. The book has copious footnotes supplied by the author as well as the editor. The notes given by the editor have been underwritten as belonging to him; all the other notes are the author’s. There is a glossary at the end of the book. In its preparations we have consulted A Concise Encyclopaedia of Hinduism by Swami Harshananda.

Sarada Devi’s life, with its apparent rustic simplicity, was an enigma even to those who lived in her proximity, so much more has it been so with the generations that followed her. Every time we sneak down the trail of her life, we are baffled to see the play of light and shade, divine glory and human frailty, enacted hand in glove. Yet it speaks volumes for all human race today needs to imbibe to enrich itself, spiritually as well as humanly. We do not venture to speak here more about this personality, for which we invite the readers to peruse the book themselves. We are sure this book would be well received by them. 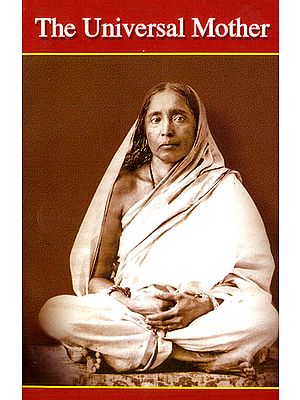