One criterion for seeing at a glance who is in power in a country, is: whom can you not criticize? Hindus are certainly not in power in India: it is the done thing to blame them left and right. This anti-Hindu discourse, more than the legal discrimination against Hinduism, is the main reason why many groups hurry to claim a non-Hindu status. Not just Sikhs, neo-Buddhists and Jains claim they are not Hindus, but even many Hindus who insist on being called "spiritual" rather than "Hindu", a term that carries negative connotations. Communal violence in history as well as in contemporary society is one field where the guilt of non-Hindus is denied or is even shifted to the Hindu side. In religious riots blamed on the Hindus in screaming headlines, the judicial enquiries sometimes end up revealing that the allegations against the Hindus were false, but these findings are not given the publicity that the allegations had initially received. In the foreign media, they are not even mentioned, so that the anti-Hindu impression that world opinion came away with, is still there. By contrast, crystal- clear cases of non-Hindu guilt are explained away or relativized. As shrill and dramatic as the discourse on real or imaginary Hindu violence is, so minimalistic and quiet is the fleeting mention of non-Hindu riots and bomb attacks. The latter are automatically explained away, e.g. Kashmiri separatist violence against Hindus is blamed on the conduct of the Army of "Hindu India", or the Godhra arson-pogrom on Hindu pilgrims was arbitrarily blamed on Hindus dragging a non-Hindu into the train. So, if Hindus do something, they are blamed, and if they suffer, they are also blamed.

The present booklet is a chapter excerpted from the two-volume book The Saffron Swastika, published in 2001. It diagnoses the mechanisms behind communal violence and its digestion in mediatic discourse and public policies. Sadly, it describes phenomena just as real and prevalent today as when it was written. The silver lining is that it points a way out of this recurrent problem, a demanding but promising solution.

The present booklet was excerpted from my two- volume book from 2001, The Saffron Swastika: the Notion of "Hindu Fascism", viz. chapter 7, or p.720-831. It records a number of cases where academics and the media reported grossly unfairly on cases of communal violence, as well as the ideological mindset and political compulsions that have led to this reprehensible behaviour.

In the years that have passed, the patterns described here have been repeated again and again. In the famous Gujarat riots of 2002, killing some 1100 people, politicians and media outlets have systematically left out the Muslim initiative, killing 58 Hindus before the first Muslim was touched. Till today, they are reluctant to report that in court case after court case, Chief Minister Narendra Modi has been acquitted. Instead, they prefer to commit contempt of court by persistently blaming Modi. They also left out the evidence of a. remarkable Hindu self-control: the preceding months had seen a number of Muslim bomb attacks, including on the Assembly and Parliament of Srinagar and Delhi, yet Hindus refrained from retaliating. A few months after the Gujarat riots, a major bomb attack on the Akshardham Swaminarayan temple in Gandhinagar killing 30 Hindus was again left without reply, for the fabled Hindu self- control had been restored.

Among the waves of Islamic bomb attacks was one in 2006 on a string of places in Varanasi, including on the Sankat Mochan temple managed by my former landlord, Vir Bhadra Mishra. At least 28 people were killed in the holy city. Many South Asia "experts" on the RISA list (Religion in South Asia, an association of American Indologists) had lived in Mishra's guesthouse, Amar Bhavan, and they ostentatiously shed some crocodile tears. However, there as a hue and cry on the RISA list when I repeated the same condolence message but adding the motivation of the terrorists: Islam. Sometimes terrorists just strike without leaving their signature, but more often they leave letters or video messages emphasizing that they did it for Islam. It is therefore only a matter of taking Muslims at their word when we name and shame the terrorists' motivation: Islam. But these Orientalists want to be seen condoling the victims of Islam without ever mentioning Islam.

The Mumbai bomb attacks of 2008, killing at least 164 people (not to be confused with the 2011 Mumbai bomb attacks, killing at least 26), received more than usual attention in the West because among the targets was also a Jewish centre. Some Americans had the gall of calling this "India's 9/11", as if India has not been more often targeted, and since earlier, than America. The typical pattern of Islamic terror attacks, targeting a number of different places in a city at the same time, was first tried out in Mumbai on 12 March 1993, killing at least 257. In London, where the underground train system has effectively been the target of Islamic terrorism in 2005, killing 52, you can still take the underground without any security controls; in Delhi, by contrast, Islamic terrorism has struck with such frequency that every commuter at every metro station has to undergo security controls.

In Mumbai, the killing of a police officer who was known for his anti-RSS views was enough for some secularists to make the ludicrous allegation that the RSS had masterminded the attacks. Such deliberate attempts at misattribution are not that rare. In 2004, when the Madrid train system was the target of Islamic bomb attacks, killing 191, we saw our Flemish expert Prof. Rik Coolsaet (socialist, but in agreement with the Spanish conservative ruling party) on TV pontificating that this had to be the handiwork of the Basque nationalists of ETA. This group is indeed guilty of some terror attacks, before abjuring violent methods in 2011, but on a much smaller scale and without the tell-tale modus operandi, so this attempt to exonerate Islam didn't carry conviction. And of course, further investigative leads revealed the Islamic provenance of the bomb attacks. Note that the professor always hurries to whitewash Islam but had no qualms about (falsely) naming Basque nationalism as the culprit.

Sometimes the facts of the case are respected though a partisan spin is put on it. Sometimes an important phase of the violence, viz. the part with undeniable Muslim initiative and guilt, is obscured. But sometimes the facts of the case are simply misrepresented. In 2006, former President Bill Clinton wrote in a foreword to a book by his Foreign Secretary Madeleine Albright that the Chittisinghpura massacre of 2000, an attack on a Kashmiri Sikh village killing 36, was committed by Hindu militants, when in fact it was committed by the Pakistan-based Lashkar-e- Taiba, as was also admitted by the Pakistani-American terrorist David Headley (born Daood Sayed Gilani) in 2010. Clinton's mistaken view, which he refused to correct, exemplifies the international perception that Islamic terrorism is easily counterbalanced, and perhaps caused, by an equally virulent Hindu terrorism. It is not any non-existent original Western research into the matter that has given Westerners this idea; it is spoonfed to them by the Indian secularists who control the bottleneck of information on India.

Misdirection is the name of the game practiced by stage magicians. The media likewise misdirect the attention of the public towards imaginary problems (and other pastimes) to obscure the elephant in the room, Islamic terrorism. A favourite new one is the notion of "Hindu terrorism". At the time of writing, there are in this regard many allegations, some exploratory incarcerations, some press interviews claiming to have made the accused say what even police interrogators haven't been able to wrench out of them, but little definitive evidence. Islamic terrorism is a reality whereas "Hindu terrorism" is still up in the air.

To be sure, it is possible that some combative but desperate and unorganized Hindus have taken, or will take, to a tactic which they have so often seen being used by Muslims with great success. The more Muslims commit terrorism, the more Western politicians queue up before mosques to assuage the community's feelings and the more Indian secularists prove their resourcefulness by moving Islam's guilt elsewhere. Hindus won't get away with the same tactic, as the opinion apparatus has prepared the ground in favour of Islam, not of Hinduism. It is also silly to take recourse to this Islamic minority tactic when Hindus could have their way through the ballot box if properly knowledgeable and organized. And finally, Hinduism doesn't have a doctrine of jihad and is sparing with violence, so this senseless recourse to unnecessary violence is un- Hindu at heart. 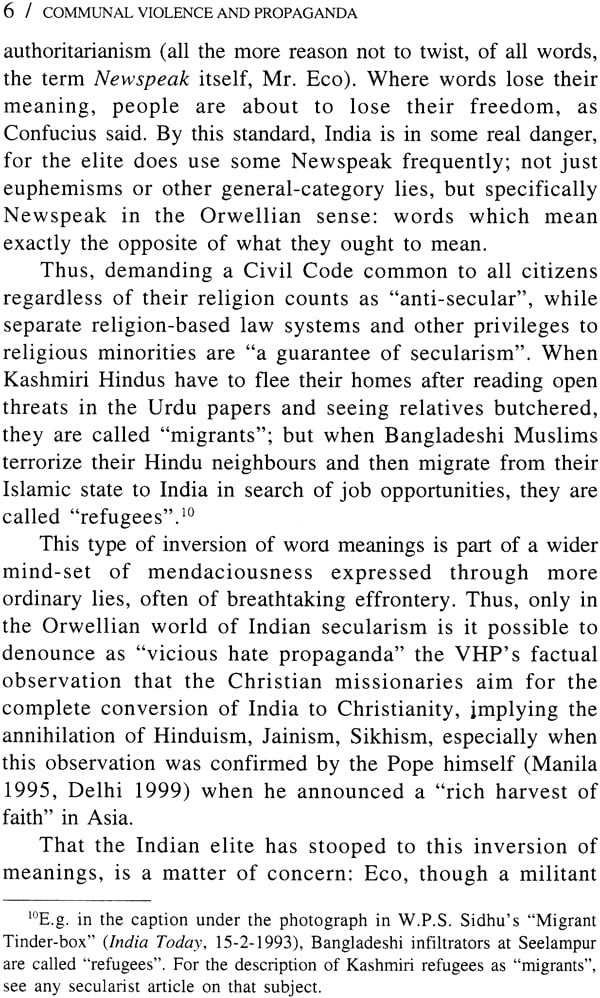 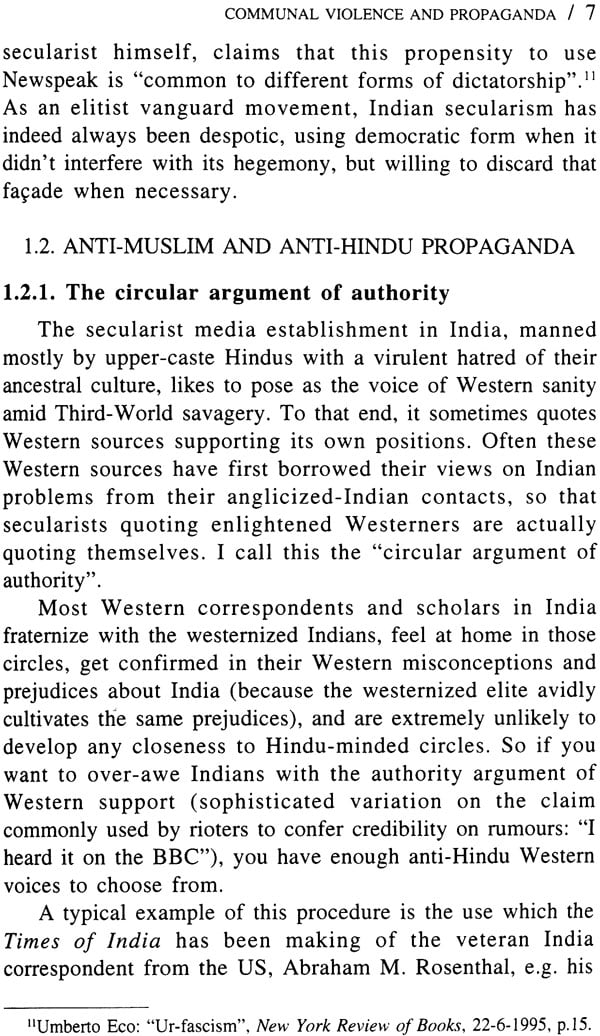 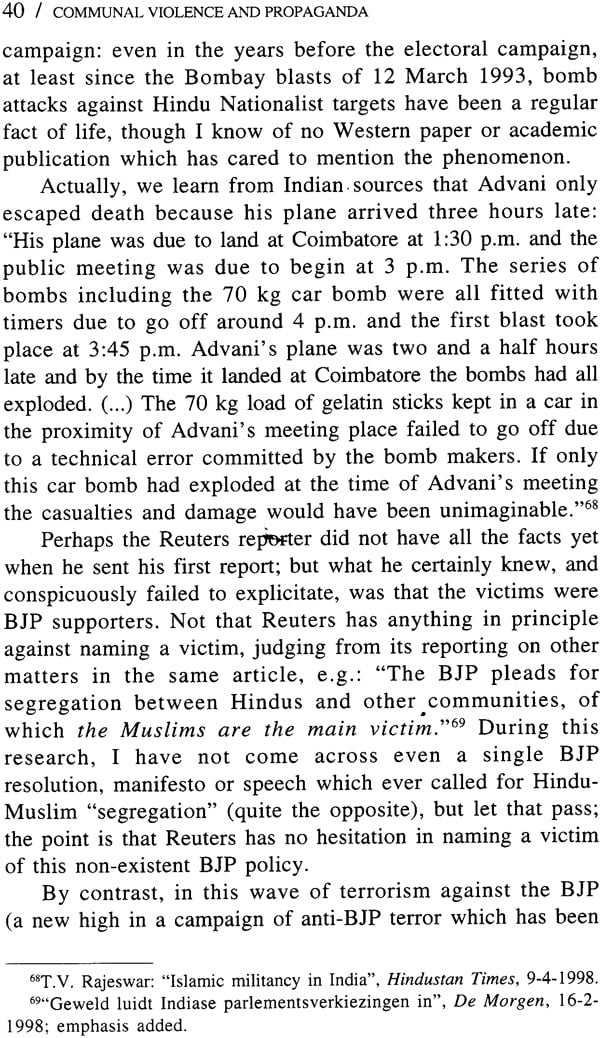 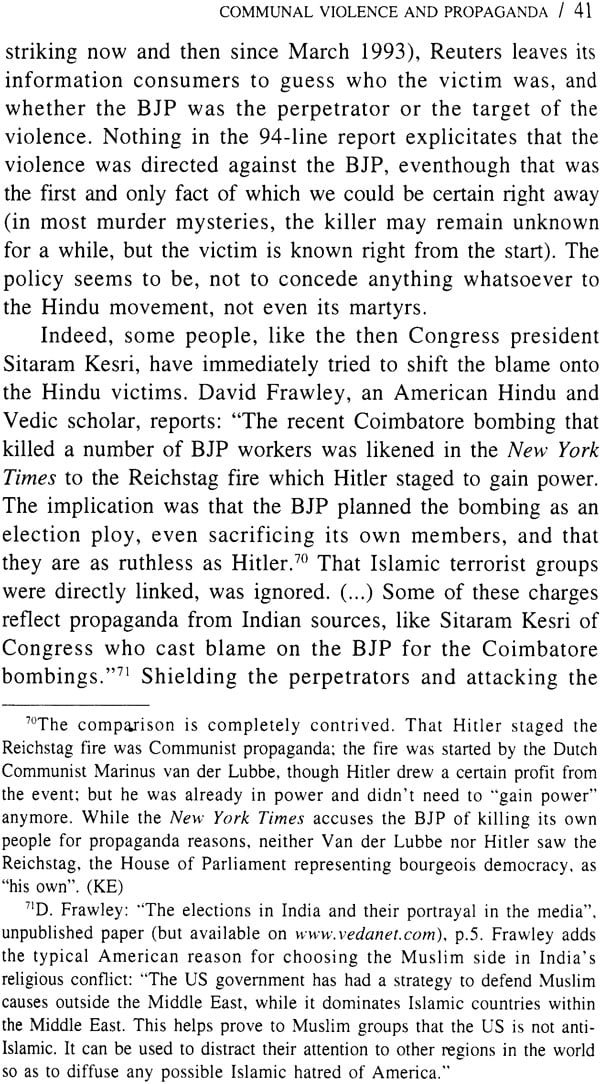 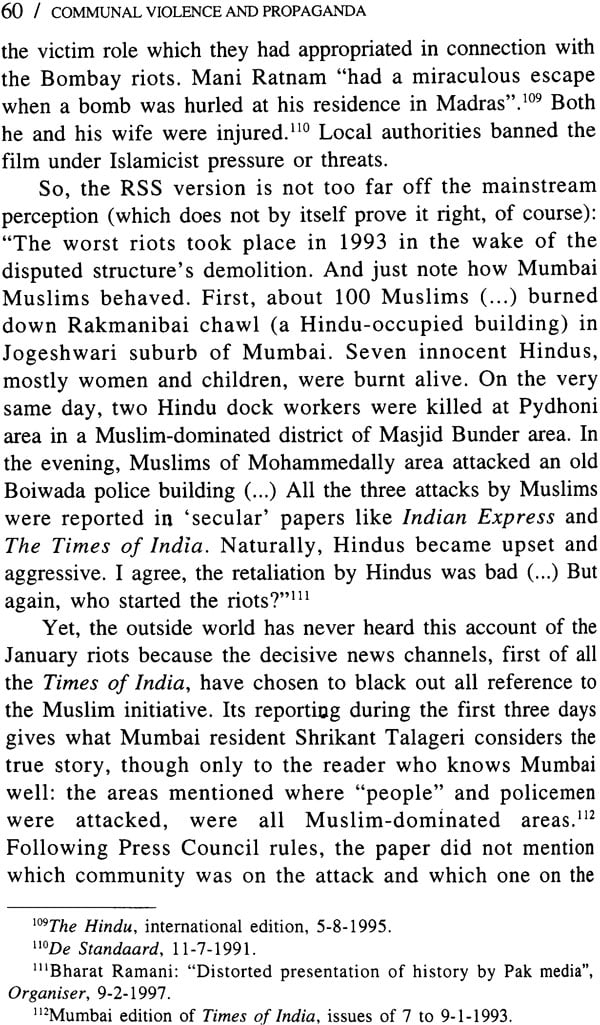 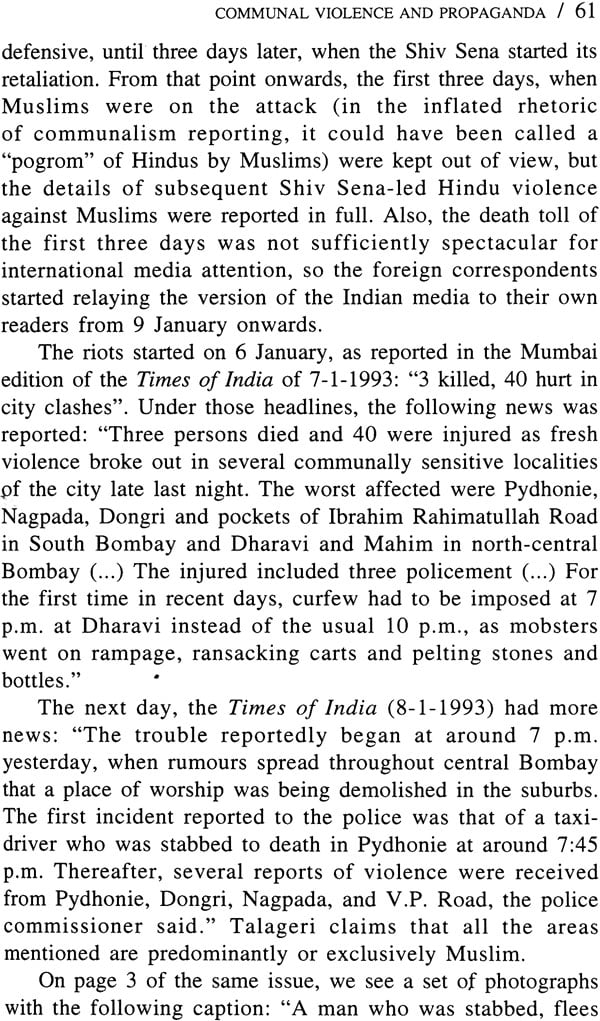 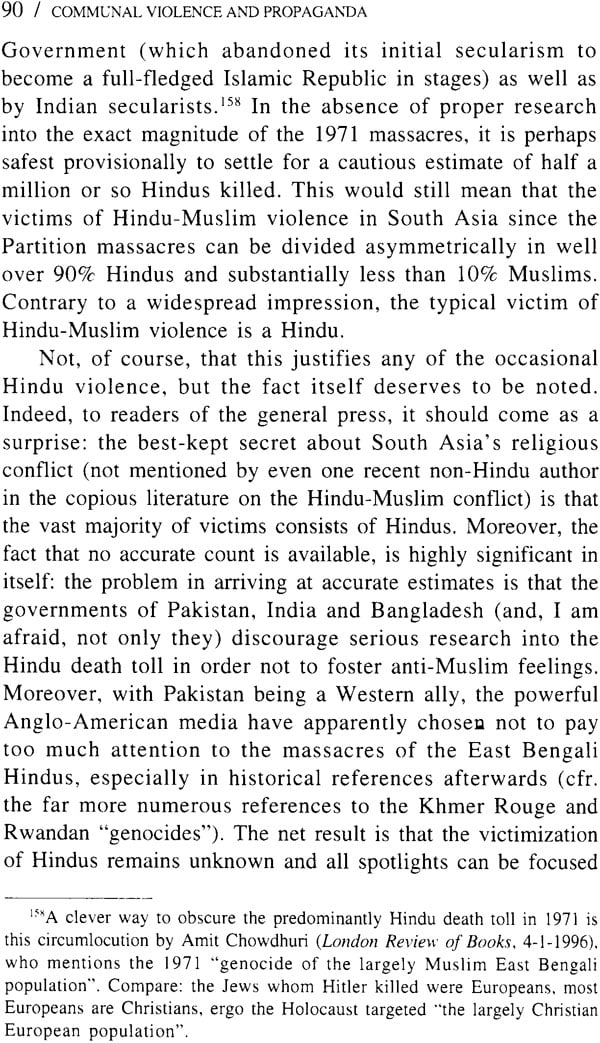 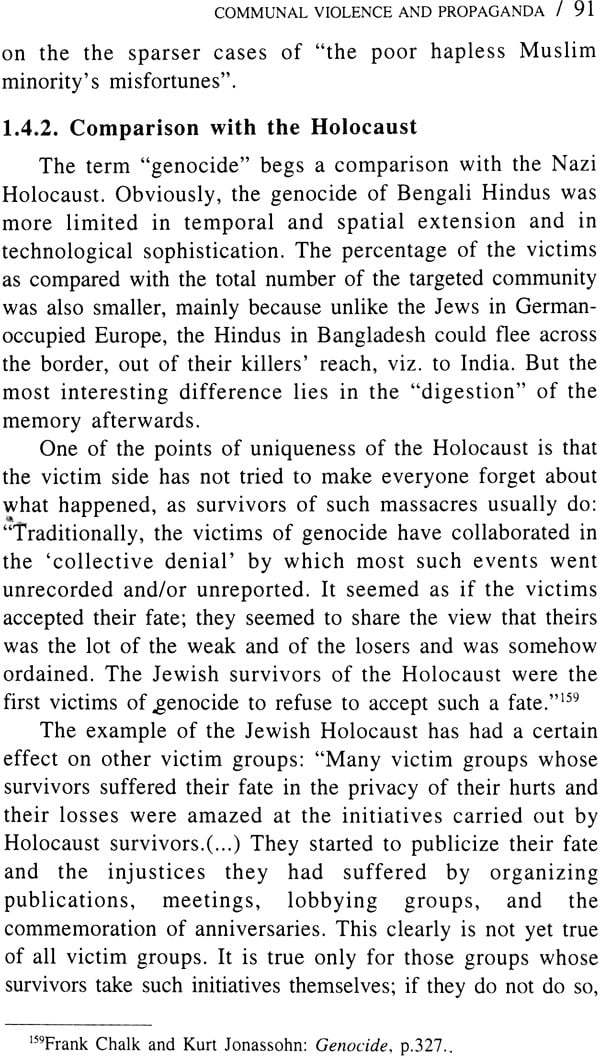