Children Of The Goddess

The women featured in this book Children of the Goddess: Devotion and on Female Priesthood in Bengal live on the frontier between the tribal and the low-caste society in Bengal, and turn to religion in order to forge a new identify Often rejected by their own community' and having lived through long and difficult personal crises some of them turn to religion and to an accultured identity. Some may succeed in becoming female priests, presiding over a Goddess shrine, having given up their femininity by ceasing to menstruate. As Parvati, the central personality of the book, puts it: 'Now I no longer need a child. I am the child of the Goddess', even as she innovates on the boundaries of Hinduism.

The book provides a window to a little-known world where social marginality, subaltern assertion, the the contestation between tribal religion and Hinduism merge to produce a unique perspective on popular Hinduism.

Two Decades Have passed since this book was published in its original (French) form, and quite a bit has been on female possession since then. Some of the points made in the book, such as the importance of possession as an avenue of expression for subaltern women, have been reiterated in later literature. Still, the book should be of interest to English-speaking colleagues.

First, it documents a particular setting, on the boundary between tribal and low-caste life-worlds in Bengal, on which little has been written else-where. Second, perhaps more importantly; most studies of female possession concentrate on the ritual action—while several authors have attempted to situate the possessed women in a sequential life story, this often remains sketchy. Marine Carrin had the advantage of knowing and observing these women over a span of several years, and so came to know their life situation in the quotidian as well as the religious domain. Also, the women were known to each other, often as friends, masters or disciples, so we are told how they viewed each other's personalities and practices, and how they interpreted them. This adds a certain depth which is not often available in similar studies. Finally, as the author has worked for years among the Santal, the book provides more than a glimpse of the acculturation process as Adivasis pick up elements of Hindu religion and culture. This is not simply a matter of cultural borrowing, but, rather, a complex process of negotiating and reframing the reinterpreted schemata these women encounter in their dreams, visions and daily life. The book aims at making us hear subaltern voices in a way that does not dismiss their life worlds and testimonies. Instead, it should make us see subaltern trajectories as fruitful interpretative strategies to forge knowledge and political awareness at the interface of class, gender and ethnicity.

These negotiated experiences forge 'paths of belief', which of course are individual in each case, yet show similarities in their development, clearly following 'rules' of cultural adaptation. We see, here, how Women negotiate the difficult terrain of acculturation in a way different from men, while paths to Hinduism proceed along two axes: that of devotion (bhakti) and that of asceticism and a quest for supernatural yogic powers.

In translating the book, we have kept close to the original, only adding a few references to later literature where this seems particularly pertinent. The content has not been updated or modified. We have tried to keep the rather personal style and emotion, as well as the rhythm, of the French original, while avoiding expressions that sound awkward in English. The translator hopes he has managed to convey the feeling of intimacy with the women described which is so striking in the French text.

Anthropological Studies of India India have usually taken social groups or institutions as their main object. The Indianists, on the other hand, have often reified Hindu concepts: as Inden (1990: 263) puts it, In their more idealist moments, discourses on India have wanted to represent the actions of Indians as expressions of a spirit or mind, of an Indian (Hindu) culture, tradition or mentality differing from a Western one.'

In brief, the idea was that the Indian philosophical systems were capable of expressing, through the values and the potentialities manifested in religious choice, the fundamental qualities by means of which man, in India, knew and experienced the world as well as himself. Centred in cosmology, oriented towards orthopraxy, disturbed by the temptation of renunciation, Hindu man seemed symbolically overdetermined, to an extent where it was difficult to discern, in India, the frameworks of his metaphorical thought. I would rather say that the symbolical dimension extends to most social phenomena while the cognitive dimension, particularly, concerns the framework of knowledge: the categories which designate the qualities of the person and situates the individual in the hierarchical universe. These qualities are, as we know, distributed among the varnas—`colours' or 'ranked categories' which in their turn structure the caste order. Thus Brahmins `priests', would be essentially characterized by sattva, `purity'; the Kshatriya `warriors' by rajas, 'force, courage, dominance' while tamas—'obscure forces, impurity'—would be the lot of the Shudras, the service castes.

But though this codification is applied to men from the castes, they do not really fit the Adivasis, though the upper castes see them as possessing a 'dark' nature linked to the obscure forces (tamas). Moreover, the original myths of the tribes' have taken over this image, and often assign impure origins to the tribal societies. Thus, they are seen as born from the inferior members of primordial man, Purusha. As societies where exchange is marked by power relations, the tribes stand outside the ethics of dharma (sacred law, ethics), the cosmic and social order, and thus seem closer to nature.

This is even more important since this residual conception of the tribal universe has been interiorized by these societies, who imagine that a Hindu god—most often Shiva—has created their world from the sweat of his body. The tribal populations, then, would be born from a bodily secretion of the god. This interiorization of a negative image marked by impurity has, undoubtedly, choked the tribal societies but it has also furnished them with a language in which their difference can be imagined. Thus, we find, among the tribes of the Mundari language family, the idea that a god of Hindu origin, Thakur (Shiva), is the one who invented death.

The Hindus, therefore, set the limits of the tribal universe both as to the beginning of life, at the creation of the world, and at death, since the end of life becomes something invented by neighbours from the castes, and which shatters the serenity of a golden age, forever lost. In other terms, in tribal cosmogony the destruction of a first world created by a tribal god is imputed to a Hindu god that succeeds him. We are far, here, from the Hindu conception of cosmic eras where the Iron Age follows better times, or, put more precisely, the tribal Iron Age is marked by the coming of the Hindus.

These myths where the people of the castes appear are, most certainly, secondary elaborations which do not completely fit the tribal creation myths themselves. But we can read here, the attempt to reflect on the disquieting presence of the Hindu neighbours, and these myths of `Hinduization' definitely suggest that there are no relations between neighbours which do not produce, among the societies concerned, efforts to elaborate an image of the other.

This book deals with relations between groups and individuals caught in a wider context which defines the very process of acculturation. By this term I understand a process of cultural borrowing, between various populations, which produces new forms. In a primitive society, these new forms are the result of contact with a more advanced society. As Dumont notes (1991: 19): 'Ethnologists and anthropologists have described the reactions of the dominated culture to the impact of the domination or influence to which it has been submitted.' In this book, I have tried to evaluate to what extent the subalterns are able to reinterpret the dominant culture. From a sociological point of view, the people we are going to meet— whether they come from the tribal universe or the world of the castes—are mixing and mingling on the margins of a world they try to define, by using religious symbols from one or the other of these worlds. This book, then, tries to describe how the world is perceived from the boundary between tribe and caste, or in other words, how the hierarchy is seen from below. The dividing line between tribe and caste seems to be tenuous here, while questions of rank seem to become secondary in this milieu, impregnated as it is by sectarian influences. Still, this dividing line remains a psychological reality, which sometimes may even become an obsession. The persons described in these pages may belong to lower castes or to tribes but they are not necessarily taking the side of the institutions particular to one or the other of these groups. What characterizes them, on the contrary, at least at the beginning of the process, is a certain degree of individuality. After all, to imagine one's identity implies to engage in an intensive symbolic treatment of the other, against a background—Bengal, which is common to all.

Is this milieu, situated at the margins of Hinduism, where one soon finds oneself transgressing the norms and where various levels of knowledge are frequently questioned, not just a muddle of confusion, where ritual practices impinge on each other? I have tried to perceive how members of the tribes and lower castes try to elaborate an aetiology of misfortune by following the various attempts at founding new therapeutic cults.

Without pretending here to make a study of the region, I would like to sketch this situation of acculturation, which does not, for example, exist in northern Odisha. There, the Santals and other tribes live apart from the Hindu castes, and they have only minimal relations with them. In Bengal, on the other hand, the Santals often live in multi-ethnic villages, in contact with Hindus and Muslims, where each group lives in a separate neighbourhood (tola). The Santals often work for the high castes in the fields, together with workers from other tribes and from the service castes. Also, the castes constitute, from the Santal point of view, a dominant universe, which is situated on the side of political power and government institutions from which they themselves are excluded.

The Kulin Brahmins constitute an important point of reference, not just since they represent the pure pole of the system but also since they are landowners. They do, in fact, give their land over to cultivation by Santals, Mundas and members of the lower castes, since, traditionally, they are not themselves allowed to plough. The Sadgops and the Kurmis are farmers who often own their land and who tend to regard themselves as superior to the Santals—though we have met with the opposite situation in Odisha. In that state, the Kurmis have prospered and are locally considered as zamindars. They have close relations with the Santals, with whom they may eat and may even marry. 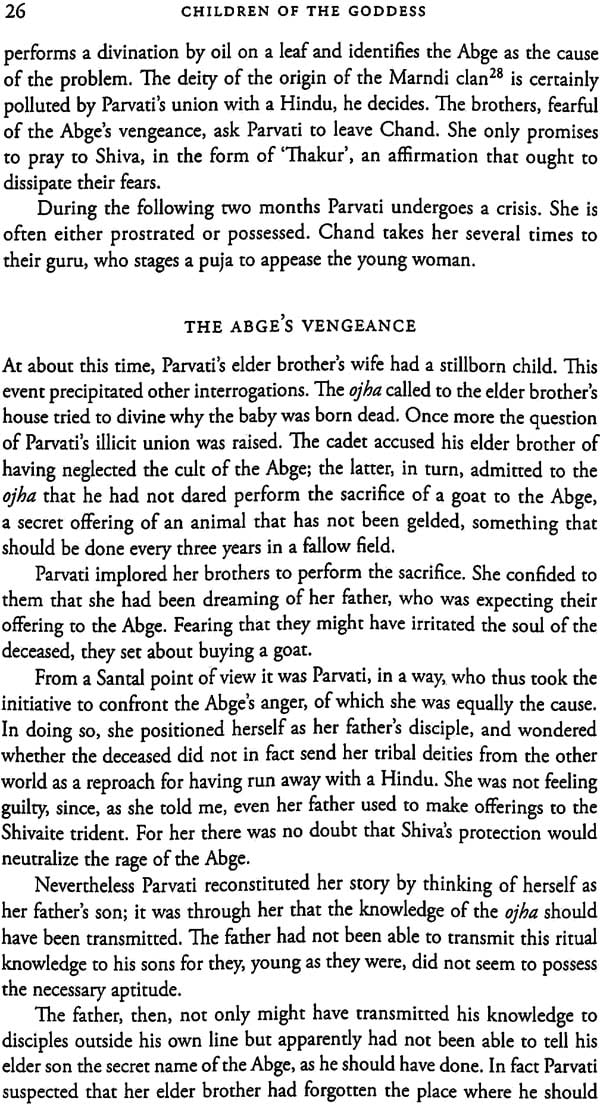 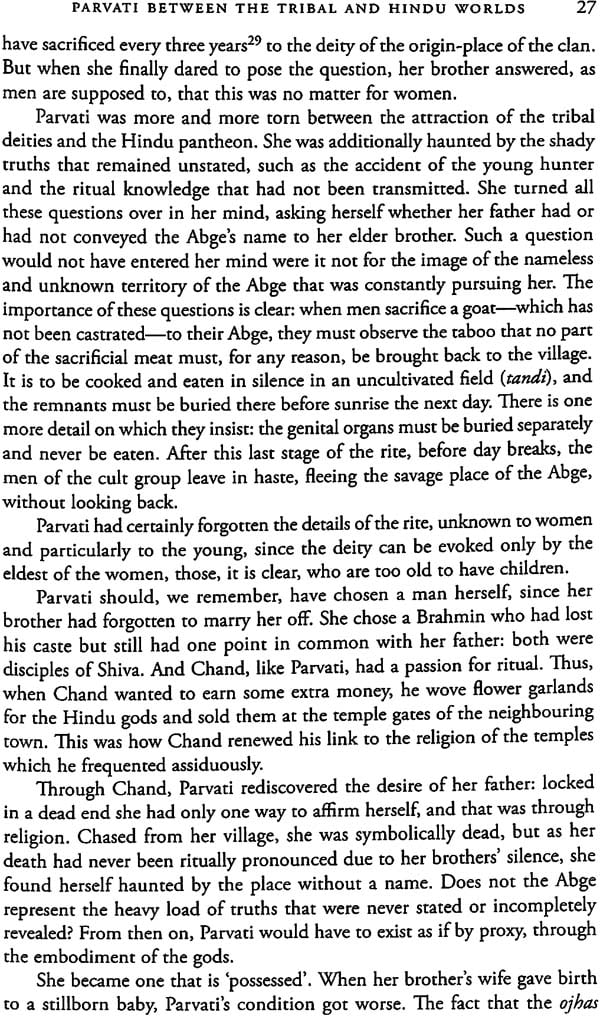 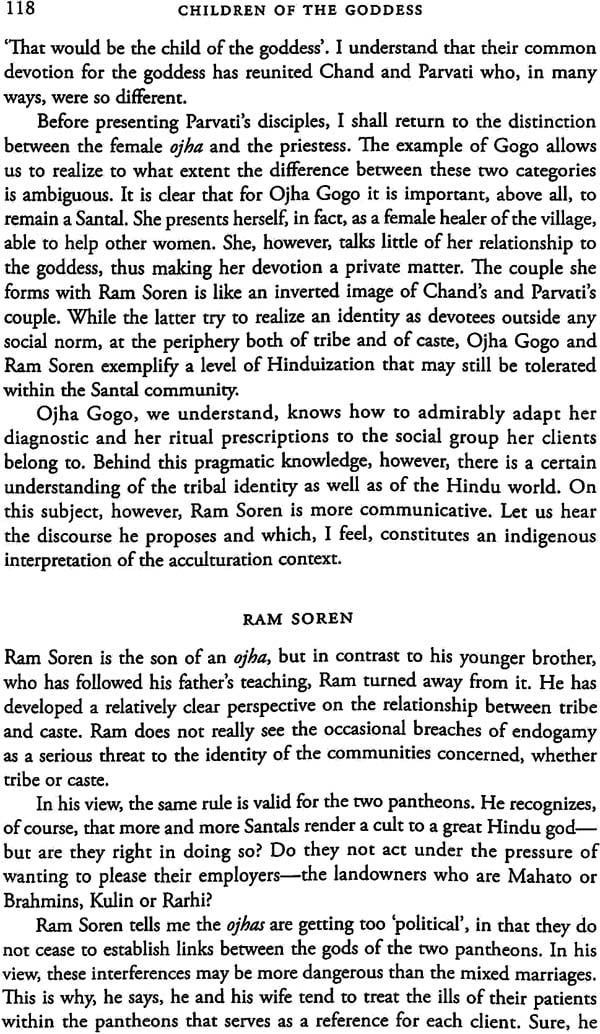 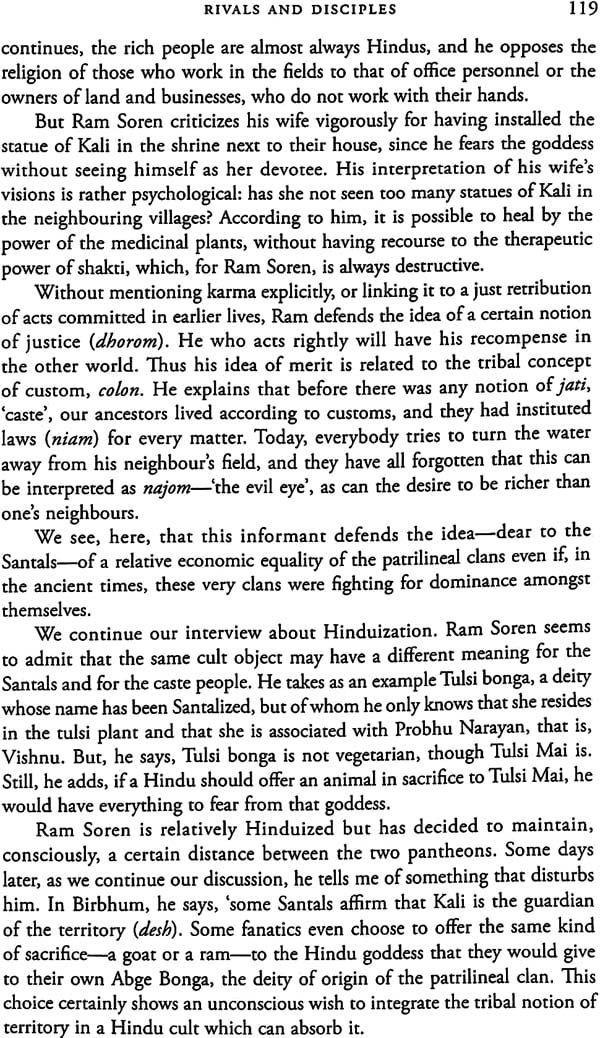 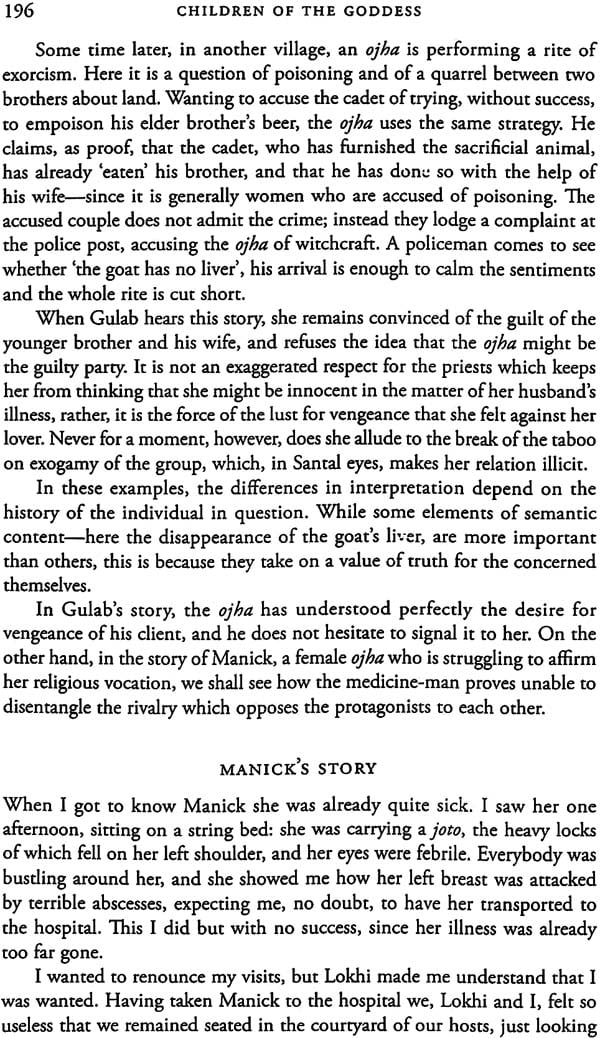 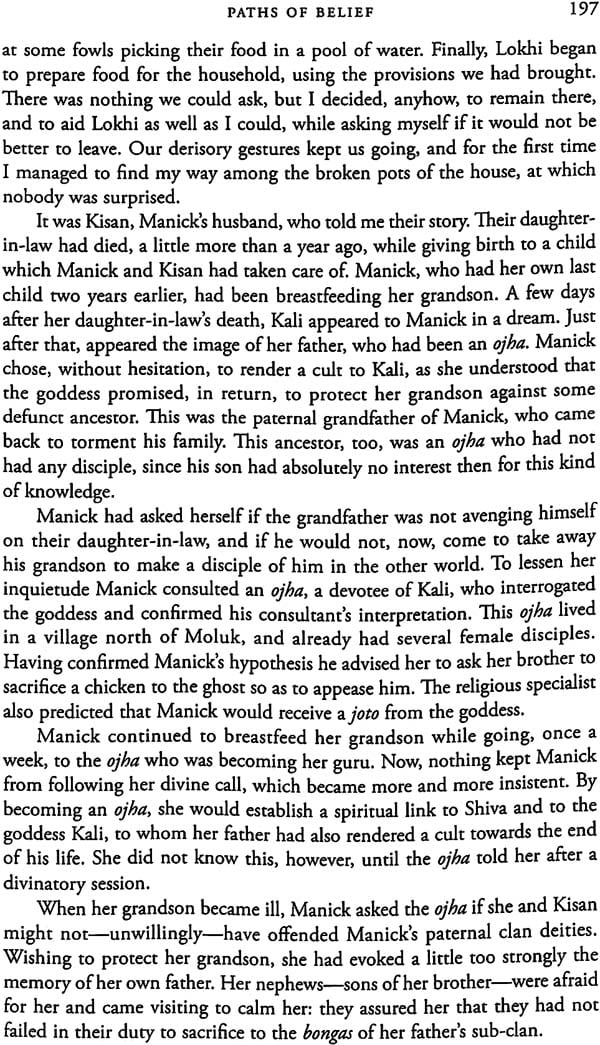 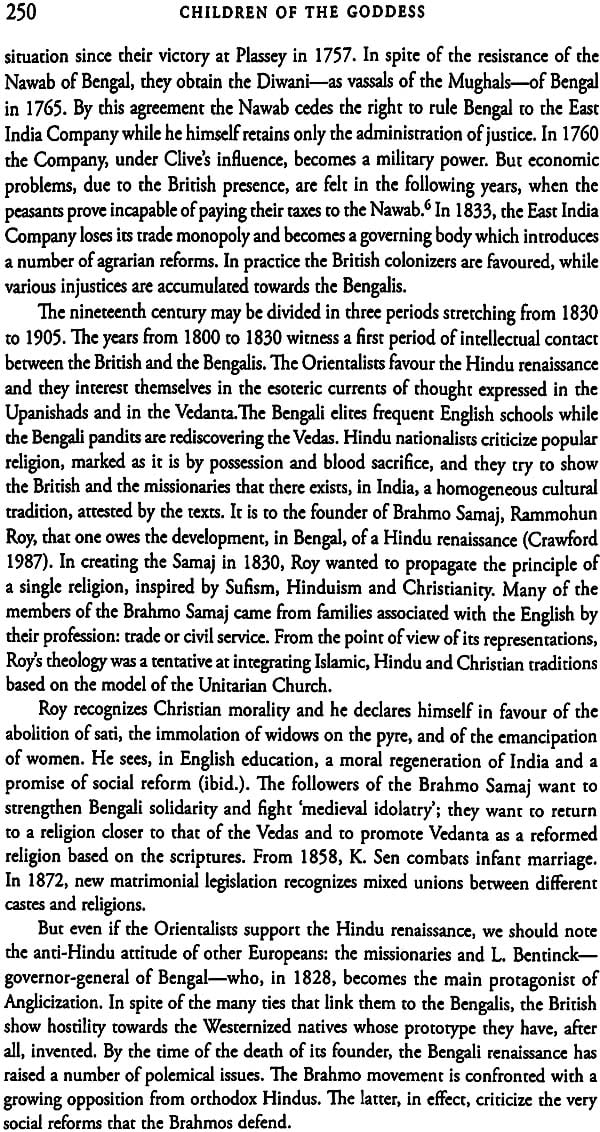 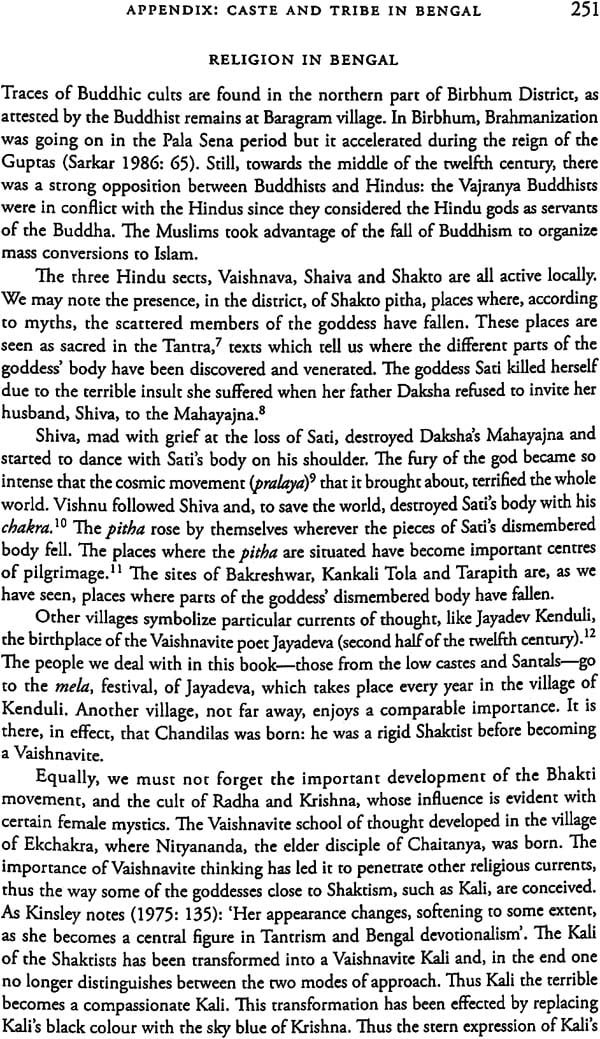 An Anthology of Writings on the Ganga (Goddess and River in History, Culture, and Society)
By Assa Doron
$43
FREE Delivery The Queen of Jhansi
By Mahasweta Devi, Trans By. Mandira and Sagaree Sengupta
$29
FREE Delivery Night of the Gods (Durga Puja and the Legitimation of Power in Rural Bengal)
By Ralfph W. Nicholas
$39
FREE Delivery