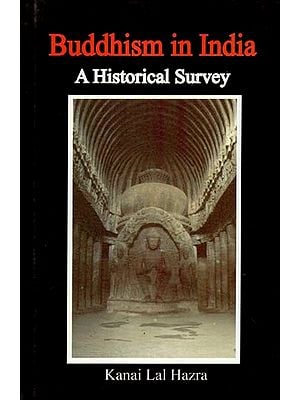 Buddhism in India (A Historical Survey)

FREE Delivery
$38.40
$48
(20% off)
Quantity
Ships in 1-3 days
Notify me when this item is available
About the Book
Dr. Kanai Lal Hazra's new work-about 500 pages of hand written manuscript-starts with Gautama Buddha's life. This book on Buddhism in India is important and interesting. It traces Gautama. Buddha's life, his missionary activities and his important role for the propagation of Buddhism in India. It discusses Buddhist sects in India. Buddhist literature. Buddhist education rules and regulations of the Buddhist Samgha and decline of Buddhism in India. In this age of extremism and violence, the world needs Lord Buddha's religion and his messages. They will help to bring peace and solace in the minds of those who always talk against violence and want to live in peaceful atmosphere and they believe that true Buddhist tradition will never sanction such atrocities. The author has produced an impressive scholastic work. This book provides useful information on various aspects of religion practiced in India. There are detailed accounts of important matters, customs, rituals and festivals that throw flood of light on the progress and development of Buddhism in India. This book elucidates religious terms, beliefs and concepts and tries to establish the true picture of Buddhism in India before the eyes of the readers.
About the Author
Dr. Kanai Lal Hazra as an author of South and South-East Asian history. culture and civilisation, has earned a very good name. He is the most successful writer of South and South East Asian history and Buddhism. He has an incredible ability to create new ideas, imagination and style in his work. He is one of the colossal figures in South and South-East Asia's literary world and is a specialist in South and South-East Asian history. culture and civilisation, and has produced several works on Buddhism. His published works are:

(1) History of Theravada Buddhism in South-East Asia with special reference to Sri Lanka.

(2) The Buddhist Annals and Chronicles of South-East Asia.

(4) Buddhism in India as described by the Chinese Pilgrims.

(5) The Adi Buddha in English.

(6) The Adi Buddha in Bengali.

(7) Constitution of the Buddhist Samgha.

(10) Pali Language and Literature (Vols. I and II)

(11) The Rise and Decline of Buddhism in India.