Brihadaaranyaka - The Great Upanishad (Understanding Brahman and The Ultimate Reality) 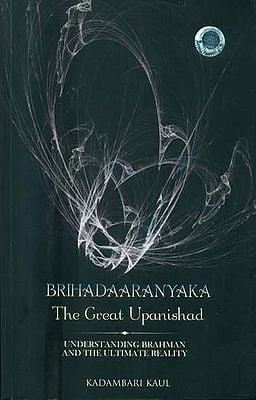 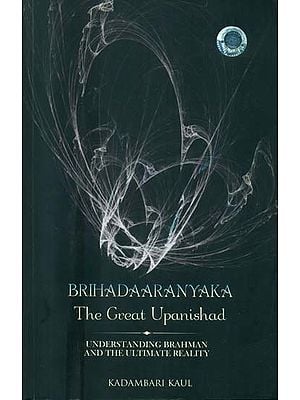 $31.00
Ships in 1-3 days
Notify me when this item is available
Save to Wishlist Send as E-card Share by Email
About The Book

Lead me from the unreal to real, from darkness to light, from death to immortality: these three profound prayers emerge from the distilled soul of eternal India. They are the quintessence of the Brihadaaranyaka (Great Forest Text), that ranks amongst the oldest of the esoteric revelations which constitute the Upanishadic corpus. This pristine work of intuitive wisdom, having at its core the wondrous insight of Yajnavalkya, its pioneer-sage, offers a veritable roadmap, guiding worthy seekers of knowledge on a course of spiritual ascendance and ultimate liberation – with faith, logic and contemplation,as the pilgrims’ wherewithal. Strewn along the path of this great journey of self-discovery, are answers to mankind’s eternal questions on creation, the meaning of existence, karma, transmigration, and finally, attainment of oneness with Brahman-the Ultimate Reality.

Apart from Ethics, Psychology and Metaphysics are other high grounds bridged by the Brihadaaranyaka. Its in-depth examination of the sense organs and objects; of the propensity of the mind to action to act on the ‘ pleasure principles’ ; and its incisive analysis of the states of dream and deep sleep; all constitute powerful testimony to the profound psychological insights of the Upanishadic Hrshi. But it is the enunciation of the Vedantic metaphysics of non-dualism, based on neti neti (negative of all empirical reality), that constitutes the deepest philosophical message of this Great Upanishad.

This volume present an innovative transcreation of the Brihadaaranyaka in simple, free-flowing verse, supported by an eclectic array of elucidations and commentaries gleaned from the works of many master interpreters. It beckons the modern truth-seeker towards the liberating experience of exploring this font of ancient wisdom (prajnaa puraanee),anew.

KADAMBARI KAUL was born into a family of lawyers, scholars, theosophists and educationists. She grew up in an environment where she was exposed to stimulating conversation and literature and the windows of the mind opened to a much wider world It made her seek answer about the true meaning of life; why things are as they are and not how they should be. She began expressing these thoughts in poetry. She learnt early in life that moments of suffering are in truth times of grace: During a crisis, I turned towards the ancient wisdom of the scriptures for guidance and there opened before me a purer and more beautiful dimension of reality.

A Sociology Honours graduate from Elphinstone College, Bombay, her first book, Gautama Buddha – A Note Life, was published in 2003, to be followed by Verses from the Dhammapada, 2007. Both books received positive reviews in the national press, with her latter now included in the liberty collections of the Heidelberg university, Germany, and the National Taiwan University . it was also selected by the reviewers of the Karuna Bodhisattva Order, for originality. In 2010, at the recommendation of the Sahitya Academy, Kadambari’s poem, Peace, was published in Literary Paritantra, an international journal published by the Dayalbagh University, Agra.

Brihadaaranyaka – The Great Upanishad, is the outcome of several years of intensive research and Kadambari elucidates her work saying: The writing of the numerous poems and commentaries for the book has indeed been a kind of meditative exercise. It is my earnest endeavour to show people though this ancient Upanishad, that while living in this world characterized by the suffering of change, it is possible to work toward the attainment of higher degrees of spiritual happiness, and ultimately liberation and immortal life.

STARTING WITH THE OLDEST VEDA, THE Rig Veda, composed between 1500-900 BC and comprising 1,028 hymns in the praise of the forces of nature, personifies as gods, we find outpourings of the human soul about the many wonders of nature. Then, as we move on to the three other Vedas- the Yajur Veda containing sarcrificial formulae to be followed by the priests; the Sama Veda, a collection of select hymns of the Rig Veda rearranged for liturgical purposes; and the magical spells and incantations of the Atharva Veda – all belonging to a later period, we move towards a broad understanding that the religion of the Vedas was more concerned with the material well being and worldly happiness of the individual rather than his spiritual development. However, to put things into perspectiv , in the myriad hymns of the Rig Veda we do find stirrings of incipient philosophical thought that reached fruition in the age of the Upanishads.

Then, as we progress from the hymns and sacrificial formulae of the Vedas to the Brahmanas, texts that deal with the significance of the sacrificies, which are discussed in greater detail in the Araranyakas or ‘forest books’, we notice a gradual evolution in the religious consciousness of the early Aryans. It is, however, only when the Aaranyakas give way imperceptibly to the philosophy of the Upanishads that we notice a definite change in the direction of religious thought of the ancient Indo-Aryans. In this massive body of Vedic literature. We then see the emphasis shifting from sacrifice to the goods above, an ‘inner sarifice’ to the Self, that enjoins the giving up of all selfish desires and practice of meditation for the attainment of abiding happiness in this life and hereafter, ultimately gaining moksha or emancipation from the endless cycle or rebirths.

Thus the rig Veda , along with the Sama, Yajur and Atharva Vedas, the Brahmanas, Aaranyakas and the Upanishads together form the Vedic literature of this country, regarded as the Shruti or ‘divine revelations’, as experienced by the ancient Vedic seers in their inspired moments.

Interestingly, even though the Rig Veda represents the earliest phase in the religious consciousness of the Indo-Aryans, one cannot help but notice a spirit of enquiry working in the minds of its authors regarding the origin of the univerce. In fact, the monism of the Upanishads can be traced to the famous hymn of creation in this sacred text, in which the gods and the universe were believed to have emerged from the attribute-less One, the tad ekam or the First Principles, that ‘breathed breathless’ before the drawn of creation.

However, as mentioned, the Rig-Vedic, predominantly male, pantheon of the early Aryans, comprised several gods identified with natural phenomena. They include Indra, the war lord, who was also the weather god; Agni, the god of fire; surya, the sun god; Dyaus, the sky; Soma, the Moon; and Vayu, the god of winds, to name a few. Also included in the pantheon were goddesses such as Usas, the dawn; Aditi, mother of the gods; and Ratri, the night spirit. But they were not deemed to be as important as their male gods. Special mention must be made of Varuna, the guardian of rta or the cosmic order that regulated the course of movement of the plantets and the cycle of seasons. Varuna was regarded by some as being the creator of rta.

Depending on the personal beliefs, needs and circumstances of the worshipper, one of these gods was elevated to the position of Supreme Lord, while the other ‘lesser’ gods were regarded as manifestations of his various powers. Thus, with a number of gods being elevated to the supreme position, or at times being invoked in combination for certain worldly boons, there existed at the time, a religious practice knows as henotheism, a concept that combined the characteristics of both monotheism and polytheism. In henotheism, the existence and importance of other deities was recognized, while a particular deity was viewed as the supreme Lord. At the same, the Vedic Indians longed to know that first principle, the ultimate source, from which gods and men, in fact this manifold world of creation, came into existence. Thus, in the later section of the Rig Veda, towards the end of this period, they assigned the role of the creator god to Prajapati, the Lord of creatures, thereby showing a tendency towards monotheism. This tendency is further supported by belief in the universe as an integral whole and the concept of rta, or the order of the cosmos. Thus, we find in the Rig Veda an interesting variety of religious beliefs and the very beginnings of philosophical thought in minds as yet rather unsophisticated, which, thought at times speculative and obscure in nature, later developed into the philosophical doctrines of the Upanishads.

However, it must be remembered that at the centre of the Vedicult was the sacrifice performed by the Brahmin to appease the various gods, according to the formulae contained in the scriptures. The significance of the sacrifice is brought out in the ‘Hymn of the Primeval Man’ of the Rig Veda, in which the primeval man, or Purusha, was sacrificed by his sons the lesser gods, to himself, and through this great cosmic sacrifice the world was born anew. Thus, the performance of the sacrifice was considered important in sustaining the univerce, apart from achieving certain worldly ends such as health, prosperity, long life and sons. However, the emphasis on the significance of the sacrifice as a means to maintaining the cosmic order was a development of a later Vedic period, when the sacrifice, in contrast to the one in the early Rig Vedic period, had ceased to be viewed as a mechanical process that was performed for the gratification of the gods.

Agni or the god of fire was the chief god of the Brahmin, while Indra the war lord was the chief god of the Kshatriyas. In fact, it was Agni who carried the sacrifice to the heavens and bought down the various divinities to the sacrificial field. As the Aryans advanced eastwards from their original home in North West India, along the northern edge of the Ganges basin, legend has it that Agni purified the lands. Making them habitable for the Aryan settlers. It was believed that the large forested areas burnt down and cleared by the fire god Agni. Indeed, Agni, who dwelt in the earthly fire, in the lightning streaking across heaven, and in people’s homes, was perhaps the most important god of the Aryans. Thus, it was in the eastern areas that lay between the river Yamuna and the borders of Bengal,’purified’ by Agni during the later Vedic age, where the mystical doctrines of the Upanishads were propounded. 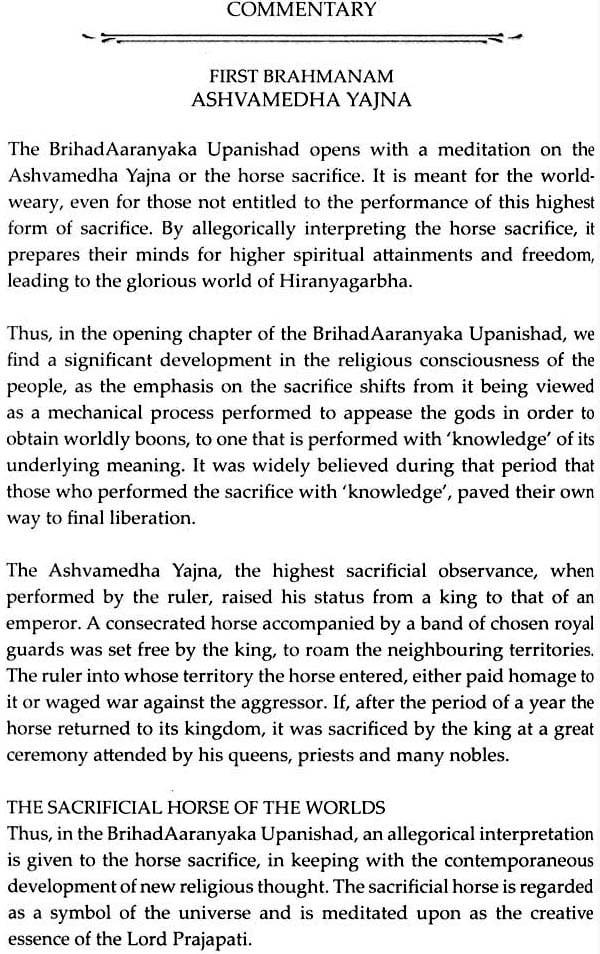 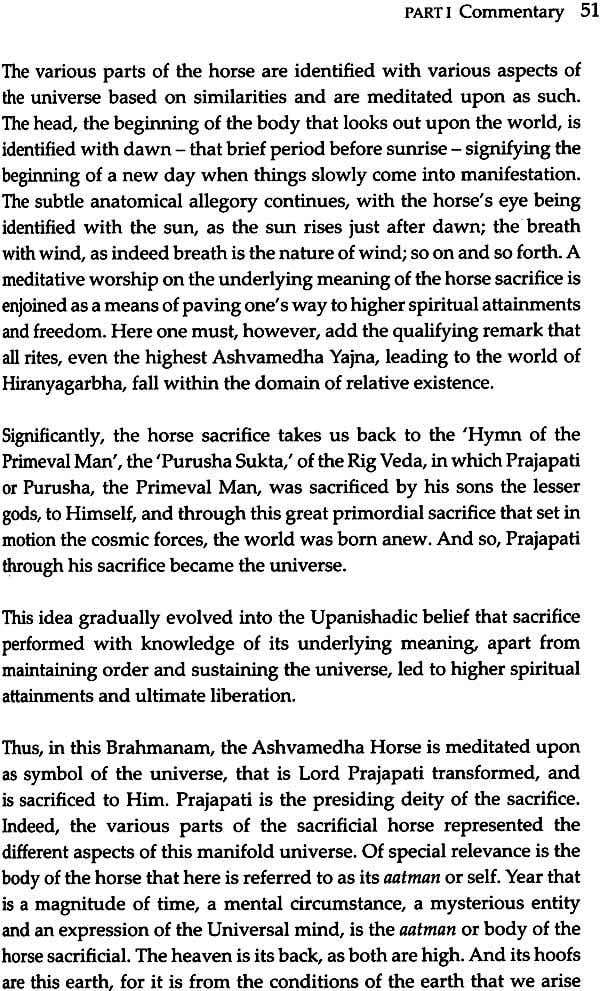 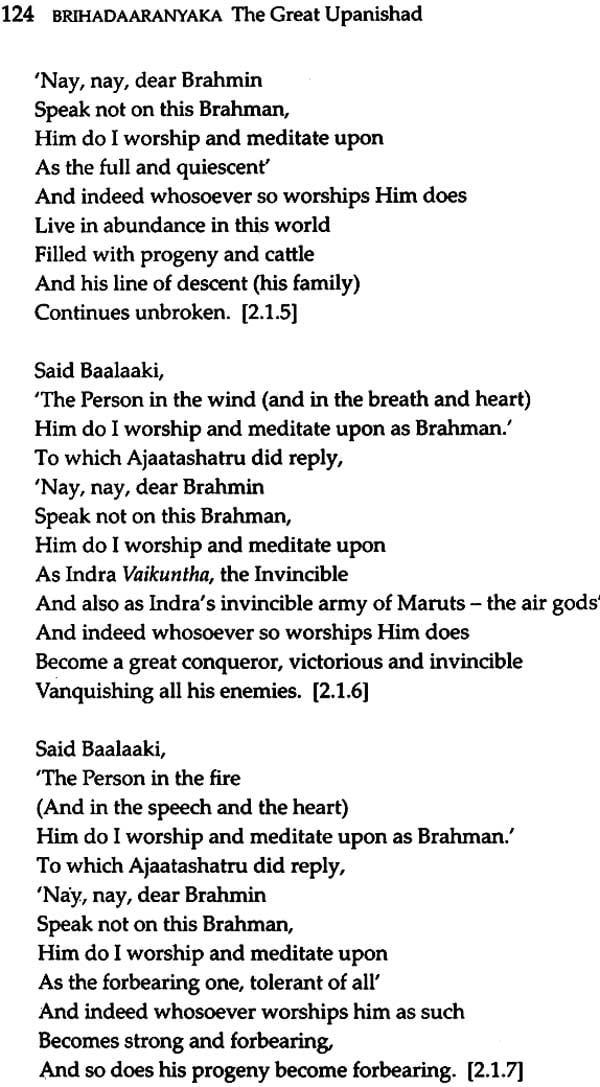 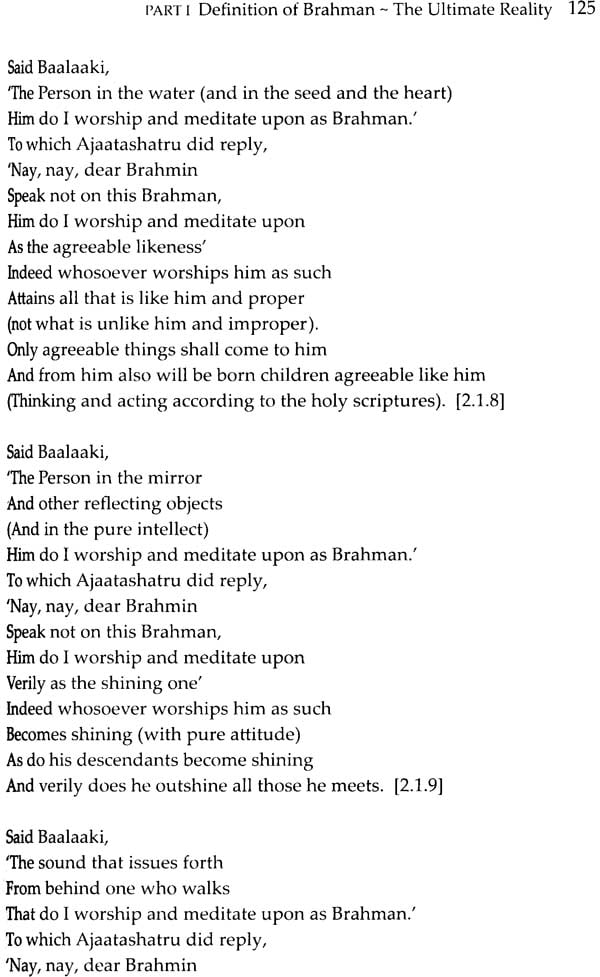 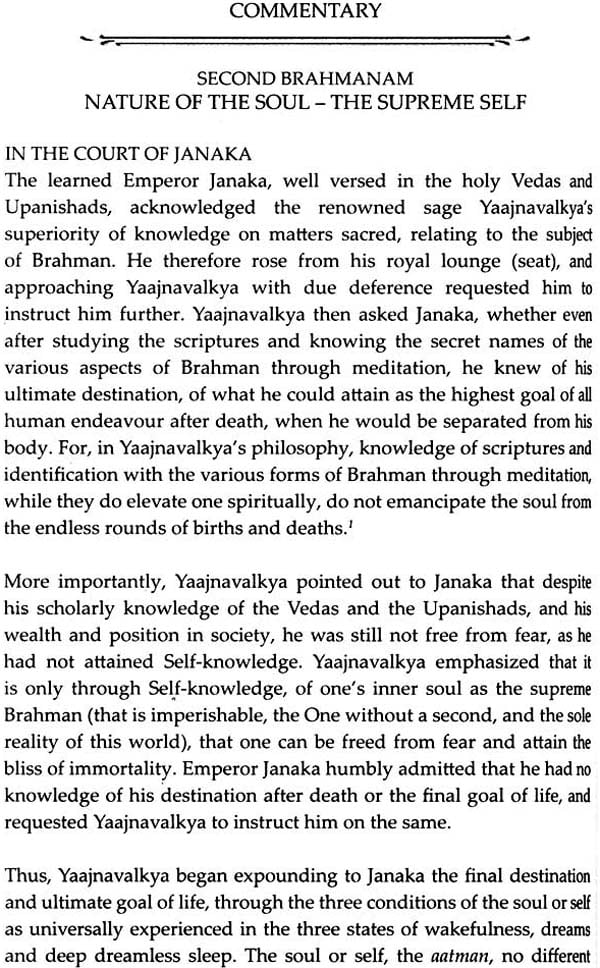 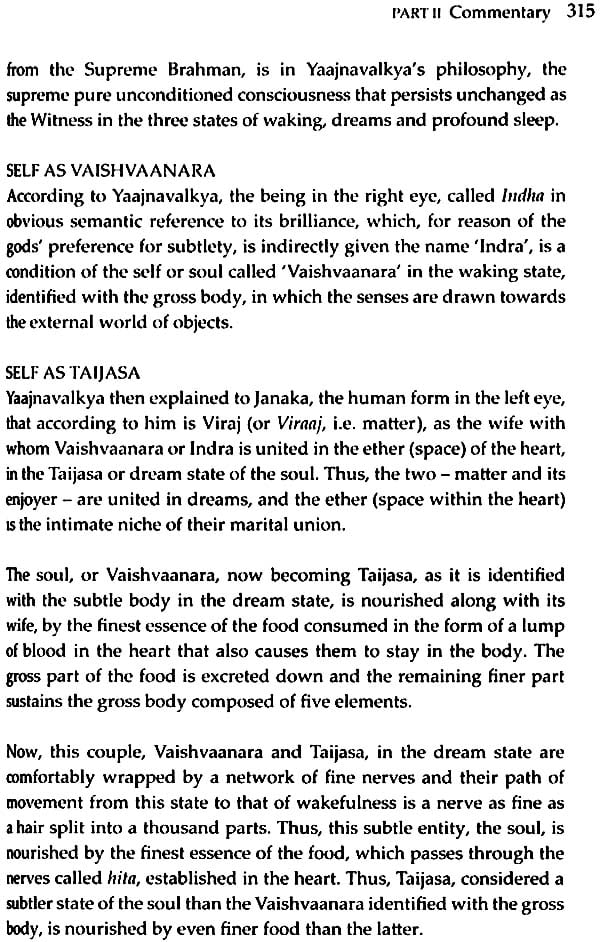 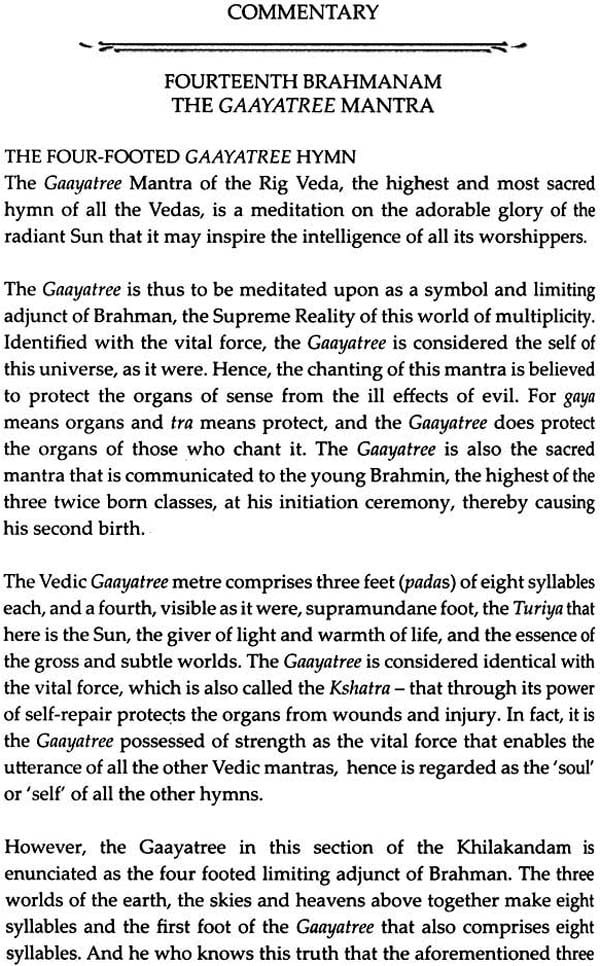 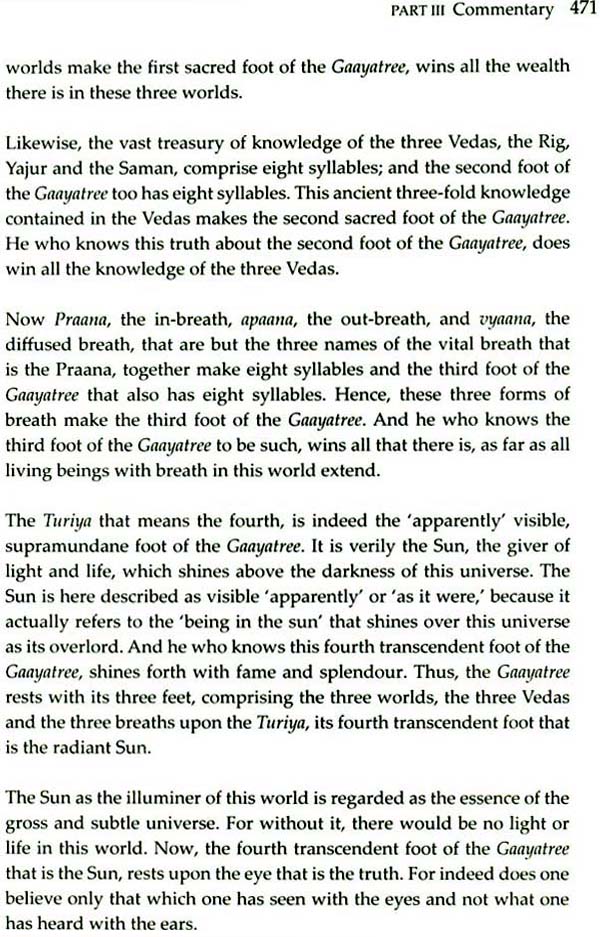 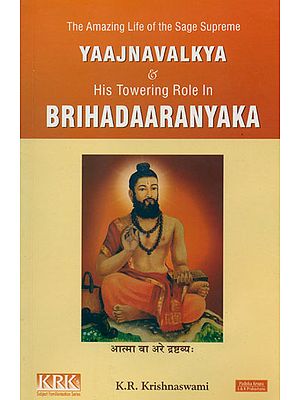 The Amazing Life of the Sage Supreme Yajnavalkya and His Towering Role in Brihadaaranyaka
By K. R. Krishnaswami
$16.00 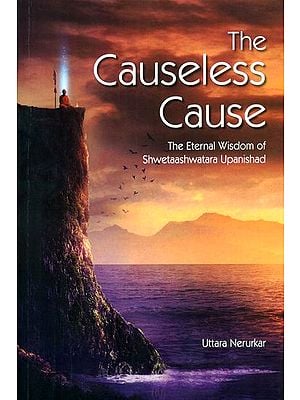 The Causeless Cause (The Eternal Wisdom of Shwetaashwatara Upanishad)
By Uttara Nerurkar
$21.00