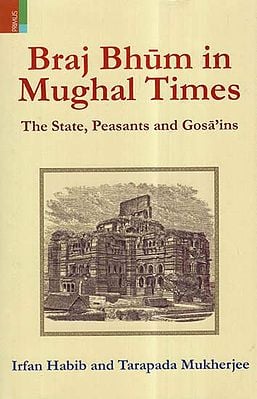 Braj Bhum in Mughal Times- The State, Peasants and Gosa’ins

Braj bhum in Mughal times: the state, peasants and gosa’ins represents a unique effort at presenting the conditions of life of the ordinary people in a small region of the Mughal empire from about the accession of Akbar (1556) to the collapse of Mughal power (1739). The study brings out how the Mughal administration functioned on the ground, how peasant communities were organized and religious men conducted their worldly affairs. We are even able to meet some lowly men and women as distinct individuals.

Some interesting facts also emerge: the early dates from which Akbar’s Grants to temples began; the extensive survey of temples in Brad heartland that Akbar ordered in 1598; and, late in aurangzeb’s reign (1704), The official Levy of re. 1 per annum on each village in the Braj region to be collected by the Chaitanya- gosa’ins. Readers to whom ordinary people matter should find much of interest in the reconstructed history of three villages separately studied (Vrindavan, radhakund and Rajpur). at the end, there are biographies of domains of the Chaitanya sect mainly containing details of their worldly concerns.

The book uses a mass of privately preserved documents in Persian and Brad, along with historical texts, travel accounts, etc. (See introduction). a bibliography and comprehensive index will be found at the end of the book.

Tarapada Mukherjee (1928-90). Educated, Calcutta and Vishva Bharati, he obtained his doctoral degree (1959) from the School of Oriental and African Studies (SOAS), London, with a thesis on Brajbuli poetry. Having already published an anthology of Bengali poetry (1954), he undertook (with T.W. Clerk) a translation of the novel Pathar Panchli (1969). In 1971, came his study of Krishna Kirtan, and later, with the collaboration of Sukumar Sen, a critical edition of Krishnadas Kaviraj’s Chaitanyacharitamrita (1988). In the meantime he organized the project of tracking down and photographing all old documents in possession of temples and individuals in the Braj region. Based on this material, he published four articles (one jointly with J.C. Wright and the rest with Irfan Habib).

An account of how this volume came to be planned and then written, largely on the basis of material collected by the co-author, the late Dr Tarapada Mukherjee, is set out in some detail in the Introduction, and so on it nothing need be said here. What needs to be recorded is my sense of gratitude for the very kind approval given to the enterprise by Dr (Mrs) Emma Mukherjee, herself a distinguished physician, when, after her husband's passing away, I explained the project to her in 1991. Unfortunately, she too did not live to see the completion of work on this volume. I am most grateful to the two daughters of Dr Tarapada Mukherjee, Mrs Mimi Ray and Mrs Rimi Mukherjee Mehra, for having so readily agreed to the publication of this joint work, when I approached them for their consent.

I recall with much gratitude the kindness of Shri Shrivats Goswami, a leading divine of Vrindavan, who personally brought a heavy load of photographs of the documents sent to me from London by Dr Tarapada Mukherjee, that constitute the basic material for this book.

In preparing the final text of the volume, I have been greatly aided by the suggestions and comments of Professor Sayera I. Habib who has gone through all the chapters of this volume.

Faiz Habib, a skilled cartographer, has drawn the four maps. Chapter 2 originated as a paper co-authored by him.

Professor Shireen Moosvi has organized the entire processing of the text under the auspices of the Aligarh Historians Society (AHS), of which she is the Secretary. I am most grateful for the many suggestions that she has made while going through the processed text.

Professor S.A. Nadeem Rezavi, Chairman, Department of History, has organized the scanning of the entire set of documents, photographs of which had been supplied to me by Dr Mukherjee. I am particularly satisfied that they are now preserved and available for use by bona-fide researchers.

The text of the volume has been successively processed over the years under the auspices of the AHS, by Mr Muneeruddin Khan, Ms Nazma Khan, Mr Zeeshan Khan and Mr Saif Ali Khan, to all of whom sincere thanks are due.

I am very happy that Mr B.N. Varma, an old friend, agreed on behalf of Primus Books to publish this book. Mr Benedict Joseph O'Hagan has won my gratitude not only by his diligent copy-editing but also for giving way whenever I preferred my English to King's English. Now that the book is in the reader's hands, it would be too bold for me to claim that it anywhere approaches 'definitive history' which Dr Tarapada Mukherjee once hoped the rich information contained in the documents he had collected could lead to. But if the reader is able to find some information of a kind not usually to be encountered in conventional histories, I for one would be satisfied.

It was largely owing to the vision and effort of the co-author of the present volume, the late Dr Tarapada Mukherjee (1928-90), that an exceptionally large amount of very valuable documentary material became available to the historians of Mughal India. Tarapada Mukherjee's interest in Bengali literature and its history made him choose Brajbuli poetry of the Bengali Vaishnavites for the subject of his doctoral research; and his interests widened from what the Vaishnavites wrote in Bengali and Sanskrit to the authors themselves, notably the gosvamis (usually spelt goswamis) of the Chaitanya sect at Vrindavan. This ultimately led to a dedicated effort on his part to collect all the material that he could track down which might illumine for us the lives and activities of these Bengali divines in a region so distant from Bengal.

The Documents So in 1978 Dr Mukherjee, a member of the faculty of the School of Oriental and African Studies (SOAS), University of London, organized, under auspices of the SOAS and with the support of the Vrindavan Research Institute, a campaign to photograph all the old documents that could be found in possession of the Chaitanya Goswarnis (Gosa' ins’ in Braj) and their temples. The archives of the Govind-dev temples of Vrindavan and Jaipur and the Radhakund temple were photographed, as were the holdings of the Madan Mohan and Radha Damodar temples deposited in the Vrindavan Research Institute (VRI), Vrindavan. Since many documents had been submitted to courts in the course of litigation, Dr Mukherjee's team obtained permission to photograph documents kept in case files stored in the strong room of the Mathura District court. (Unfortunately documents so retrieved are not identified as such in the photographs given to me). An important addition to the collection came in the late 1980s when the Institute of Vaishnav Studies, USA, provided him with a thick file of xeroxed copies of documents obtained from the Gopinath temples of Vrindavan and Jaipur.

It was my good fortune to receive a letter from Dr Tarapada Mukherjee, dated 20 October 1986, in which he asked if we could collaborate on the Persian portion of the collection. So commenced our joint effort. I received, through his kindness and the aid of Shri Shrivats Goswami of Vrindavan, photographs and xerox copies of a large number of Persian (including bilingual) documents; and Professor J.C. Wright, Dr Mukherjee's collaborator in London, very kindly furnished me with his decipherments and translations of over thirty Braj documents.

Dr Mukherjee and I published three joint papers in 1987, 1988, and 1989-90, dealing with Mughal imperial grants to temples and priests, from the time of Akbar to that of Shahjahan, and with the evidence that the Vrindavan documents yielded about the nature of land rights in the area during the reign of Akbar. These papers form Chapters 3, 4 and 6 of this volume.

Struck by cancer which he faced with incredible bravery, Tarapada Mukherjee passed away on 7 July 1990. His death left me alone to continue with the analysis of the material I had been provided with. There is no doubt that I have taken far too long a time (nearly three decades) to come out with a volume that can claim to fulfil at least part of Tarapada Mukherjee's ambitious plan. My plea in my own defence is that for this work to be completed, I needed to decipher, transcribe, arrange, understand, and analyse a very large amount of material, mostly in the Persian cursive script; and further that with Dr Mukherjee passing away, I no longer had the advantage of his aid and guidance in the pursuit of our joint enterprise.

In a letter dated 18 January 1989, Dr Tarapada Mukherjee informed me that photographs of all the documents in temple collections as well as the Mathura Court's strong room were deposited in the VRI as well as the library of SOAS, London.

A reader is bound to expect that there would be full and adequate indications of sources in the volume that has come out of this effort. References to printed texts and holdings of the National Archives have posed no problems. But many of the photographs of documents Dr Mukherjee sent me give no indication of the collection that they came from. Often, when the collection is indicated, no number is given to locate the document within that collection. Some photographs bear numbers; others do not, and sometimes the numbers marked on the obverse and reverse vary. It seemed to me that in such a situation the best way of securing wider academic access to this collection was to transcribe the documents on separate sheets and arrange them chronologically, so that the text of a document can be traced simply by reference to its date. This work has been completed, and from the photographs and xeroxed copies received by me from Dr Tarapada Mukherjee all documents assignable to the period down to about 1760 have been transcribed and arranged in rough chronological order. The photographs and xerox copies collected by Dr Tarapada Mukherjee have now been scanned at the Department of History, Aligarh Muslim University, the collection being appropriately named after him. Hopefully, my transcripts will also be scanned or xeroxed and, like the photographs of the originals, be made available to researchers. In such expectation, the Vrindavan documents are cited by their transcript numbers in Chapter 5, which happens to be the piece written last for this volume. 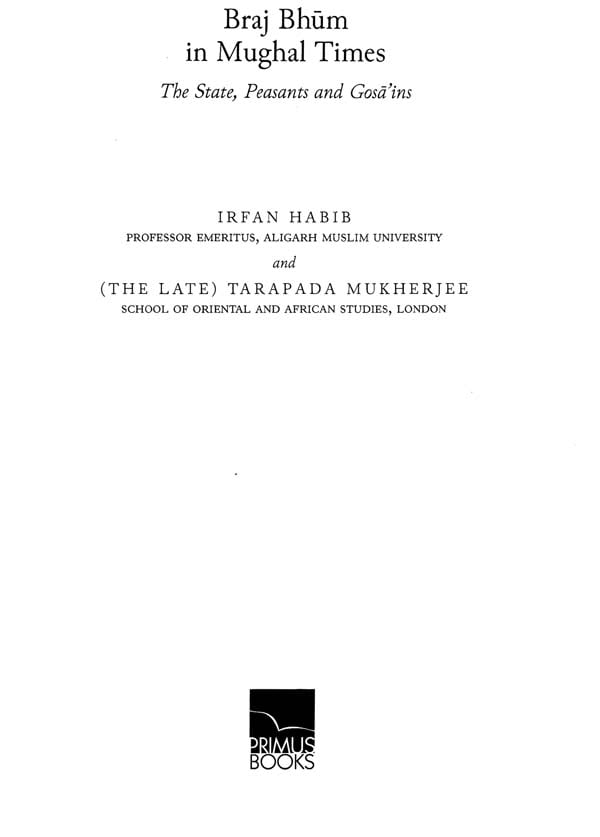 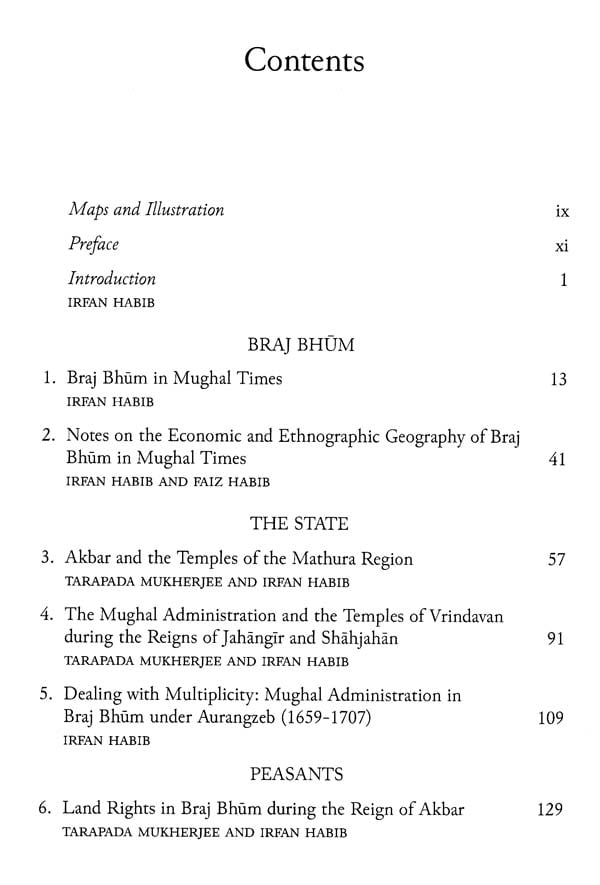 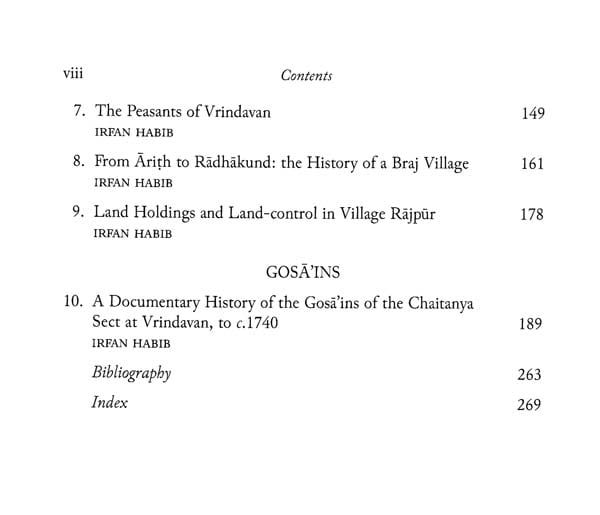 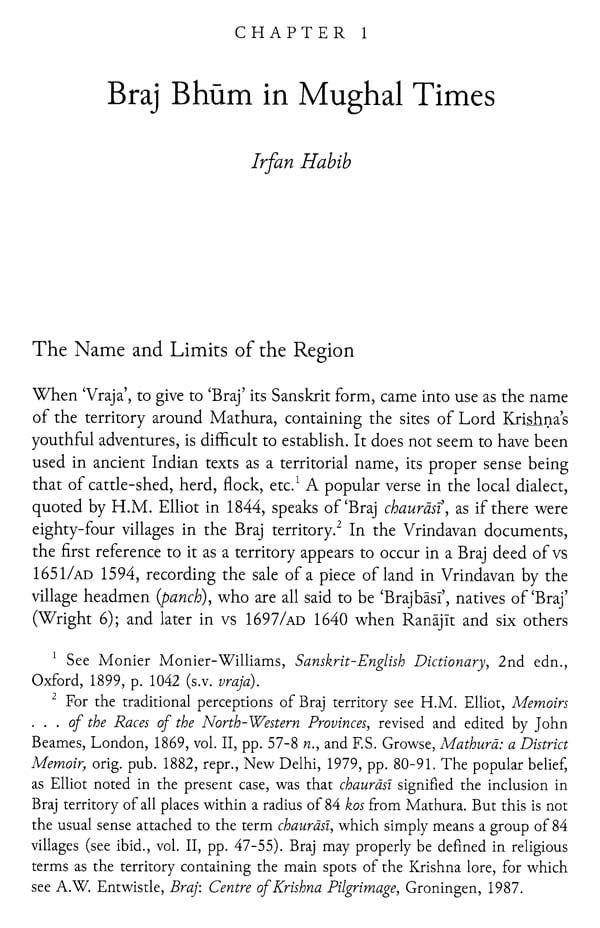 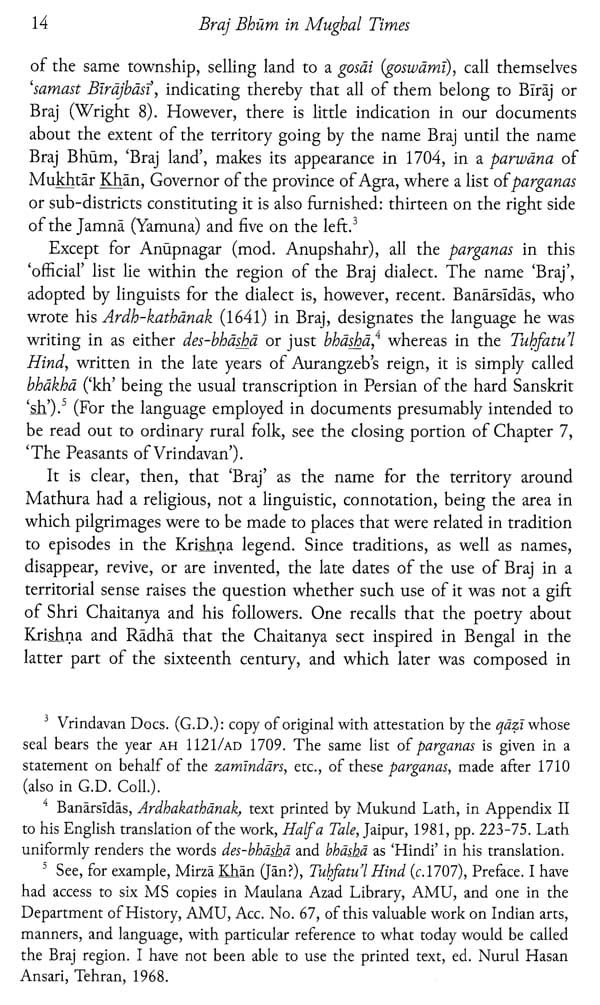 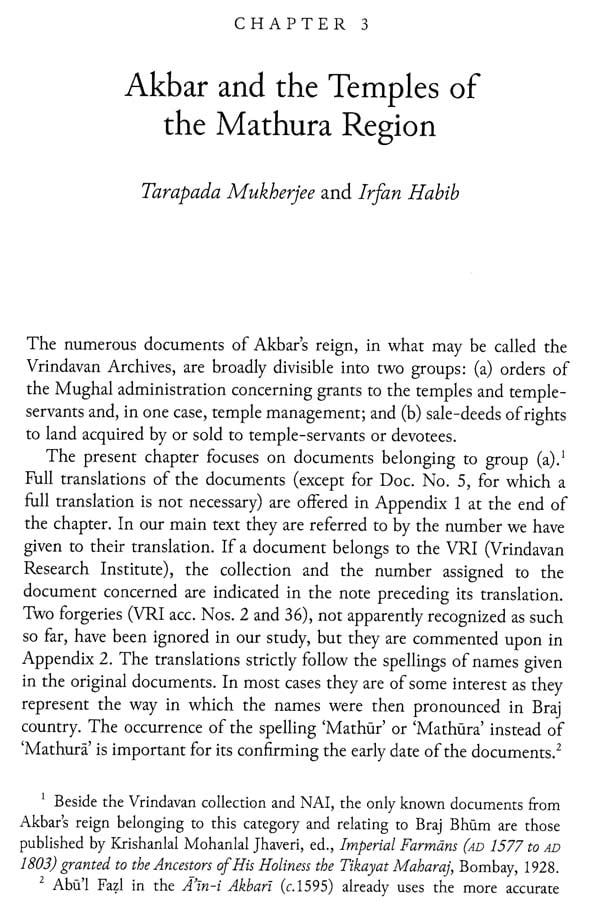 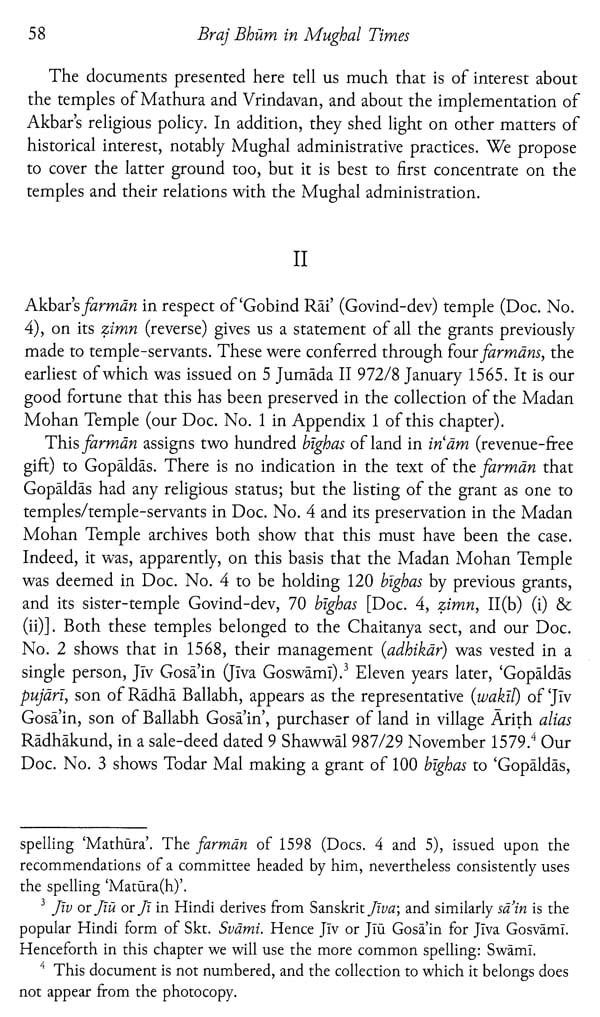 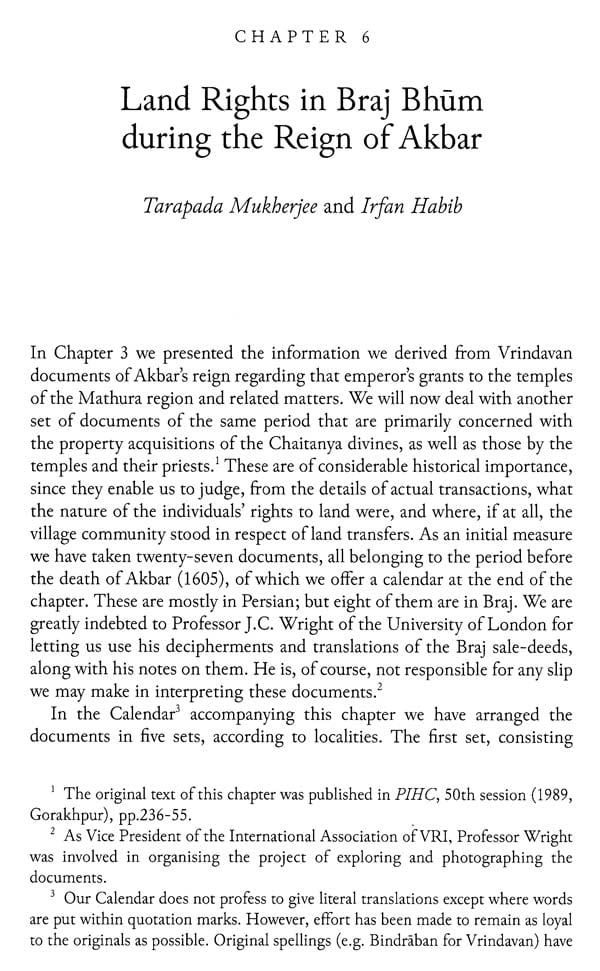 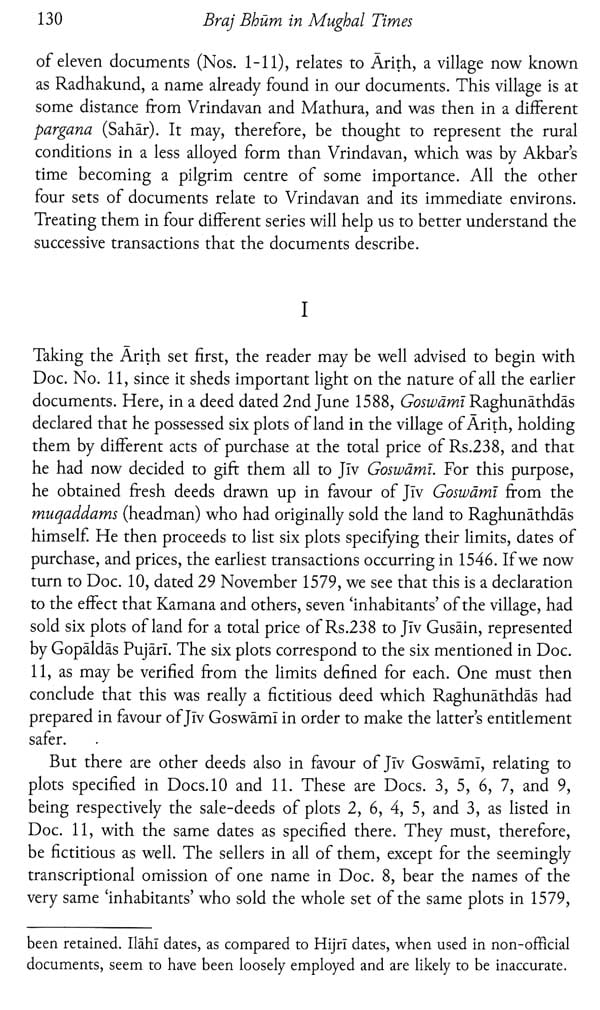 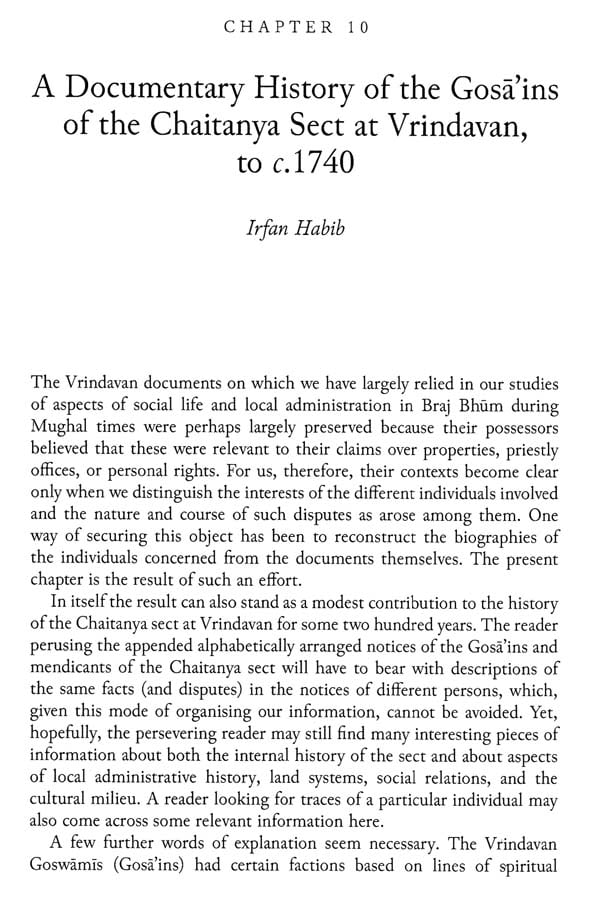 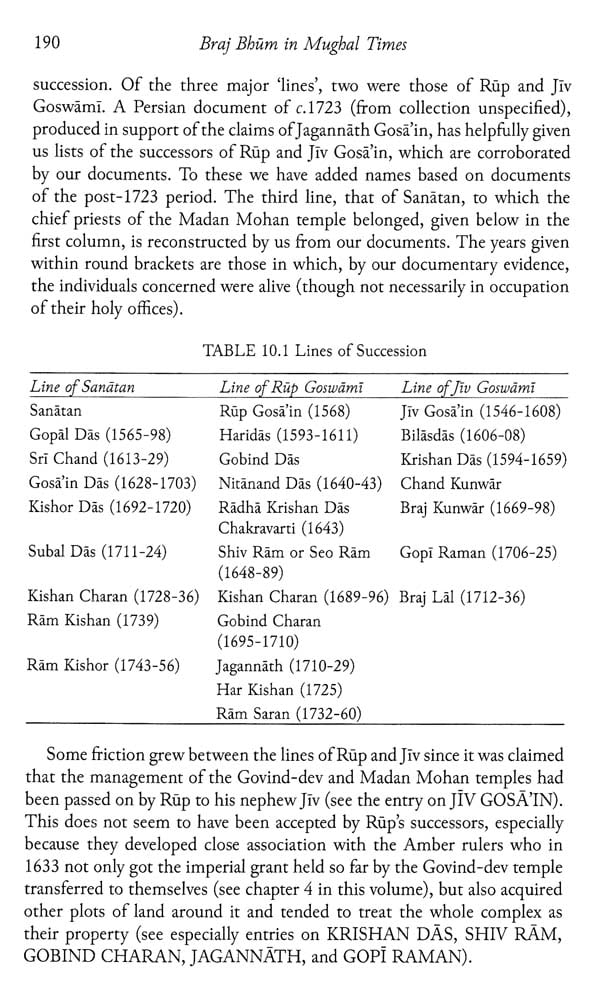 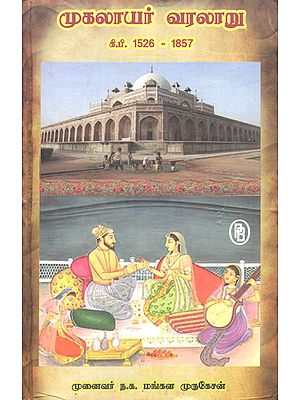 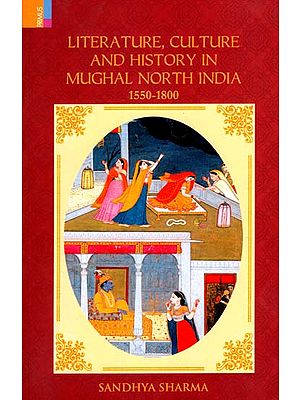 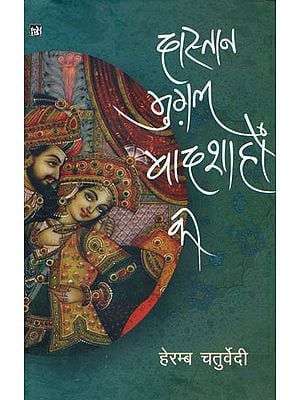 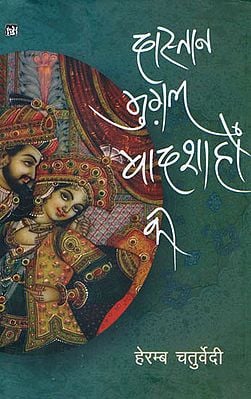 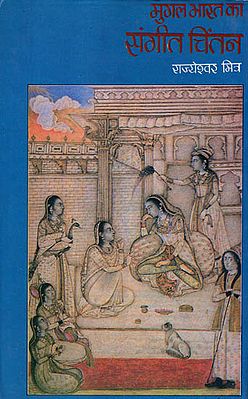 The Mughal Empire: The History and Culture of the Indian People (Volum VII)
By R.C. Majumdar
$62
FREE Delivery 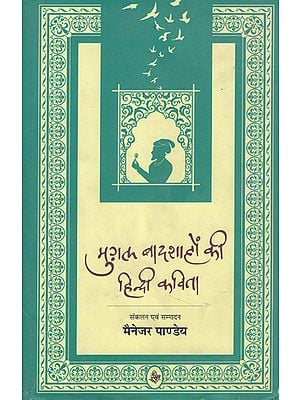 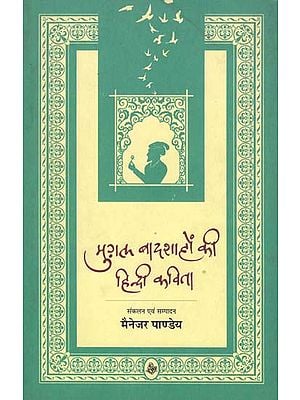 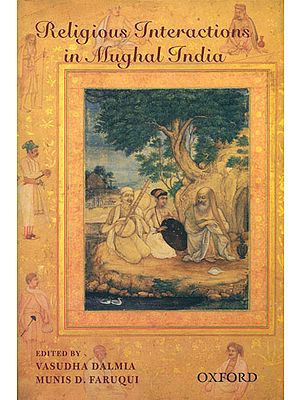 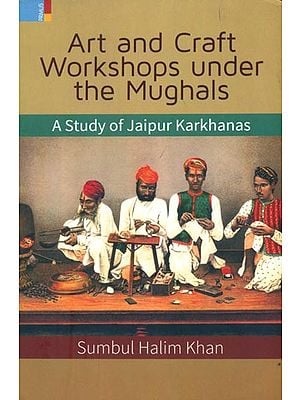 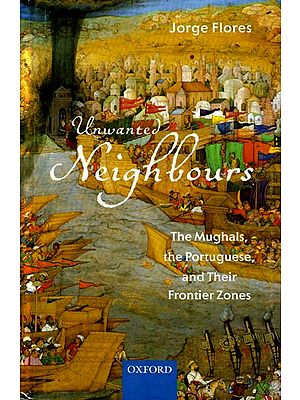 Unwanted Neighbours (The Mughals, The Portuguese, and Their Frontier Zones)
By Jorge Flores
$39
FREE Delivery