"Believing Women" in Islam: Unreading Patriarchal Interpretations of the Qur'an

The central question I have posed in this book, whether or not the Qur'an is a patriarchal text, is perhaps not a meaningful one from the Qur'an's perspective since its teachings are not framed in terms of the claims made by either traditional or modern patriarchies. However, since the Qur'an was revealed in/to an existing patriarchy and has been interpreted by adherents of patriarchies ever since, Muslim women have a stake in challenging its patriarchal exegesis.

In writing this book, I have wanted not only to challenge oppressive readings of the Qur'an but also to offer a reading that confirms that Muslim women can struggle for equality from within the framework of the Qur'an's teaching, contrary to what both conservative and progressive Muslims believe. I am always disheartened to hear progressive Muslims claim, (dis) ingenuously, it seems tome, that "Islamism is Islamism." as a young Algerian Feminist puts it in a critically acclaimed film shown recently in the West. To identify Islam inseparably with oppression is to ignore the reality of misreadings of the sacred text. Every religion is open to variant readings; the Christianity of the Crusades, the Inquisition, ad the Conquest that wiped out millions of people in the name of Christ and commerce bears little family resemblance to the liberation theology of today. Confusing Islam with "Islamism: or "Islamists" also ignores that Islam does not sanction a clergy, or invest anyone with the right to monopolize religious meaning. To accept the authority of any group and then to resign oneself to its misreadings of Islam not only makes one complicit in the continued abuse of Islam and the abuse of women in the name of Islam, but it also means losing the battle over meaning without even fighting it, as Abdullahi an-Naim (1990) reminds us.

This is not to say that attempts to rethink out understanding of Islam or to reread the Qur'an are going to be easy, given the control over religious knowledge of obscurantists and experts alike. Yet, more and more Muslims, realizing that "no one has a monopoly over the meaning of what God says," as Aref Ali Nayed (1992) puts it, are beginning to reclaim their interpretive rights. In fact, the struggle to reclaim such rights may be related proportionally to attempts by some Muslim states and clerics to keep Muslims from reading, a true irony for a people who believe that Revelation to the unlettered Prophet commenced with the single word "Iqra'!" or "Read!"

Although the Practice of Islam concerns only Muslims, Muslim Practices are of concern to the community of nations in which we live. I have thus written this work with both Muslims and non-Muslims in mind. Writing for such different audiences in a shared vocabulary has proven hard to do, not because I could not always find the right words, but because so many people are invested in the myth of radical difference; that is, the false but comforting idea that they share absolutely nothing with others. To speak to such people simultaneously and in the same language it is to threaten in some very real way the imagined borders that serve as the markers of their identifies; it is thus to call forth unrelenting animosity against oneself, as I have discovered over the years.

To conservative Muslims, terms like antipatriarchal, sexual inequality, liberation, and even hermeneutics  all of which I use liberally  smack too much of the epistemology of non-Muslim Others to be safely applied to themselves, let alone used in reading the Qur'an. Consequently, even thought I engage Western/feminist thought only circumspectly, and often to differentiate and privilege what I take to be a Qur'anic viewpoint, my Language and the mere act of engagement are likely to render me a "Western feminist" in the eyes of those Muslims who are prone to hearing in such language, and in any criticism of Muslim men, the subversive voices of Western feminists. Mislabeling Muslim women in this way not only denies the specificity, autonomy, and creativity of their thought, but it also suggests, falsely, that there is no room from within Islam to contest inequality or patriarchy.

Conversely, to feminists and non-Muslim Westerners, terms like a liberatory and antipatriarchal are much too self-referential to be applied to, or used meaningfully by, Others, especially Muslims. My use of these terms for the Qur'an, as also my favorable reading of it in comparison with Western/feminist discourses, will doubtless render me a "Muslim apologist" in their eye. To such people, it is inconceivable that Islam (usually labeled "Other/Eastern") has any truths to offer that may be commensurable with Judaism and Christianity (considered "Western"), much less with insights claimed by secular feminisms. Such views, however, ignore the scripturally linked nature and Middle Eastern origin of all three religions, hence the commonality of some of their truth claims. In positing a hyperseparation between Islam and the West, they also ignore that counterposing Islam to the West is misleading in that Islam is a way of life and not an "imagined geography," to borrow Edward Said's (1979) rich phrase; it cannot therefore meaningfully be compared to one. Further, Islam not only exists within the West but also has helped to constitute the West, as Said so compellingly demonstrated two decades ago.

What, then, of my own tendency to refer to "the West" and "Western"? In spite of initial reluctance, I have chosen to retain such terms because of their usefulness in providing descriptive access to an unhappy reality: the asymmetric relationship between a self-defined West and a Western defined Other (Islam, non-West). It is this process of naming, with its attendant material consequences, that I wish to convey rather than to suggest that the West is absolute, monolithic, or always exclusive of Islam. Nonetheless, if such terms disturb some of my readers, I ask them to read beyond them to get at my intent, which is to address Muslims and non-Muslims, women and men, believers and nonbelievers, the non-West and the West, in a broadly shared discourse of meanings. Towards that end and in the interest of facilitating access by non-Arabic speaking readers to my work, I have relied on a simplified version of the Library of Congress system of transliterations. (The glossary, beginning on page 235, may also be helpful to readers who are unfamiliar with Arabic words.)

Back of the book:

A significant contribution to a new genre of scholarship, this book takes readers into the very heart of Islamic teachings on women, gender and patriarchy, allowing them to understand Islam through its most sacred scripture rather than through cultural practices or Western media stereotypes. Serious and well researched, this is a rich resource book.

Barlas develops a believer's reading of the Qur'an that demonstrates the egalitarian and antipatriarchal nature of its teachings.

Asma Barlas is Associate Professor and chair of Politics and interim director of the Centre for the Study of Culture, Race and Ethnicity at Ithaca College, New York. 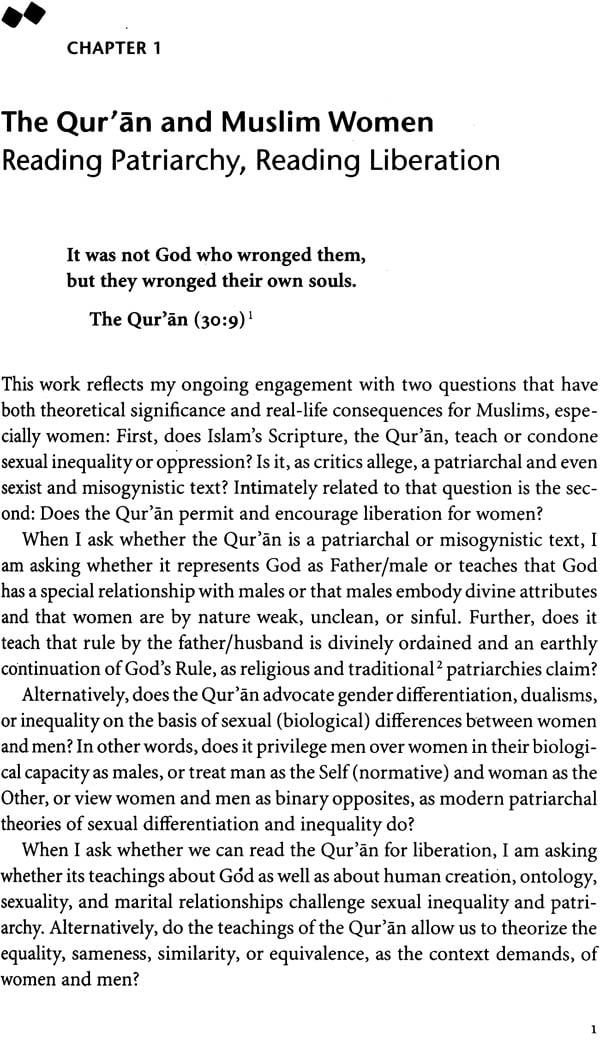 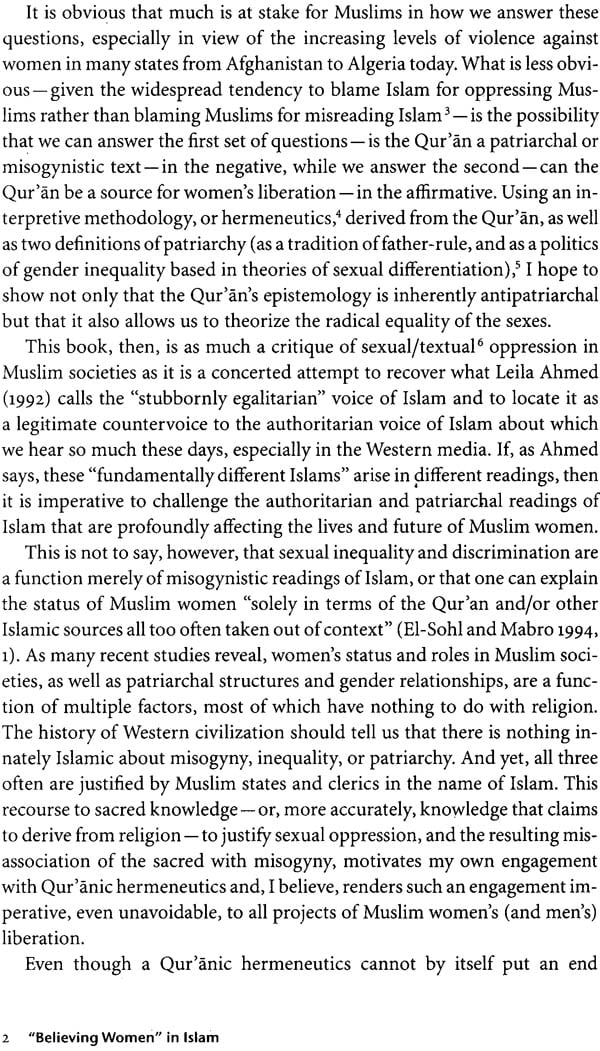 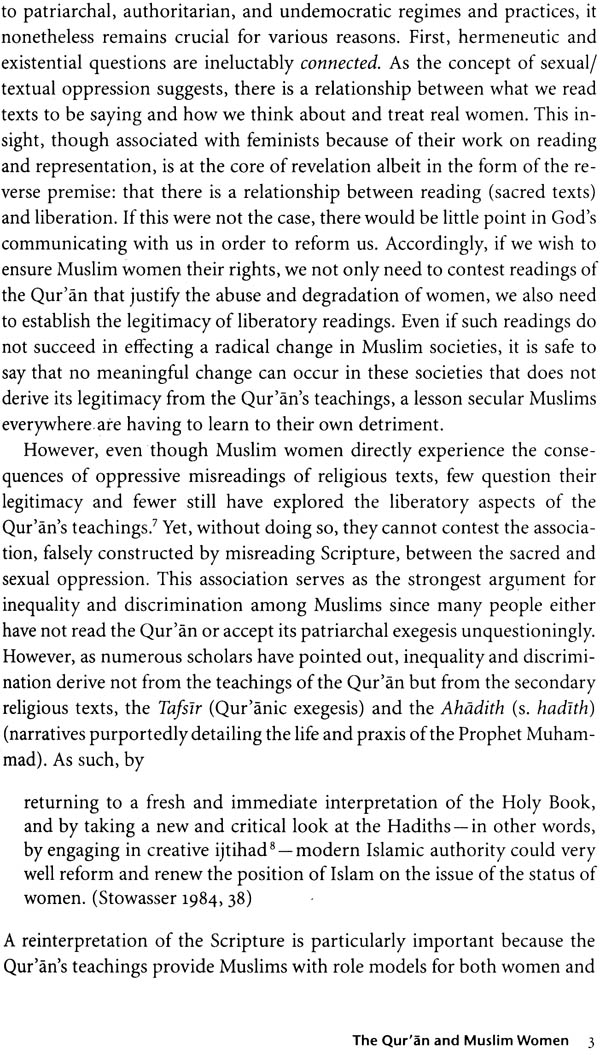 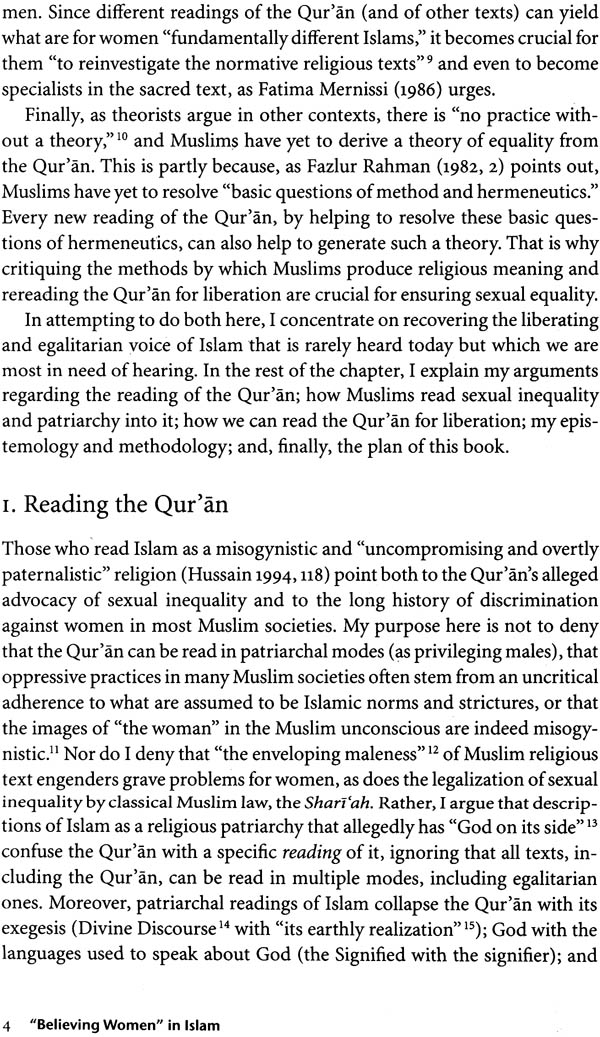 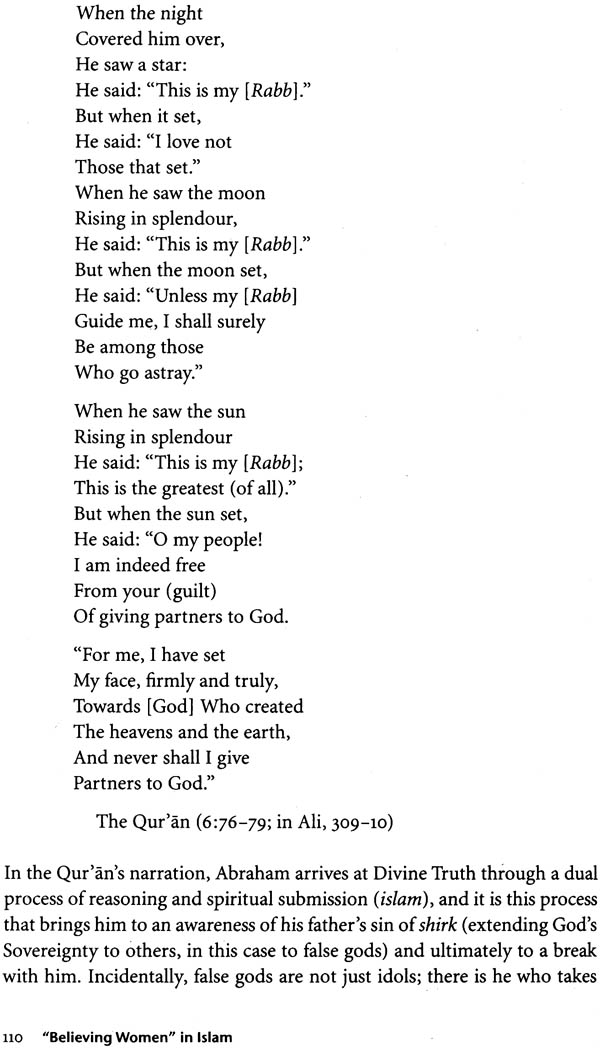 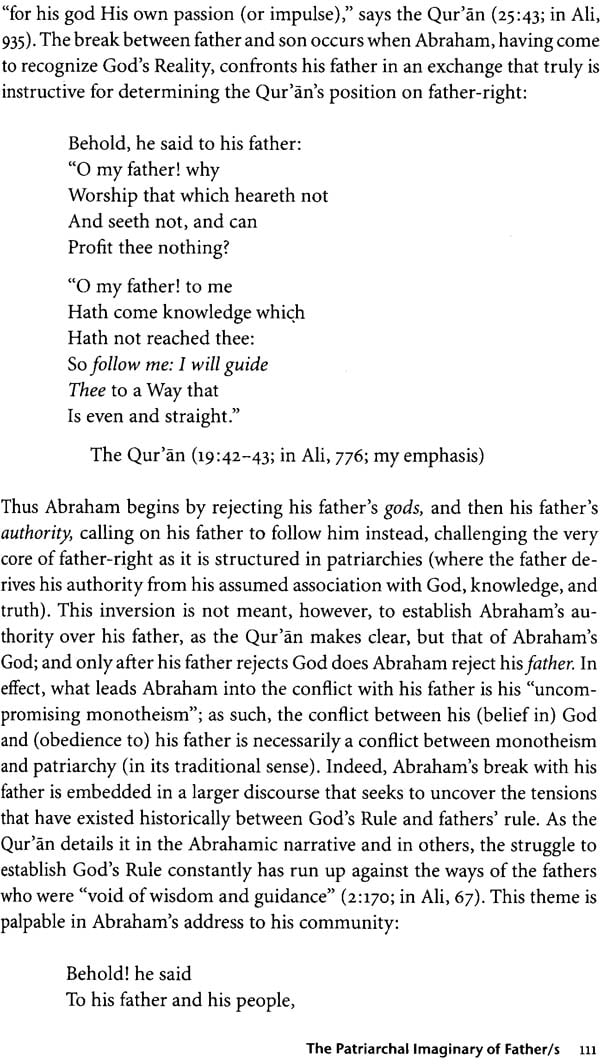 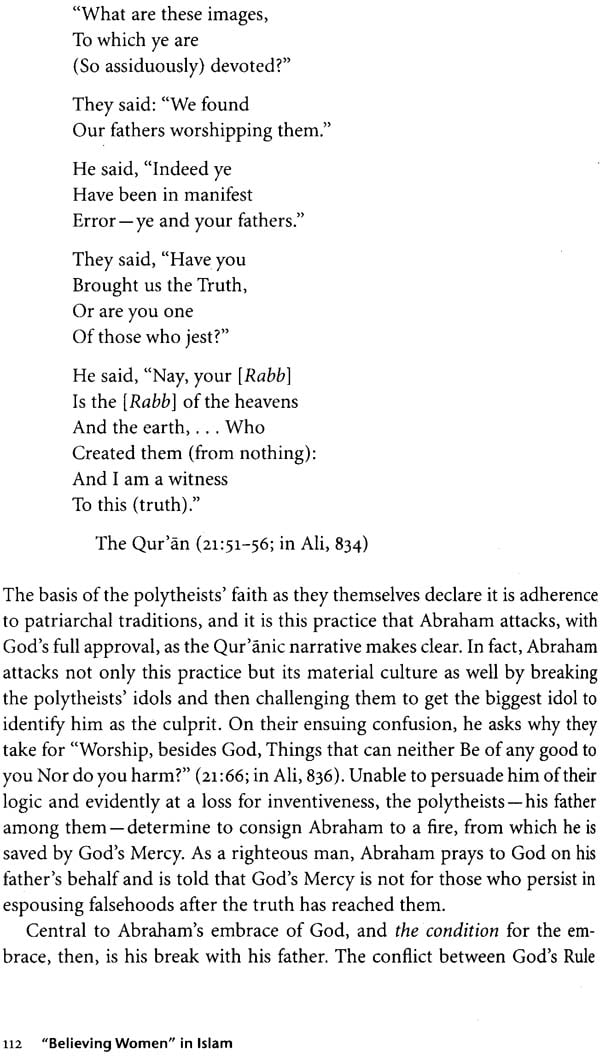 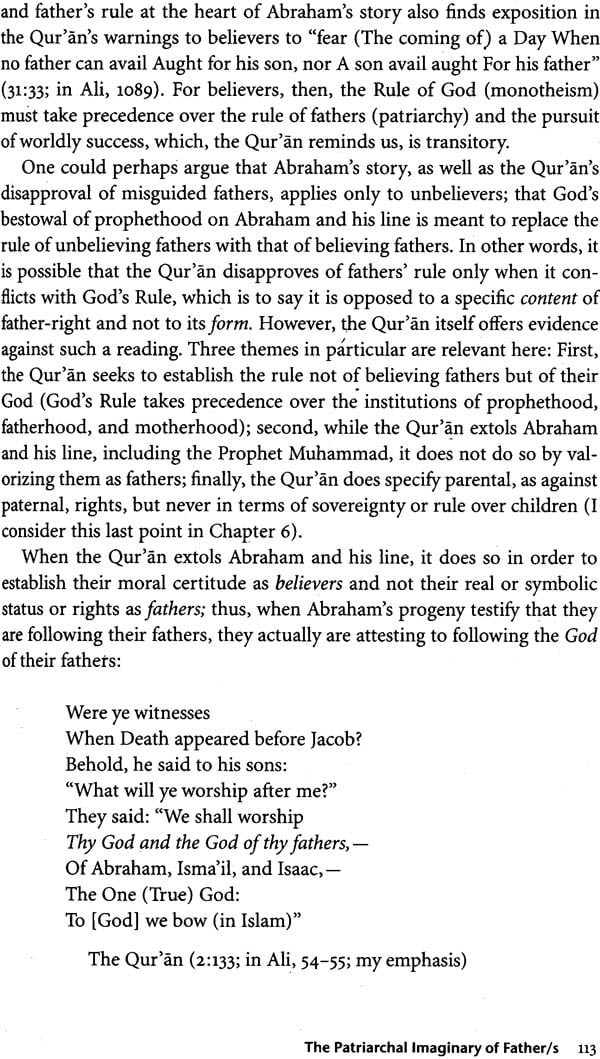 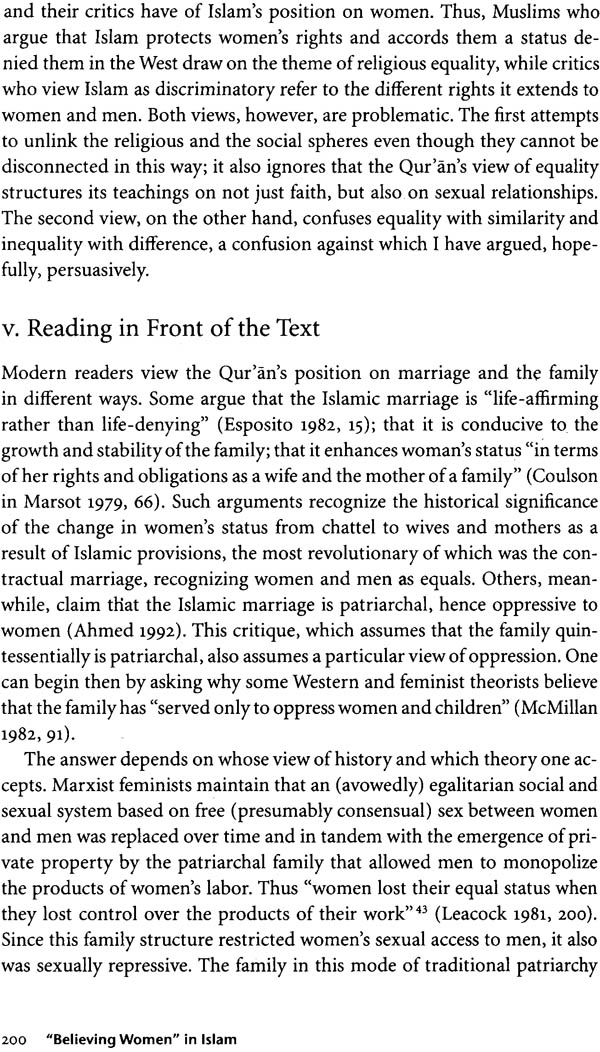 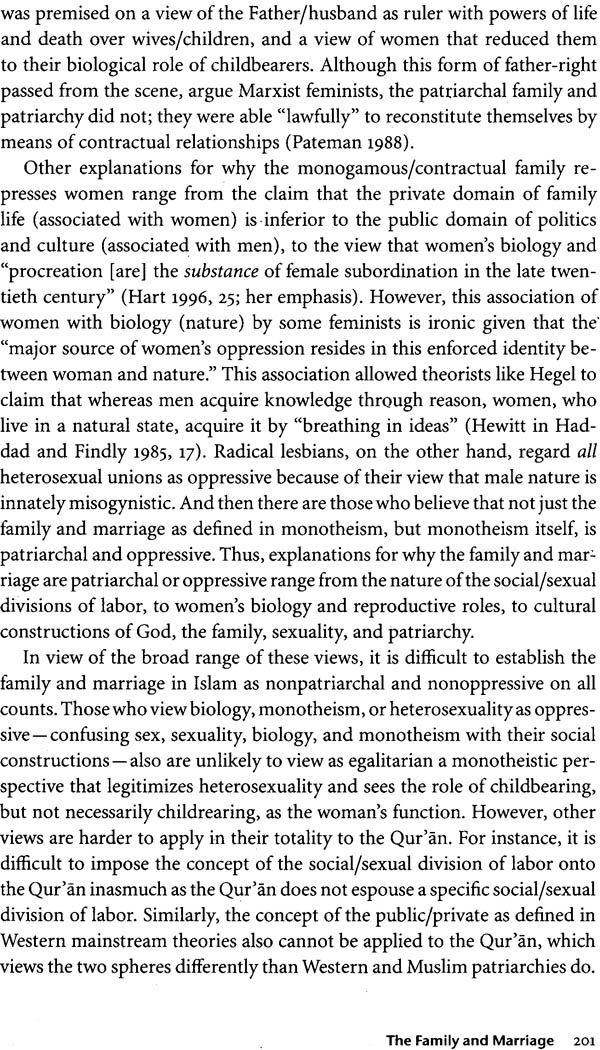 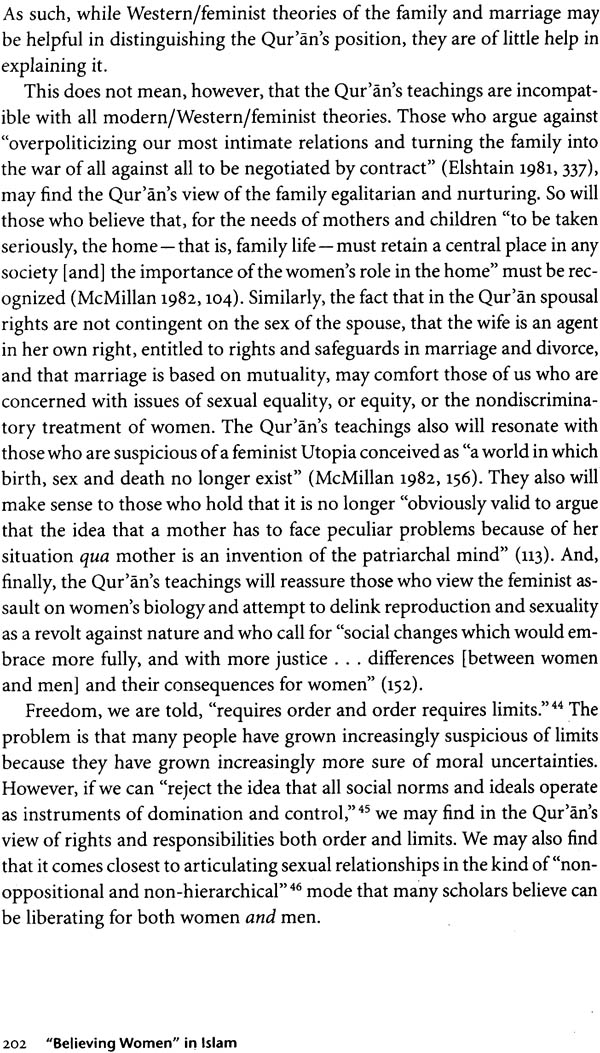 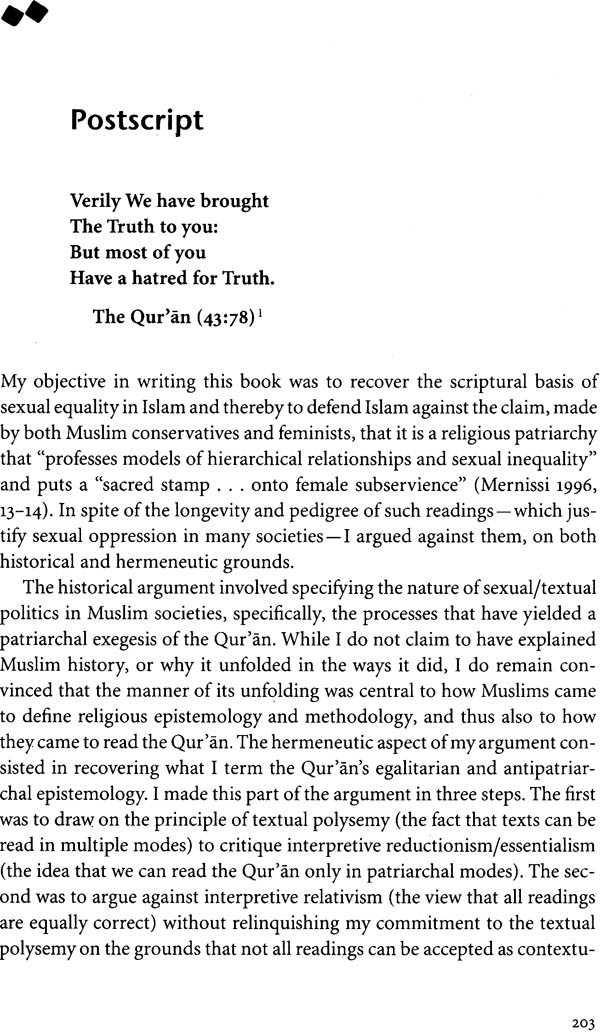 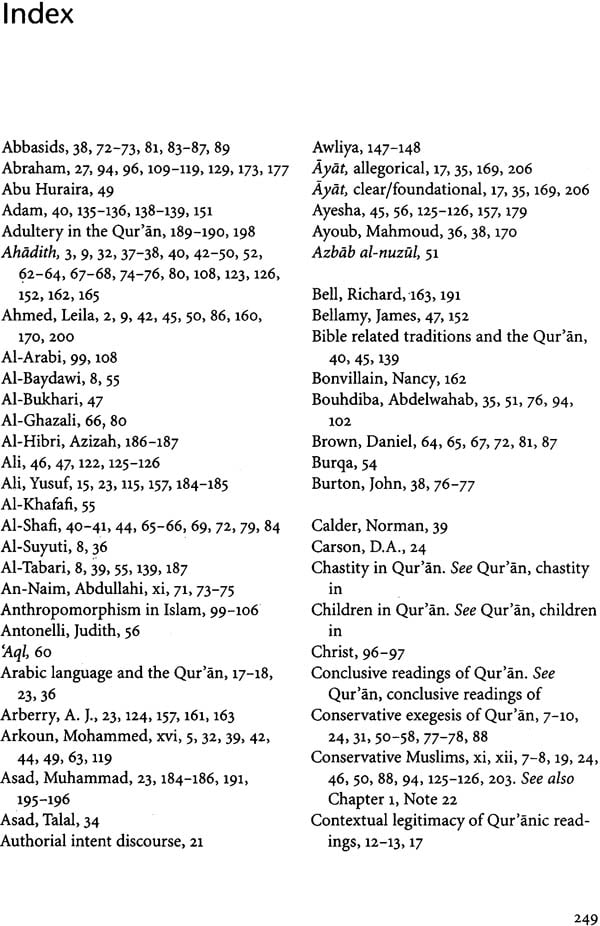 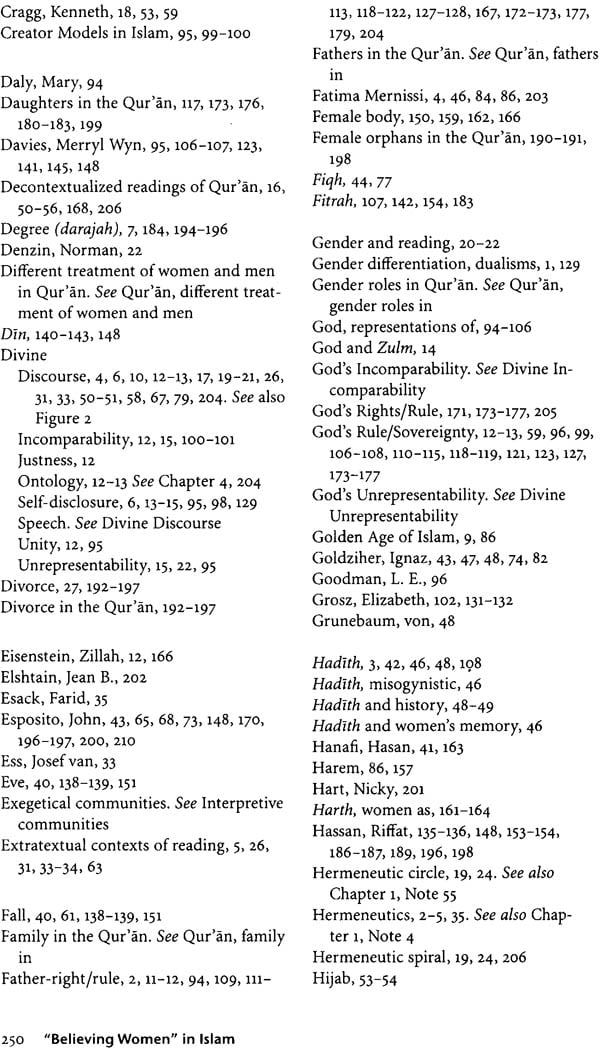 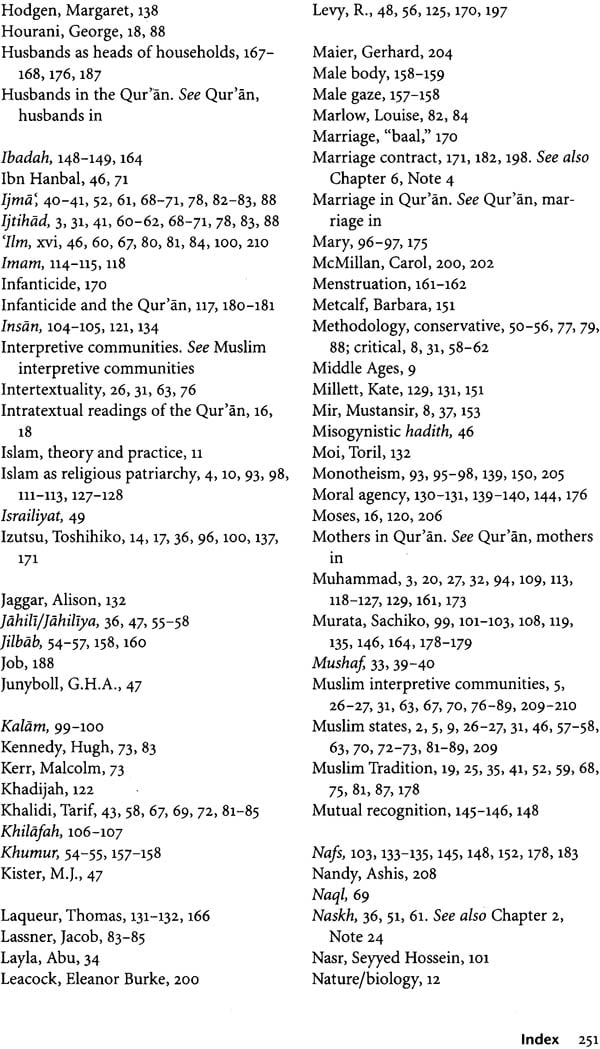 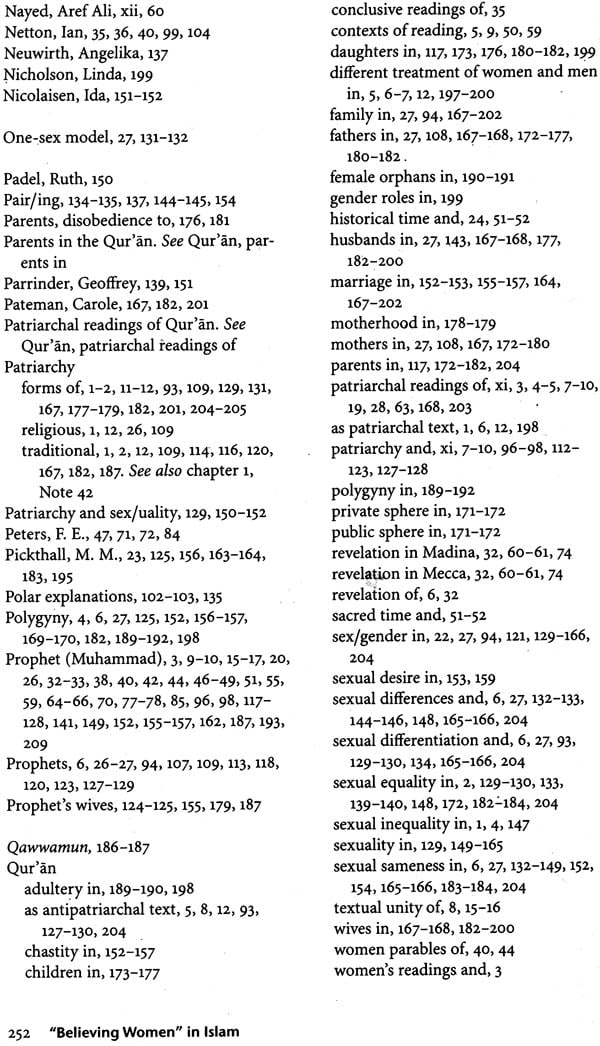 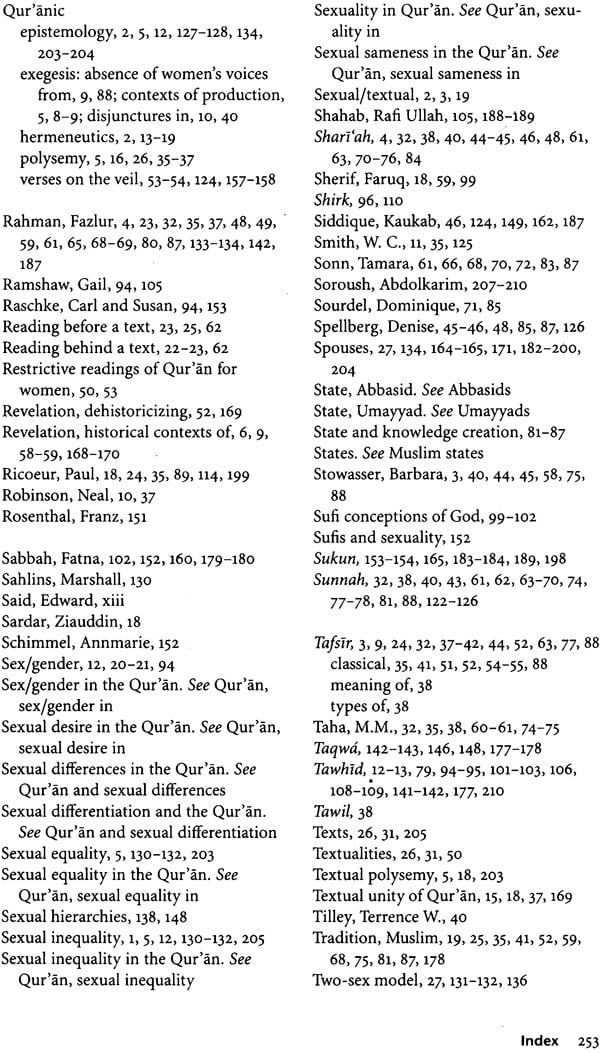 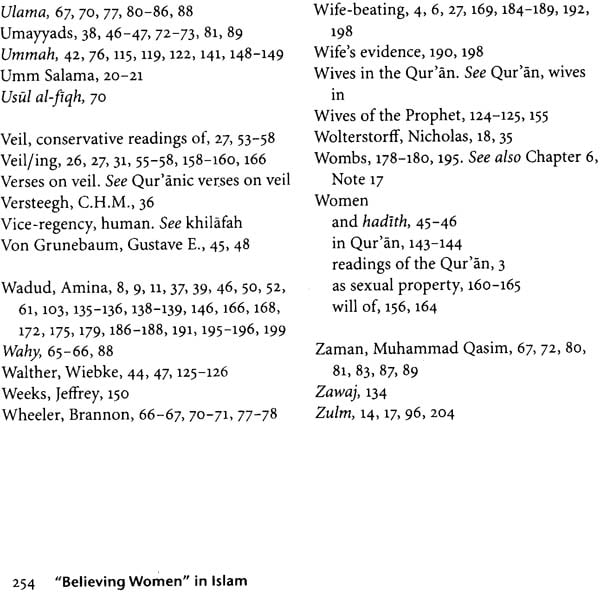