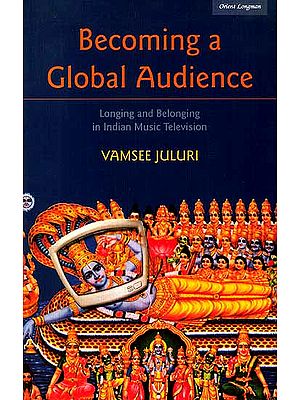 My scholarly purpose in writing this book was to being together what had been divergent traditions in the field of media studies; audience research on the one hand, and international communication on the other. Since then, it has been gratifying to see that my work has not been alone, but rather part of a moment that has arisen at a time that has demanded it. Although audience studies had been almost written off in the Western academy a decade ago under a thrall of high philosophical academic vagaries, the emergence of a critical opposition to this intellectual fatalism, and more importantly, the publication of numerous audience research-based studies of globalization, as proved that there is much that can be done in this exciting if challenging field of inquiry.

Behind these academic ambitions though, has been a sense of generational wonder-and dismay too-at the cultural storm that was unleashed into the heart of India with the coming of satellite television in 1991. s someone who grew up in a relatively more tranquil media environment in India, this change was enormous. For instance, I can still remember the day television came into our lives in Hyderabad in the late 1970s, even if it was only Paalu-Chelu, the time-honoured farmers' magazine. In 1991, everything changed. In one swoop, my generation went from a childhood of declining Nuhruvian ideals to one of unabashed consumerism and globalization, and there are now at least two generation of Indians for whom television has been a given from birth. it was under these challenging circumstances that I undertook the research on which this book is based, and this research would of course not have been possible but for the participation and support all the people who volunteered to speak about television and their lives. I would like to salute them once again, and also acknowledge in particular two people in Hyderabad who made a great deal of my work possible; Dr. Vasudeva Rao, and Mr. Vinayak, whose resourcefulness and support eased my transition into an interview setting. During the interviews, I was not yet sure of what all these observations would mean, but ultimately, it was an interest in one overwhelming reality the sustained my work; the fact that India had changed rapidly.

This book is an attempt to face up to that change and understand it for what it is; first and foremost as an aspect of a global phenomenon, an unfurling of political and economic forces on a worldwide scale and with unilateral and totalitarian cultural ambitions. At the same time, it is an attempt to recentre India in the debates about media globalization. Theories of media globalization have, despite good intentions, sometimes replicated the same imperialism they sought to critique. It is very easy to claims that the global media are turning everyone around the world into American, but the reality is more complex. My take on globalization is an Indian one, for, as I learned in the course of interviewing young music television viewers for this book, there is a very Indian experience of globalization; it suffers, like most constituencies affected by globalization, but it also aspires to something that I cannot dismiss as false consciousness.

In the late 1990s, when I conducted the interviews on which this study is based, viewers of music television seemed to be expressing an aspiration that was egalitarian and Universalist. They were seeing good things in all the new media forms that were confronting them. in countdown shows, they saw an example of Indian television becoming democratic and inclusive. In music videos like Made in India, they were finding a new, global role for India based on mutual recognition and universal values. They inhabited a vision for India that seemed noble, to say to least. But, if one were to scrutinize the images and narratives in these countdown shows and music videos, the nobility of audience sentiment seems powerless against the tides of narrow and unrepresentative ideology embodied in the post-liberating its own commercialization through the most pitiful stereotypes even as its audiences were reading somethings deeper.

My attempt in this book therefore has been to critique the rise of global television in India through an outline of a model of appropriation, rather than one of injection. I o not argue that Indian viewers have simply absorbed "foreign" ideals, but show that they found on their television sets, their own sense of the best of everything; but in the larger scheme of things, this sentiment remains just that, a sentiment arising in private reception with little social or political of Indian media reception has been further reduced to a commodified menu of mean mothers-in-laws and vengeful children on soap operas and a slop of self-debasing "reality" shows. The rationalization of television audience-building and programming, the shift in Indian cinema from family values to themes of urban middle class alienation and selfishness, the branding of politics into lifestyle slogans, the ongoing severance of privilege and accountability in the era of liberalization, and the broader global backdrop of militarism and institutionalized violence, all of these have given the relatively entertaining fantasies of Indian music television audiences more than an ethnographic value.

If there is one great merit to Indian popular culture being taken seriously in academics, it is the fact that popular culture in India contains the potential for a social vision that exceeds its status as an object of academic inquiry. I believe that there are seeds in our popular cultural reception practices that embody a vision of the world that is far more timely and organic than our media system or intellectual practices would give credit for. It is that popular notion of the world; a globality based not one consumption or xenophobia that is in evidence in this study. In the American media worldview, the world outside America appears as quite the opposite; a source of fear and difference; if not for terrorism then for stealing American jobs. In India, and in Indian media, there is perhaps hope for a better vision for the nation and the world.

My hope is that this book serves to nudge, invite, or incite its readers into the need for such an Indian-global social vision. The nuggets of this, in the words of those young people who were the first generation of Indians to be raises on a frenzied cultural diet of global music television, suggests a sentiment long associated with Indian cinema. But can this sentiment resist the changes in cultural forms that shroud it in the media? Worse, can it survive the social fragmentations and economic devastations of globalization? Given its past record, it probably will. But it will take a lot of work, imaginative work, to nonviolence and nonalignment, not only for us, but for the world at large? In this age of realpolitik and commerce, such a plea may seem irrelevant. But the good thing though is that this explosion of human energy that we call globalization does not have to sink into its own cruel and hegemonic forms. It could well be another hope for India's day in the sun.

Such a day, some argue is already here, with call-centers, and a couple of the door (and it hurts the rest with all the finality of a slamming door). However, India's best bet on the world stage, as I see in this study, is its universalism. It is in evidence in the words of the participants in this study, and it seeks an intellectual formation in the arguments in the arguments in this book. But what it will turn into in the minds and hearts of the global-Indians of tomorrow is a dream worth carrying. It is my hope that in the hands of readers in India this book will contribute to a nucleus of social consciousness and serve to generate as yet unseen ways of living in this world. If you are a student of the media, a practitioner, or an enlightened consumer, it would be worth asking how a better media story about India and the world could emerge. Does the globalization of media and culture necessarily have to be about the "lowest common denominator" or could it be instead about the "Highest universal aspiration"?

What does globalization mean for the television audience? Becoming a Global Audience examines concerns of cultural imperialism in relation to the actual experience of television reception in a postcolonial context. The rise of satellite television in India in the context of economic liberalization in 1991 has been marked by the localization of global music television networks like MTV and Channel V. this book argues, however, that this "Indianization" is no cause for celebration. Using in-depth interviews with Indian music television viewers and theoretical approaches drawn from political-economic, cultural and post-colonial studies, it argues instead that the reception of "Top Ten" shows and nationalistic music videos is part of a profound reordering and appropriation of common sense under the changing social relations of globalization.