Asian Embroidery is the result of an International Seminar held by Crafts Council of India, which was coordinated by the well-known authority on textiles, Jasleen Dhamija. Writers, researchers, professors, who have spent a lifetime researching I different regions of Asia came together to share their knowledge. Besides well-known subjects as Phulkari, Bagh, the Central Asian Suzani, there are the little known embroideries of the Philippines, of Kyrgyzstan, of the Chinese settlers in Indonesia, the beadwork of Sarawak. There is the brilliant work of the symbolic significance of light and shining surfaces and a broad sweep of the creative expressions of different regions. The contributors are well-known authorities Padma Shri Jagdish Mittal, Prof. Joanne Eicher, Prof. Victoria Rivers, John Gillow, Prof. Shehnaz Ismail, Dr. Judy Frater, Ruby Ghuznavi, Edric Ong and many others.

Unesco's decision to give their Award for Creativity in Crafts to work on embroidery in 2001 prompted the Crafts Council of India to host a seminar on Asian Embroidery: A Expression. Researchers, master embroiderers, scholars, social workers, collectors came from many parts of the world to join in the seminar. It was not only those who presented papers who brought together a wide range of knowledge that enriched the seminar but it was many others who came to listen, to interject their observations, to share experiences, to question the findings, who made the experience richer.

A remote villager from Vietnam was delighted to see her work being discussed, analysed and praised in a gathering of 200 people. Edric One, architect, designer, scholar, working tirelessly for the multiple ethnic people of Sarawak. Brought alive the lift style of the original tribes of Sarawak through their bead work. Joanne Eicher, the great textile scholar of African Textiles and Trade Textiles, brought alive the importance of Indian embroideries made specially for the Kalabari of Cross River States in Nigeria. While Dinara Chochunbaeva carried us to the Yurts of Kyrgyzstan and Kazakistan in the remote parts of Central Asia and told us of the role they play in the life of the nomadic families.

This volume is the result of research carried out by many individuals and organizations that have been working for the later half of the previous century in many parts of the world and these are their presentations at the seminar.

Embroidery has only recently been recognised as an important creative expression of a people and an important repository of the oral traditions which have been maintained by the women. A piece of embroidery can unravel the history of a family. The Vari-da-Bagh which began to be embroidered by the grandmother at the birth of her grandson and often took over ten years gave us the history of the family. Through the introduction of a colour, of a change in pattern it would indicate life's rhythm. The golden yellow colour of the embroidery would suddenly have a black dot, to guard it from the evil eye, dark blue recorded the death of a person, a pink square indicated the joyousness of a wedding, the green birth of a child. The sudden change in pattern, in a small section, could indicate the visit of the beloved daughter, who embroidered her contribution to the family Bagh. It is the Bagh which was wrapped around the bride, as she entered her new home. Symbolising that she was now a part of the family and shared in their joys and sorrows.

The volume began by presenting the history of embroidery, Padma Shri Jagdish Mittal, the great scholar, artist and collector, whose discerning eye has made one of the most outstanding collections of Indian art, has written about the history of Indian embroidery. Ruby Palchoudhury, and Satarupa Dutta presented their research on Indo-Portuguese embroidery on which very little is known. Carter Malik's work on Uzbekistan gives us fresh insights into Suzani because of five years of fieldwork. Victoria Rivers who has been researching on Shining Cloth for the last twenty years, presents an erudite paper on the richness of embroidery, using natural objects, beetle wings, gold threads, shimmering mirrors, to express the beliefs, the history and symbolic significance of embroidery, the world over. She demonstrates eloquently the multi-layered significance of a piece of embroidery. Sunita Shahaney links the Kasuti of Karnataka with its ancient past. Nivedita Krishna Rao carried us to the Tanda of the Lambadis of Andhra Where they express their lack of attachment to material objects by making their clothes from pieces of cloth like the wandering dervishes and sadhus. Yet their joyousness, their lack of inhibitions, their love of open spaces is expressed in their use of bright colours and reflecting mirrors. It is unfortunate that we did not receive the papers from Robyn Maxwell and thus could not include it in this volume.

However, the material is rich and most of the presentations are being published for the first time to enrich our knowledge of the world of embroidery.

Jasleen Dhamija, who has edited and put together the book on Asian Embroidery, is a well-known researcher and writer on Textiles History. She has written and edited a number of publications on the Living Cultural Traditions of Asia and has been visiting faculty at institutes in India and Australia. She was awarded the Hill Professorship in University of Minnesota. She worked on development of handicrafts, textiles in India at the pioneering stage for 17 yeas. She has worked with United Nations organizations in Iran, Central Asia, East Europe, Africa and South East Asia. She also evaluated the work of UNESCO for the last decade of the previous millennium. 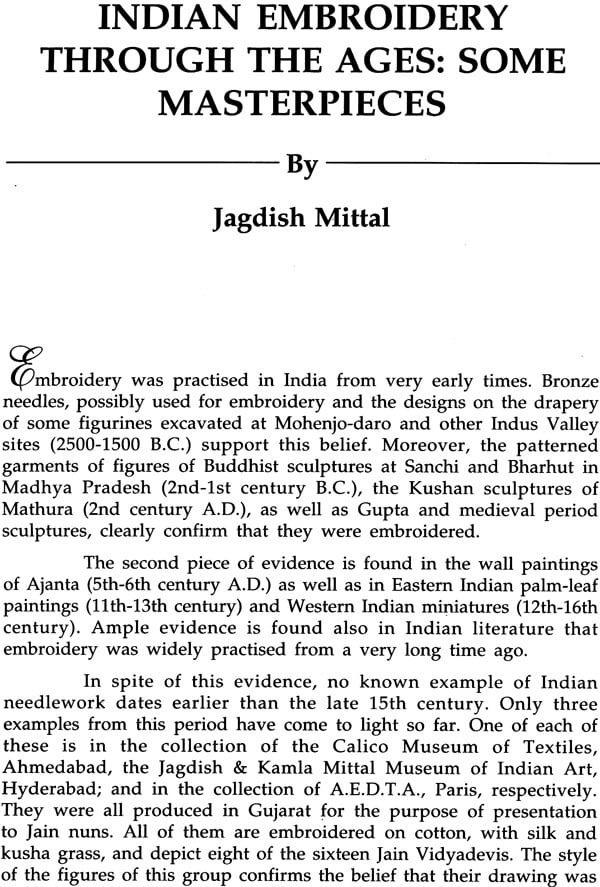 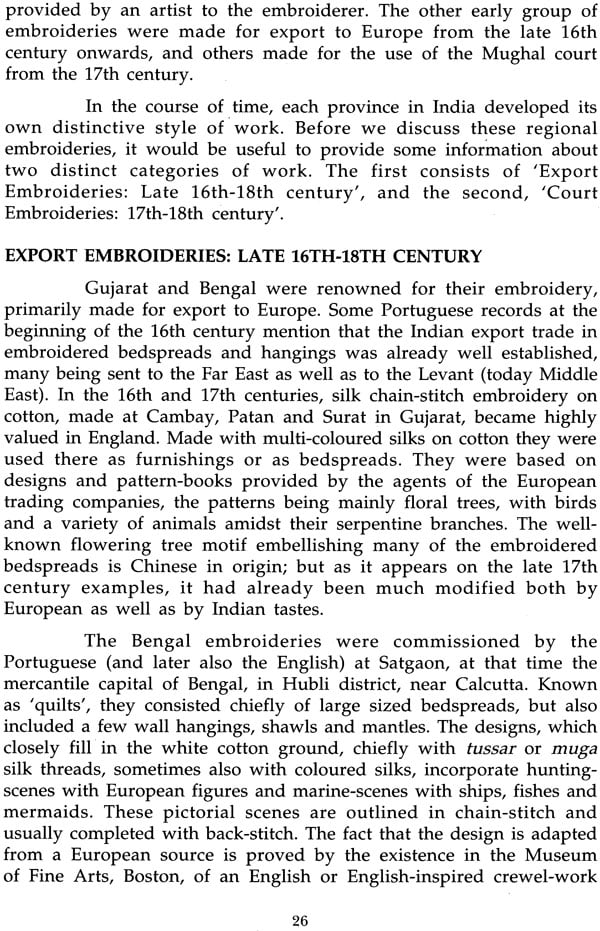 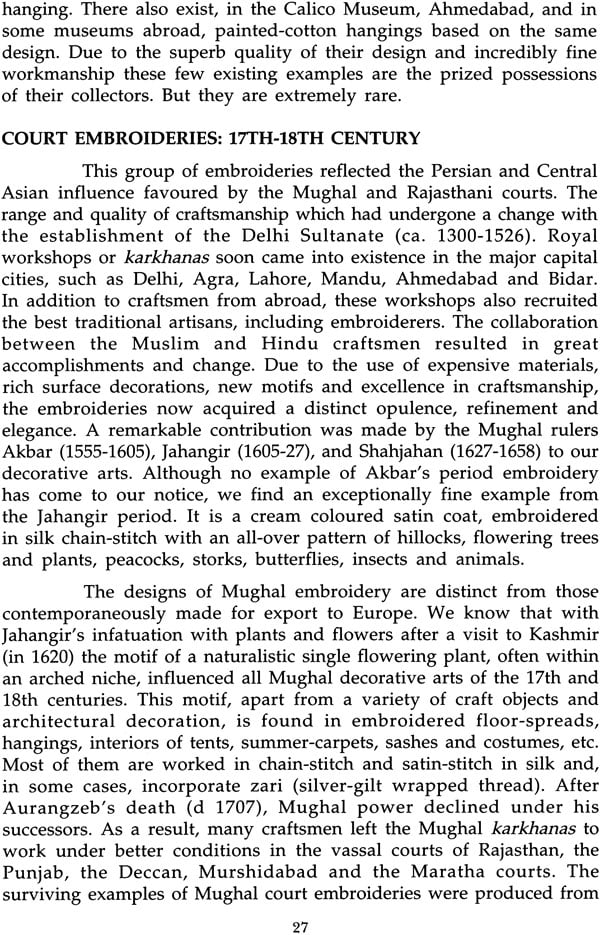 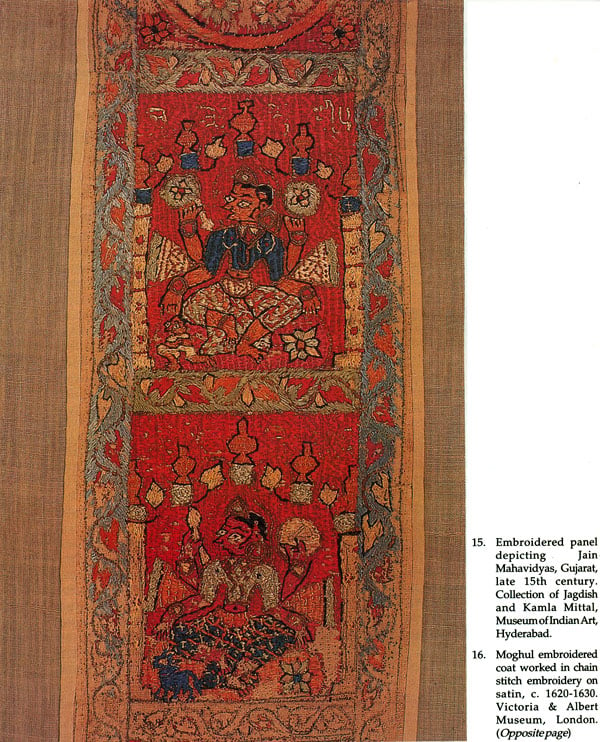 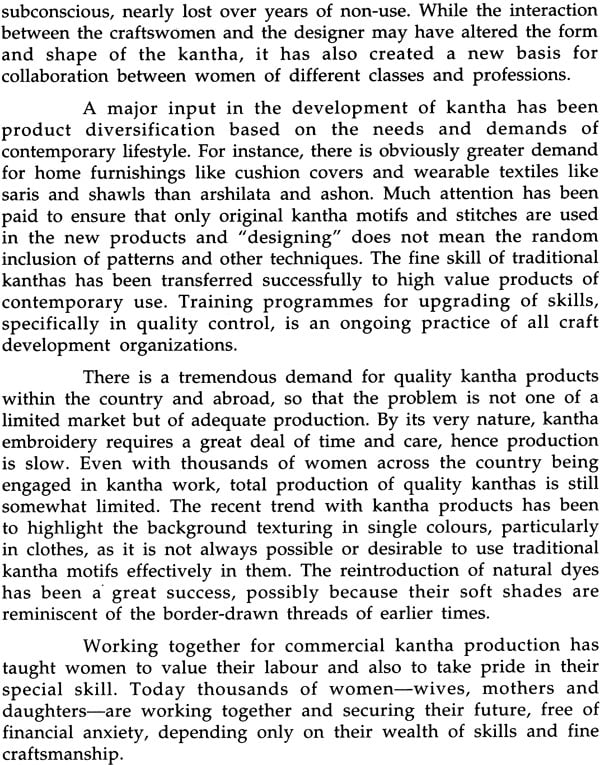 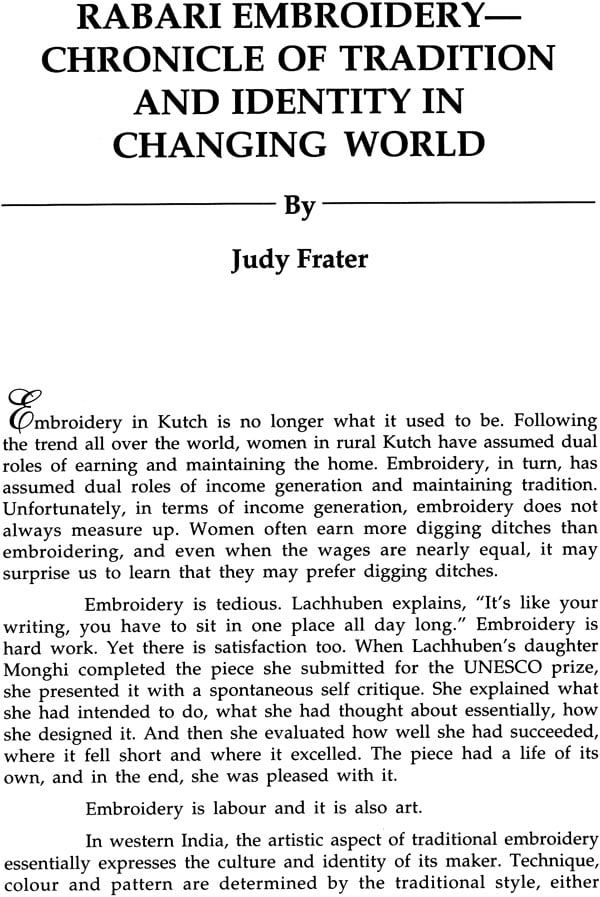 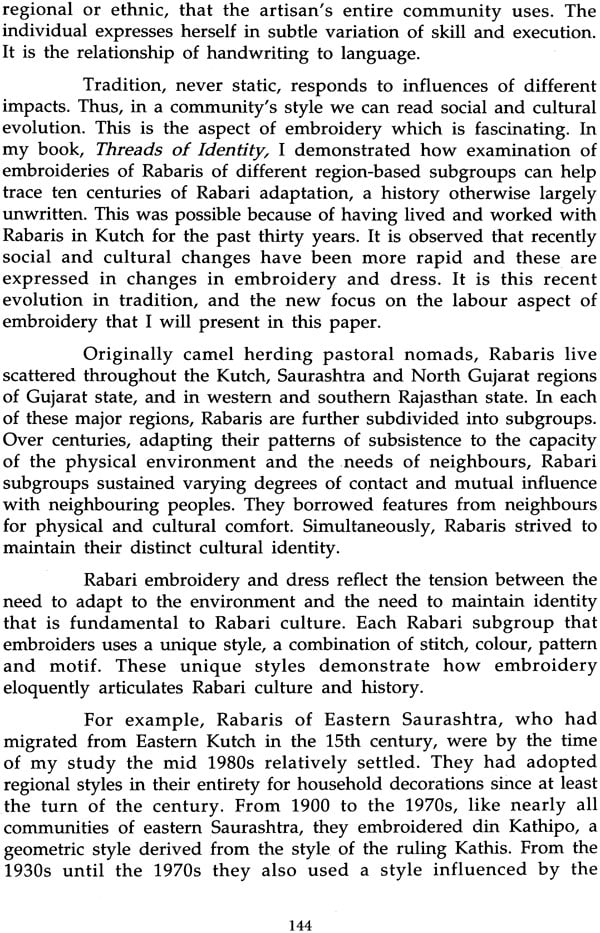 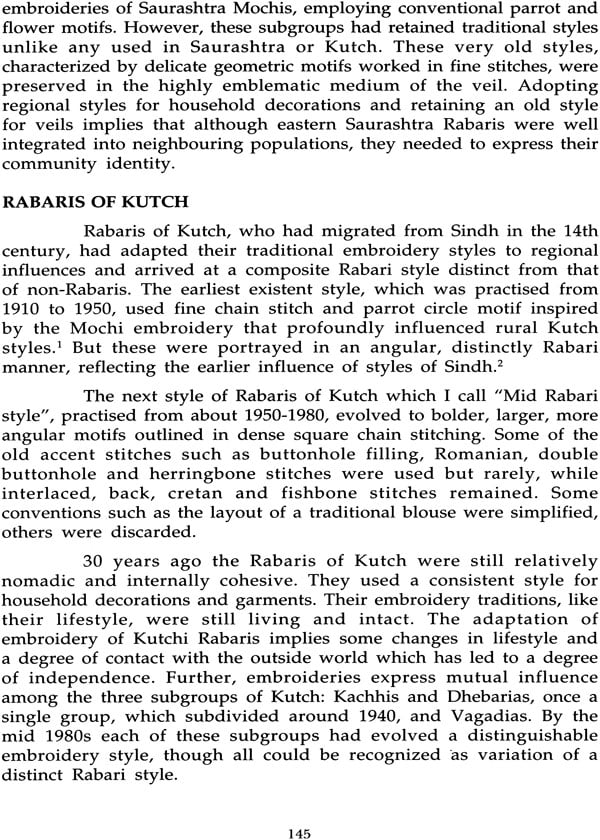 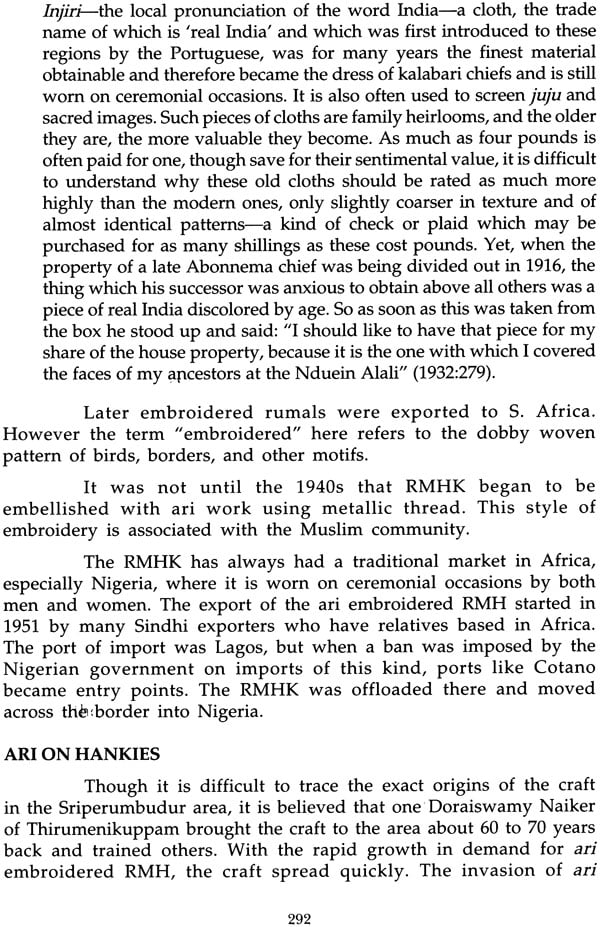 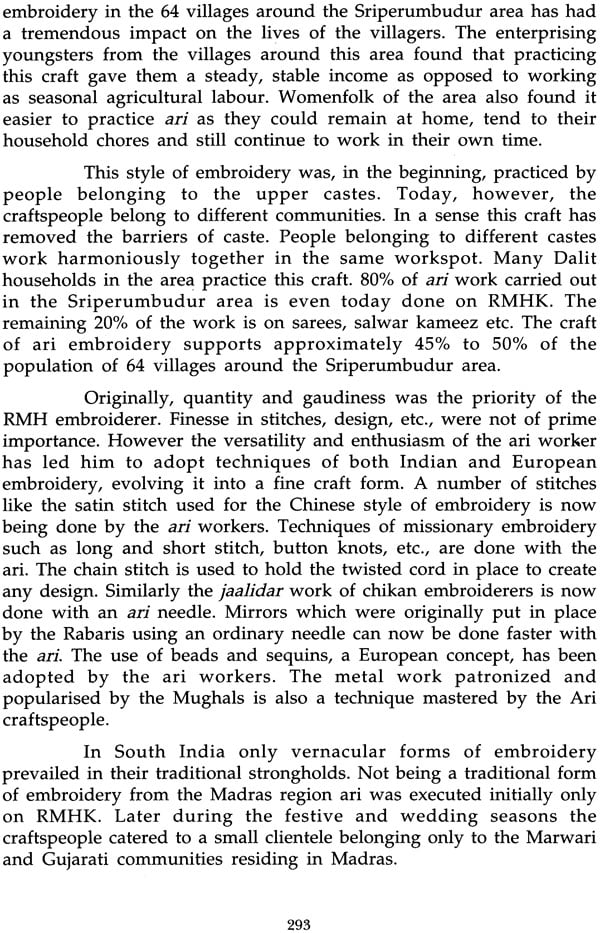 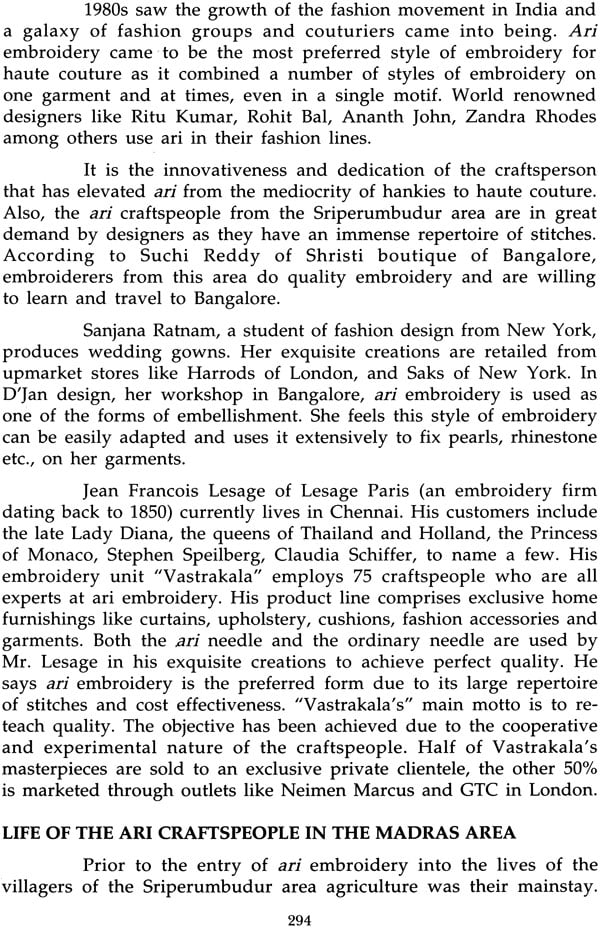 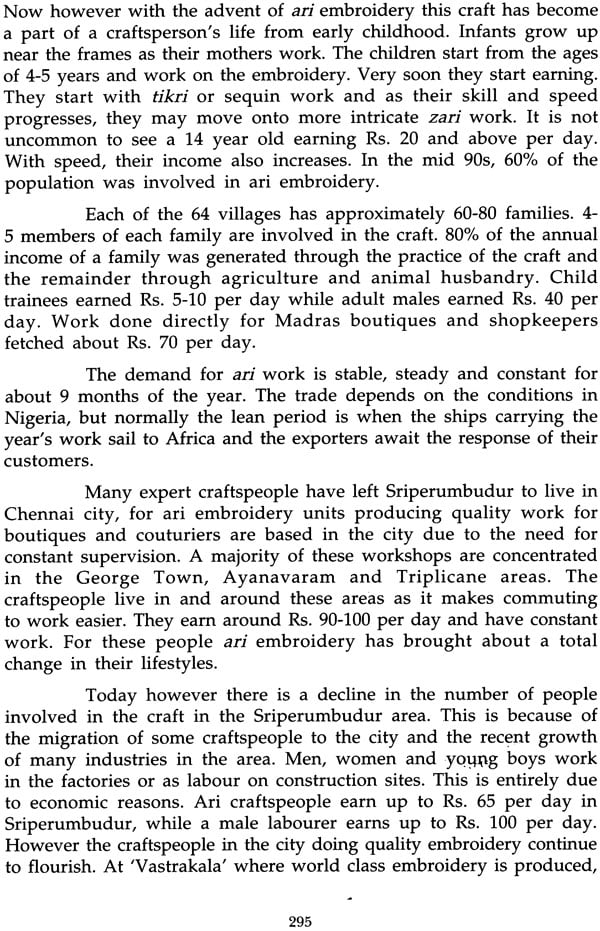 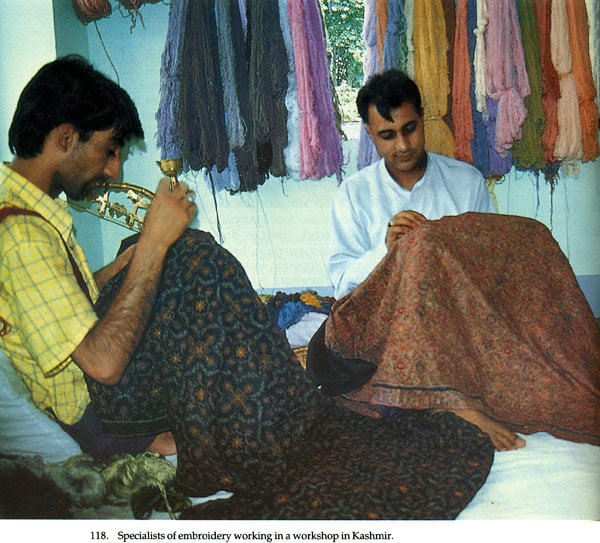 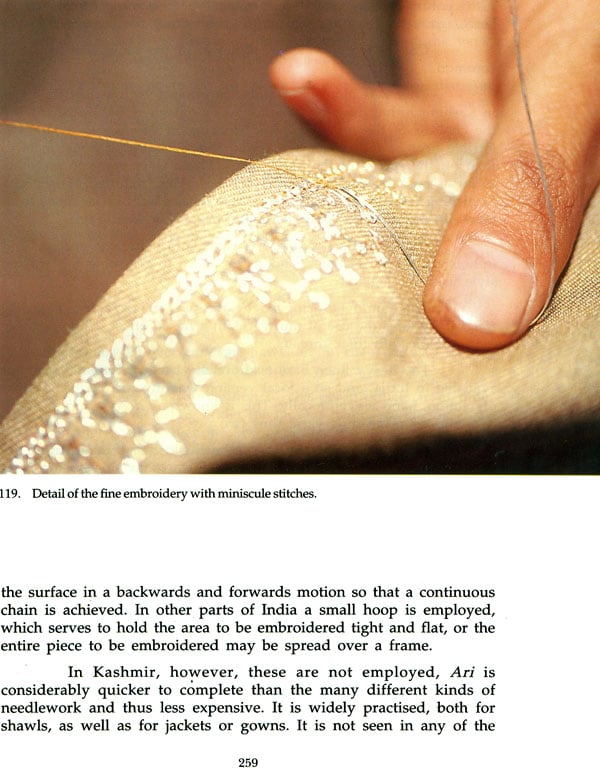 Embroidery Designs: Blouses
By Nirmala C. Mistry
$21
Out of Stock Phulkari: From The Realm of Women's Creativity (A Tradition of Handmade Embroidery of Punjab and Haryana)
Publisher Indira Gandhi National Centre for the Arts and Aryan Books International
$43
FREE Delivery Chikankari (A Lucknawi Tradition)
By Paola Manfredi
$89
Out of Stock