Arunachala Talks: Spiritual Wisdom Offered in a Direct Simple Expression to Touch Your Heart (With DVD Inside) 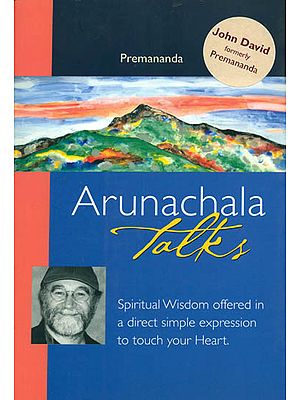 Arunachala Talks consists of seven talks given to the forty-five participants in my annual Arunachala Retreat. The eighth talk was given in Europe on my return from India. This retreat, held in Tiruvannamalai, India, has been an annual event for the last six years. The message that is being communicated is the ancent Indian wisdom. I have nothing to contribute to that, it appears from emptiness and expresses through the body known as Premananda.

My contribution is in the communication of the message. I am a painter, a visual and creative person. I delight in the Arts. Music has a large space in my meetings and the community growing around me attracts creative people. So this book is unusual because great love has gone into its design. Hence the Community's photographs, graphic design and paintings are spread throughout this book, the colours reflecting the joy of the vehicle, my ecstasy.

The linage of Indian sages stretches back through Shankara to the ancient Indian wisdom which appears to be the core wisdom of most religions. Buddha walked the plains of North India and Jesus is reputed to have died in Kashmir.

Papaji's message was to 'Keep quiet' and from him I came to understand the great value of Self-enquiry, as proposed by Ramana Maharshi. 'Who am I?' and 'Be as you are', are the main components of the message I wish to share and are the essence of the talks in this book.

These eight talks discuss the main issues that need to be considered on the path to Awakening. The Teaching of Ramana Maharshi sets out how to follow Self-enquiry, which he considered the most direct route to Self-realisation. Destiny suggests that everything in our lives just happens, independent of our notion of 'doing our lives'. The Spiritual Roadmap gives an overview of the Spiritual journey.

In The Fortress I consider the ego or false Self, going into its origin and showing how it creates a filter that covers our True Nature. Authentic Love amplifies what was spoken in The Self is Radiant. Love simply is and you are that. I show how, for so many people, falling in love Hollywood style normally becomes the ultimate illusion, preventing Awakening.

Devotion examines the way of the Heart and shows how this is a necessary component in the search for Truth, more easily available in Asia than the West. Presence makes it clear that this is the simple Truth. When we are not in the past or future then we are present in the Now of this moment. The conditioned mind stops flowing and we are there in the vast power of Emptiness, which is our True Nature. In Truth, Peace and Love.

Premananda was born in 1944 in Bangor, Wales, and grew up in Ipswich, a small farming town in England, 100 kilometres northeast of London. His family life as the eldest son with his parents, two brothers and sister was stable and loving, with plenty of space and encouragement for adventure and play. As a teenager he would have long conversations and debates with his father, far into the night, about the world, life and philosophy. Out of all that talking he was left with a very strong question that gradually increased during his early twenties but he had no idea what the answer might be. The question seemed to be about not knowing what to do with his life, not finding meaning in the world around him.

When he was nineteen, Premananda left the family and moved to London to study civil engineering, always with the strong feeling that he never really fitted in. He worked for a few years in a progressive design office with interesting people, specialising in building structures. However, he experienced sadness and confusion, desperately looking for the place where he would feel comfortable. Eventually he went back to university to study architecture. The curriculum was not only about architecture but included many other related subjects such as human civilization and culture. He graduated as an architect with a longing to explore himself and his relationship with life.

In his late twenties he worked as an architect and English teacher in Japan. He was also a post-graduate research student at Tokyo University studying Japanese architecture for three and a half years. On his arrival in Tokyo he experienced a huge culture shock and his internal question became even stronger. He went into a 'dark night of the soul' that lasted several years. He stayed on in Japan because he was engrossed in an internal dialogue that was provoked by being in that alien culture.

At twenty-eight Premananda still had no idea about spiritual life. While in Japan he met a German architecture professor who introduced him to his first master, Osho, although at the time he had no interest or any idea of the significance of the meeting. Twelve months later, through a series of inexplicable events, he arrived at Osho's ashram in Pune, India. As he walked through the gate, which was called 'the gateless gate', he immediately felt at home.

Suddenly he had found his place. The feeling was emotional, powerful and strong and it was without any reason. It was as if the question he'd had for more than ten years was answered. For the next fifteen years he lived as an Osho sannyasin in India, America and England. Taking part in transformational workshops led to self-awareness and the years of meditation developed a quiet mind.

Two years after Osho's death, Premananda was living contentedly in Pune when he heard about another teacher, the great advaita Master Sri Harilal Poonja, known to his many devotees as Papaji. He read an interview with this man and also saw a video. But the real interest came when he started noticing people who had come back from visiting him. He saw an amazing transformation in these people. There was a glow and internal smile from them that touched him.

Although he had not been looking for another Master, he arrived in Lucknow and was surprised by Papaji's enormous availability Osho had been the Grandmaster, but rather far away. Premanand found Papaji almost shockingly available. Shocking, because hi immediacy confronted him with the question, 'Why am I here? He had to really look and question, 'Who am I?' and 'What am doing here?'

In the first three weeks, Premananda formally sat with Papaji it Satsang each day and three times asked him a question. On the occasion of the third meeting he saw with amazing clarity the thing that, during fifteen or twenty years of spiritual searching, he had never understood. The Self revealed itself and it was seen that this was his True Nature, which had always been known. Without any doubt that meeting marked a total change in his life. Instantly the identification with Premananda and the story of Premanand were completely cut. From one moment to the next there was an enormous shift, which can only be described as an Awakening to the Self.

Premananda stayed on with his Master for five years. He continued to be part of the Sangha (community around a master) without any question arising. He ran the Sangha bookshop and hosted a guesthouse for visitors. Later he understood what a wonderful laboratory the guesthouse had been. Each guest brought an opportunity for him to see the structures of his mind. During this particularly creative period, he painted and exhibited his abstract paintings. He conducted the interviews for his book Papaji Amazing Grace and wrote Poems.