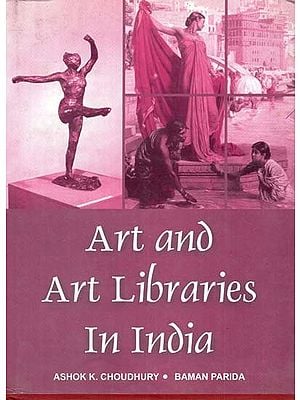 Art and Art Libraries in India (An Old and Rare Book)

Art and Art Libraries in India is an outcome of the author's constant study and research on The role of special libraries in the field of art and culture with special reference to National Academies-Sahitya, Lalit Kula and Sangeet Natak (including National School of Drama-in India. Culture is the way of the human society transmitted from one generation to the next by learning of language and other symbolic media and by experiences. Art enriches man's life, giving him a broader, deeper and more sensitive realization of life. Thus art and culture play a pivotal role in modern Indian society. Today, an all round awareness and programmes for the restoration of artistic and cultural heritage are gaining ground at the national and international level.

In this context, the Art and Art Libraries in India highlights the significance of art and culture and existence of National Academies in India. It also describes the role of special libraries and their network in India, in the area of art and culture. The unique feature of this book is the creation and establishment of a National Documentation and Information Centre in Humanities under the aegis of the ICCR, New Delhi.

Perhaps, the first of its kind, the volume will be equally useful of students, teachers and professionals, organizers of libraries and information centres.

Dr. Ashok K. Choudhury, associated with India's National Academy of Letters, is the first Indian scholar to do doctoral research on the role of National Academies in promoting art, literature and culture. Having brilliant academic records with both Master's degree and Bachelor's degree and securing first position is presently doing his post-doctoral research on the Thematical Varieties of Post-Independent Oriya Literature.

Author of seven books. and more than eighty articles based on erudite research, Dr. Choudhury was invited to join the team of scholars of A Critical Inventory of Ramayan Studies in the World, a joint project of Sahitya Akademi and Union Academic International of Bruxelles, Belgium. Recipient of Banshidhar Acharya Memorial Gold Medal, Dr. Choudhury is also the Visiting Faculty of Aggarwal College, (M.D. University, Rohtak), Ballabhgarh, Haryana.

Dr. Baman Parida has been a senior Faculty Member at P.G. Dept. of Library and Information Science, Utkal University, Orissa, retiring in 2005. A post-graduate in Public Admn., and M. Lib. Inf. Sc., and Ph. D. in Lib. & Inf. Sc., he has contributed and presented a number of papers at national level conferencesjournals of library and information science and technology. He has edited and published three books in English and one textbook in Oriya. He has also compiled a glossary in Library & Information Science (Oriya-English) published by Orissa Text Book Bureau. Under his able guidance three sholars has already been awarded Ph. D. in Library Science from Utkal University.

Dr. Parida is a member of several professional societiesassociations and cultural organizations of India. He has organized ILA, IATLIS, SIS, and CALIBER as joint organizing and organizing secretary of these national level conferences and seminars. Formerly General Secretary of Utkal Library Association, Orissa, presently he is a council member of ILA.

This book is an outcome of sincere study and investigation into .the over-all activities of National Academies of Indian art and culture in general, and growth and development of their libraries in particular. India, one of the most ancient countries of the world, has long been significant in global affairs. It is one of the main centres of civilization which has produced a rich and varied as well as distinctive culture, that has eventually made a remarkable contribution to world heritage. Culture is nothing but the artistic and social pursuits, expressions and tastes valued by a society or class. In other words, it is the enlightened or refined understanding of the arts and other human intellectual achievements. Therefore, it is clear that art and culture are interrelated terms. Art plays a pivotal role in a society. It is one of humankind's glorious achievements. It is the expression of aesthetic idea or purposes by the use of skill and imagination in the creation of objects, environments, or experience that can be shared with others. Art is ever present, essential and an universal language which the people of all nations can understand.

It is in the sphere of art more than in any other sphere of life that the spiritual quality of each nation finds its most characterstic expression and it is through the medium of national art that each nation has made its distinctive contribution to human culture. It has been noted that the most dominant characterstic of Indian art and culture is to create spirituality. Our artisans and craftsmen cultivated a spiritual milieu in order to in still their work with its essences. At present, we notice in Indian art, a unique blend of Hindu, Muslim and Christian art in all its manifestations such as architecture, music, dance, painting, craft etc.

Art embodies and transcends both its creators and its time to reveal the enduring truth about the human condition. The more we understand art, the more we understand ourself. However, there appears to be a growing concern about the disappearance of much traditional knowledge and the cultural heritage in many parts of the world by the introduction of modern science and technology. Therefore, an allround awareness and programmes for the restoration of artisic and cultural heritage are, today, gaining ground at the national as well as international level. The socio-technical and intellectual process was first taken out by the museums, galleries, archives and other related cultural centres. But with the advent of special libraries which came into being in response to intellectual demand and pursuit of knowing the unknown, it would now be disastrous to assume that they are merely the preservers of the cultural remains of humanity. The basic function of these special libraries has been the socialization of reading materials by adopting latest technology for the study and research for the benefit of the whole mankind, which is discussed in this book.

In India there are hundreds of such art libraries, alongwith museums, archives and other cultural forums that are playing an important role to increase public understanding and appreciation of Indian art and culture, through restoration, preservation, research, documentation, and classification of our history, art and culture. However, it is not possible to present an elaborate description and details of the aims and functions of all art libraries, the focus has been given on the libraries of the three prominent National Academies.

To preserve our past artistic achievements as well as for the furtherance of contemporary art forms and their varied experimentation, since independence, the Union Government has established numerous national information centres in the field of art and culture, especially three prominent agencies, i.e., National Academy of Music, Dance and Drama (SNA), National Academy of Letters (SA), National Academy of Fine Arts (LKA) which is augmented in this work. The National Academies engage in creating artistic consciousness among Indian masses through its multifarous cultural activities. Above all because of their global outlook the Academies have shouldered the responsibilities of popularising and promoting our traditional and modern cultural heritage worldwide.

The Academies have their own libraries of national focal point which are the hub of our cultural legacy. The SA library is a multilingual library of books in twenty-four Indian languages recognized by it, with of course distinct subjects specialization in literature. Nevertheless, it covers the entire gamut of Indian religion, philosophy, literature, history, art and culture. In the field of performing art, SNA accord with priority to the building up of its archive, museum, and library with a view to ensuring preservation of various art forms and also with a view to disseminate its rich collection for research and study. Its library has a sensible collection of books on performing art and allied subjects covering music, dance, drama, theatre, sociology, folklore, tribal studies, history, religion, and culture. LKA is the apex cultural body in the field of visual arts in India. It maintains a library covering world art and collecting immensely valuable materials in visual arts and artefacts for preservation and research purpose. These three institutions are pioneers in the field of documentation and preservation process of Indian traditional and classical art and culture.