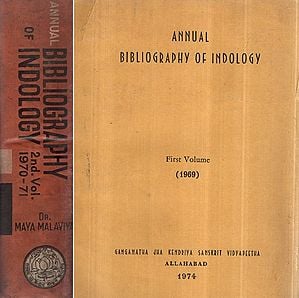 Fully insured
Preface
Vol-I
The utility and necessity of a bibliography for research scholars cannot be over-emphasised. When the work of preparing the Annual Bibliography of Indology (ABI) for the year 1969 was taken up, there was no such work in the field exclusively devoted to Indology which would inform the research scholars about the current studies being done on the subject in order to avoid the wastage of nati mal labour, money and time. Vedic bibliographies continuedly published by Professor L. Renou and Professor R. N. Dandekar were limited to Vedic studies only. Pract-gyoti of Kurukshetra University served the purpose of the research scholars we'l but its approach was selective. Its publication also ceased after some issues (though it has recently been started again) In view of this lack of an Indological research tool, the Ganganatha Jha Research Institute (now Ganganatha Jha Kendriya Sanskrit Vidyapeetha) planned for the publication of AEI. In doing so it was only translating into action the wish of late Mm. Dr. Umesh Mishra, former Secretary of the Institute. Circumstances beyond our control much delayed the publication of this work. Since the libraries of Allahabad were not rich in research periodicals we mainly had to depend upon the libraries of Benaras Hindu University and Varanaseya Sanskrit Vishwavidyalaya, Varanasi. Unfortunately, libraries at more distant places could not be consul-ted. The annotation of each and every entry was originally planned to be given but time and resources forbade us from doing so and only the important entries could be commented upon. Now the first volume of ABI is before the scholars. Within our limitations, all efforts have been made to make it as comprehensive as possible. Despite its deficiency if it proves a bit helpful to the scholars in their studies, I shall deem myself amply rewarded.

The present volume covers only those books and articles, reviews, notes etc. in Indian and foreign periodicals on Indological subjects which were either published or were deemed to have been published during 1969. As many as 253 periodicals have been fully scanned. The entries are classified subject-wise into twenty-four sections and arranged author wise in alphabetical order. A list of periodicals which have been referred to and indexes have been duly included.

The next volume of ABI for 1970-71 is nearing completion and will be out soon. In this connection, the suggestions from scholars all over the world are invited to make the work still more comprehensive and useful in its future issues. They are further requested to inform the Vidyapeeth of their contributions concerning Indology to be included in the future volumes.

I am thankful to Dr. B.N. Mishra, Librarian of this Vidyapeetha, for his valuable suggestions and advice liberally extended to me during the course of the publication of this work. Thanks are due to Dr. Kishore Nath Jha who helped me in arranging some index cards alphabetically.

I must express my gratitude to Dr. Jayakanta Mishra, Dr. Aryendra Sharma, Shri Shastri, Dr. M.D. Balasubrahmanyam and Dr. Mandan Mishra, without whose inspiration, guidance and help this work would have never s en the light of day.

Vol-II
We are releasing now the second Volume of the Annual Bibliography of Indology. The first Volume was published in 1974. The enthusiasm with which it was received by the scholars is a justification in itself for the continuation of this project.

Due to certain unavoidable reasons the publication of this work has been delayed but this delay has been made up by incorporating together entries for two years, i. e. 1970 and 1971 in this Volume. We are trying in right earnest to make this bibliography uptodate, so that the readers are kept informed of the current studies going on on different topics of Indological Studies.

This Volume of bibliography is being published as a supplement to our journal and will be made available to our contributors on demand. It is hoped, this Volume also will be received with the same enthusiasm and warmth with which the first one was received.

Co-operation of the scholars in the form cf intimations regarding their current and uptodate work along with the place of their publication etc. will be received with pleasure and thanks.

Dr. (Smt.) Maya Malaviya deserves our full appreciation and thanks, who with all her earnestness, hard labour, enthusiasm and meticulous care has compiled this work and also seen it through the press. Shri A. T. Pingle also deserves mention for the assistance he has rendered in the process of compilation.

Foreword
Vol-I
Indic studies are now the equal concern of Indian and Western scholars. The rapid emergence of research in Indological subjects is reflected in quantum of Indological literature published in the form of books, research articles and proceedings of learned societies. So great is the mass or this published material that even specialist scholars cannot keep themselves abrest of the contributions on their particular topic of interest. Furthermore, whatever time and energy of a research scholar is forced to waste in search of this material can be better utilised in his own research work. It is after a long time that we have realized the importance of bibliographical compilation and consequently there have been partial attempt in indexing Indological literature in Kern Bibliography, Praci-Jyoti, Orientalische Bibliographie (now ceased) and Luzac's Oriental list etc But a comprehensive bibliography of Indology has been a long desideratum, towards which the present bibliography of Indology is our humble attempt. This is the beginning of the project as visualized and contemplated by Late Mm. Dr. Umesh Mishra, former Secretary of the erstwhile G. N. Jha Research Institute (now G. N. Jha Kendriya Sanskrit Vidyapeetha).

When this Project was undertaken nobody had the practical idea of the various types of difficulties which one was destined to face. The main object of the Annual Bibliography of Indology is to collect and classify published meterials pertaining to all Indological topics and thereby provide a convenient medium of reference for all those interested in further studies and research on any aspect of this particular subject. It is a privilege to introduce the first issue of the Annual Bibliography of Indology, for the year 1969, to the world of scholars in general and Indologists in particular. Many important articles, monographs and proceedings of learned societies have been published in out-of-the way places and it is difficult to locate them even in good libraries. The entries listed in the bibliography have been culled from a great variety of sources, most of which have been personally examined by the compiler as far as possible. In other cases she had to rely on the standard library catalogues, book reviews and other relevant subject bibliographies published so far.

It may not be as complete as one would have liked it to be, but even then it will render the work of Indologists more easily accessible. I am happy to record M/s Allahabad Block Works in producing the bibliography neatly. Finally, we crave the indulgence of scholars for their suggestions and comments in making this bibliography more usable and complete in its future issues.

Vol-II
G. N. Jha Vidyapeetha took up the project of publishing the Annual Bibliography of Indology in the year 1970. The first Volume comprising entries for the year 1969 appeared in 1974. And now the second Volume comprising entries for 1970 and 1971 is ready in comparatively shorter period. I may hope that the project will be made uptodate in coming years.

Dr. Harihar Jha, the Acting Principal has helped in bringing out this Volume of Bibliography for which he deserves our full appreciation and thanks. I also thank Dr. (Smt.) Maya Malaviya for the pains she has taken in planning and compiling the work and seeing it through the press. 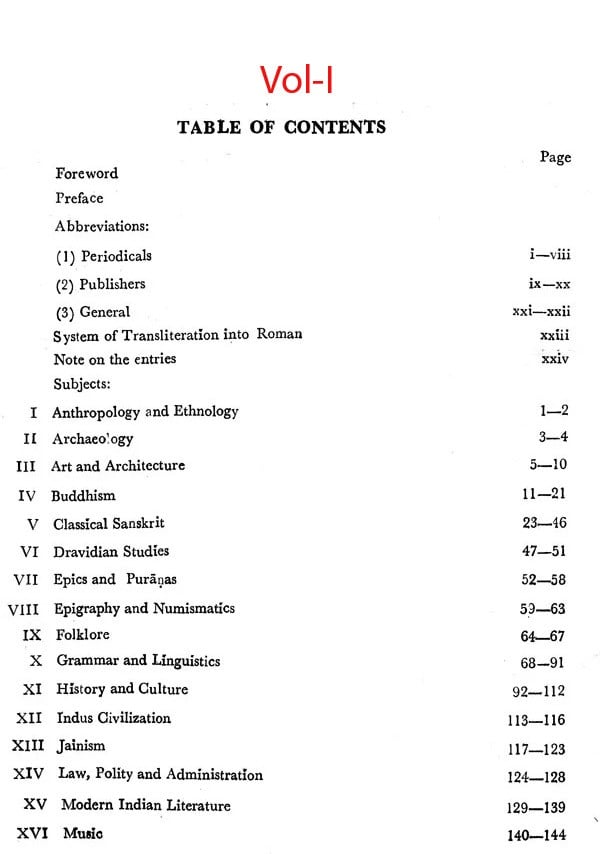 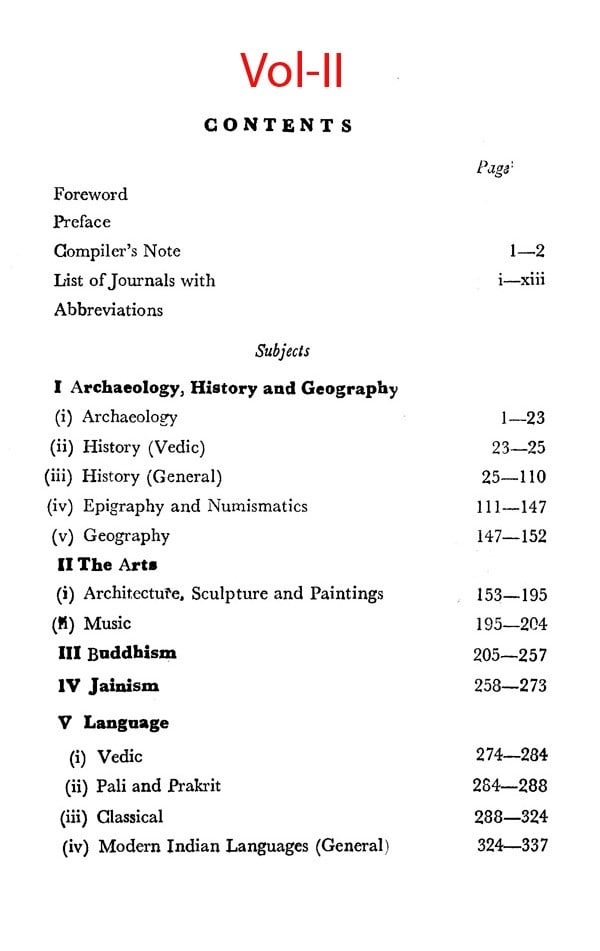 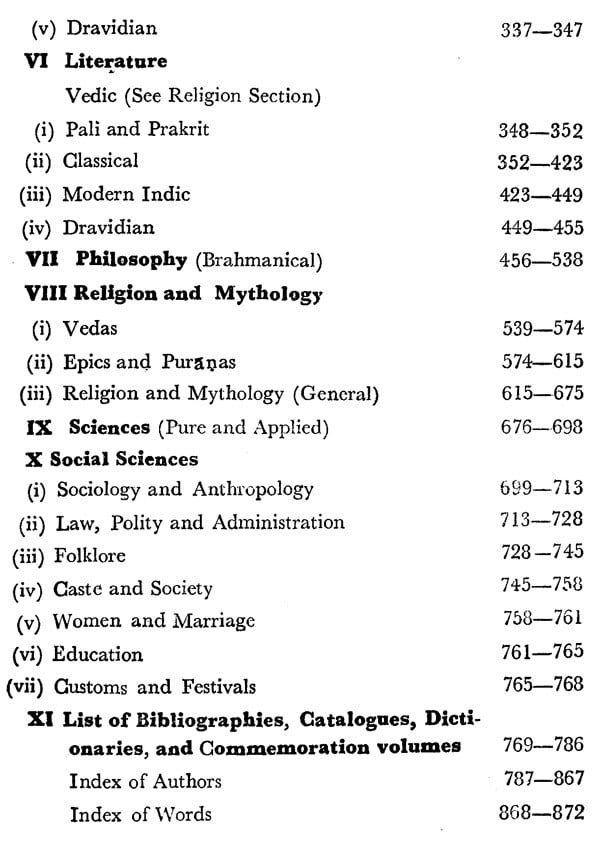 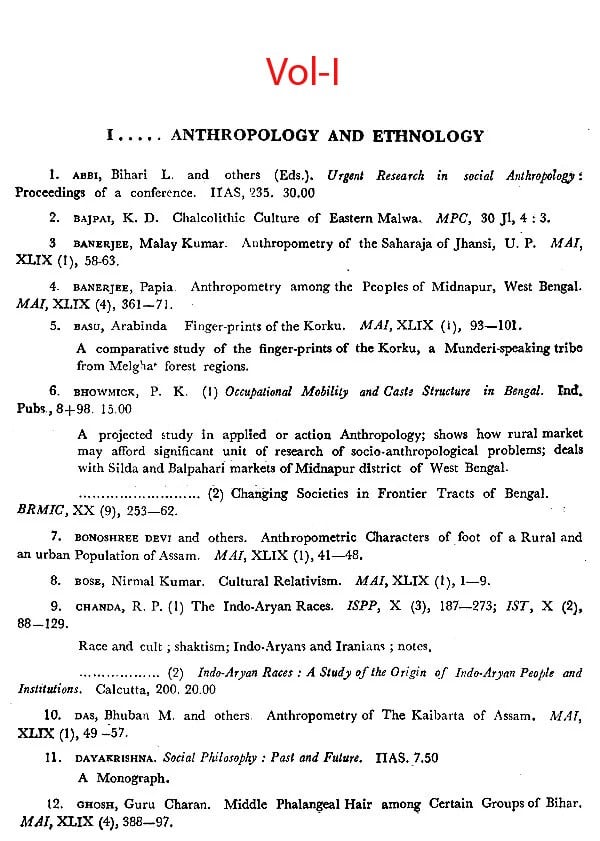 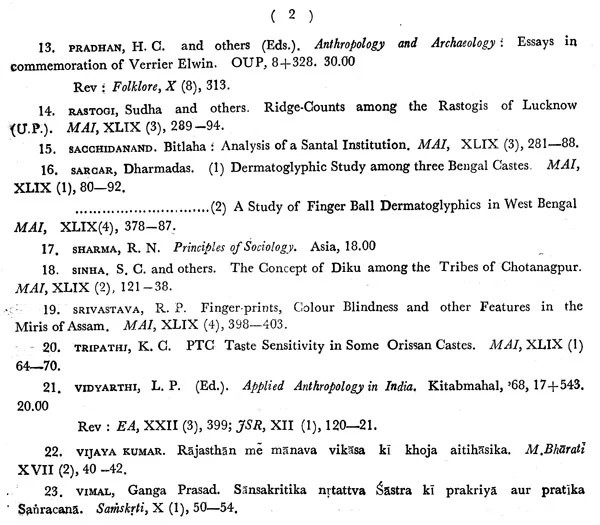 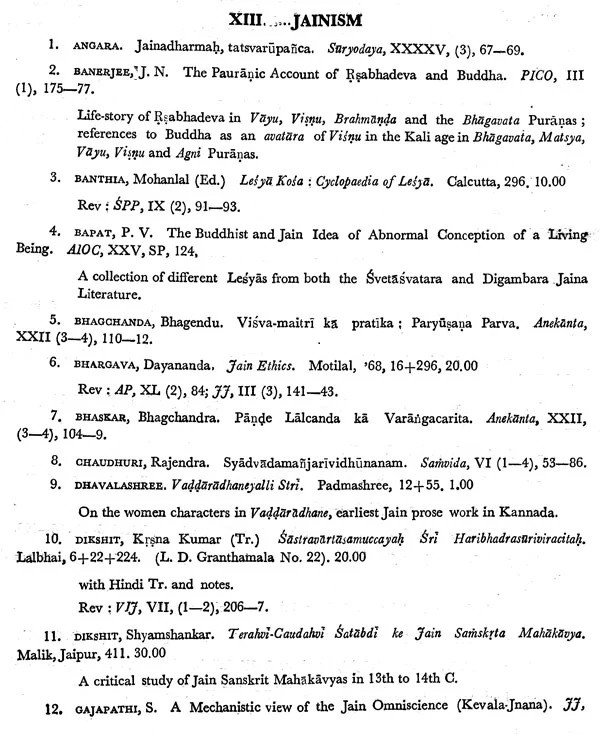 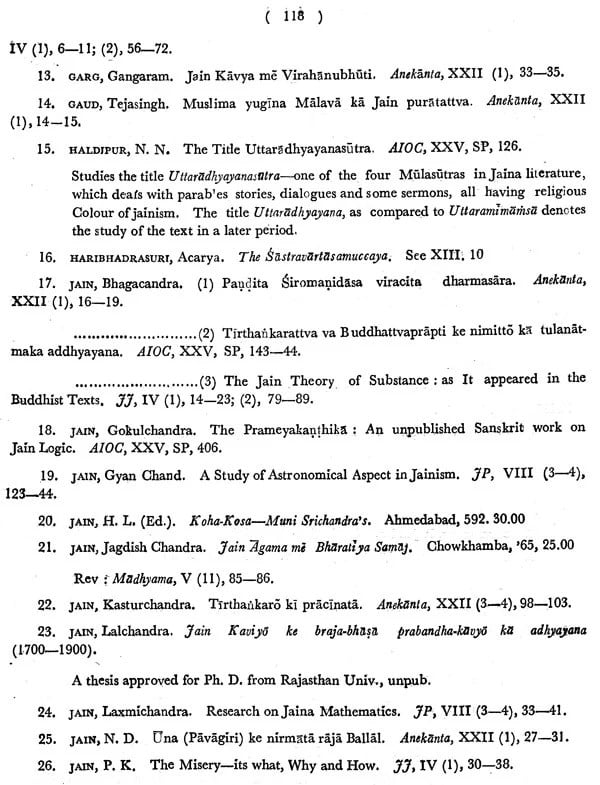 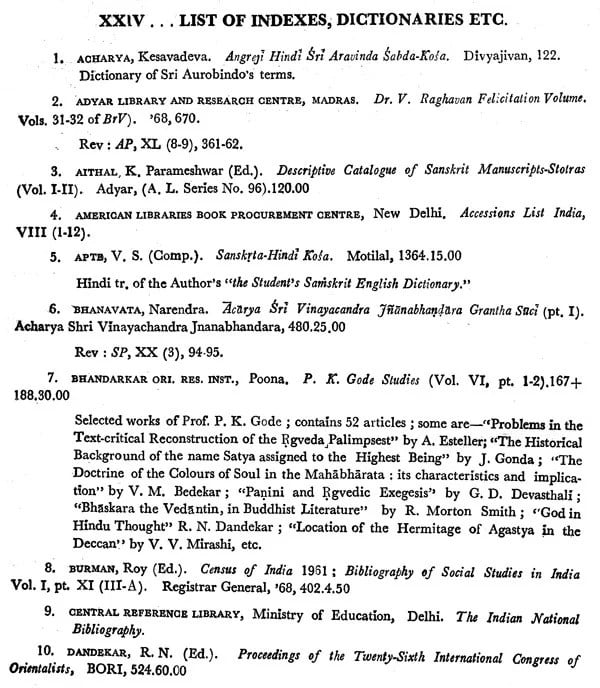 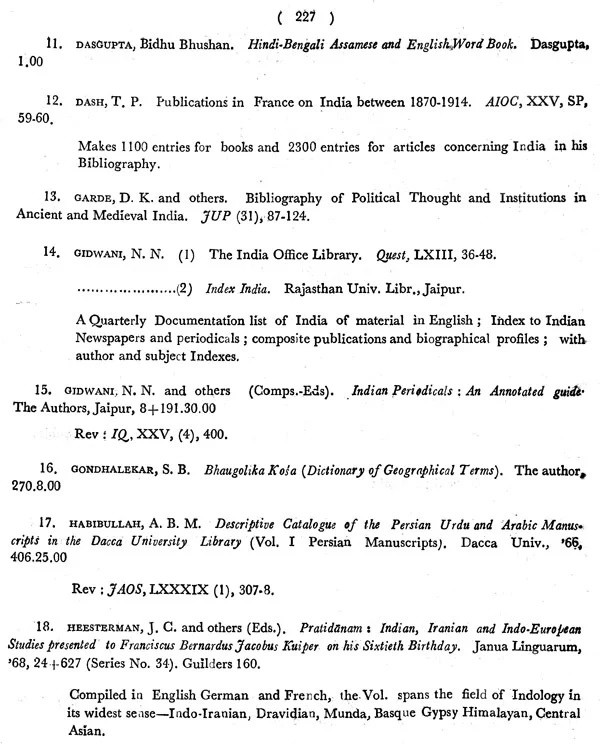 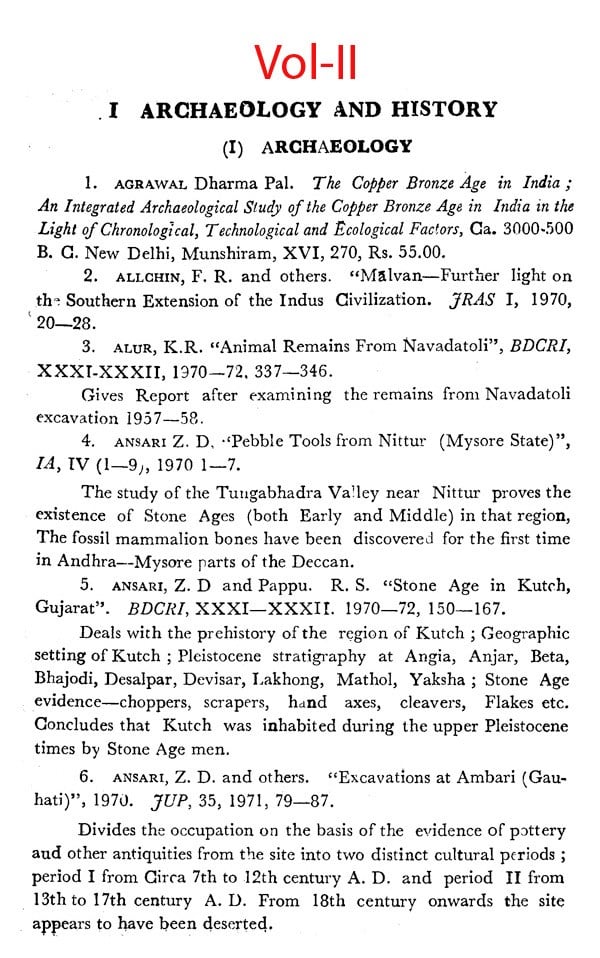 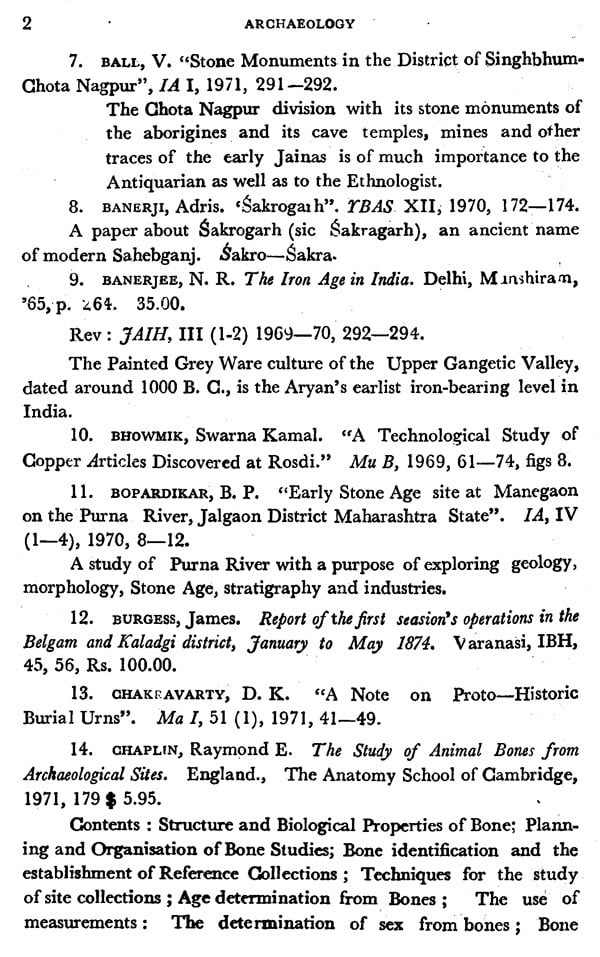 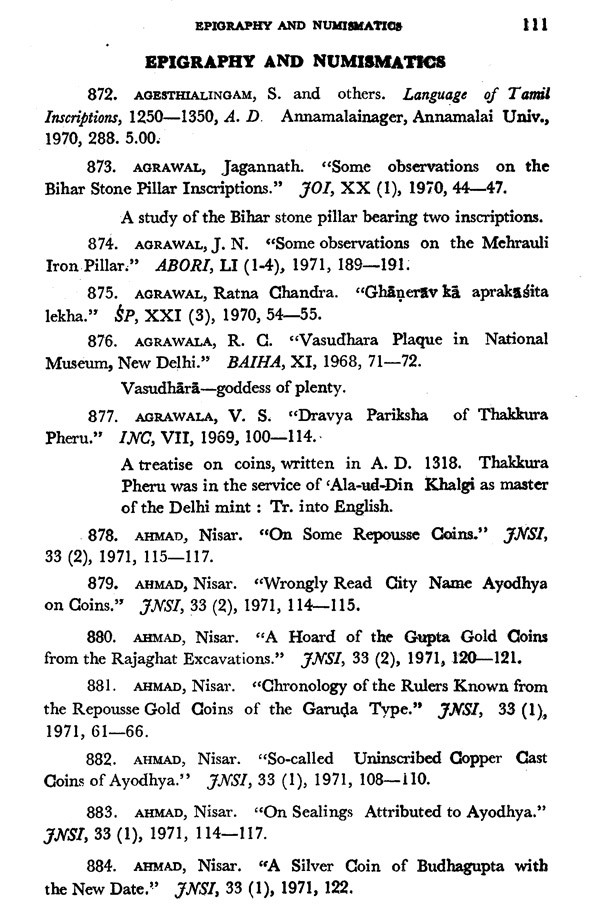 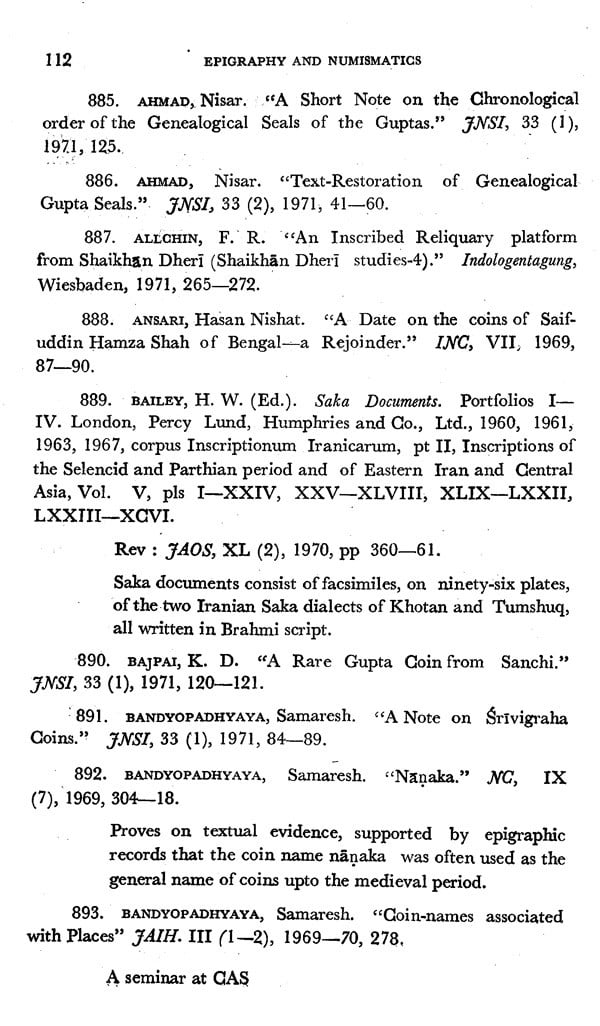 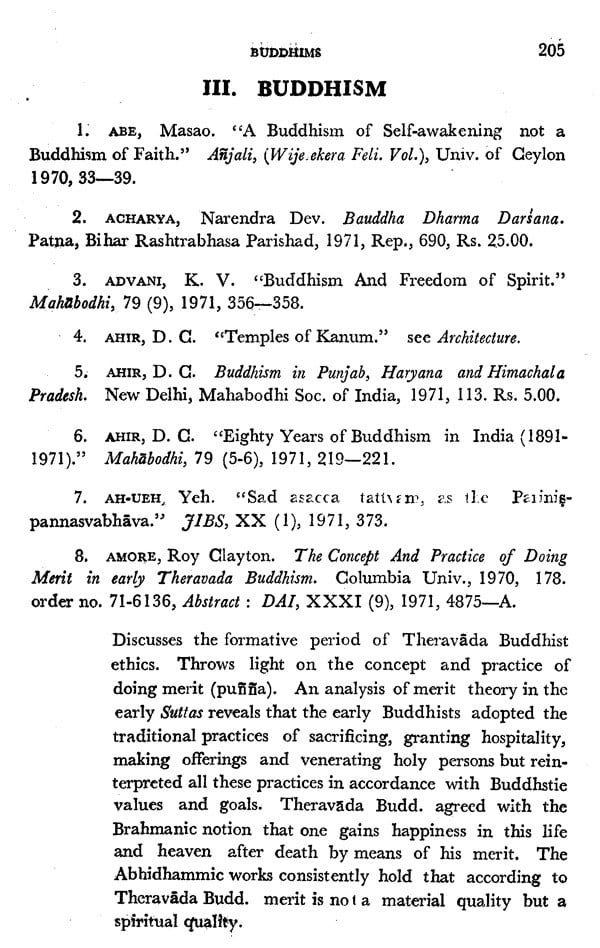 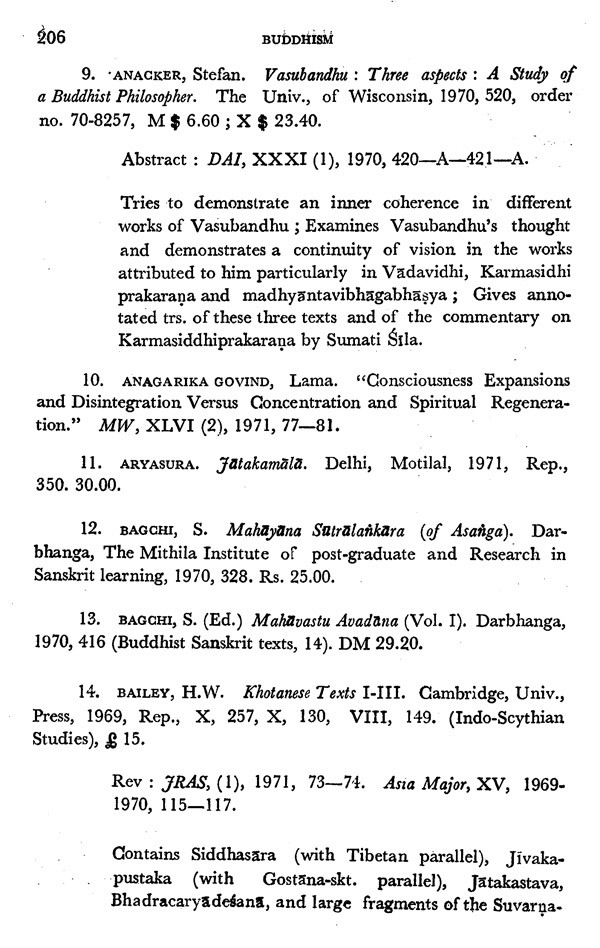 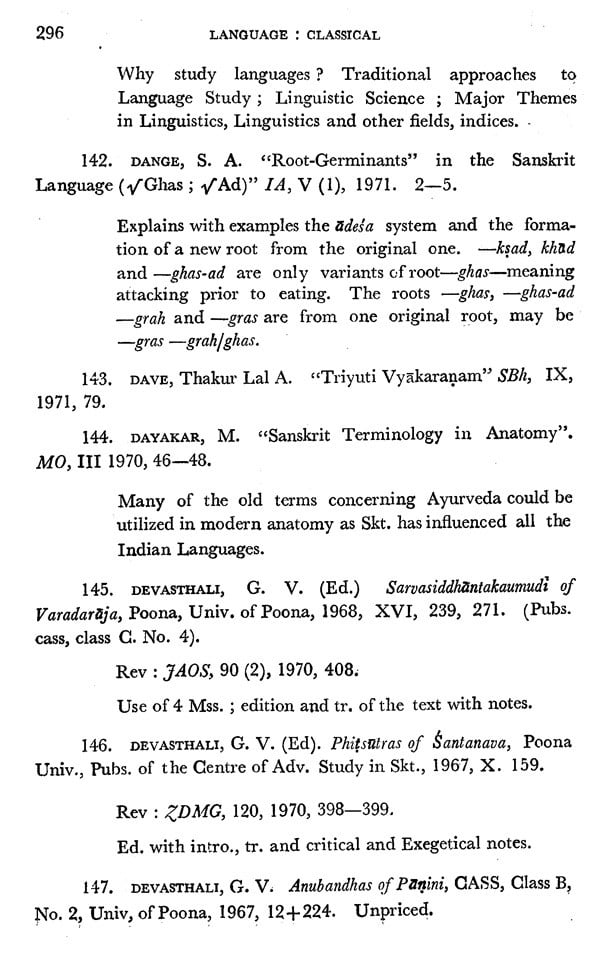 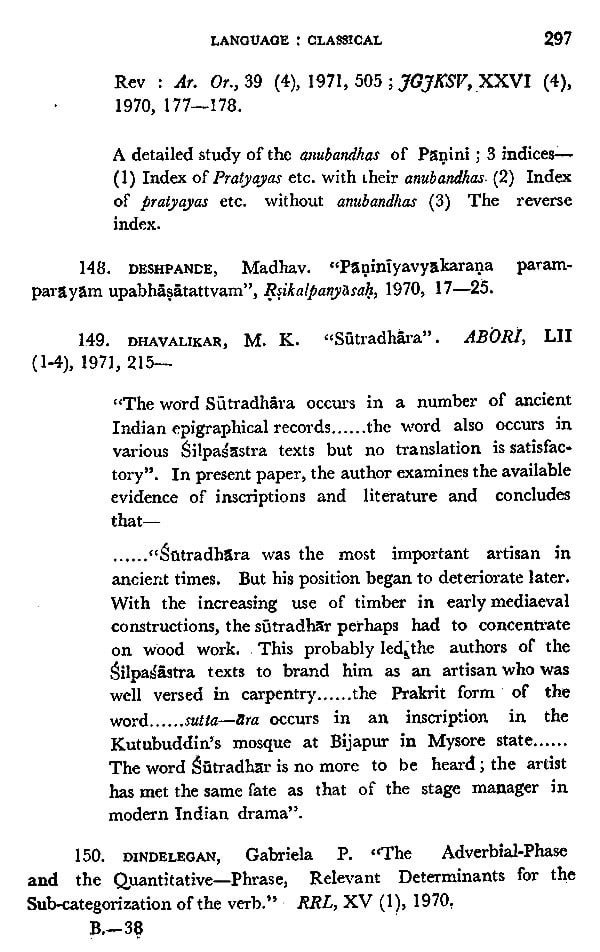 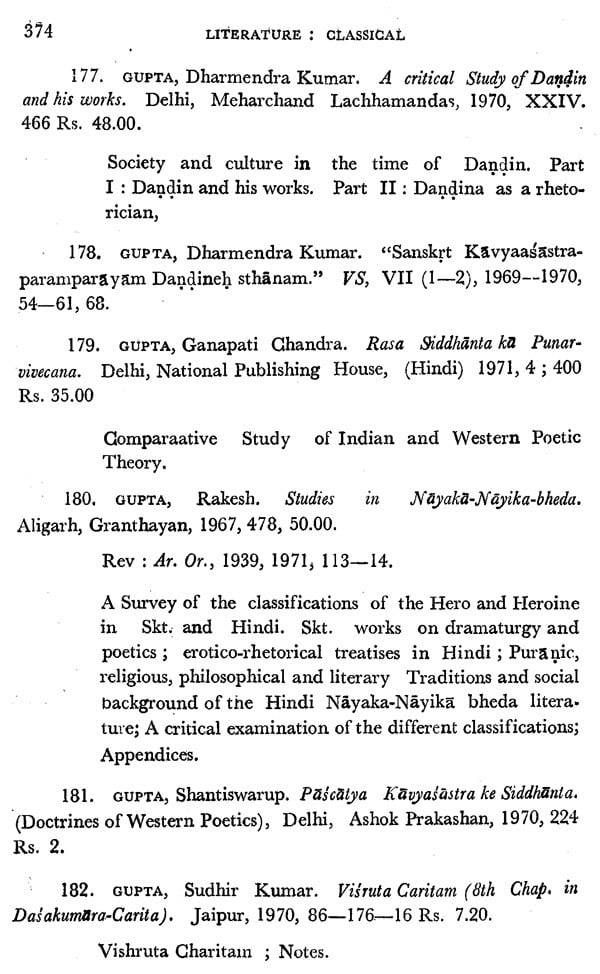 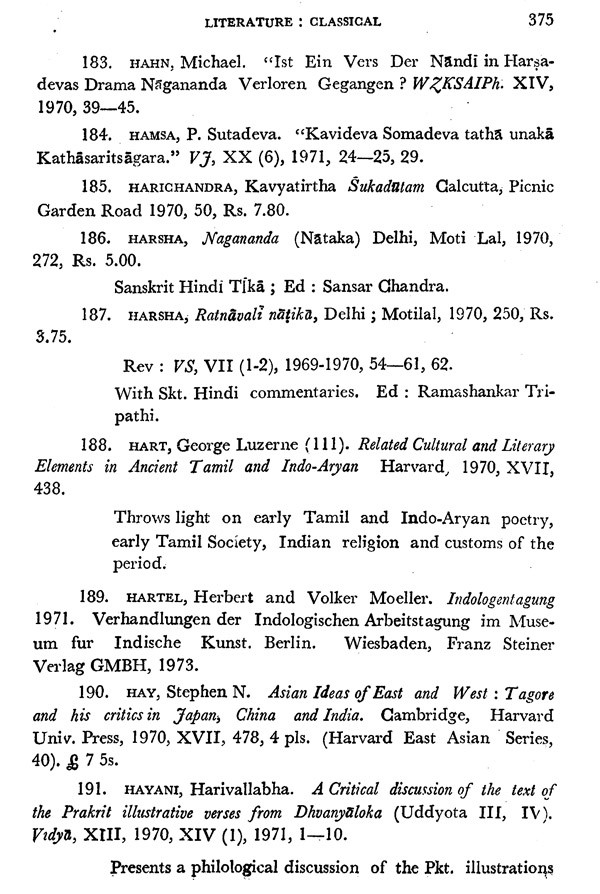 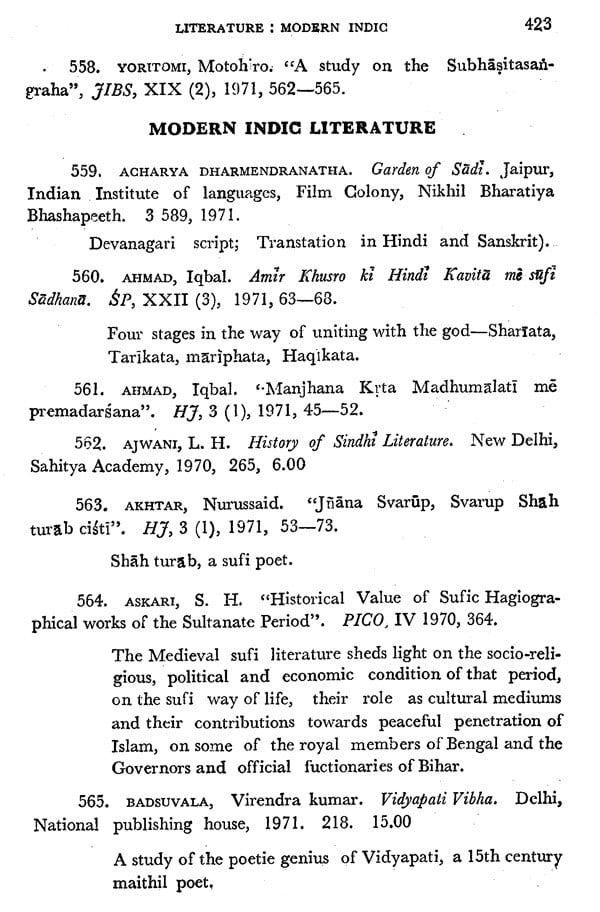 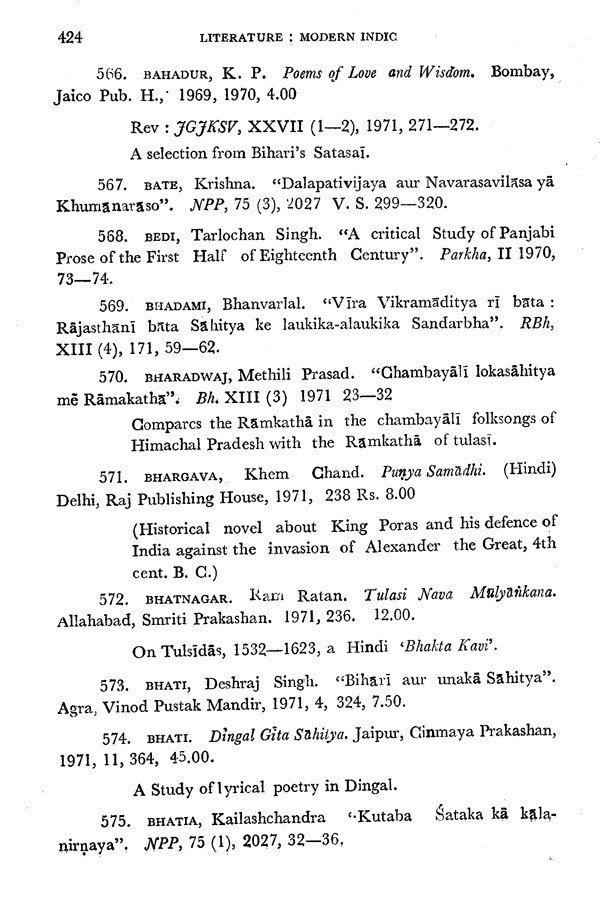 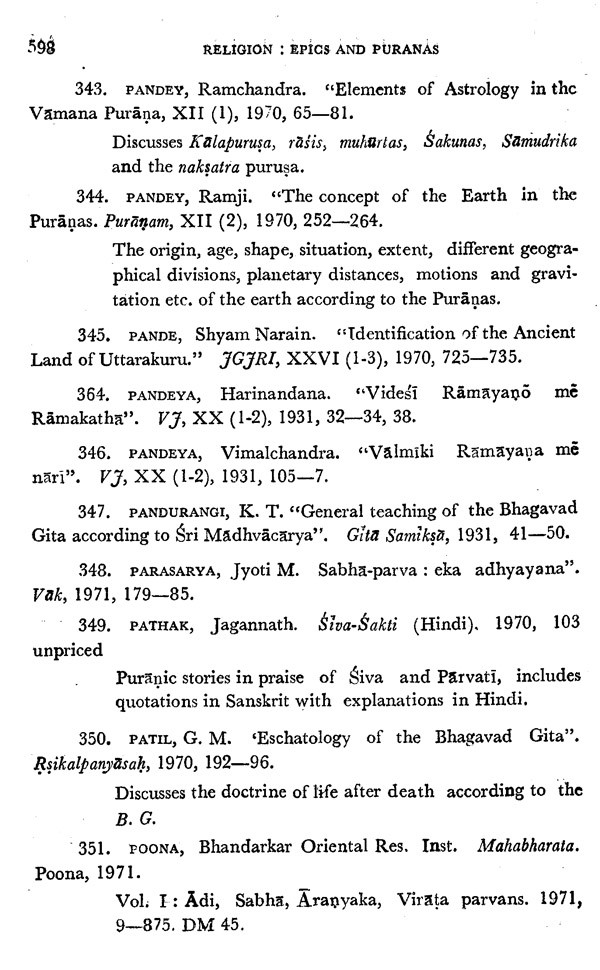 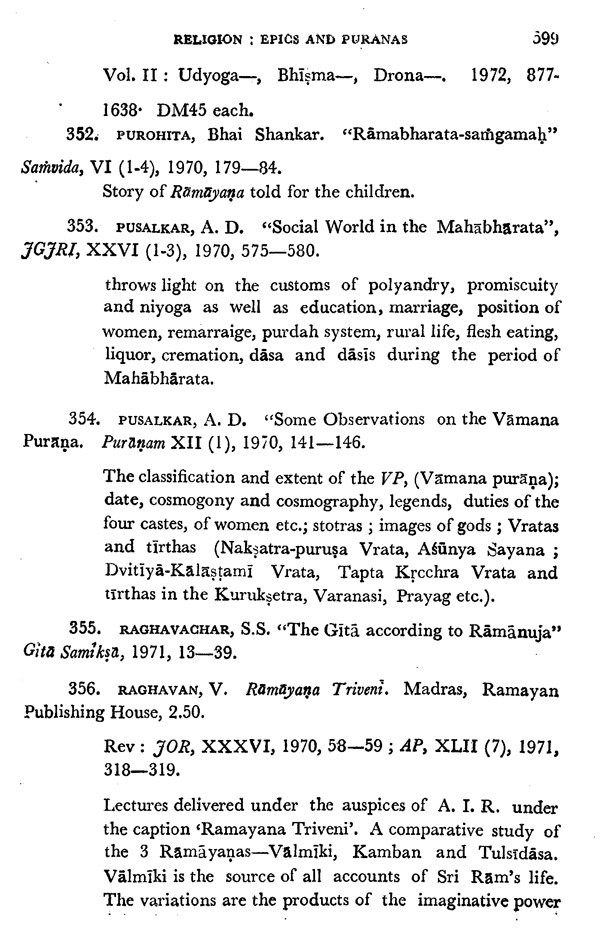