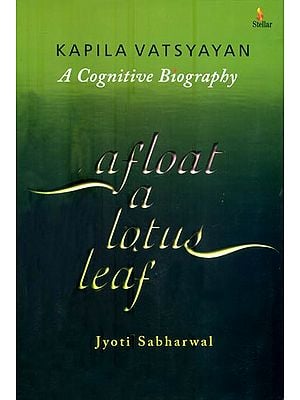 A life beyond categories! Perhaps, that's the quintessence of Dr Kapila Vatsyayan's trajectory, both as a sensitive artist and profound scholar. She has not only questioned, but also defied the mindsets that create those categories, with her multidisciplinary approach. Given her proximity to the stalwarts of the intellectual and cultural arena, i.e. Aruna Asaf Ali, Kamaladevi Chattopadhyay, Rukmini Devi Arundale, Dr Grace Louise McCann Morley, and many more, she imbibed the finer nuances of feminine discourse of these strident pioneers, who crossed the social barriers and altered the gender perceptions.

In blissful formative years, Nobel Laureate Gurudev Rabindranath Tagore made her recite poetry, and legendary Nandalal Bose taught her to hold the painting brush at Santiniketan. She belongs to the generation that nurtured the ideals of a free India, to rediscover its cultural roots and reconstruct the broken tradition. And she devoted her boundless energy towards that lofty goal working closely with Pt Jawaharlal Nehru, Maulana Abul Kalam Azad and Dr S Radhakrishnan.

The original cultural czarina of India, she laid the foundation of 'soft diplomacy' in the post-Independence era, signing numerous cultural treaties across the world and formulating bilateral exchange programmes. Building institutions, she delineated education and cultural policies with her gifted tenacity, exemplary erudition, and critical faculty. Arguably, a great living authority on the arts of India, and a key administrator in the fields of archaeology, anthropology, archives, museums, et al, her multifaceted expertise has facilitated several bridges of communication, especially between the Indian and the Western arts.

Dr Vatsyayan has both witnessed and participated in the agony and ecstasy of the cultural history of India, seeking the inner core of its creative genius in all the vibrant hues. Though there may have been an inevitable clash between the innocent idealism of a bygone era and rueful reality of the contemporary saga, it's been a journey worth emulating. More so, for the young aspirants of a post-modern India, this tome is a 'must read'.

WE ARE FACING THE great Himalayas with infinite ranges of mountains in Mukteshwar. Each hillside opens to another, the next into the next. And Dr Kapila Vatsyayan sees those peaks as a prime essential with light and shade playing hide and seek: "Just as mist and sunshine obscure and reveal, so also in life are the moments of obscurity and revelation! Climbing hills and gliding down the valleys, moments of challenge and achievement, doubt and faith, indecision and decision, hectic activity and lonesome silences, each temporal moment is the container of many moments of time. Well, what is this exploration of the self? It is difficult to gauge, also sometimes, it seems meaningless.”

As she ruminates during one of her extensive interview sessions, I marvel at her phenomenal memory for names and dates, and amazing recall for such intricate details of a bygone era that it defies time and space. While wondering about her faculty for historical facts, and her ability to hold forth on interconnectedness of civilizations around the world, the answer is not hard to seek. She's no armchair critic and historian, who culled her data from the rusty-dusty archives. Her scholarship is not sustained merely by the cut and dry dissertations that emanate from an impressive array of bibliography and multiple sources. She has breathed knowledge; she has been a firsthand witness to the turbulent history of pre-and post-independent India; she has dug deep into the soil and put Indian culture on the global map, signing scores of treaties when 'soft diplomacy' was still seeking its genesis, and Bharat was stuck with the cliched images of sadhus and snake charmers.

This is a generation that worked with exemplary dedication, but accomplished everything in anonymity, remaining detached in terms of glorifying the self. Work was their message and media was kept out of bounds. The year was 1989. As a journalist, one had the fetish for bagging exclusives and dispelling the silence of some eminent achievers. At that point in time, Dr Vatsyayan was Academic Director of the Indira Gandhi National Centre for the Arts. One gathered she was a tough call, and it would be quite a task to break the ice, and get her on record. With some trepidation, I made contact and she did take the call, reacting as anticipated, "I don't give interviews. Period !"

And then softened the blow with a sweet aside, "I like your voice, come and have coffee with me."

She posed a challenge. I picked up the gauntlet and charmed her to open up, and share the precious nuggets of her erudite mind, that has assiduously researched the realm of aesthetics, and delineated educational and cultural policies.

But my most curious poser at the outset was, "Why have you been so averse to interacting with the media?"

She faced the volley head-on: "I have just done my work. The question of being either closed or open arises, if you have taken any kind of position. I have not taken any position vis-a-vis the media. I write, I speak, I participate in seminars and conferences. Now, that is my method of communication. I am interacting with numerous people of varied disciplines from all parts of the world. That is not exactly being closed. Is it? For me, encounters or dialogues at these diverse levels have been such an enriching experience, because it has taught me that the life of reflection and the life of action have to be balanced. And within that lies the life of your own intellectual curiosity, probing, exploration and investigation. One has to be so grateful for all these opportunities that came fortuitously."

For someone, who left Michigan University to return to the Indian learning, and travelled to Banaras to immerse herself in the study of archaeology, architecture, history, and literature, she has established several bridges of communication between the Indian and the Western arts. Promoting the study of India's several traditions of the literary, visual and performing arts, she perceived culture as a search for national identity, but strongly discounted the percolation down theory.

A dancer by training, she's known to have broken the barriers that seemed to segregate disciplines, and comprehended the complexities of politics, art and religion, translating them into a comprehensive philosophy in litany of her books. Also, as an administrator and advisor to the Government of India, she has questioned the validity of specific categories, and the mind-sets that define such categories. For, she has studied the interrelation and interdependence of varied facets of the artistic traditions with remarkable tenacity.

Privileged to have worked with the visionaries of India, she has been a facilitator in setting-up some of the leading institutions, besides her six-decade involvement with UNESCO. And amidst laurels galore, controversy has inevitably been her constant companion. But she stood her integral ground with an intrinsic belief: "An institution is successful when its founder can walk out and drop dead. You have to distance yourself from the very creation to ensure continuity. That's what the Gita is all about — create your work but don't get attached. Allow its organic life to grow from within."

And she draws a very interesting analogy: "Perhaps, I am a rolling stone that has gathered much moss. Indeed, so much moss that there is no stone left; only layers and layers of this rich and vast moss of the knowledge and experience of the country of my birth, and those other countries from whom I have imbibed and received. The memories of these eight decades of a physical life are the decades, which have been responsible for pouring in with generosity the history of diverse civilizations and cultures through the instrumentality of human beings. All that I know is that my memories are the memories of my shapers and makers, of those who sometimes in their ordinariness were extraordinary. At other times, they were extraordinary, and I the ordinary recipient."

Everybody lives many lives in one life. So has Dr Vatsyayan, as she reflects: "No one moves from alpha to omega in a straight line. One holds multiple identities within oneself. Sometimes, there is intro-spection or talking to the self, and the predicament is, whether you allow yourself to move in terms of all the externals that you've to grapple with and be in that flotsam in time; or else you make choices. There's been a flurry of both acknowledgement and fierce criticism in equal measure. In the playground of life, this is normal. The litmus test is how not to lose equanimity in any given situation. Ultimately, it is the accountability to the self. And for this, one is truly beholden to the sanskar that were gifted."

With no dearth of detractors, she has deflected all the darts over these decades with dignified silence, for, as she states, "We all tend to look inwards. The only awareness is of ignorance as of one's smallness. There was this great Guru Meenakshisundaram Pillai in Pandanallur, in Tanjore district, and I used to visit him. Being young and curious, I would ask him endless questions about Bharatanatyam, ragas, and composers. And one fine morning, he said, 'You know, you're very sincere. You want to learn. You watch carefully. But you ask me too many intellectual questions. Let me tell you, I am sitting near the sea. When I'm on the beaches of this sea, I watch these tides. And one day, a big tide drenches and soaks me. There is something about the tradition. No amount of your questioning would answer the questions you ask. Come and be with me for ten years. Then one day from that tide, maybe you'll get one drop. That one drop would also be very precious. So stop asking questions. Just be there, go through this with the sadhana of watching a sea or ocean, and wait for that moment of benediction, as those tides envelop you.' These words stayed in my consciousness. No matter how much wisdom you derive from books, it is life that teaches you."

One had to wage a battle of wits, getting the original cultural czarina of India to document her valuable cognitive trajectory. I kept proposing and she kept disposing, remained evasive and elusive with gentle snubs: "There never has been any propelling desire for presentation of the persona." 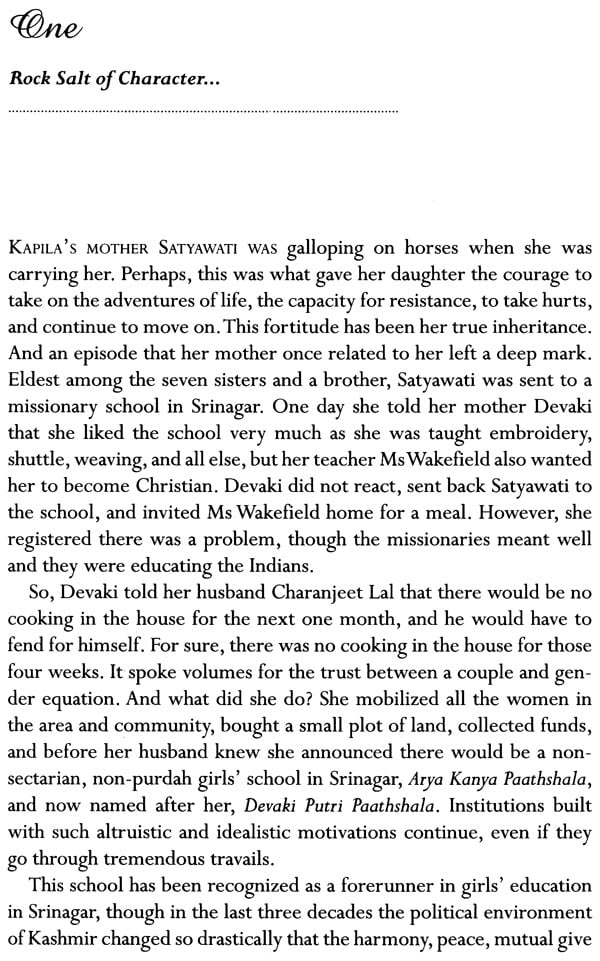 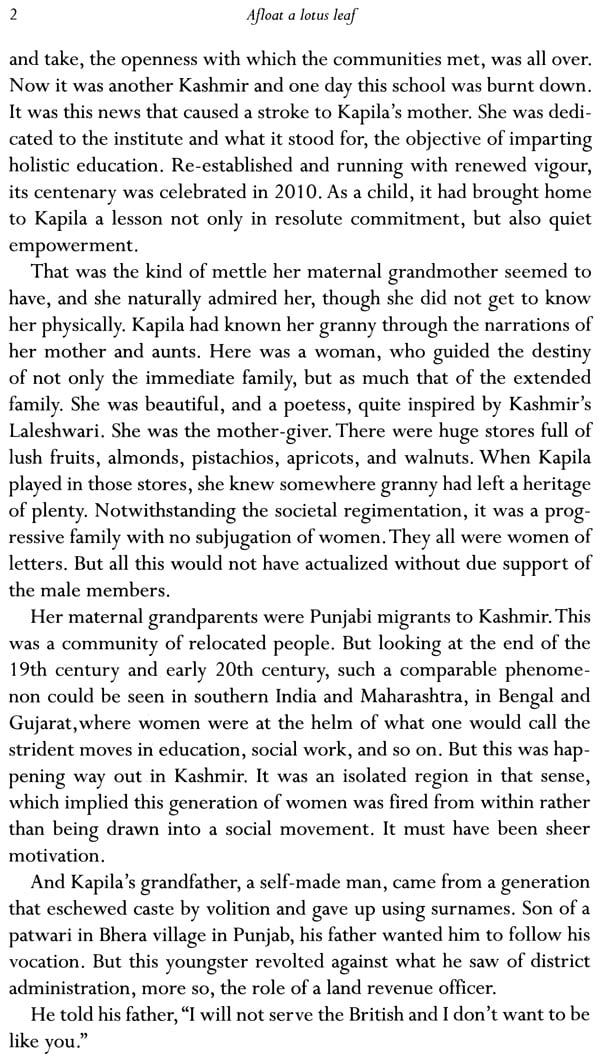 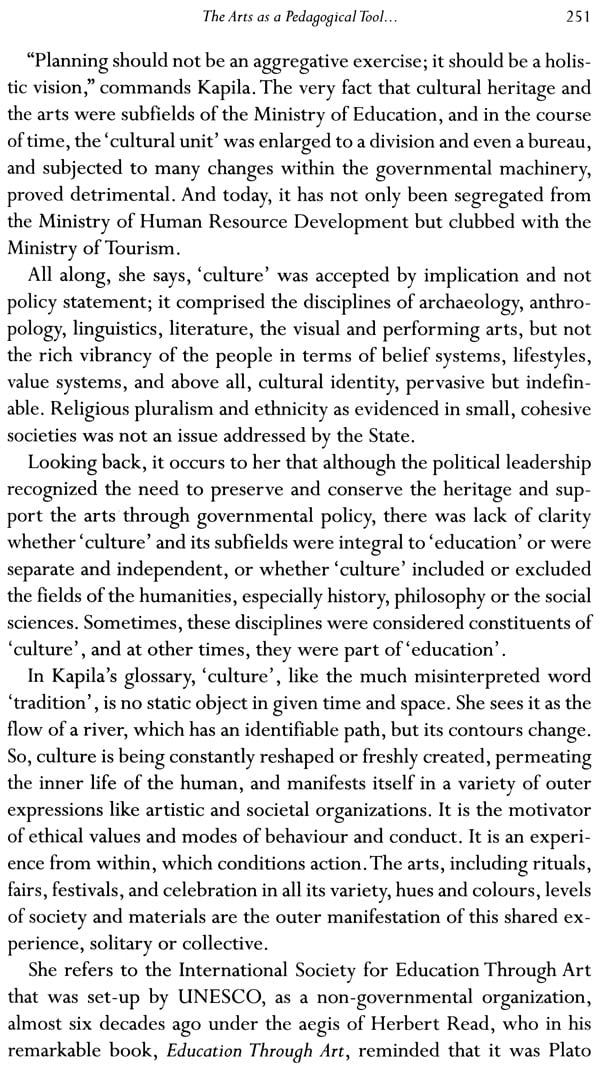 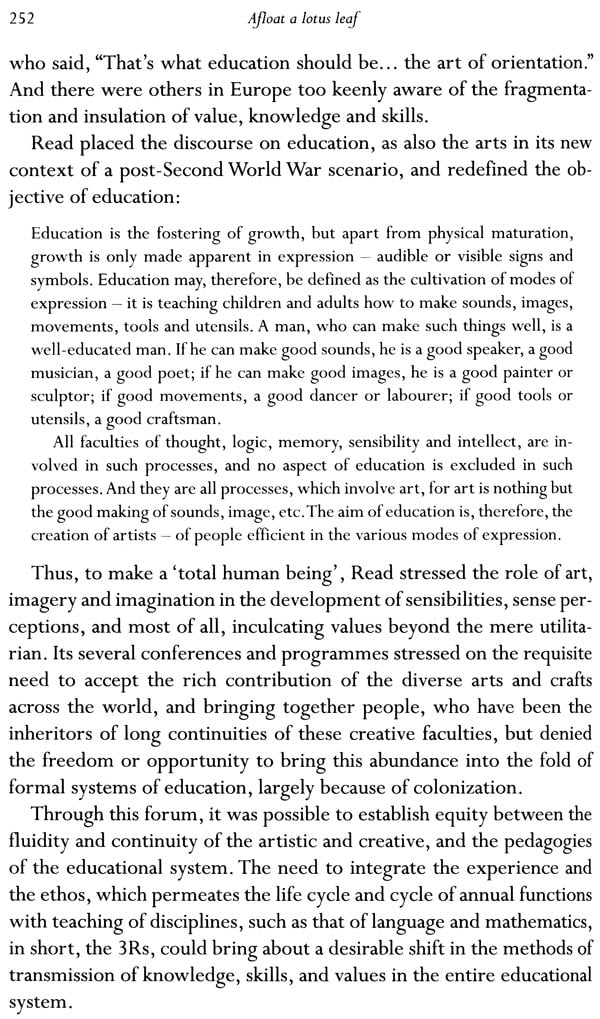 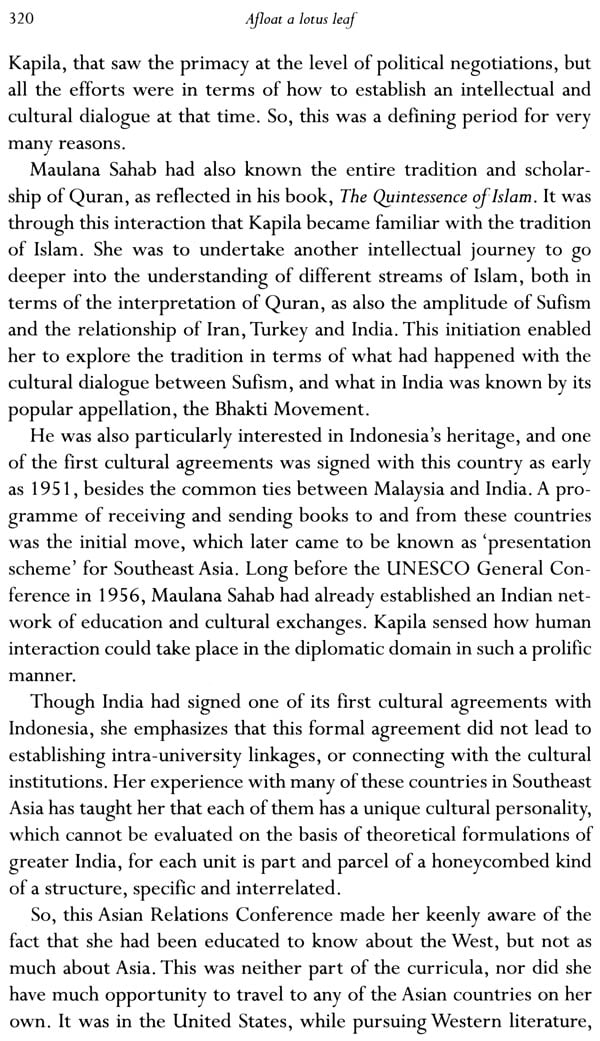 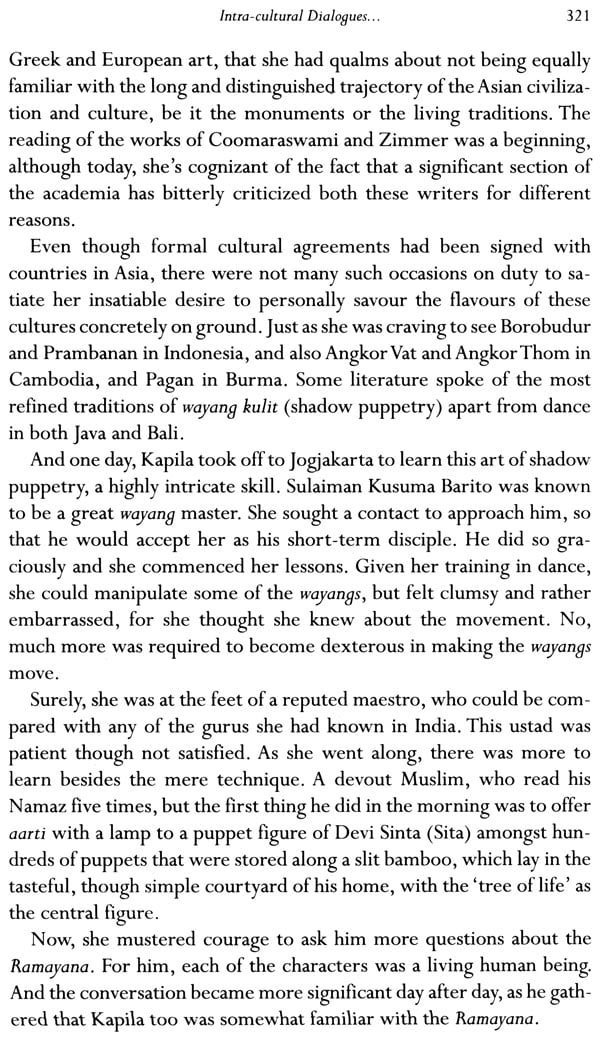 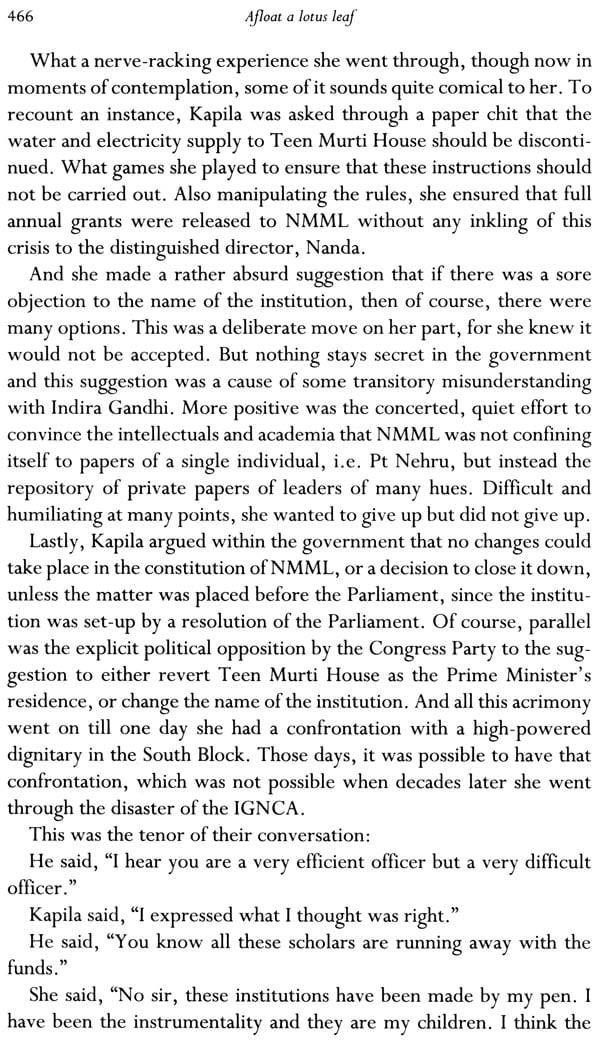 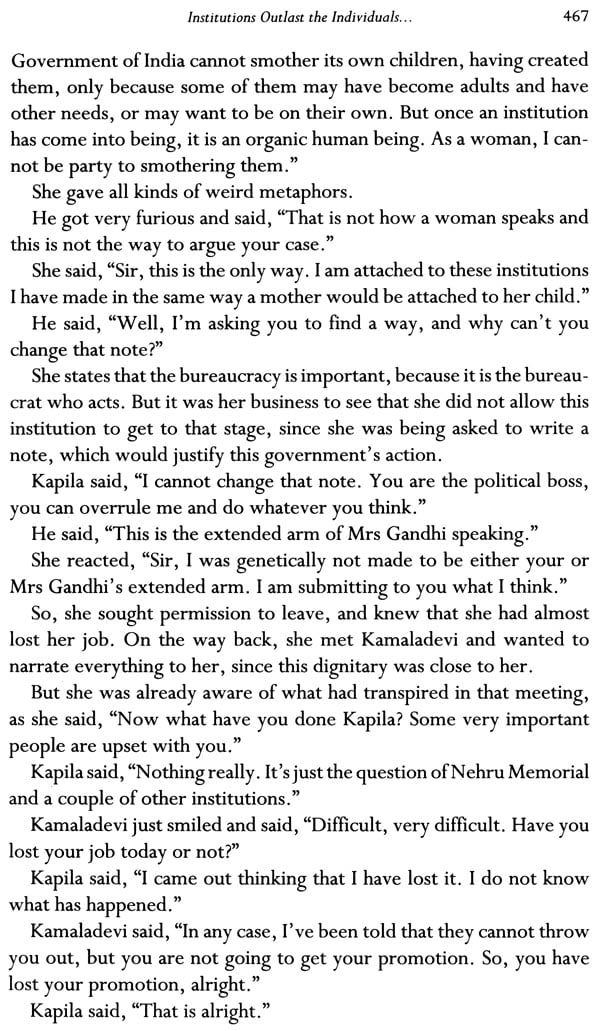 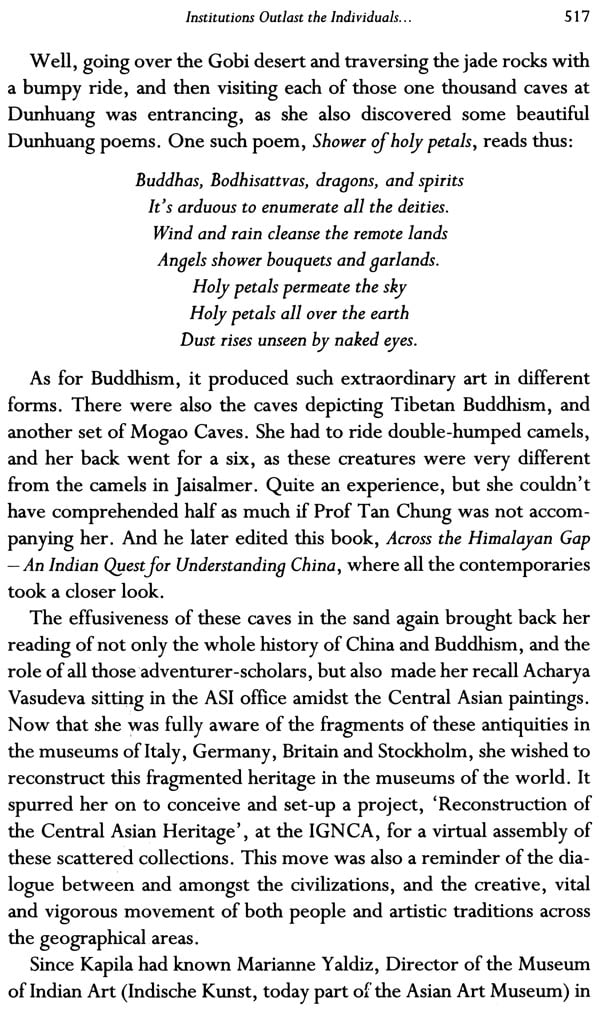 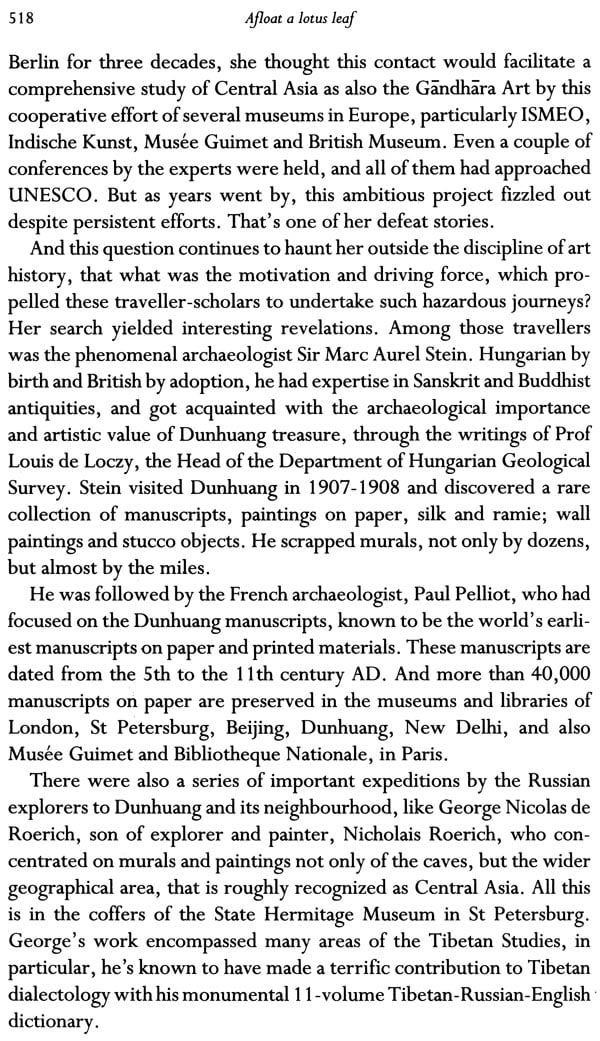 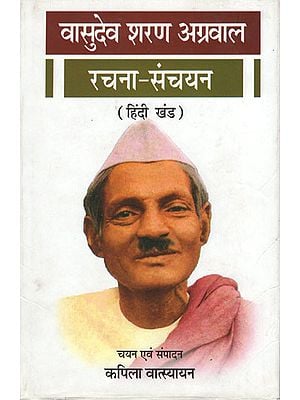 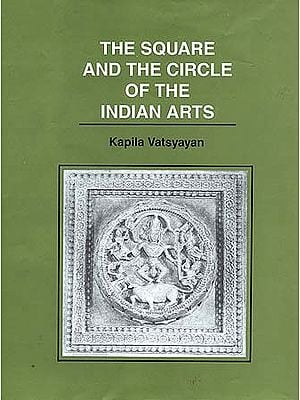 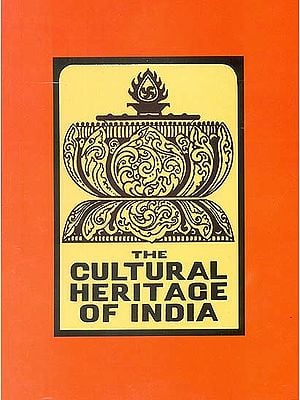 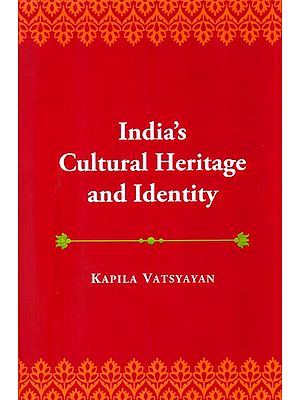 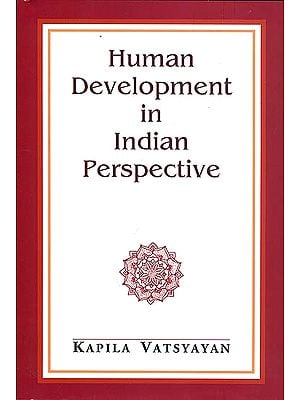 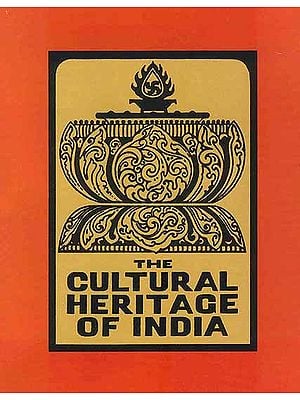