The Commentry on Bhagavan Sankaracarya' s Dhanyastakam by Swami Tejomayananda is based on his talks delivered in U.S.A. which were meticulously recorded by some sincere seekers and later on laboriously transcribed. The composition by the Acarya explains in eight beautiful verses who the really blessed people of his world are.

In the edition diacritical marks are used for Transliteration of samskrta words in verses and commentary. Non-English words have been italicised. This will help readers to identify and pronounce the words correctly.

The English plural sign 's' has been added to untranslated Samskrta words after a hyphen (-) to show that it is not elemental to the words e.g. mantra-s, rsi-s etc.

A key to the transliteration and pronunciation has oeen added in the beginning of the book.

We are pleased to bring out this book which every seeker will find very illuminating.

These eight beautiful verses were composed by Bhagavan Adi Sankaracarya to paint a picture of a blessed person Dhanya is a blessed person. Astakam is a collection of eight verses. Dhanyastakam Succinctly describes the goal (true blessedness), the means to reach the goal and the obstacles encountered on the path, as well as how to overcome them.

To chant or just to listen to the Dhanyastakam verses are exhilarating and bring great joy. Meditation or contemplation on the meaning of these verses is even more uplifting.

In our worldly life we generally consider ourselves blessed and fulfilled if we are able to complete our formal education have a good job make money, own a car or a house, and have children. If our children are similarly 'well' settled' in their lives (the definition of 'well settled' remaining the same; namely education, job money, etc), we say that our life is fulfilled and consider ourselves to be even more blessed. This is a kind of blessedness that worldly people are familiar with-a contentment that comes from having done one's duty and executed one's responsibilities.

People who are spiritually inclined may feel blessed if they have company (satsamga or darsana) of a noble person (sadhu purusah).

To have a vision of God or to serve Him is another kind of blessedness (dhanyata). In the Tulasi Ramayana, we find the Three-brother Ravana. Vibhisana and Kumbhakarna Ravana an outright enemy of the Lord was totally against Sri Rama Vibhisana was a devotee of the Lord at all times. Kumbhakarna supported Ravana but had devotion to Sri Rama in his heart. When the battle between Rama and Ravan begins (in the Yuddhakanda), Vibhisana bows to his elder brother, Kumbhakarna and describes the circumstances under which he left Lanka to Join Sri Rama When Kumbhakarna hears this, he says Dhanya, dhanya tum Dhanya vibhisana -O Vibhisana thrice blessed indeed you are that you have developed such pure devotion to Sri Rama and are ready to serve Him. Serve wholeheartedly and never look back never waiver in your devotion.

In a worldly sense, we think we are blessed if we are prosperous. However there comes a time when despite achieving all of our material objectives we still feel an emptiness a hollowness an incompleteness. Those who walk the spiritual path know that the prosperous and the penurious are equally blessed. Bhagavan Krsna says: 'He whom I choose to bless with My vision from him I take away all wealth Having acquired and enjoyed all worldly goods one should develop dispassion and understand that the world can not give total satisfaction. Thus by discrimination and dispassion one's craving for wealth should disappear.

Such dispassion (vairagya) is indeed a blessed state. But dispassion alone is not enough; a desire for knowledge is needed. An intense longing for knowledge of Brahman the absolute Reality, is a higher blessedness. Inquiry into the nature of the Self is the fulfillment of dispassion.

In Vivekacudamani, Sankaracarya describes the approach of a qualified student to the teacher and his humble request "O Svami' please release me from the bondage of samsara (the world). I am drowning in the ocean of samsara I am burning in the fire of samsara. I do not see any other way. Please save me." the teacher first assures the student not to worry. After a preliminary prayer to the teacher the disciple then asks the pertinent question: 'what is bondage? How has it come? How does it sustain itself? How can I get rid of it? The teacher replies, 'Blessed indeed are you: you have fulfilled all your duties. The student has only asked a question and has not yet realized the Self, yet the teacher commends him for fulfilling his duties. The fact that he seeks to know the Self and to be free from the bondage of ignorance is a great blessing.

The highest kind of blessedness is oneness with the Lord. Having gained Self-knowledge at the feet of the teacher, the disciple (in Vivekacudamani) congratulates himself:' 'Blessed indeed am I: I have done all that needs to be done. Today I have directly seen Brahman the most auspicious. After this realization, there is only pure love (Bhakti) for the Lord without any desire or expectation. This state of highest blessedness, this love for the Lord, expresses itself in the form of services to all and a reveling in the welfare of all beings. 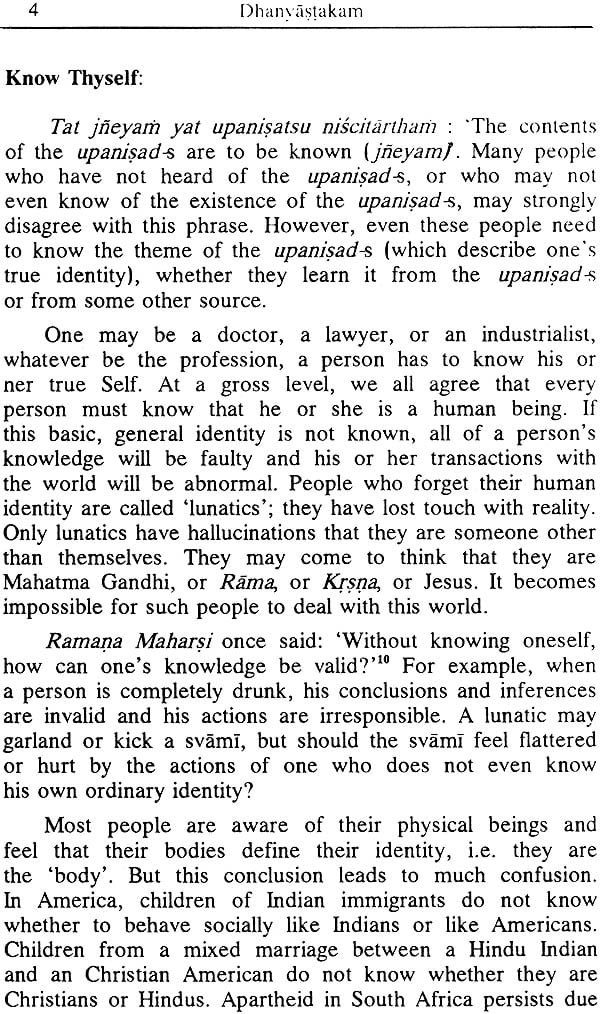 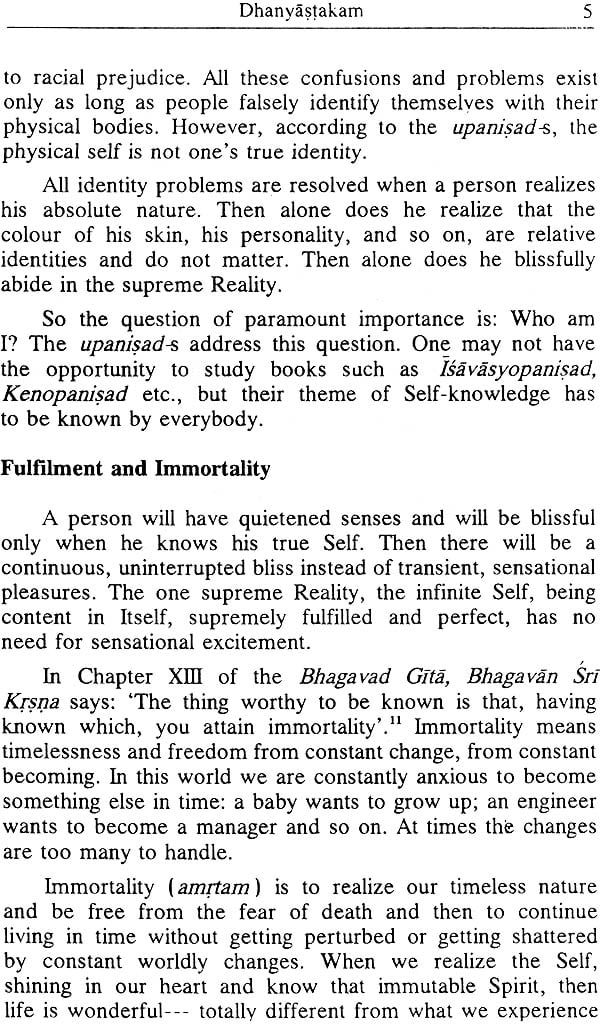 Saundarya Lahari of Adi Shankaracharya (Audio CD with Book Containing the Text in Sanskrit, Roman Transliteration and English Translation - A Combination Ideal for Both Chanting and Understanding)
$30
Out of Stock VIVEKACUDAMANI of Sri Sankaracarya (Shankaracharya) (Sanskrit Text with Transliteration, Translation and Index)
By Trans. By. Swami Turiyananda
$21
Out of Stock VISNUSAHASRANAMA with The Bhasya of Sri Samkaracarya (English Translation with Transliteration)
By Translated into English By: R. Ananthakrishna Sastry
$43
FREE Delivery