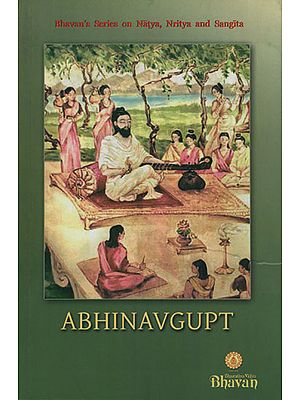 Who wants to talk with stones. Listen, O you living (lit., moving) human, I speak to you. What is this senseless chase after objects that you indulge in right from the movement you get up from your bed. If you could enter into the consciousness-abode of Siva even for a fraction of a (temporal) moment you will yourself instantly know the truth. What then is the use of these colourful presentations of mine?

Abhinavagupt, the great Kashmir polymath has left an indelible mark on our cultural traditions - specially in the fields of drama, music, literature and philosophy. His famous works include Tantralok, Pratyabhijnakarika, Abhinauabharati, Bhagvad Gita Sanqraha amongst others.

To pay tribute to Abhinavagupt in his millennium year Bhavan compiled a number of essays contributed by savants and scholars reflecting on his persona and contribution to the Indian Art and Philosophy. While our effort has been to cover as many aspects as possible, the fact remains that we cannot claim that these essays being presented in this volume deal with all aspects of his invaluable works.

We, however, hope that this book will remain a valuable part of the Bhavan's Series on Sanskrit texts that have contributed substantially to the evolution of Performing Arts, namely, the Natya, Nritya and Sangita.

This collection of essays is a tribute to Acharya Abhinavagupt by some highly eminent scholars, more to show the limitless admiration that he inspires in any soul even mildly touched by art or philosophy than to add anything extraordinary beyond his profound utterances. Abhinavagupt has been praised like Kalidasa throughout the length and breadth of the Indian subcontinent. He has captured attention more than any single author in Indian history as the range of the disciplines that he mastered and the commentaries he authored, is simply spectacular and unequalled. who has written on music, tantra, grammar, yoga and such a vast expanse of shaiva, krama and kaula darshanas with the same excellence and depth of insight, other than Abhinava?

While Abhinavagupt practised only one ashrama of life (brahmacarya), out of the four prescribed, while he spent his every breath, learning and teaching and attaining final knowledge through direct experience or svanubhuti, he fulfilled (may be not grossly) the duties of a grihastha by producing a number of eminent students as manasputras. He also performed the duties of vanaprastha and the sannyasa by living in a concentrated inner seclusion and yet disseminating knowledge through his works and his ideas not less than the greatest of the wandering parivrajakas, Adi shankara. He was by all standards a complete man.

Abhinavacarya's life radiates the completeness of theory and practice in perfect unison and with total siddhi. If he gave us the great commentaries on tantras, he also wrote about all intricate experiences that the sadhaka goes through. If he was a master musicologist, as seen in his comments on chapters 28 to 33 of the Natyasastra, he was also an adept vina player.

It is no hyperbole to say that for him every siistra that he picked became a hastamalaka, like the small amla fruit to be seen in one's palm, completely and totally at a glance, inside and out, and to be tasted and known fully through asvadana or practical experience.

Above all, Abhinava fascinates us by his most unique quality of a person who is the ascetic of the ascetics and the rasika of the rasikas. While celibate, he radiates like a rasika. In him, Shivatva manifests, not as the dust of a funeral pyre (chitalepa) but as the effulgent light of the moon- rays much like his linen clothing. We end with words in which he was praised by his adoring disciple Madhuraj Yogin appended by a translation hesitatingly attempted by us.

"In a garden of grape-vines, under a lovely and exquisite pillared roof adorned with crystal and precious stones, bedecked with perfumes, flowers, garlands, and supporting lamps, besmeared with sandal paste and a fill of incensed smoke, surrounded by yoginis and siddhas singing, dancing and playing instruments without a break, seated on a soft cushion spread out on a golden platform under a pearled canopy, with Kshemaraja and other groups of disciples, some serving him and some sitting at his feet still, waiting with great attention to write down his utterances, with two female dutis standing on his either side, carrying pots of sivarasa and betel containers in one hand and citron fruit and lotuses in the other, his eyes swinging with delight, the middle of his forehead clearly adorned with ashes, with beads of rudraksha suspended around his ears, his heavy and full hair knotted with garlands, his beard copious, his body splashed with red saffron, his neck pasted with yakshapanka, his clothes of white linen effulgent as the moon-rays, seated in the position of vira asana, with one hand placed on his thigh, wearing a rudraksha rosary and showing the mudra of the ultimate knowledge of Shiva, with his treasured-Iotus-Ieft-hand-finger-nails playing the nada vina, may the avatara of Sri Kanthesha, come to the land of Kashmira before our very eyes, the god Dakshinmuurti in the body of Sriman Abhinava, protect us with his unbounded compassion." 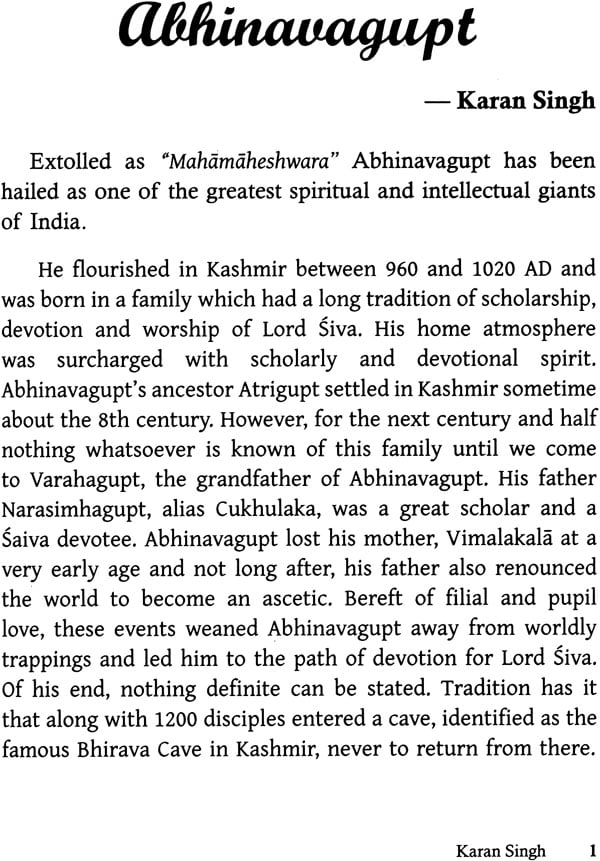 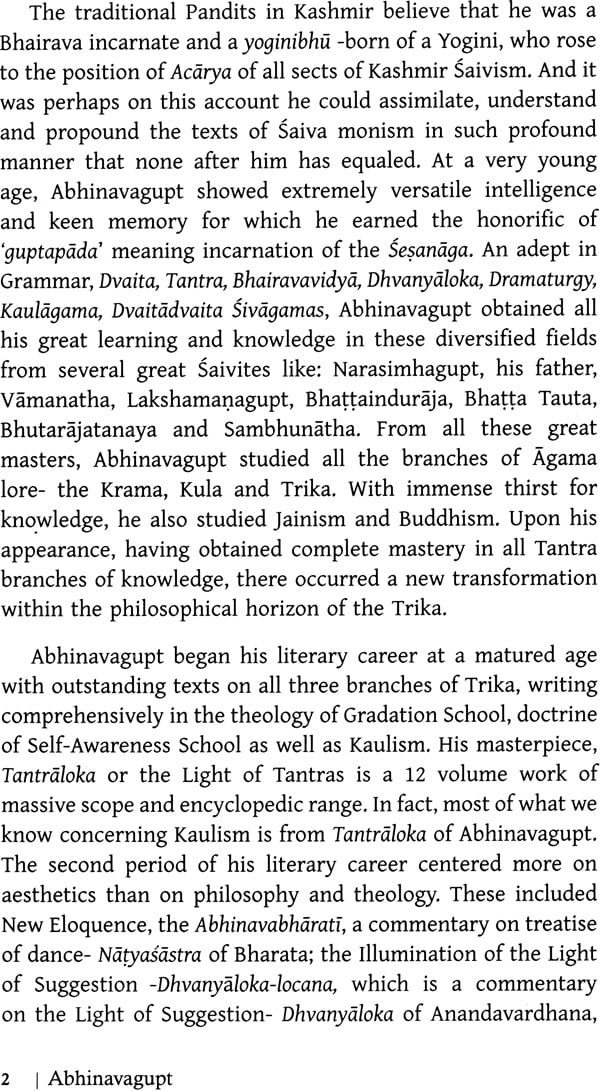 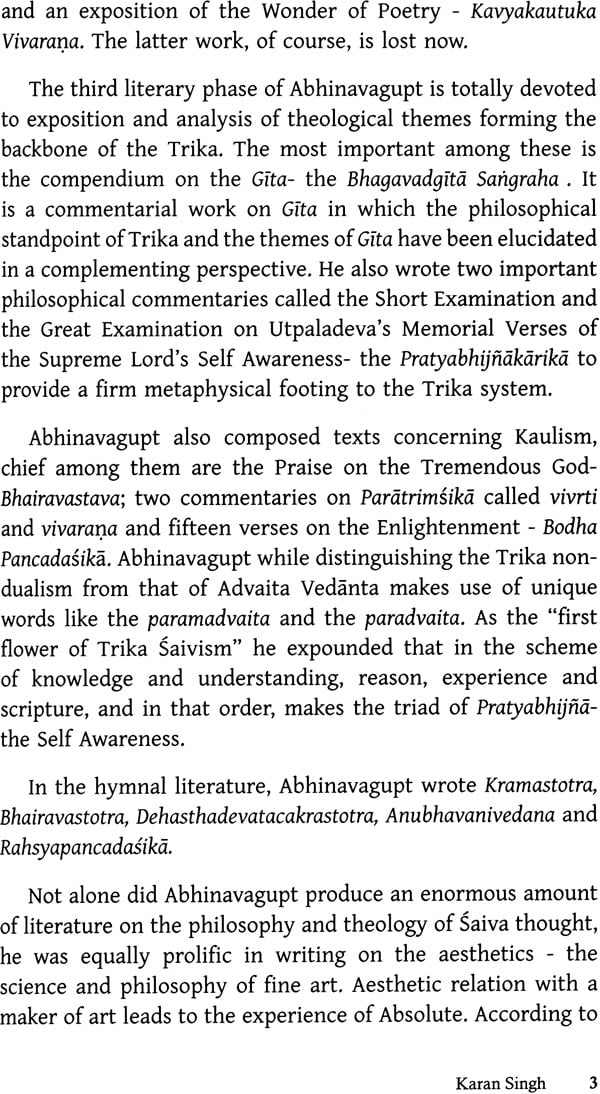 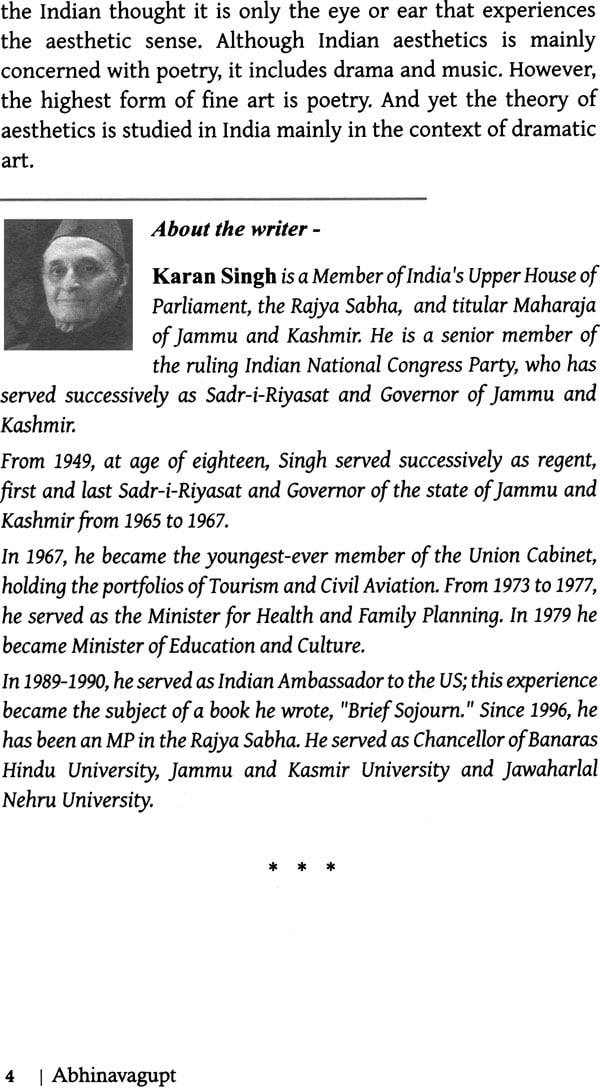 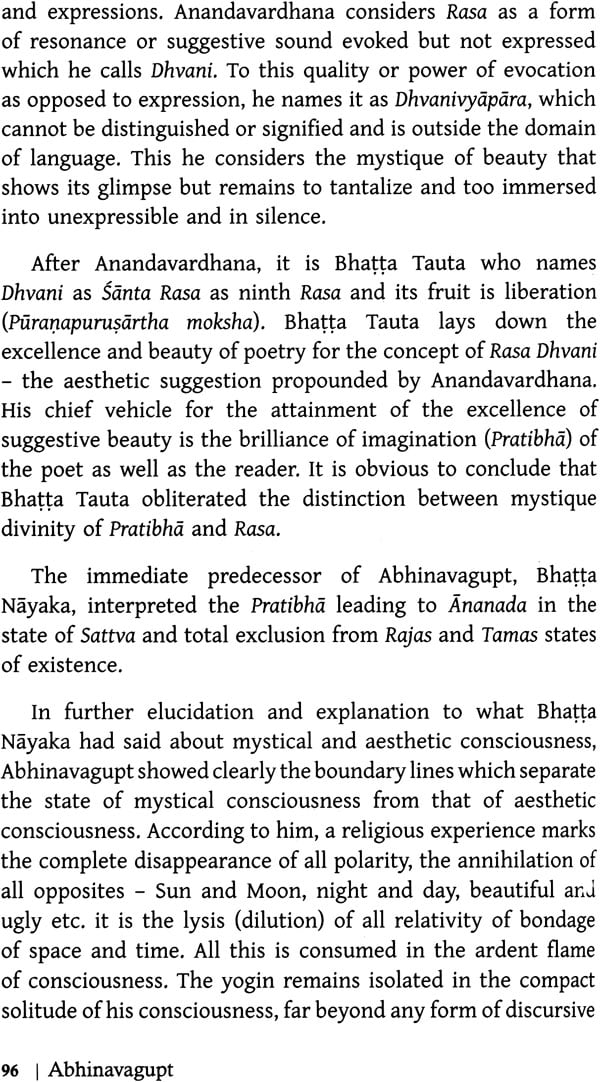 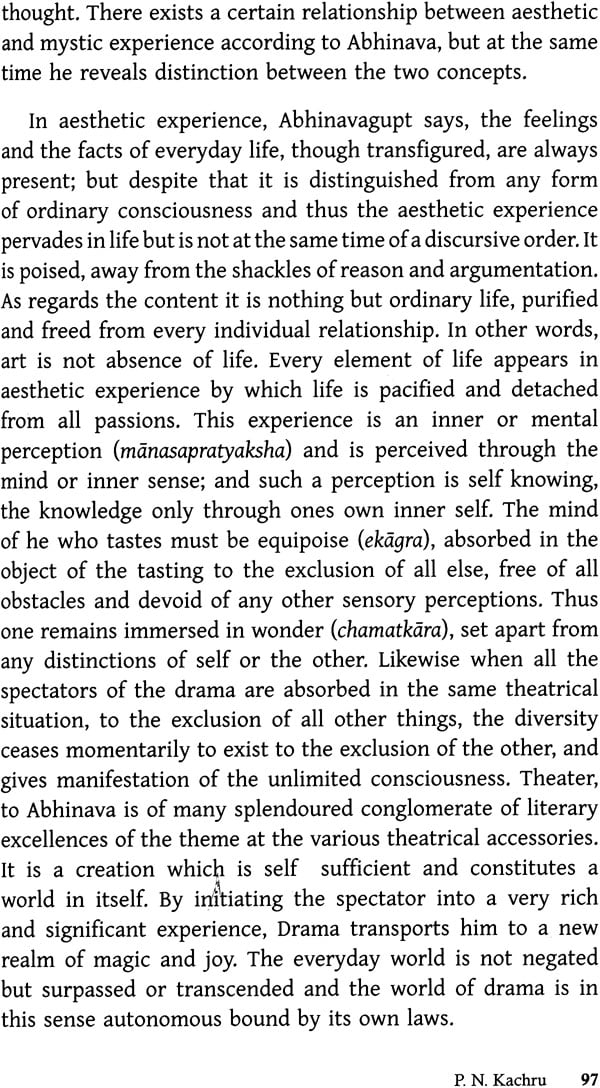 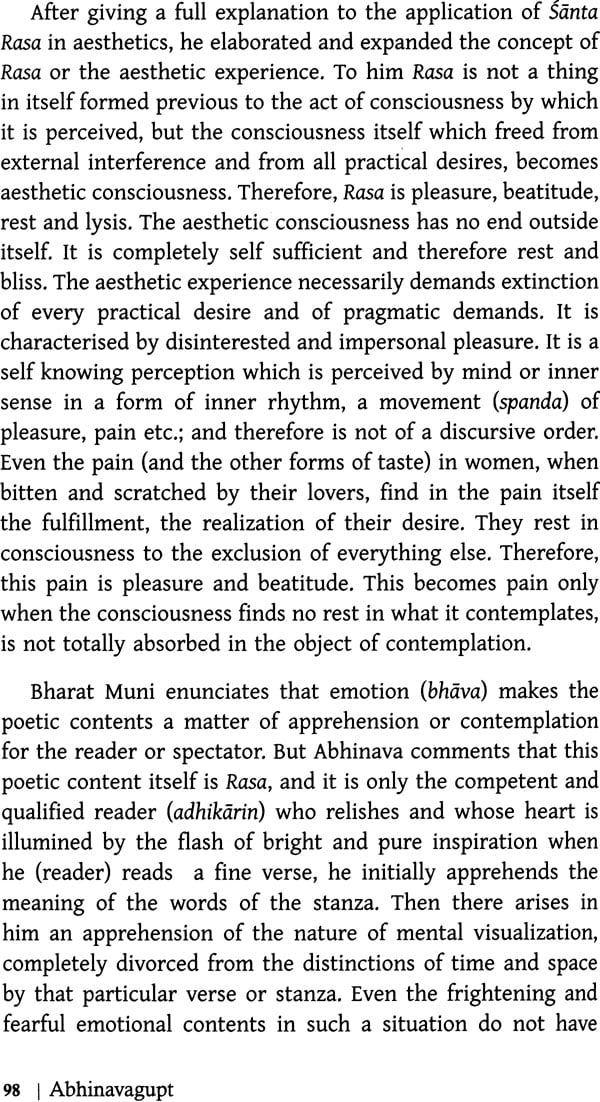 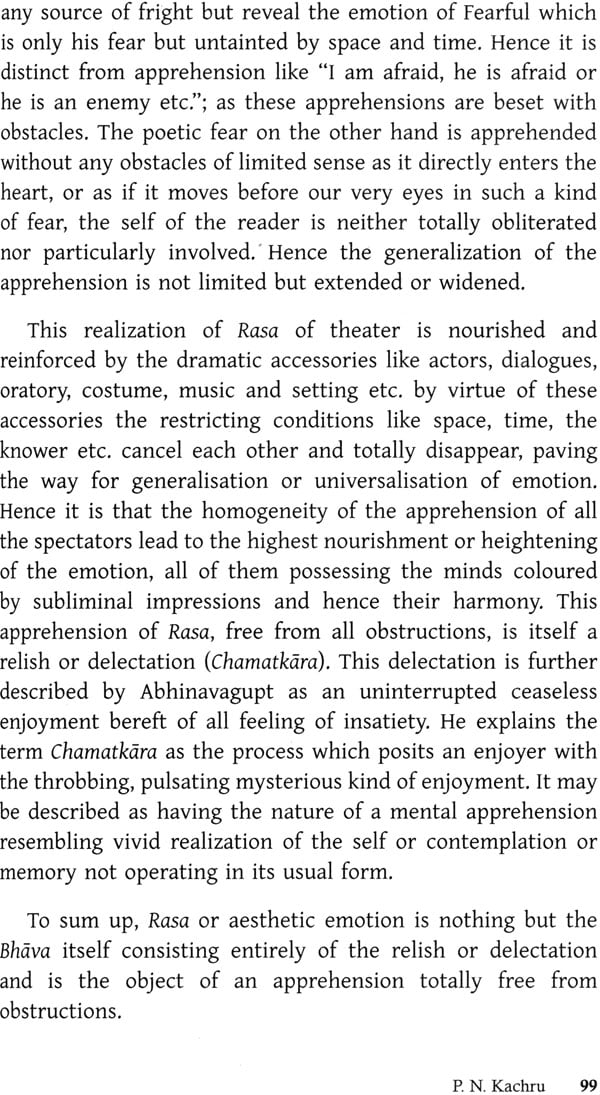 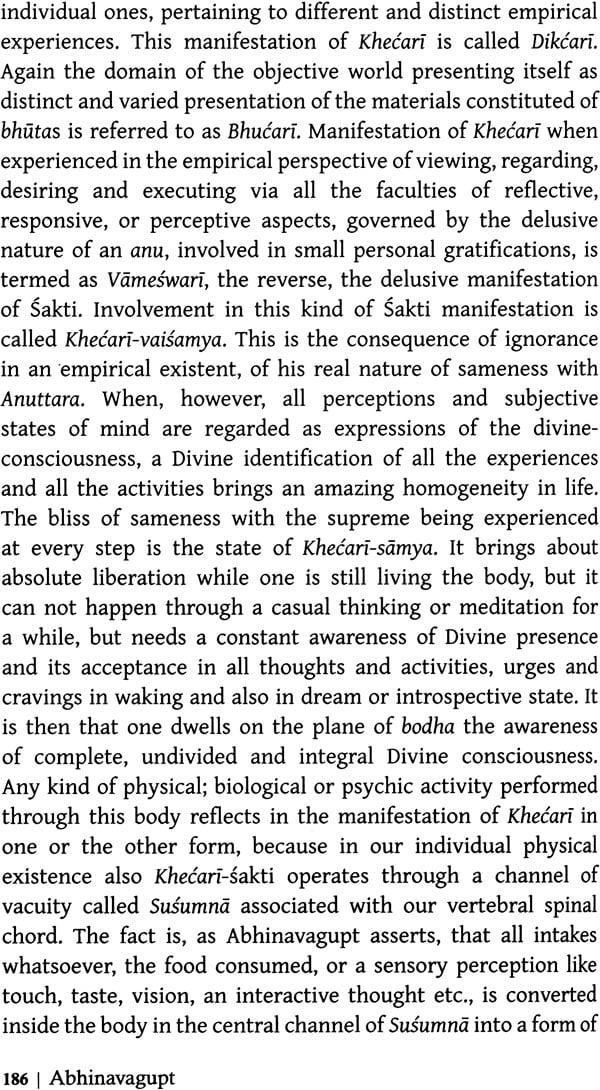 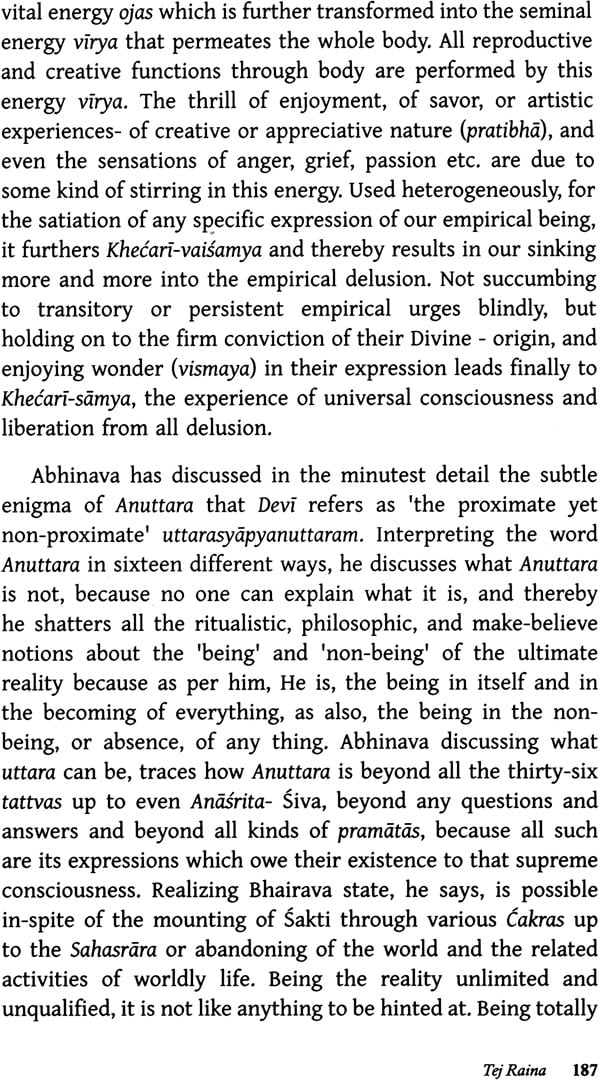 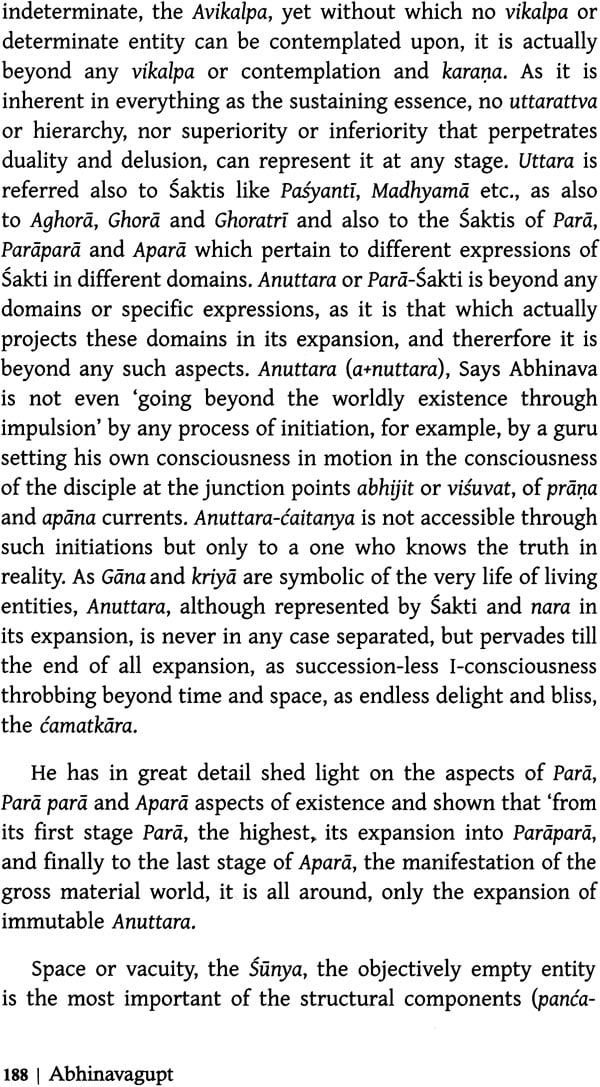 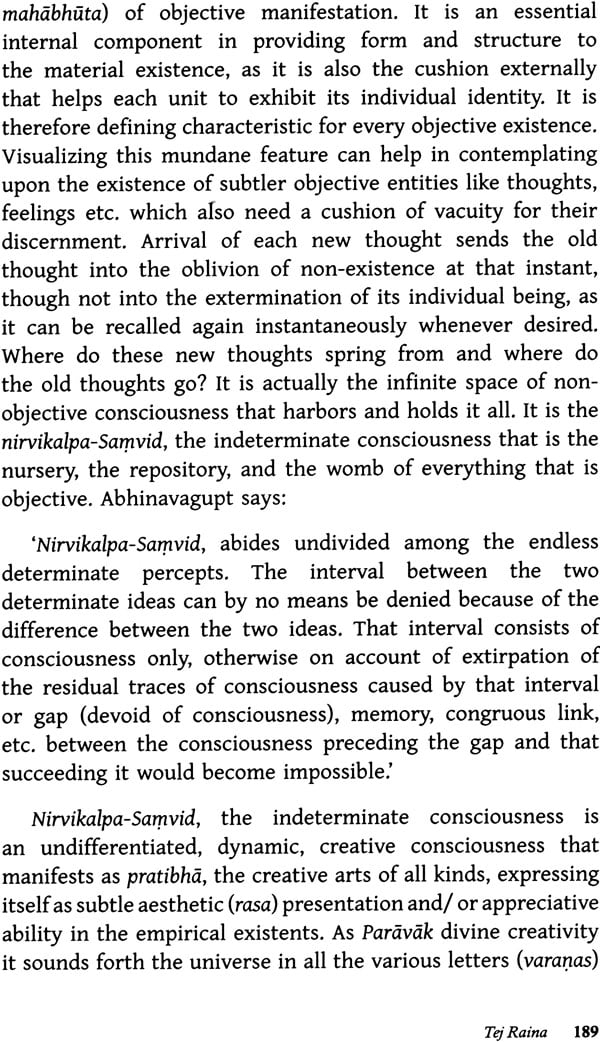 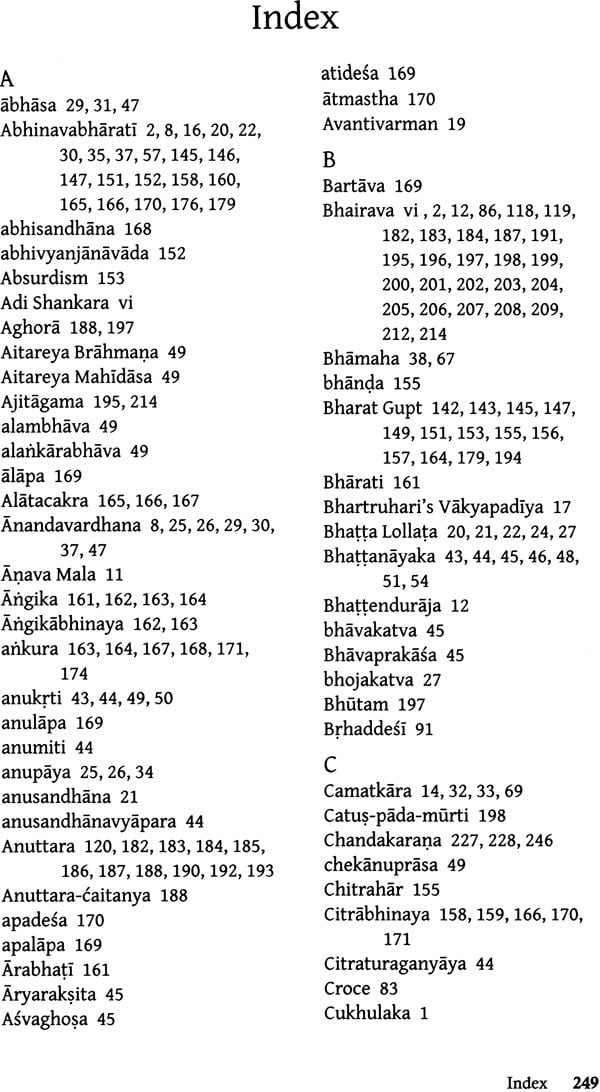 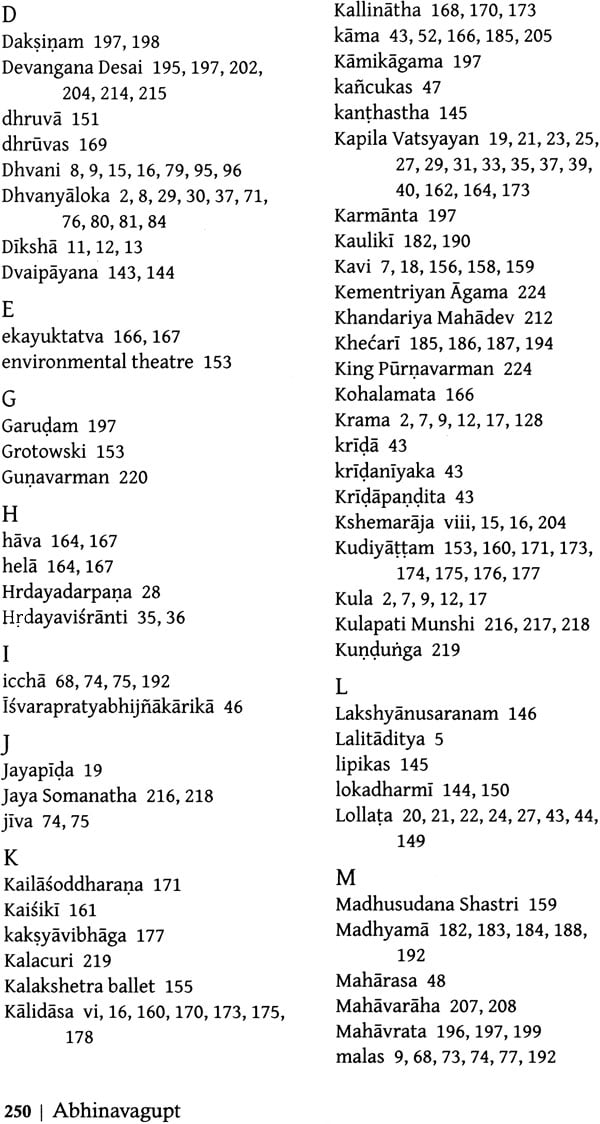 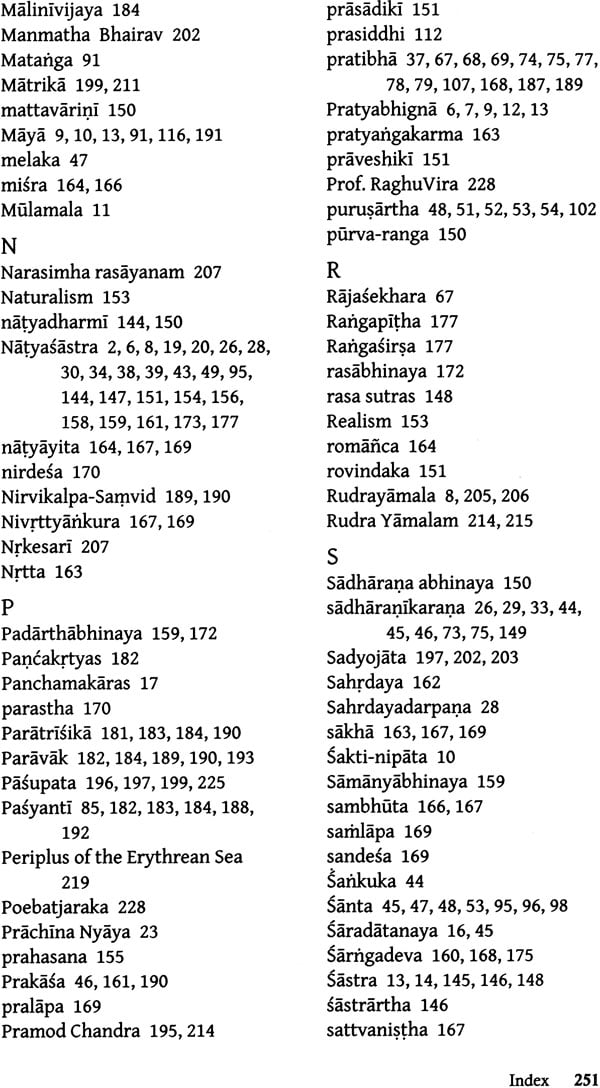 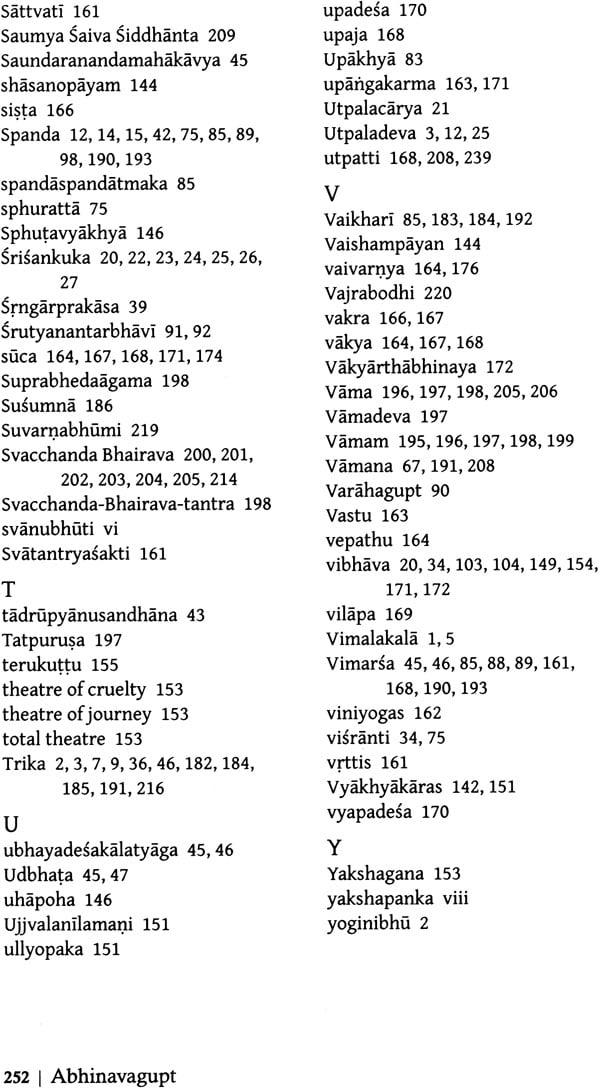 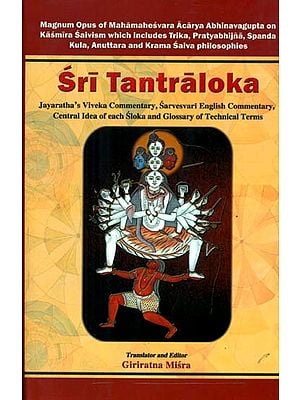 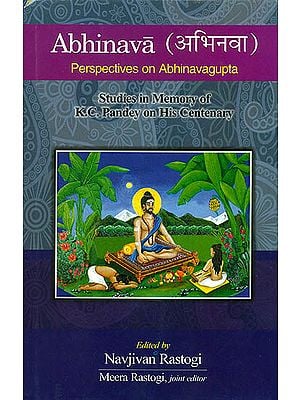 Abhinava "Perspectives on Abhinavagupta" (Studies in Memory of K.C. Pandey on His Centenary)
By Navjivan Rastogi
$89.10
FREE Delivery
$99  (10% off) 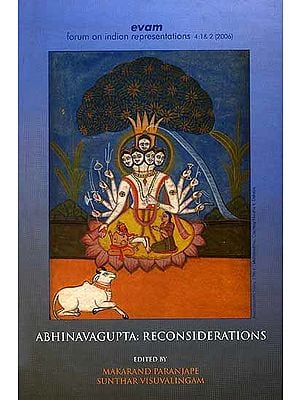 Abhinavagupta: Reconsiderations
By Makarand Paranjape, andSunther Visuvalingam
$72
Out of Stock 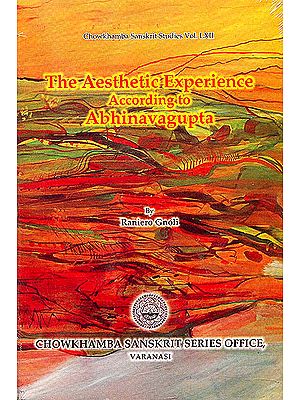 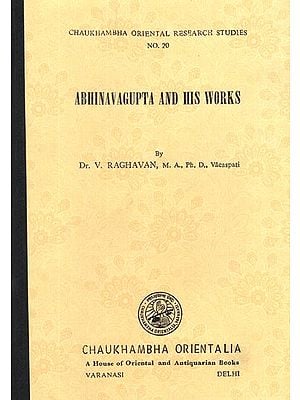